Financial technology adoption in Canada has increased from 8 per cent to 18 per cent per cent since 2015, according to EY’s 2017 Fintech Adoption Index.

This trend means that both traditional banks and fintech startups are feeling pressure to develop simpler, more transparent and customer-centric financial services products, the report suggests.

“Canadians know more about the fintech options available than they did two years ago, and this trend is going to continue,” said Ron Stokes, EY Canada’s fintech leader. “When it comes to banks and fintech, we’re seeing what used to be a competitive mindset turn into a desire to collaborate.”

However, Canada has one of the lowest fintech adoption rates around the world. Only 18 per cent of survey respondents in Canada have used two or more fintech services in the last six months, compared to 33 per cent globally.

“It’s becoming clear that working for mutual benefit, rather than competing with each other, will result in more meaningful innovations, faster,” noted Stokes.

EY finds the primary reason Canadians haven’t used a fintech product is because they likely don’t know of any. But that could be poised to change: 22 per cent of respondents reported they had not heard of any fintech, which is a lot fewer people than the 49 per cent who reported the same thing almost two years ago.

The report affirms the threat from fintech is real and continuous investment in fintech–or fintech-like products–is the name of the game for banks. 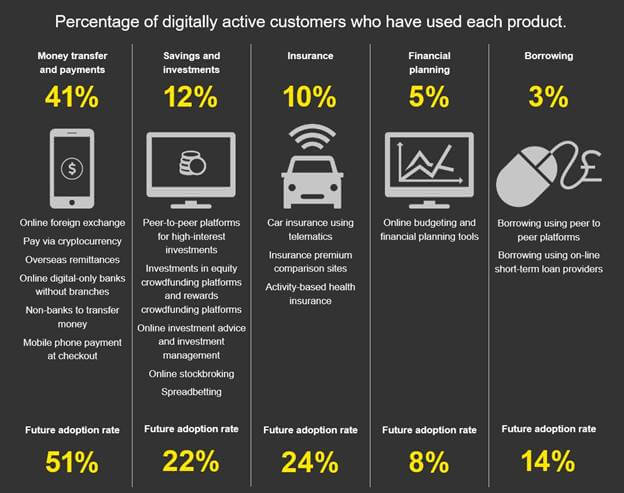 “Because of the strength of the banking sector in Canada, we’re seeing a lot of partnerships between banks and fintech,” noted Stokes. “Banks are looking for faster and easier ways to boost their digital capabilities, both on the consumer side and in the back office. At the same time, Canada’s startups need access to more customers and resources to improve their offerings.”

Banks need to be smart in picking the right fintech to collaborate with, and have strong innovation cultures to implement any new technologies, according to the report. And, on the same hand, startups need to better articulate the clear benefits of their technology and work with banks to deliver change.