Karthik Ramakrishnan says winning awards is nice but winning customers is even better.

Ramakrishnan is the CEO of Gallop Labs, a Toronto-based startup that provides a prescriptive marketing solution for app makers. It’s also one of the finalists for Startup of the Year in the Canadian Startup Awards.

This isn’t the first time in recent months that Gallop Labs has been nominated for an award. In June, Facebook recognized the startup with an innovation award.

“It’s great to be recognized,” says Ramakrishnan, but his focus is on the business.

“You can get a lot of awards but if the business isn’t strong, if you’re not building the foundation,” he says, “it doesn’t matter.”

Ramakrishnan says 2014 was a year when “many things came together.” That includes closing a $2 million seed round in December. But even with the awards and investment, Ramakrishnan says the hight point for him was the first time a trial user of Gallop Labs’ product converted into a full-fledged customer.

Gallop Labs got its start as an internal project at Toronto app-maker Bnotions.

“Once they built an app for a client, they didn’t know how to market it,” Ramakrishnan says. “Big brands didn’t know which channels” to advertise on.

He says that brands would spend months researching where to advertise an app and who to market it to – a process that took far too long.

“We just don’t have the luxury of time anymore,” he says. “You have to react quickly, especially when your business depends on it.”

The solution Gallop Labs, which was spun-off from Bnotions in late November 2013, came up with was to automate that process as much as possible.

It then provides app marketers with prescriptive recommendations about which channels they should use to promote their app, allowing them to iterate rapidly.

“So far, our product has been focused on helping big brands,” Ramakrishnan says. Among its users are The New York Times, RBC, Kobo and AccuWeather.

Ramakrishnan says being incubated by Bnotions helped open doors for Gallop Labs but that only goes so far.

“Experience gets you through the door,” he says. “but if the product doesn’t back that up, that client is not going to last.”

While big brands have been the target so far, a self-serve platform for smaller companies is currently in the works.

The next step for Gallop Labs, Ramakrishnan says it making sure it can support client success and on-board new clients quickly.

“It all comes down to product,” Ramakrishnan says. 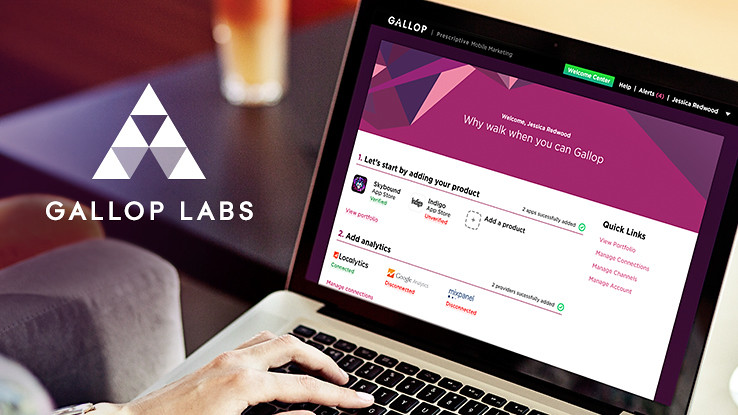 Gallop Labs has raised a seed round.

The Toronto-based company raised $2 million. The financing was led by Golden Venture Partners and Mantella Venture Partners. Other participants included Allen Lau, the CEO of Toronto’s Wattpad, who is now dabbling in angel investing, as well as Albert Lai, the CEO of London’s Big Viking Games.

The Bnotions-incubated Gallop Labs will use the funding to advance its products, which help mobile publishers acquire and monetize users.

The Toronto-based startup boasts a promising clientelle, including the Associated Press and The New York Times.

In related news, Alkarim Nasser announced today that he is stepping down as managing partner of BNotions. Moving forward Nasser will focus his time on his position as co-founder and head of product for Gallop Labs.

The CIX Top 20 was handpicked from across Canada by a selection committee of experts and the list was first revealed on Techvibes last month.

Throughout the day, 600 delegates used virtual currency to bid on the CIX Top 20 as each company presented on what makes them the company to watch in the coming year and participants saw their valuations rise and fall live on the virtual stock exchange. The Audience Choice was awarded to Gallop Labs.

Gallop Labs is a mobile prescriptive marketing platform that leverages data science and in-app behavioral analytics to help brands and mobile publishers find and optimize the most valuable users for their applications.

Gallop Labs was recently a winner of the Facebook Innovation Award for their work driving users for a leading music app.

The company was incubated by BNOTIONS, a Facebook Preferred Marketing Developer, and currently has offices in New York City and Toronto.

Outside of the Top 20 competition, CIX also honoured Vision Critical CEO Scott Miller with the 2014 Innovator of the Year Award.