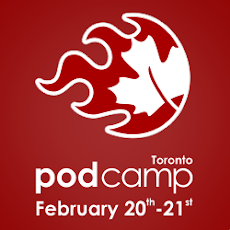 We recently got in touch with one of the PodCamp Toronto organizers to discuss this years event.  Connie Crosby is one of the great volunteers of this yearly event.  She was kind enough to answer our questions about this weekend’s festivities:

How did PodCamp Toronto first start? What was the spark behind starting this event?

We should have a look back at the beginning of PodCamp itself. PodCamp was started by Chris Brogan and Christopher S. Penn in Boston in the fall of 2006. Their idea was based on the BarCamp idea that came out of the tech sector: the idea that at the big technology conferences there was more expertise in the seats than on the stage, and that more is learned by attendees in the more spontaneous, self-organized discussions than in the formal sessions. Think an unconference where those great hallway conversations are the focus. PodCamp brought this concept to the podcasting community.

A group of Canadian podcasters from Toronto and Montreal went to the first PodCamp Boston and were inspired to start one in Toronto.  February 2007 was our first PodCamp, started by Jay Moonah, Leesa Barnes, Julien Smith and Mitch Joel (hopefully I haven’t missed anyone!).

What is the purpose of PodCamp Toronto?

Things have changed significantly since that first year. Not only have we grown from about 250 participants in 2007 to about 650 in 2009, but also our focus has shifted. The first PodCamp Toronto was primarily by and for podcasters. We have seen it grow to encompass a broader range of subjects in the area of new media, social media and social networking. We have also seen a more diverse crowd show up. We have all the way from high school students to PR industry professionals joining us. The purpose–from the point of view of PodCamp Toronto organizers–is to facilitate a time and place to let conversations from the social media community take place. So, in a large way the purpose shifts depending on what the community wants. Podcasters who have been a part of the PodCamp community over the years do work towards ensuring there is still an element of the original “how to podcast” sessions, so we have remained some of that flavour.

What can attendees expect form this year’s PodCamp?

We are expecting a larger turnout again this year. We will have enough space for everyone, but attendance in any particular session is first come, first serve. Some people decide to sit on the floor, so we suggest casual dress (I will be wearing jeans myself).

This is an “unconference” where everyone is responsible for their own learning. So, if one session doesn’t suit your needs, please get up and move to a session or discussion that is more productive for you. This is the “Law of Two Feet” principle that is one of the foundations of PodCamp.

I also strongly urge attendees to bring their own refillable water bottles and travel coffee mugs. We will be bringing in coffee and tea. But, it can be dry over this weekend, so taking water into sessions is a good way to stay hydrated.

Anything new or interesting at this year’s PodCamp Toronto?

I am excited to see more citizen engagement-type sessions this year. We have volunteers from CrisisCamp, ChangeCamp and NoProrogue.ca who have signed up to speak. I can’t wait for their ideas to cross-pollinate with PodCamps’!  Also, the industry podcast Inside PR will be recorded live during one of the Saturday morning sessions. And speaking of podcasting, some of our community have taken up the idea of the “PodCamp 5”, a series of basic podcasting sessions conceived of last year by Montreal podcaster Bob Goyetche and will be presenting some of the sessions in this series.

From the volunteer organizing team, we have put together a lounge supported by our sponsors where people will be able to continue on their discussions, play video games, and catch up on the Olympic action.

Saturday night we will be holding an informal pub social and an open mic/sing-along evening. We will be announcing the location at the last minute, most likely via email to registrants, so we encourage anyone wanting to attend to sign up on the registration page.