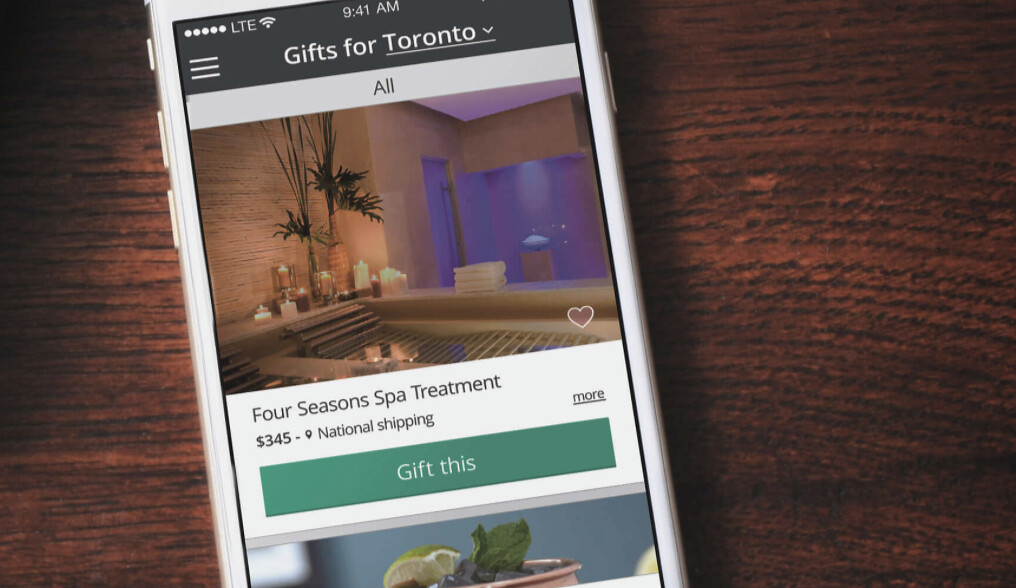 Receiving a gift is a timeless joy. It’s the kind of thing no disruptive technology can ever add to or take away from.

Giving a gift, on the other hand, can be struggle. Going to a store, or even buying a gift card online, is racked with annoyances.

“I thought it’d be cool if it was really easy to send a thoughtful, physical thing to somebody using my phone,” says Jason Reid, CEO and co-founder of Giftagram, a gifting service that launched in Toronto in 2013.

The desire to send a gift using only a phone is what propelled the company from the get go, and that mission hasn’t changed since day one. Though the mandate is simple, it has its own set of challenges. Perhaps the primary issue is no one keeps their friends’ or loved one’s physical address locked in their mind anymore. To deal with this problem, Giftagram only needs the email address or the mobile phone number of who is receiving the gift, which is inputted in the app, and the company takes care of the rest.

Giftagram signifies a broader change in not only the way people send gifts to one another, but people’s relationship with consumer goods overall. Though the startup is only a few years old, there’s already been a noticeable shift in the way people interact with their shopping.

“We were still early in mobile commerce. When you look at the market data, mobile has become a significant part of commerce. It’s significant and there’s definitely a shift happening there,” says Reid.

Giftagram has been able to capitalize on this shift, as well a shift in the in the acceptance of intermediary distribution by national brands. The app is also a player in helping smaller, local retailers figure out an ecommerce and mobile distribution strategy. Partnering with these brands allows Giftagram to hold no inventory, and offer high quality merchandise for a similar price that a consumer would find in a store, making their profits on commission.

“We never aspired to carry inventory. We look at ourselves as a technological solution product. A big part of the impotence of the model was not just solving the problem from the consumer perspective, but it’s also becoming more apparent that retailers and brands are becoming more open to third party distribution channels,” says Reid.

In February, Giftagram received $3.2 million in funding. That round of funding will be invested in improving Giftagrams user experience, which has been paramount (the whole point of the product is it’s easier than going to a store). Another channel the funding will be funneled into is growing Giftagram’s user base.

Giftagram launched in the US with a whole slew of different retail brands and partners in December. In the first two years, Giftgram has operated in Canada but by taking its first steps into the southern border, Giftagram is looking to expand faster than ever before.

The app has built a strong user base in Canada, and has a high rate of return users. Reid hopes that kind of success will follow Giftagram south.

“Now we’re one of those Canadian companies that’s trying to replicate that in the US, with proportionally larger success,” says Reid.