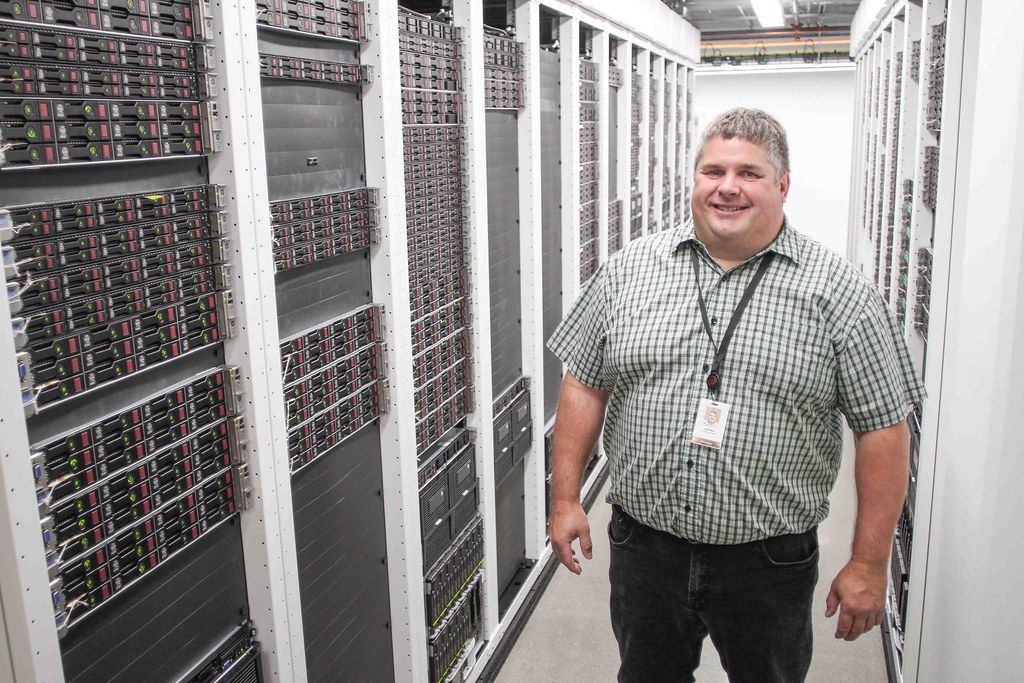 The aisles of servers surrounding Duff Reid are full of hot air, but the man himself only speaks in facts.

On the second floor of Global Relay’s one-of-a-kind data centre, the COO and co-founder of the company, explains the firm’s revolutionary method used to cool all those servers.

One side of the custom-designed building contains three storeys of louvers that can take in 150,000 cubic feet of air per minute (CFM)—enough to fill a five-foot deep area the size of a football field.

If the servers are hot enough, pumps supply water to cover walls of an evaporative cooling pad media, which the incoming air passes through.

When the air moves past the saturated media and the water subsequently evaporates, the air gets cooler.

“It’s the world’s oldest cooling technology,” says Reid, adding that it doesn’t even take a great deal of water to work.

It’s so simple, Egyptians and Persians used the technique to cool some of their buildings thousands of years ago. Unlike the ancient evaporative methods, all of the centre’s air flow is controlled by fans, vents and dampers that are automatically steered by temperature and air pressure sensors. The system responds to the building’s needs, conserving as much energy as possible.

“We think of it as complex controls running very dumb systems,” Reid says.

And although the evaporative cooling system is one of the more lauded aspects of the design, Reid says it’s not even in use most of the time.

That’s because it’s only one facet of the $24 million building that keeps server temperatures down. Situated in the coastal climate of North Vancouver, the structure only needs cooling on the hottest of days.

“You couldn’t do this same data centre in Burnaby even,” says Reid.

The building’s location is no coincidence. Global Relay and the project engineering team knew during the planning phase that strategically choosing a location was as important as the structure itself.

However, anyone locating a data centre in Vancouver area must realize its place in an earthquake zone.

To accommodate a big shake, all of the servers are on seismic isolation platforms that allow servers to safely shift while the building shakes around them. Thankfully, if there ever was a quake large enough to defeat these measures, all of the company’s data is mirrored on its Mississauga site.

It was Global Relay’s obsession with redundancy that motivated the firm to take control of the design and construction of their own data-centre in the first place.

And that attention to detail shows in how the firm has made the building repetitive in so many more ways.

Everything in the centre—from cooling system components to the power structure—has redundancy built in. Even the backup generator has a twin in case of failure.

To complement such thorough data security, the advanced design has also emphasised scalability.

A full year into the centre’s operation, three concrete beds lay available for more diesel backup generators to support future energy demand. Only one of four server phases is complete and at about 70 per cent capacity, with three more waiting to be filled as needed. The revolutionary data centre changes everyday, scaling quickly to adapt to Global Relay’s customers’ needs.

Standing in a server aisle, Reid hesitates to guess what their data capacity is at the moment.

He settles on “petabytes” as his answer. And while the concept of success is just as difficult to pin down as those growing data numbers, Global Relay’s state-of-the-art data centre is all the measure this company needs.

The company will be hiring at the Techvibes Tech Fest on September 18 in Vancouver.