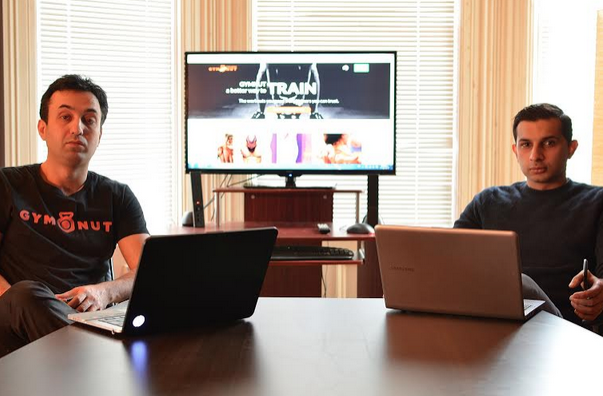 We’re all accustomed to scrolling through our Instagram and seeing pictures of our fitness enthusiast friends at the gym; for many people, these pictures are a source of inspiration to get fit themselves and discover creative ways to work out.

They are the co-founders of Gymnut, an “iTunes of fitness” app that targets gym trainers and fitness enthusiasts. Users can follow trainers that inspire them, go to their “workout store” where they can purchase published workouts based on individual goals (which start at 99 cents) and users can even request customized workouts and meal plans from trainers. They also offer free workouts from trainers that can be unlocked by sharing with friends.

“Basically, the app is a fitness and social marketplace that revolves around fitness models, bodybuilders, trainers and coaches,” Nambakhsh says. “It’s for people from all walks of life to come in, get inspired by these people and to engage with them.”

Though they started developing the app two years ago, they came across challenges along the way that forced them to pivot the way they would present Gymnut. Initially, making a consumer-friendly product wasn’t their first priority, and their focus was to develop the app for gyms and their trainers as a large majority of gym members didn’t buy into plans or services. Though many gyms expressed interest, negotiations were slow and the needs of every gym were slightly different, so they decided to focus on individual trainers and consumers.

“Typically when people think of working out, it’s either ‘I have to find the workout so I know what I’m doing’ or they get training from an actual trainer, but there’s no in-between,” Ahmed says. Nambakhsh adds that they are empowering the trainers who use their platform to build their online presence and create their own brand.

“When you go through the gym, gyms get some of the cut and trainers aren’t always the ones who get a financial benefit,” Nambakhsh says.

As their backgrounds aren’t in creating software – Ahmed is a PhD candidate in Biophysics at the University of Ontario while Nambakhsh has a PhD in biomedical engineering – they basically learned everything, from coding, marketing and actually learning how to run their own business, all from scratch. But they found that some of the skills they learned while doing their PhDs, which including being able to do extensive research to solve a problem in society, helped them along the way.

Their main sources of mentorship included BizInc (now known as Propel), the business incubator at Western University, and TechAlliance, a London-based incubator. After receiving grants and funding, mainly from the Ontario Centres of Excellence, they’ve raised about $80,000 in grants and funding.

Since they launched their beta version in January, they’ve had 100 trainers from all over the world sign up before they launch their app to the public in the next few months. During that time, they’ve studied the market and worked with trainers to find out how to give people the best value for the app and they hope it will disrupt the way people use their fitness technology.

“When you look at our social side, it’s like Instagram, but in the end we are an e-commerce platform which differentiates us from other free apps,” Nambakhsh says.

Though they understand the hype behind wearables and tracking for fitness, Ahmed feels that they address the social side that is missing from other solutions. “When we explain to people what we’re doing it’ a little out there,” he says. “But when you make it in terms of trying to make online training easy, that’s what we do.”