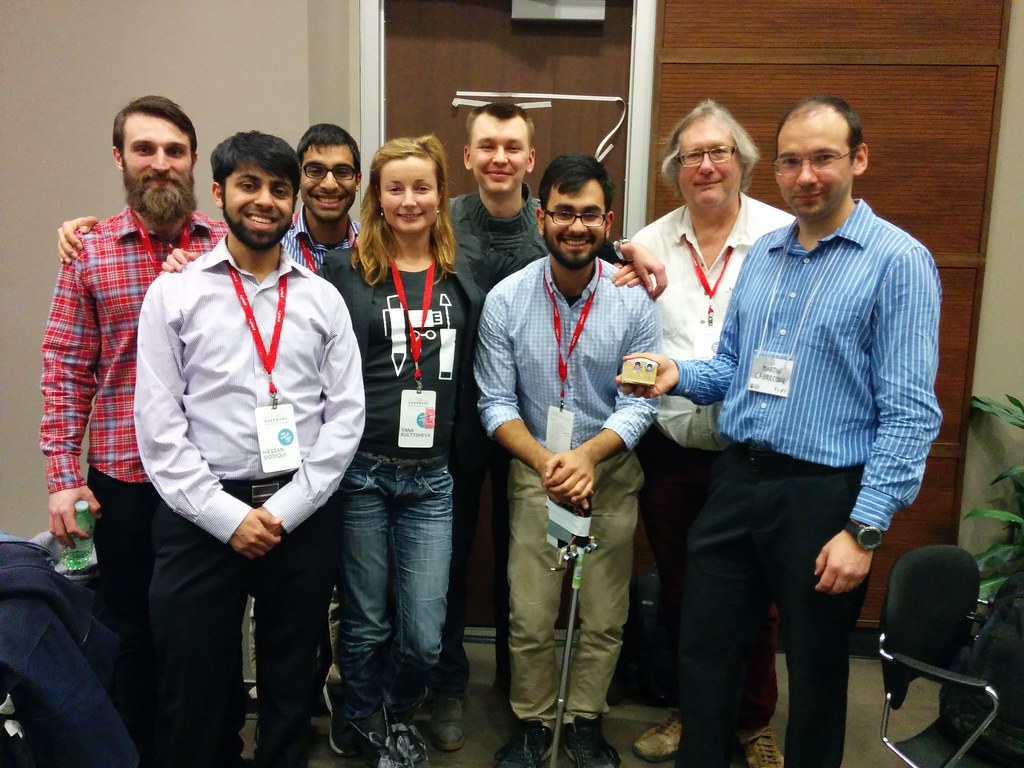 Hardware may not be the first thing that comes to mind when one thinks about hackathons, but this weekend’s hackathon, hosted by manufacturing solutions service company PCH International, showed that there’s a lot of potential in the hardware startup business.

The company has had hackathons in cities like Dublin and San Francisco, but this was their first ever in Canada.

Over the course of 54 hours, about 14 groups at the MaRs Discovery District in Toronto were tasked with creating a prototype and making a case for why it is viable. They were given access to materials and 3D printing, coaching on pitching from mentors in the hardware and design industry and panels discussions with people from the hardware tech industry. Of course, there was also a lot of pizza.

“PCH has traditionally worked with Fortune 500 companies on manufacturing, but over the past two to three years, we’ve been working with startups,” said Katherine Hague, the organizer of the hackathon and co-founder of ShopLocket, which was recently acquired by PCH International. “For us, this event inspires entrepreneurs in different cities and not only tells them what services we offer, but what avenues they can take to make this real.”

The room was buzzing with activity on Sunday night, the final night of the hackathon, as the groups made last minute changes and additions before pitching started at 5pm. Each group had three minutes to pitch, along with two minutes of questions from judges. There were many creative ideas including ThunderSteps, a shoe that generates power to charge a user’s cell phone as they walk, and Sidekick, a bracelet that transmits a patient’s medical history to paramedics or their doctor.

In the end, only the products that the judges felt would be most viable eventually won out. The third place prize, which included a year-long membership to the Toronto tool library, went to a rather unique team – a father, Vikas Nath, and his two children, Artash in grade two and Arushi in kindergarten. They created the Galactic Bot, a cardboard box composed of a CD-ROM, sensors and Arduino which, when pointed at bright objects like stars, could teach children about the colour spectrum and temperatures of the stars. Since hotter stars are younger stars, children could learn about their age.

For Vikas, joining the competition wasn’t about winning. It was about showing his children that anything is possible, and hopefully inspiring others to also bring their children to hackathons. With no TV in their household, his family bonds through science, technology and astronomy. “I think one thing which is common between us and our ancestors is the sky. We’re all seeing the same night sky,” he says. “No kid says they want to be an app maker. They say they want to be an astronaut, but they lose that idea when they grow up. We don’t want kids to lose that.”

The second place prize, which also included a year-long membership to the Toronto tool library, went to Alfred, a smart cane attachment targeted to seniors that tracks their health and activity data, and notifies an emergency contact by cell phone if the attachment detects that they’ve fallen. Rather than have seniors buy an entirely new cane, the device can be retrofitted onto their current cane.

“Seniors have a very different view of technology so when they’re using things like Philips Lifeline, they don’t want to show people that they’re fragile and need help,” said Shahid Mawji, who thought of the idea with his roommate Dhruv Guliani. “Plus, they like their walkers and canes.”

The first place prize had the most benefits. It included $4,000 from PCH towards further development of their product, as well as $4,000 from engineering firm Connected Labs. They also received a week’s worth of co-working space at DMZ, five hours of mentorship time with DMZ experts in residence, a feature in the DMZ blog, a consultation with Herscu & Goldsilver and the opportunities to pitch their products at the Tech in Motion meet-up and the We Are Wearables event.

That attractive prize went to Enlightli, the group that created a helmet that includes an LED light powered by human heat. The idea was inspired by Dhrumil Mehta visiting family back home in India and finding many of them lacked access to electricity, and that cycling, a common form transportation, often resulted in deadly accidents because of a lack of visibility. Their pitch included their hope to gain capital through crowdfunding, as well as a “One for One” business model, where one Enlightli bought by someone locally would have Enlightli send a helmet to a developing country.

“We’re shell-shocked. We didn’t expected to win and we just came for the fun of meeting people,” said Timothy Manas, a software developer who admitted he was at first skeptical of Mehta’s idea.

“It’s like taking all the fun, frustration and sleepless nights of the startup over a one-year period and cramming it in one weekend,” Jadish Bajaj added.

Though they’re still letting the success sink in, they know there’s still work to do. With their money, Mehta says they’re definitely going to do more research. “We want to see what material we can use to make this as cost-effective as possible. No one will be willing to buy a material that’s $600, that defeats the purpose of catering to rural villagers and a local market.”

And part of the challenge will be continuing to prove that their product is viable to future investors, said team member Sowad Al-Mughni. “VC funding in hardware is generally very low. So it’s a challenge, and that’s why we’ll have to create a very compelling product so that VC’s understand that we are a great team with a great product that can make a difference.”