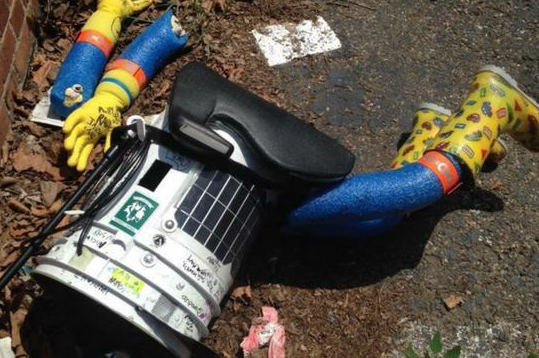 Hitchbot, which last year successfully travelled 3,700 miles across Canada over three weeks with the help of human kindness, was destroyed recently in Philadelphia while attempting to repeat its feat in the US.

Conceived in Ontario from the minds of Dr. David Smith of McMaster University and Dr. Frauke Zeller of Ryerson University, Hitchbot started its trek like any human hitchhiker would—but there was never a guarantee of its survival; people could ignore or destroy it.

In 2014, Hitchbot blogged, tweeted, and instagrammed its adventure from Halifax to Victoria. It was later courted for events around the world and made stints throughout Europe.

The gender-neutral robot, built from scraps, was not an imposing figure at 3.5 feet tall and 15 pounds. The GPS-infused, voice-recognizing bot gained a strong social media following during its adventure.

Photographic evidence of the vandalized robot exists, but its location cannot be tracked due to its dead battery. It is unknown who destroyed Hitchbot or why.