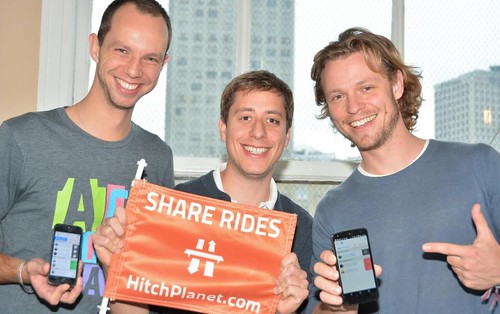 Asked to compare his ride-sharing startup to Uber, HitchPlanet founder and CEO Flo Devellennes began by explaining how his company fits into the “sharing economy.”

“Our definition of the sharing economy is when you’re sharing existing resources,” Devellennes said during an interview at HitchPlanet’s office in downtown Vancouver. “By filling empty seats in cars, that’s exactly what we’re doing.”

Founded in 2010 as HitchWhistler, HitchPlanet is behind a long-distance carpooling platform for trips covering a minimum distance of 50 kilometres.

“We’re not creating a supply for something that doesn’t exist,” he added. “There’s already millions of empty car seats going every single day to work or between cities.”

Over 13,000 people have signed up to use the website, which currently sees drivers and passengers sharing five to 10 trips a day, mostly in British Columbia, Alberta, and Washington.

Uber’s a bit different, “because their drivers, first of all, make money,” Devellennes explained. “Our drivers don’t. Second, they drive people around like a taxi service.”

On November 1, HitchPlanet will launch native apps for Android and iOS. The mobile apps will allow users to receive push notifications for booking requests, updates, and messages.

“That’s really going to help people organize rides while they’re on the go,” Devellennes said. “It’s going to change the way they use our product, because obviously you’re travelling and using it.”

According to Devellennes, the apps will initially be “super simple.” Eventually, HitchPlanet plans to add features that take advantage of smartphones’ built-in GPS.

“We can do cool things like exposing people’s phone numbers once they’ve been confirmed on a trip, so at the touch of one button you can call them or send them an SMS text message,” Devellennes said. “Down the line, we’ll be able to do really nice things like tell you when your driver’s arriving and when they’re on their way.”

On HitchPlanet, drivers post their trip plans and set a price for their empty seats. The company tacks on a 15 percent booking fee. Passengers pay by credit card, while drivers receive funds via Interac or PayPal.

“We don’t impose a price, but we cap it, just to make sure that drivers don’t make a profit,” Devellennes said. “Because this is all about sharing costs.”

A matching system connects drivers and passengers headed the same way. So far, trips between Vancouver and Whistler, Kelowna, and Seattle are the most popular.

“Initially, it was really just about helping people go to Whistler for the ski season,” Devellennes said. “As the product grew and evolved, now it’s basically for anyone needing a ride anywhere. Vancouver to Whistler is still our bread and butter. It’s the route that most people use. But we’re starting to see people use it to go home for the weekend to Kelowna or go for the weekend to Seattle for a festival.”

Devellennes noted that over 100 people used HitchPlanet to get to the 2015 Squamish Valley Music Festival in August. He has even seen trips posted for Charlottesville, Virginia, to Vancouver; Toronto to Calgary; and Vancouver to Lake Tahoe.

Earlier this year, HitchPlanet closed a round of angel funding. That allowed Devellennes to hire a development manager and couple of mobile developers to join the team’s software engineer. HitchPlanet is currently looking for a social media and community manager, and is planning to expand its marketing efforts to Ontario and Quebec.

Devellennes asserted that HitchPlanet’s brand of ride-sharing will have three positive impacts on the world.

“We help people save money and travel cheaper, but we also help connect cities and towns that don’t necessarily have public transport. That’s the first thing,” Devellennes said.

“The second social impact is making people meet in the real world, because more and more people feel isolated now due to technology. The technology we’re building is facilitating people meeting in person, which we believe is a really good thing.

“And the third is the environmental factor. By increasing vehicle occupancy, down the line, we help have less cars on the road, which in turn reduces carbon emissions.”