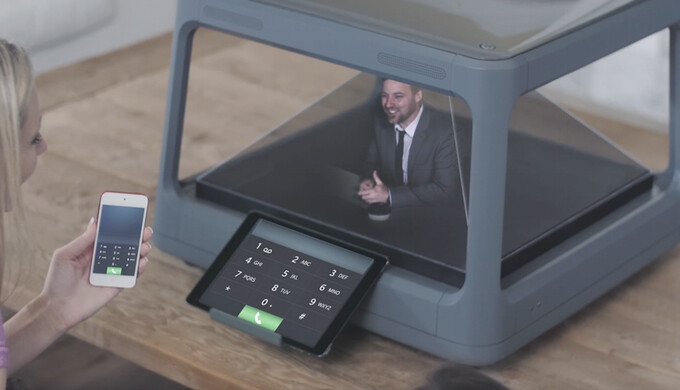 Vancouver’s H+ Technology held a launch party last week at the Imperial in Downtown Vancouver, and demoed Holus, its interactive tabletop holographic display, after launching the product on Kickstarter in the morning, and reaching its goal of $50,000 in 19 minutes before doubling that two hours later.

Holus enables a user to convert 2D digital content from a smartphone, computer, or tablet into a 3D hologram that can be viewed from 360 degrees and interacted with in a beautifully designed, minimalist coated-plexiglass prism.

There are two versions of Holus available:  a home edition with two smart phone charging docks and a Holus Pro, which includes an HDMI port and SDKs for Unity3D and Unreal game engines.  The intention is to make Holus an open platform for developers and artists.

Holus has a variety of practical applications.  The device is designed to enhance educational activities (imagine a lesson about the solar system or DNA with a moving, interactive 3D hologram), make games more immersive, and enable communication over voicechat with a holographic image of the person at the other end.

H+ has already partnered with Ronald McDonald House British Columbia to use Holus for healing purposes.  Together, they created the Magic Room, which has a large holographic device and interactive touch walls on which scanned objects become interactive images.  The technology allows the kids to have fun and take their minds off of their illnesses with a completely immersive and captivating interactive experience.