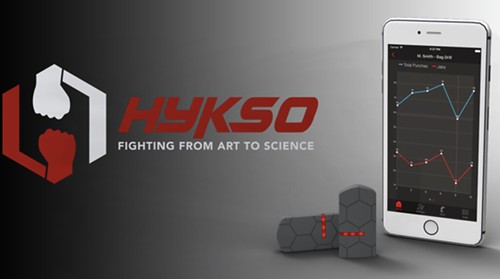 That’s the idea that led Khalil Zahar to launch Hykso, a Montreal startup that’s developed a wrist-worn sensor which he describes as a “Fitbit for boxing.”

The device calculates the number, speed and type of punches that are being thrown, that data is then available on a companion app.

Originally, the system was tagged at elite boxers. The Canadian National Boxing team is already using it and the United States Olympic team is planning to start.

Now, Zahar is launching a version aimed at people who box for fun or fitness. He says the app allows users to not only “know their fitness level, but also compare it to the pros and compete against each other without having to enter the ring.”

Zahar and eight other members of the Hykso team are currently in the midst of the Y Combinator startup incubator.

It’s one of two Montreal-based companies that have recently announced their ongoing participation in the prestigious Silicon Valley program.

“It’s definitely a hell of a ride, obviously we’re moving much faster than before,” Zahar says of the program. “They make you rethink your next move much more often.’

For Zahar, boxing is just the beginning.

The goal is to allow people to know just what separates them from the professional level.

Zahar says the next sport Hysko plans to focus on is track. Like boxing, it’s a sport where training is a generally solitary activity and where hard-to-measure metrics – like the timing and length of a runner’s stride – are important.

The Hykso punch tracking sensors, which come as a pair, currently sell for US$219.99, or just over CAD$300, and that price is scheduled go up to US$249.99. The amateur version of the app, though, is currently free, while the professional version, which includes more metrics, has a monthly fee.

Zahar also sees other uses for data that’s being gathered by his technology – he also sees an opportunity for it to be used by broadcasters to give viewers more insight into how a fight is going.

So far its been used once but with broadcasters looking into similar technologies, Zahar sees a lot of opportunity.