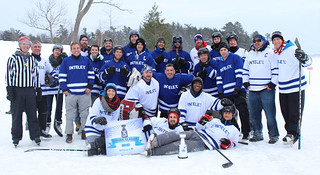 White boards everywhere. Constant stand-up meetings. Everything from a reading club to a Ping-Pong club.

It sounds like a university campus, but it’s actually office life at Intelex. It’s no wonder Intelex is a finalist for Employer of the Year at the 2015 Canadian Startup Awards.

Founded in 1992 by Dr. Andrew Jaine and Ted Grunau, Intelex is a company that provides management software designed to help businesses become sustainable and reduce their negative environmental and social impacts. Despite growing from six people to over 350 employees, Intelex has managed to keep intact that personal small business feel.

“I think that this organization, as opposed to other organizations that I work with or have worked for or know, is incredibly collaborative,” says Kristy Sadler, Marketing VP at Intelex. “Even just the design of the areas where people work facilitate really open communication,” says Sadler. “There are so few offices.”

Keeping a personal family-like feel to a big business is all in the small things.

“Every month, we have what we call cake time,” says Jon Hamovitch, VP of Human Resources at Intelex. Cake time is when the company celebrates major things like birthdays, weddings, new babies, and even introduces new employees. “We don’t forget those personal things,” says Hamovitch.

“We went from being business casual to don’t embarrass yourself,” says Sadler.

It’s the accumulation of these small initiatives that have resulted in Intelex’s nomination for Employer of the Year.

“The culture is very much lead by our CEO,” says Hamovitch. Intelex’s CEO is Mark Jaine. “We have a CEO who is committed to the culture, and understands that even as you grow and get larger, you need to pay attention.”

In 2015, Intelex earned accolades as an employer, including being named to Greater Toronto’s Top Employers and Canada’s Top Small and Medium Employers.