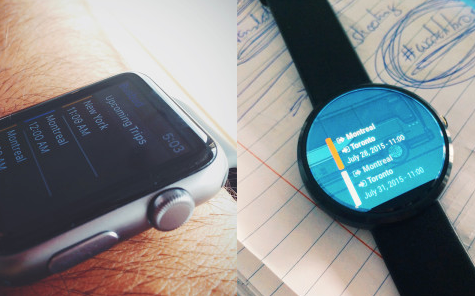 Montreal-based Busbud is moving into wearables.

On Wednesday, the startup, which allows customers to easily book bus tickets, launched new apps for the Apple watch and Android wear.

While Busbud’s standard mobile apps are focused on making it easier to find and buy bus tickets, the wearable apps are aimed at improving user experience during the trip, says LP Maurice, Busbud’s co-founder and CEO.

“With the wearable apps, [users] can check the information on their ticket, they can get information about the station,” he says. “You can also get notifications.”

As development continues, he says the app will give users more information, things like notifications if a bus is going to be late or information about passing cities are on the drawing board.

“You don’t necessarily expect this from a bus ride,” he says. “The bus is still a pretty basic form of travel but if you include better software, whether it’s search, booking or for the trip itself, you can make the bus experience much better.”

The apps were first developed as part of an internal hackathon at Busbud. Maurice says the idea, inspired by Google’s 20 per cent time, is to stimulate creativity within the team.

“We have this roadmap that we do every other day, we have these features that we know we have to build,” he says, it’s a chance to “take a pause for two days and try to build whatever we’re most excited about.”

Among the projects, was a leaderboard for the Busbud’s office ping pong table, that’s integrated with its internal chat program.

It’s pretty fitting. The hackathons, which happen every quarter, are a chance to build company culture, Maurice says, and pingpong is becoming part of Busbud’s company culture.

But it’s also a learning experience – a chance for software developers to learn about hardware or to play around with the API for the chat system. And those learnings could lead to other projects that have a much more direct impact on how people at Busbud work.

“Most of the projects are typically at the edge of our business,” he says. “This is one of the first times that we’ve actually shipped a new product to the user.”

While watch apps were something Busbud had been planning, Maurice says that without the hackathon they wouldn’t have got to them so soon.

“We definitely were excited about doing the watch apps but we might have done them a bit later,” he says.

“After we did the first beta during the hackathon, we were like ‘this is too cool, we need to push this out now,” he says. “We didn’t want to wait three months or six months to push this out because we thought this would be useful for travellers right away.”