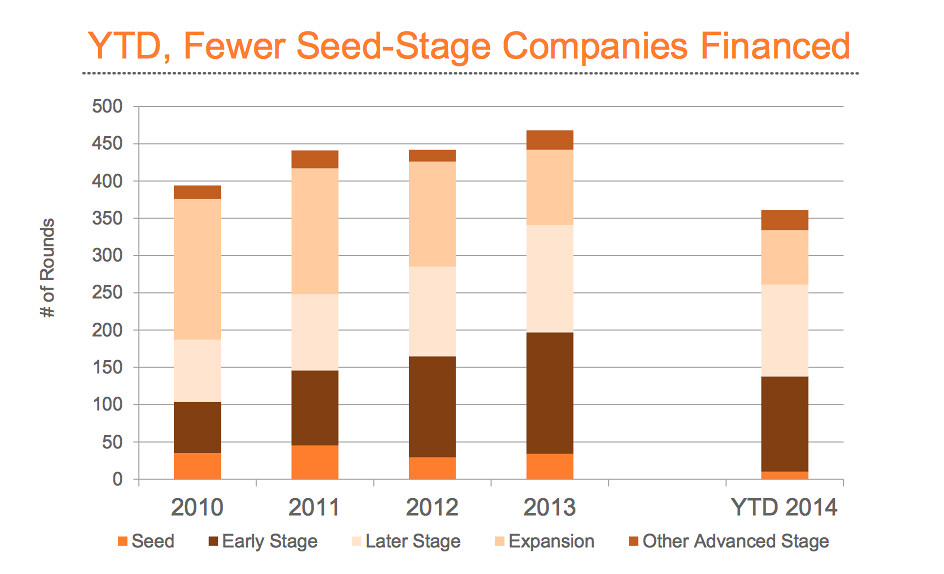 The beginning of the year is always a good time to take stock of what trends matured (or not) through the course of the previous year, and what might happen in the coming year.

As a venture capital investor with an interest in IT-oriented investments in Canada, here are a few thoughts on how I see our ecosystem building on events from 2014 and evolving over the next year or so.

1. Early-stage investment activity decreased in Canada in 2014. It will begin to increase again in 2015.

Canada has seen a general increase in early-stage technology investments (Angel, Series A) over the last 5 years, but data for the first 9 months of 2014 suggests that this trend has slowed. This should reverse in 2015, and the number and total dollars of early-stage investments should begin to increase again. This will be driven by:

2. The mid-stage capital crunch will remain the most difficult financing stage.

Canadian startups operate in competitive global markets, and this means a need for capital to grow beyond the start-up stage – depending on the business, $10m .. $20m for marketing, sales and continued R&D to break-out from the pack. This can be the most frustrating and difficult time for a tech company .. the technology works, and you have early customer traction as great proof-points of the value of the business, but:

We have a number of great companies in the country that have broken through this crunch over the last year, and I expect several others to continue this trend into 2015. But there also might be a few failures.

3. Later-stage companies and financings will continue to flourish.

There have been a number of tech IPOs and late-stage investment rounds in Canada in recent years. The CVCA / Thomson Reuters recently published its list of top 10 VC deals for 2014 showing 10 different companies each raising over $30m; this compares against 7 from 2013 and 6 in 2012. All numbers indicate a strong group of tech companies hitting their growth stride in their respective categories. The country has several more private companies building to this stage.

4. A bifurcation of exit valuations.

Large technology companies seeking to acquire break-out technology companies will find it difficult to compete against the robust later-stage private capital pools and valuations. This will mean that only the strongest of incumbents will be able to acquire well-heeled startups, and will do so only occasionally; but when they do the valuations will be “unicorn” in proportions.

Acquihires and other smaller exits will continue on pace as they have for the last several years.

5. SaaS companies will continue to grow.

Canadian entrepreneurs have built an enviable track record in building SaaS businesses targeting customers in Canada, the U.S. and beyond. Proximity, similarity and familiarity with U.S. customers have provided a strong ability for Canadian companies to succeed. The growth of companies following this business model will continue in 2015.

With CES just around the corner and the Apple Watch set for release sometime soon, wearable technologies will no doubt continue to grab industry attention in 2015. Starting with the Pebble Watch that famously turned to crowd-funding when venture capital did not come its way, a number of world-leading wearable technology companies have started with Canadian roots coming from Blackberry, University of Waterloo, University of Toronto and elsewhere.

Like all consumer-oriented electronics start-ups, challenges include creating a consumer brand, building a consumer-scale distribution channel and finding applications / markets that are large enough to build a platform business around yet not so large that huge conglomerates don’t enter and dominate. All are difficult and expensive. A select few of the Canadian wearables will definitely thread that needle, but 2015 could be difficult for others as the industry goes through the hype cycle.

The same technologies that make wearable devices possible – cheap and battery-efficient electronics, Kickstarter/Indiegogo to raise capital and build market interest, efficient low-scale manufacturing, cloud computing for data collection and analysis – will make their way into even more areas in the coming year.

8. Canadian startups will play a role in BitCoin and BitCoin-related technologies.

Bitcoin has passed through the hype cycle to enter the quiet period of development behind the scenes and will emerge in a few years as an “overnight success.”

But beyond that, attention in 2014 moved toward bitcoin’s blockchain as being an enabler for other applications beyond commerce. Watch for a few mid-stage financings of Canadian start-ups in 2015 seeking to play a breakout role in these areas.

9. Use of analytics from the app-install universe will will expand into adjacent markets.

The science of cost-effective app installation is one of the most advanced applications of data analytics around. This expertise is particularly strong in the competitive game developer world, and the Canadian game dev community is rich with large and small players who are experts in this area.

I expect to see many of these technologies expand beyond game dev circles – to the small-business SaaS market as an obvious next step, but also into enterprise marketing / sales, retail and even real-time broadcast video and television advertising.

Canada has numerous pockets of hardware infrastructure expertise – companies that design and build “behind the scenes” technologies such as semiconductors, optical technologies, datacenter hardware, wireless technologies, etc. A few of these companies announced funding during 2014 including BLiNQ Networks, D-Wave Systems, Peraso Technologies and RANOVUS.

With continued usage of mobile devices, network virtualization and data processing in the cloud, 2015 should see further interest in this sector on both sides of the border – and Canada should see more than an occasional funding round in these types of companies.