District M was founded by a group of advertising veterans who saw a rapidly changing industry that needed programmatic solutions.

Based in Montreal, District M (or ‘district m’) delivers more than 1,200 digital ad campaigns a year—a number that’s rising as the company keeps up with ever-increasing demand. The company has two specialties: developing proprietary products to increasing digital ad revenue and managing unique advertising campaigns to reach both diverse and specific audiences.

District M’s somewhat dual approach has caught the attention of both local and national advertisers. Their Canadian clients include Corus Entertainment, Quebecor, the Weather Network, and Yellow Pages, as well as Meredith, Atlantic Media and Purch in the United States. 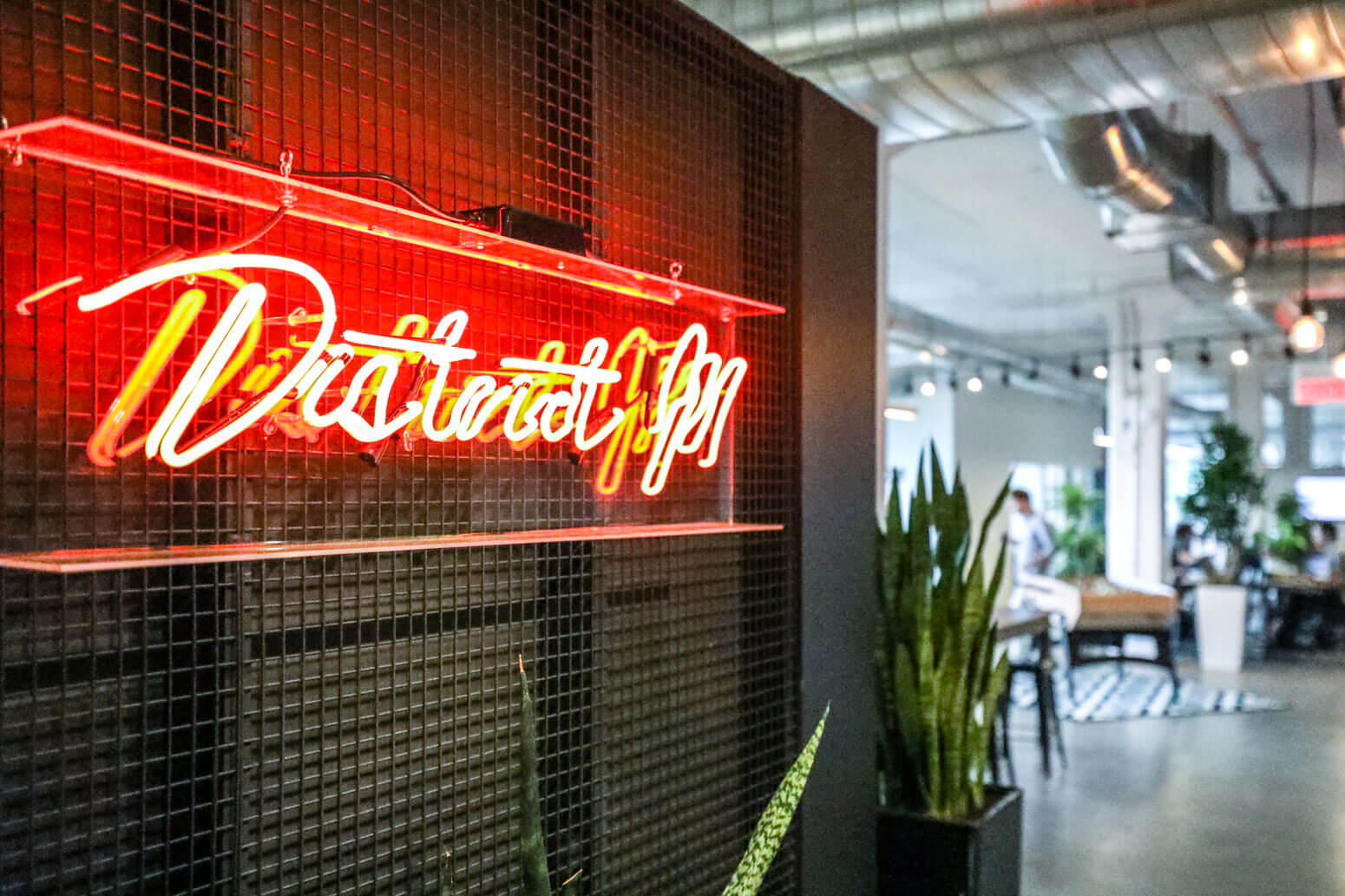 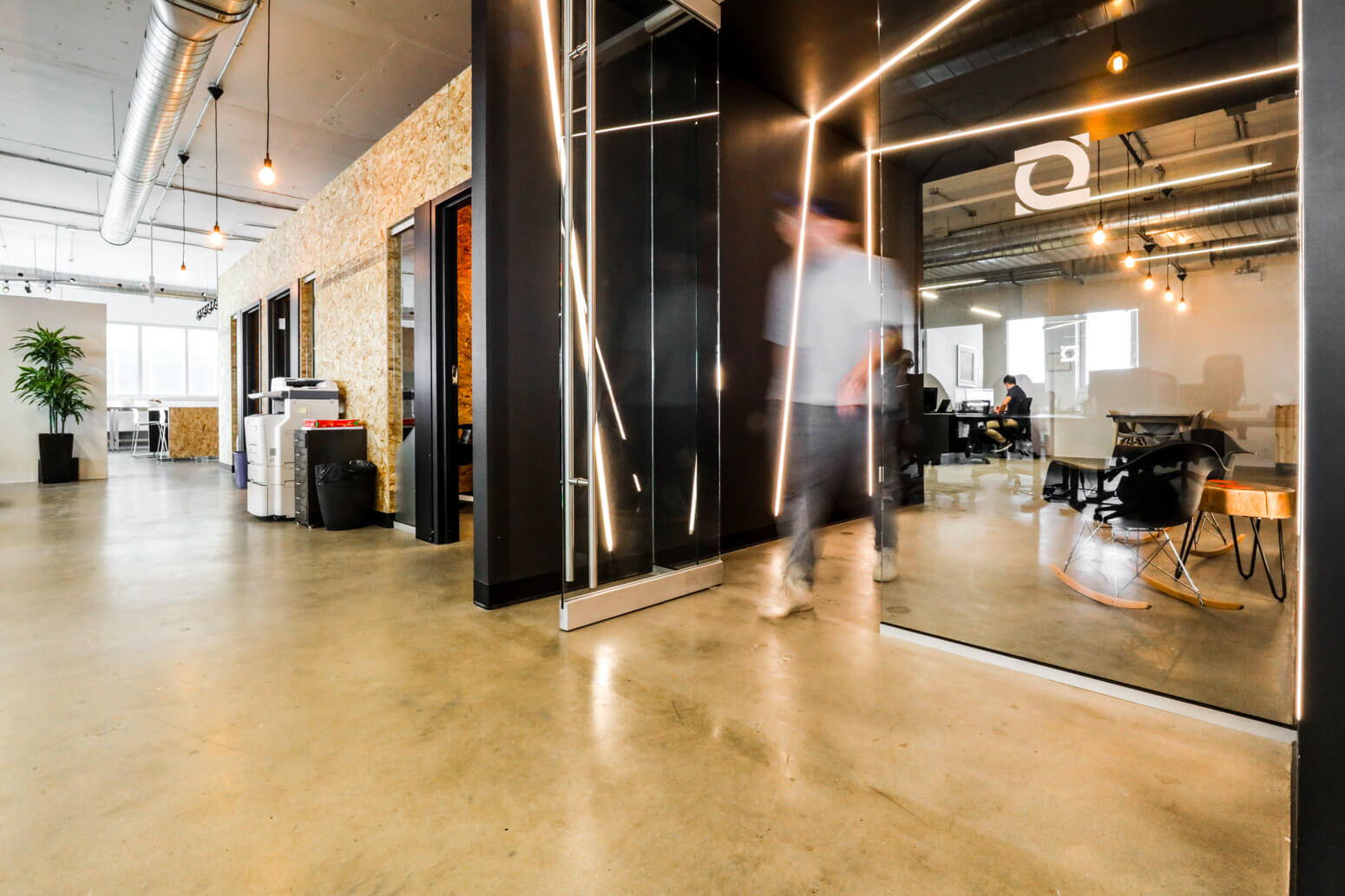 The company offers ad-tech tools including boost, which maximizes online advertising revenues by monetizing site impressions; header bidding, a feature that allocates impressions to advertisers with the highest CPM; and they recently launched ‘touch‘, a new mobile and interactive ad format.

The company moved to Montreal’s trendy Mile End in 2015, taking up shop in the industrial neighbourhood that’s been dubbed the Startup Quarters with neighbours like Breather and Ubisoft. Their office on the 7th floor of a brick-and-beam building came stocked with old charm of concrete floors and wall-to-wall windows 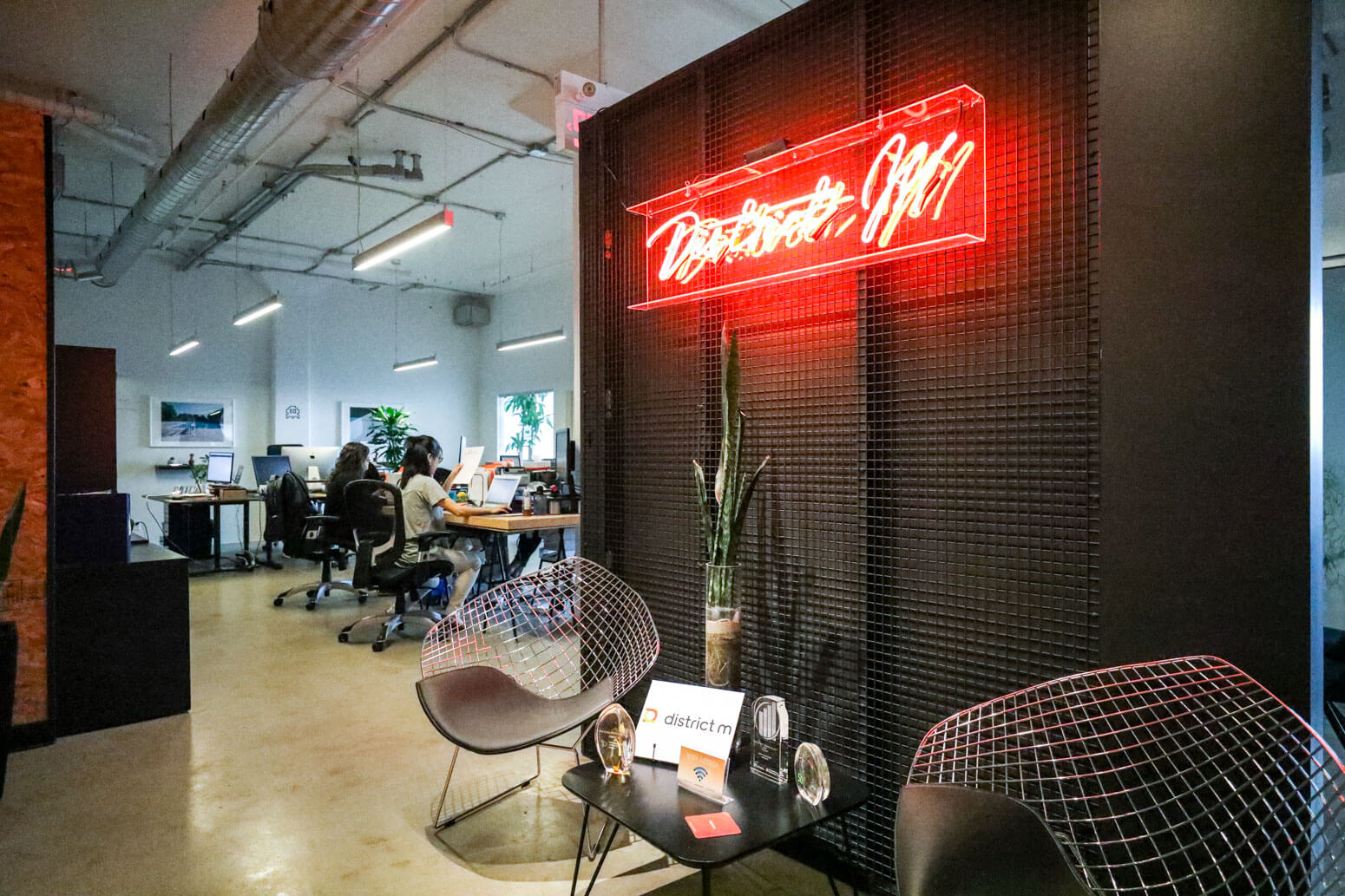 Stepping into the airy office, a moss logo at the entrance and the company’s name emblazoned in pink neon are the epitome of District M’s office: hip with vintage undertones and lush with greenery.

Simon Regniault, District M’s marketing director, worked with Studio Folio Design to respect the building’s original cachet while bringing the office firmly into the 21st century. The design team used textured raw materials like engineered wood and cork in the office, softened by the dozens of plants around the space.

“We thought of creating a beautifully designed and useful design space that employees can use. We wanted to create an environment conducive to imagination, innovation, and teamwork.” – Jean-François Côté, CEO

Synergy was top of mind during the design phase, resulting in an open floor plan with plenty of break out spaces and alternative seating. And although the management team has separate offices, the glass walls ensure natural sunlight can still fill the space. No matter where you stand in the office, the panoramic windows offer an unobstructed view of Montreal’s skyline including Olympic Stadium. 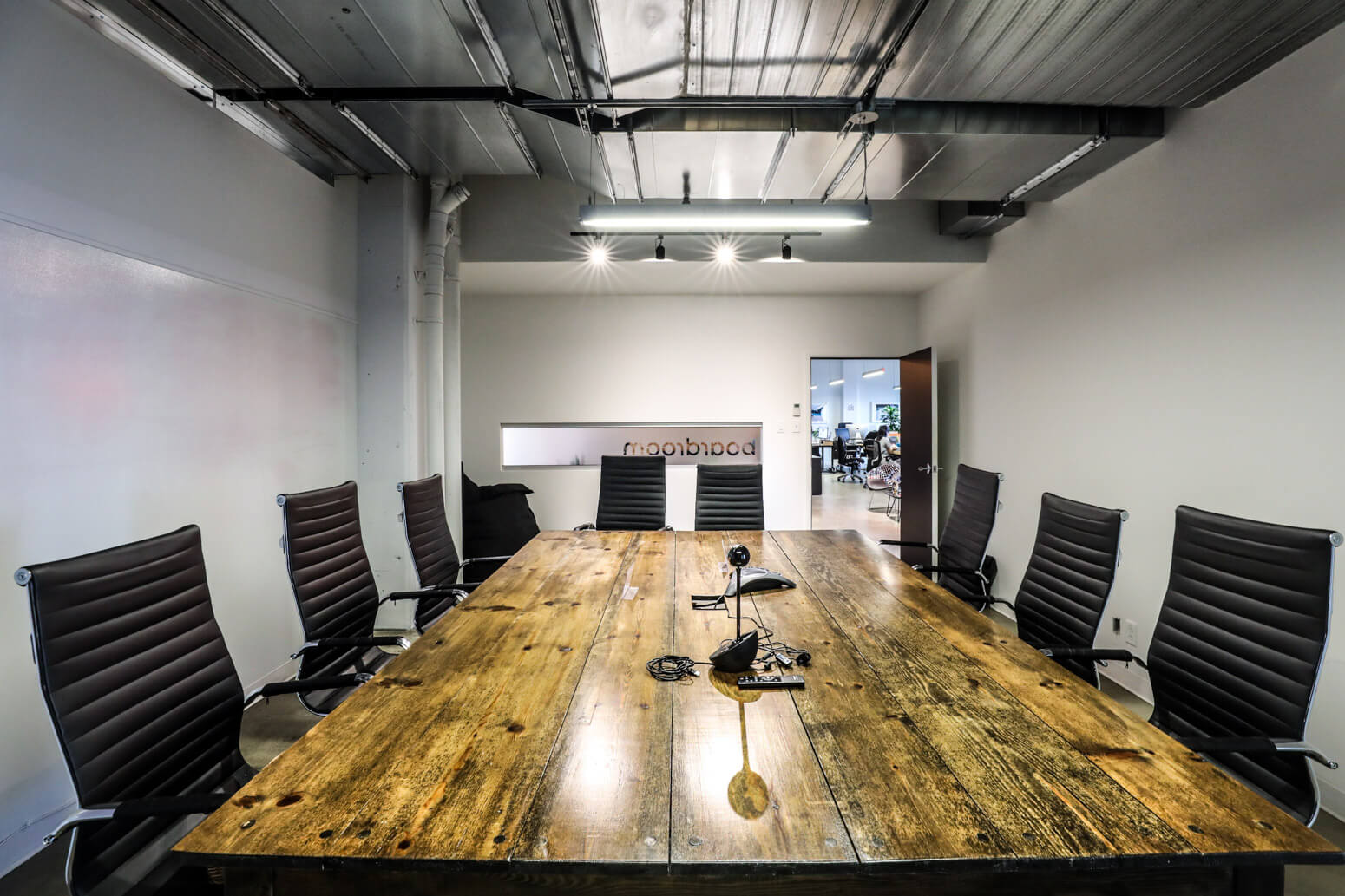 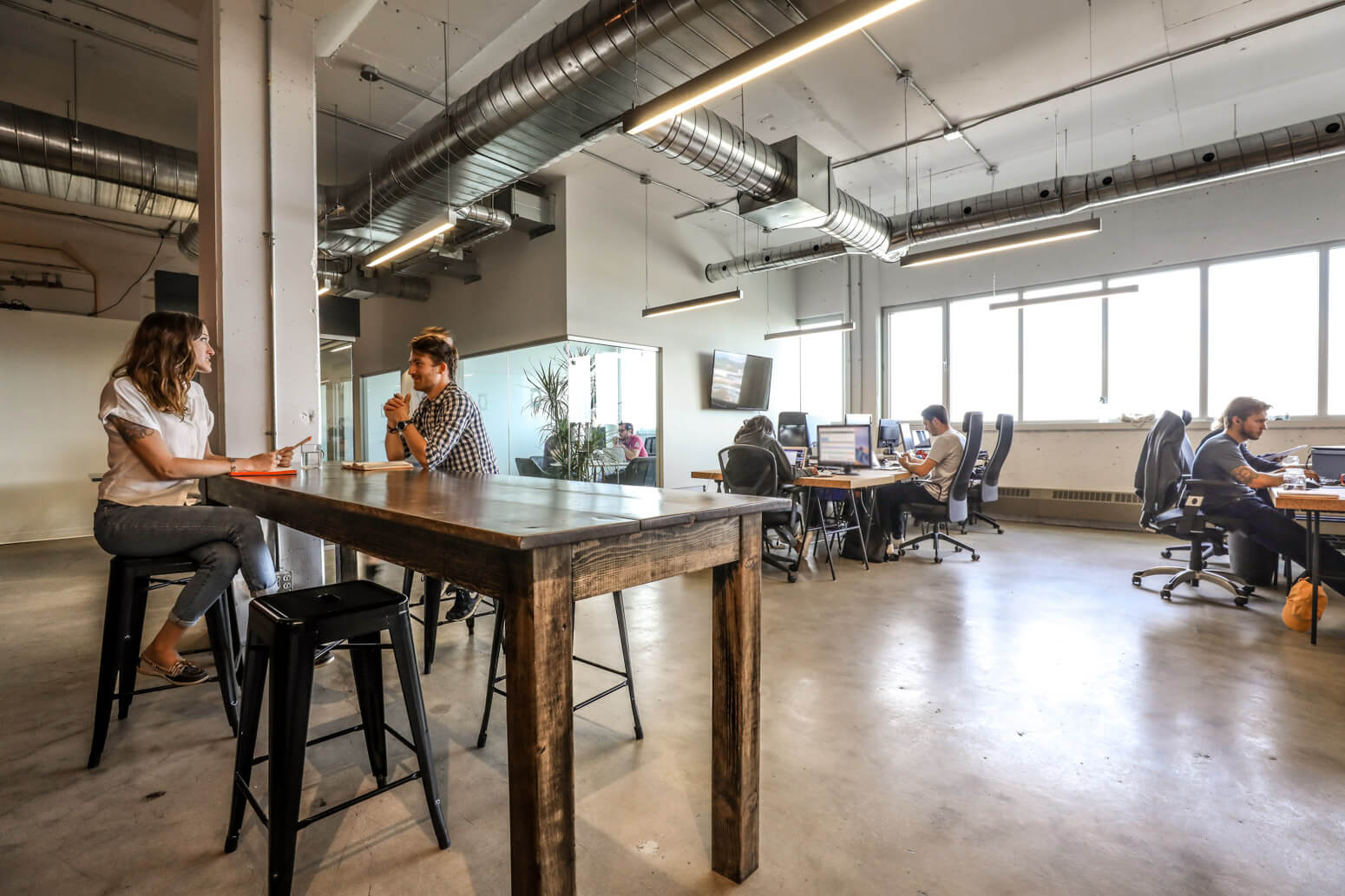 Employees are free to work where they want, whether it be a desk or in a pod. The small wooden meeting rooms were created to evoke a cozy cabin and designed to fit up to three people. Each room features a specially painted wall that employees can use to jot down their ideas—or maybe a quick doodle to get those creative juices flowing. 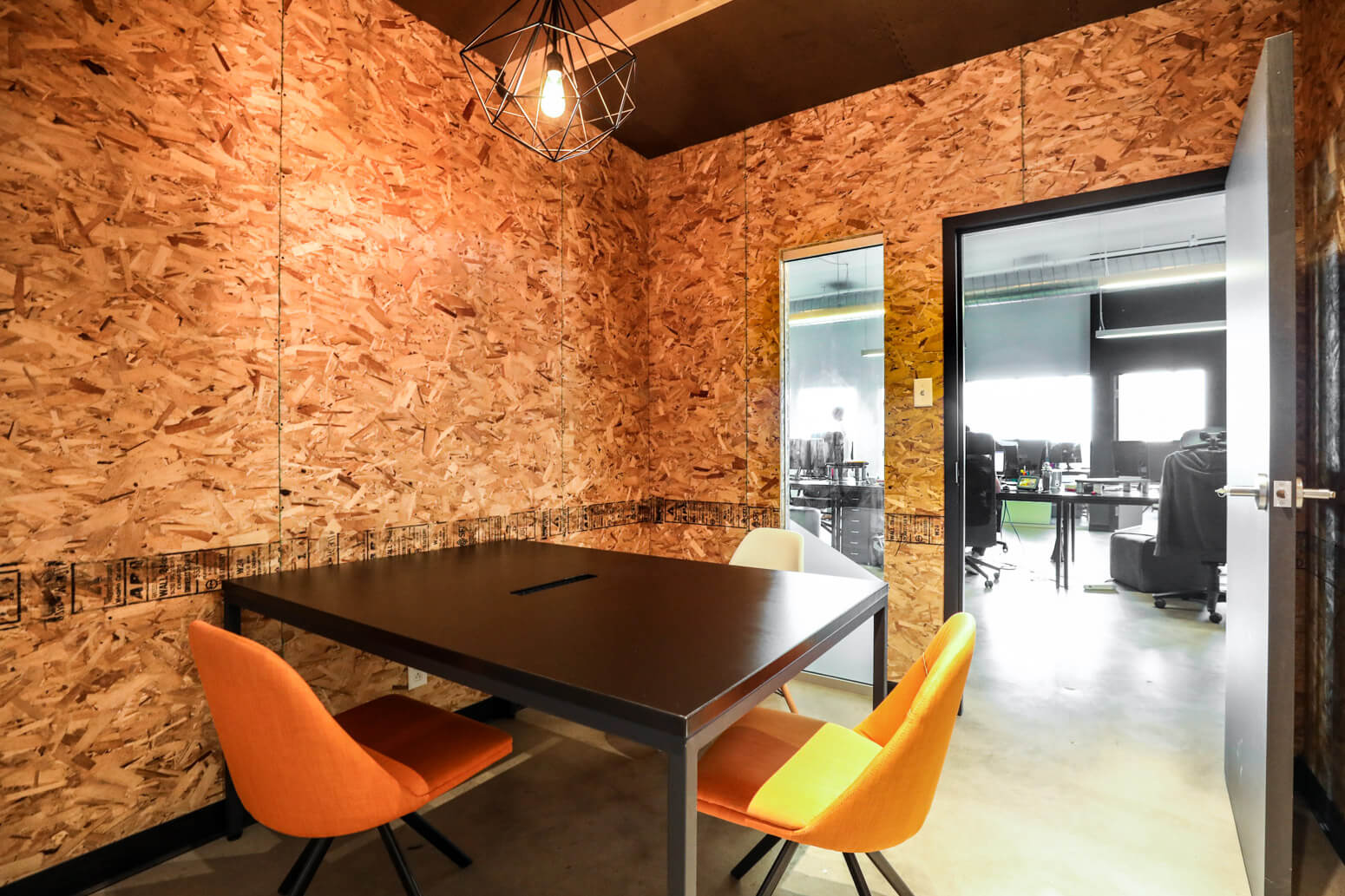 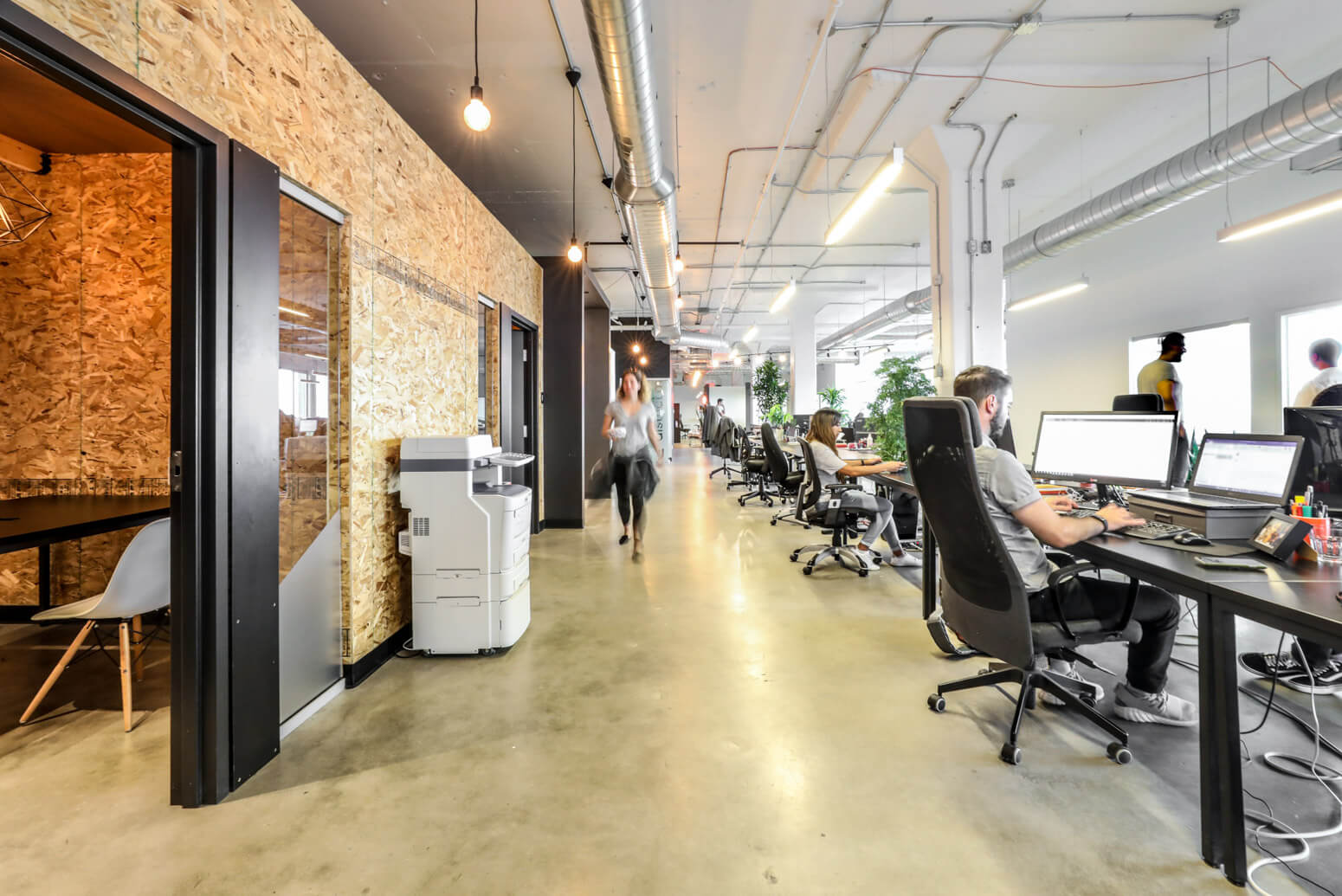 The technical team works from a dedicated serene-but-futuristic zone, complete with a Star Wars-esque entryway. 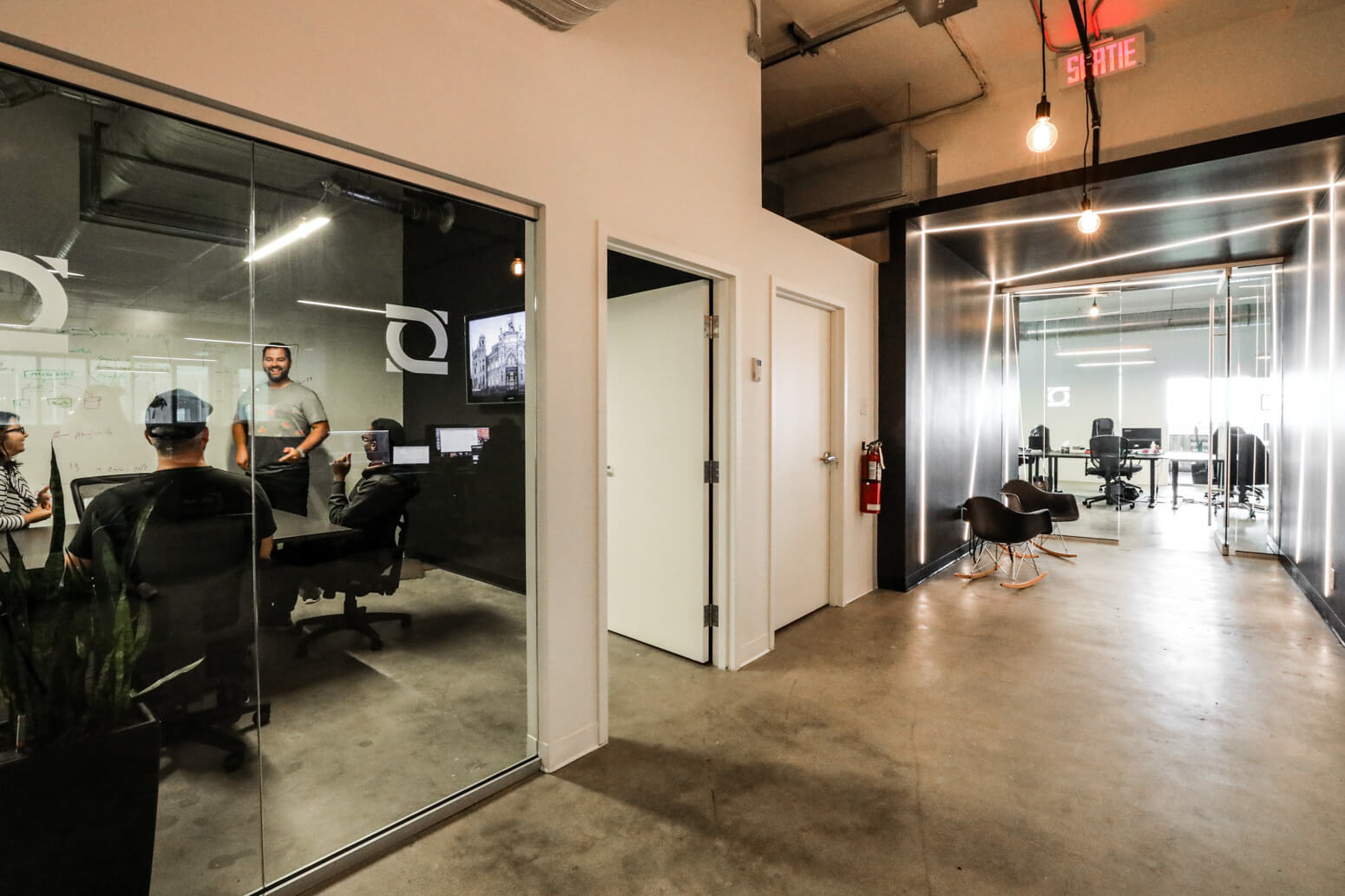 District M fills their pantry with healthy and fresh fare, including fruits, granola bars and nuts. On Thursdays, they’ll host the occasional ‘cinq à sept’ (happy hour) where the office comes together for end-of-day drinks. Every month, they’ll bring in the ever-so-famous Montreal bagels from Fairmount—the first bagel bakery in Montreal—for a team breakfast. 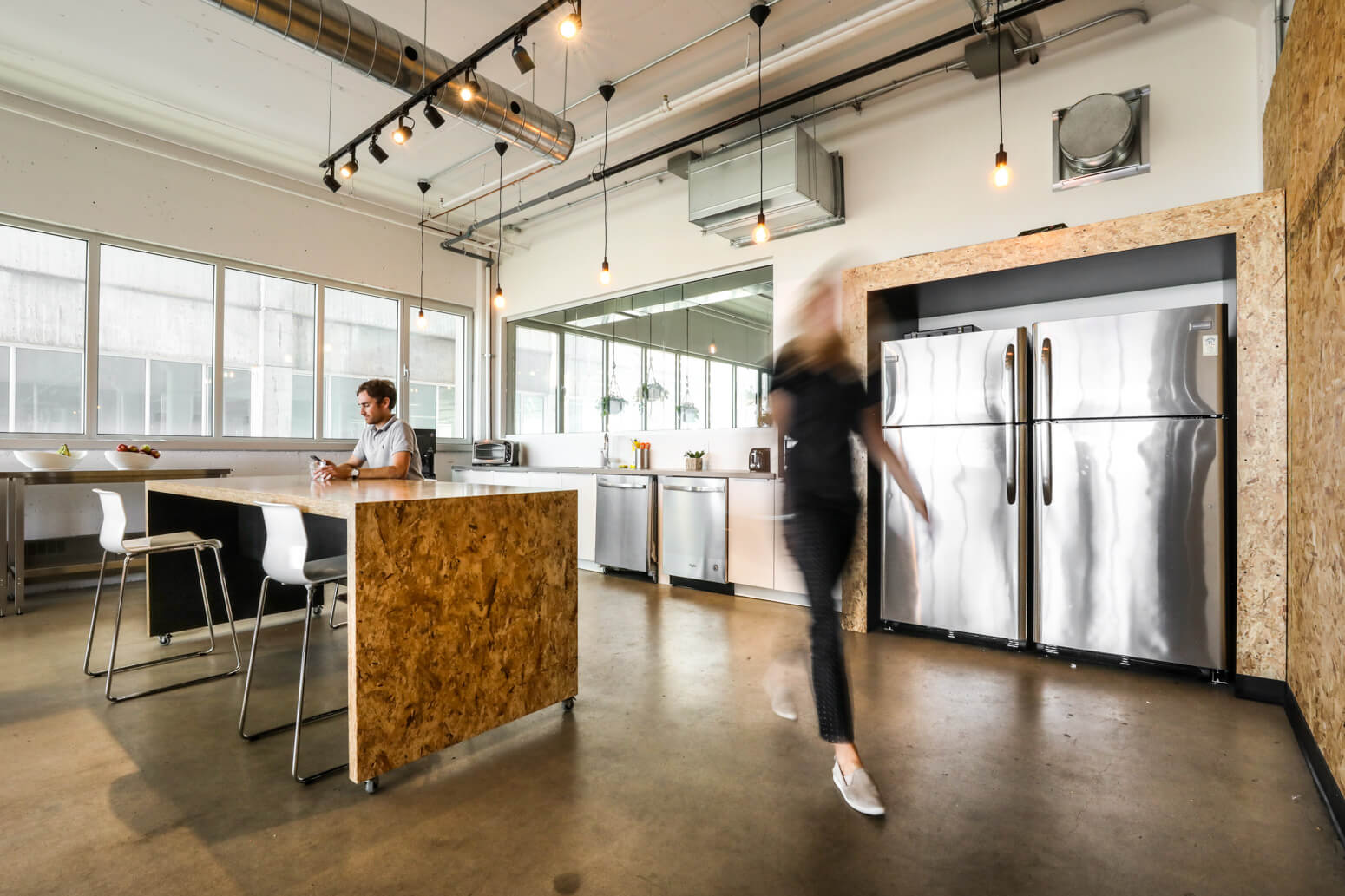 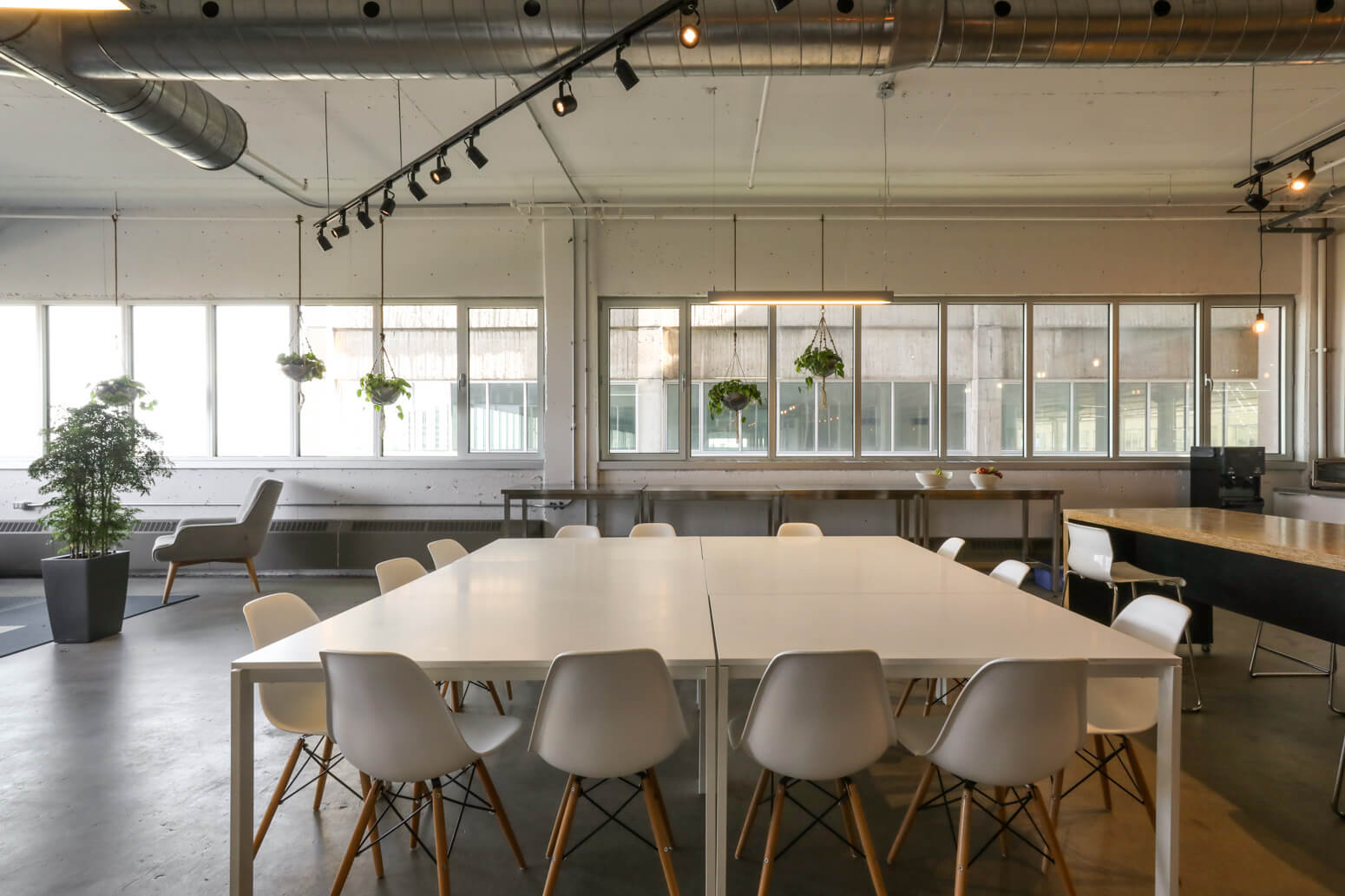 In the summer, District M employees enjoy the open outdoor co-working space by WeWork, SunLife and Ubisoft. It is complete with hammocks, leafy plants, a Névé coffee joint and a cocktail bar (for after work, of course). 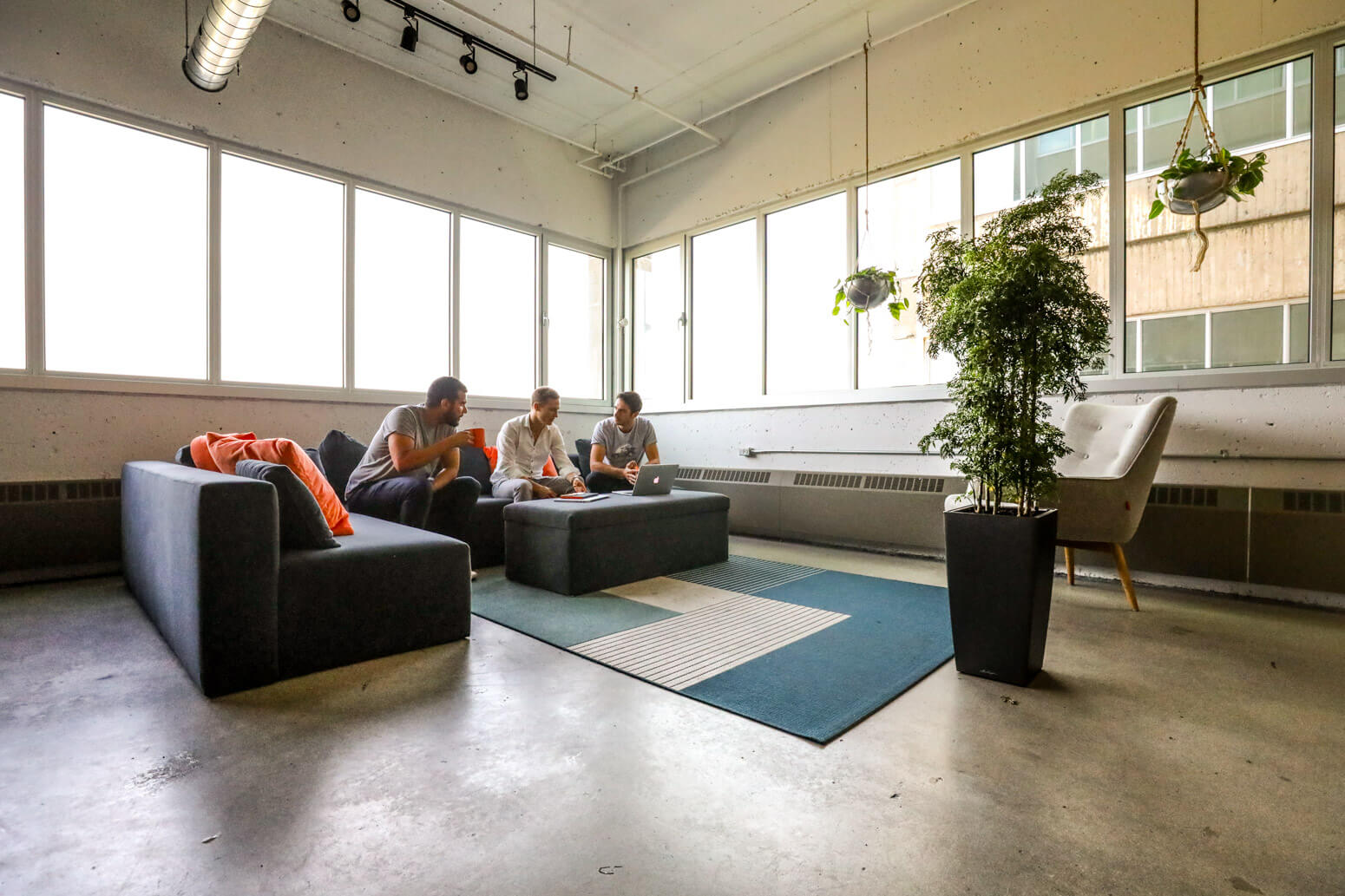 The company has seven key values they promote around the office—and directly on the walls. These mantras include be your best self, never give up, create like an innovator and think like an entrepreneur.

Employees can achieve that optimal work-life balance with an (almost open) fitness facility. The building also comes with indoor bike storage and showers for those hot Montreal summer days.

Courtside and tabletop athletes alike can show off their skills at a company volleyball tournament or at the foosball table at lunch. District M has a selection of sofas and bean bags primed for chilling out, whether that’s playing guitar or playing their Nintendo Switch. 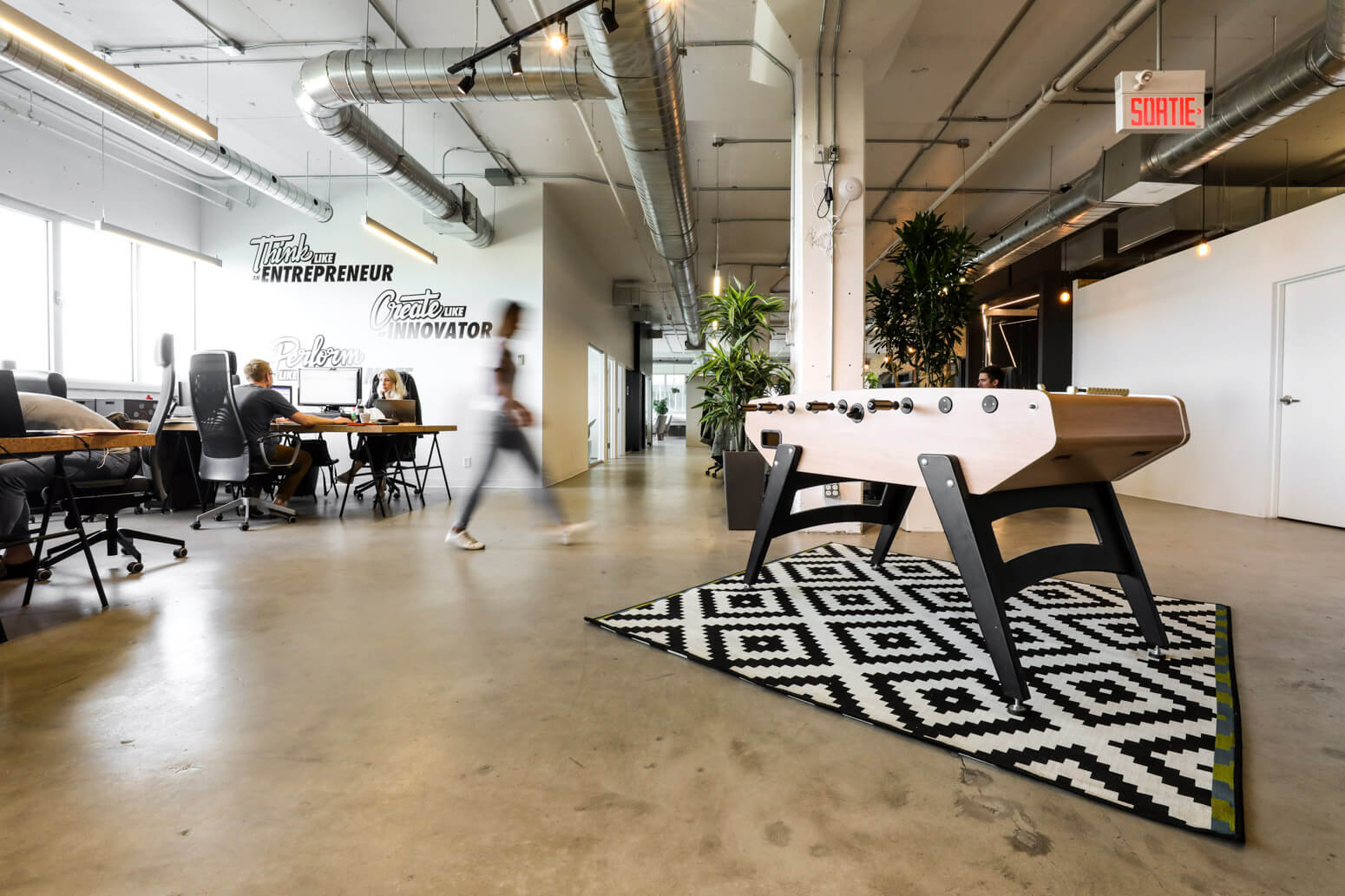 Every year, District M’s hosts a company-wide surprise offsite retreat, equal parts future-looking and team building. This year, the team event was held at Quebec’s Esterel Resort and rolled out a Back to the Future theme—complete with a DeLorean. Where District M is going, they won’t need roads.