During the spring of 1898, the Canadian Pacific Railway company opened Place Viger in the economic centre of Montreal. Named after the city’s first mayor, the combined train station and luxury hotel accommodated up to 350 guests for around $4 per night.

Burdened by the economic recession of the 1930s, CP Rail closed the hotel doors and sold off the stone masterpiece. The building saw little glory in the decades that followed: A military warehouse during WWII; undefined municipal offices for 30 years; and then an extended vacancy all left the building in less than ideal condition—until now.

Lightspeed was founded in Montreal in 2005 by CEO Dax Dasilva. The company offers a point-of-sale and ecommerce platform for small- and medium-sized businesses.

In just over a decade the company has grown from four to 560 global staffers providing omni-channel solutions to 40,000 retailers, restaurants and point-of-sale businesses. Their core business is in the US, although they are truly global with customers in more than 100 countries worldwide.

Despite offices in Ottawa, Ghent, Amsterdam, London, Olympia and New York, Dax kept his global headquarters in Montreal, moving into the historic Viger Hotel in 2015. 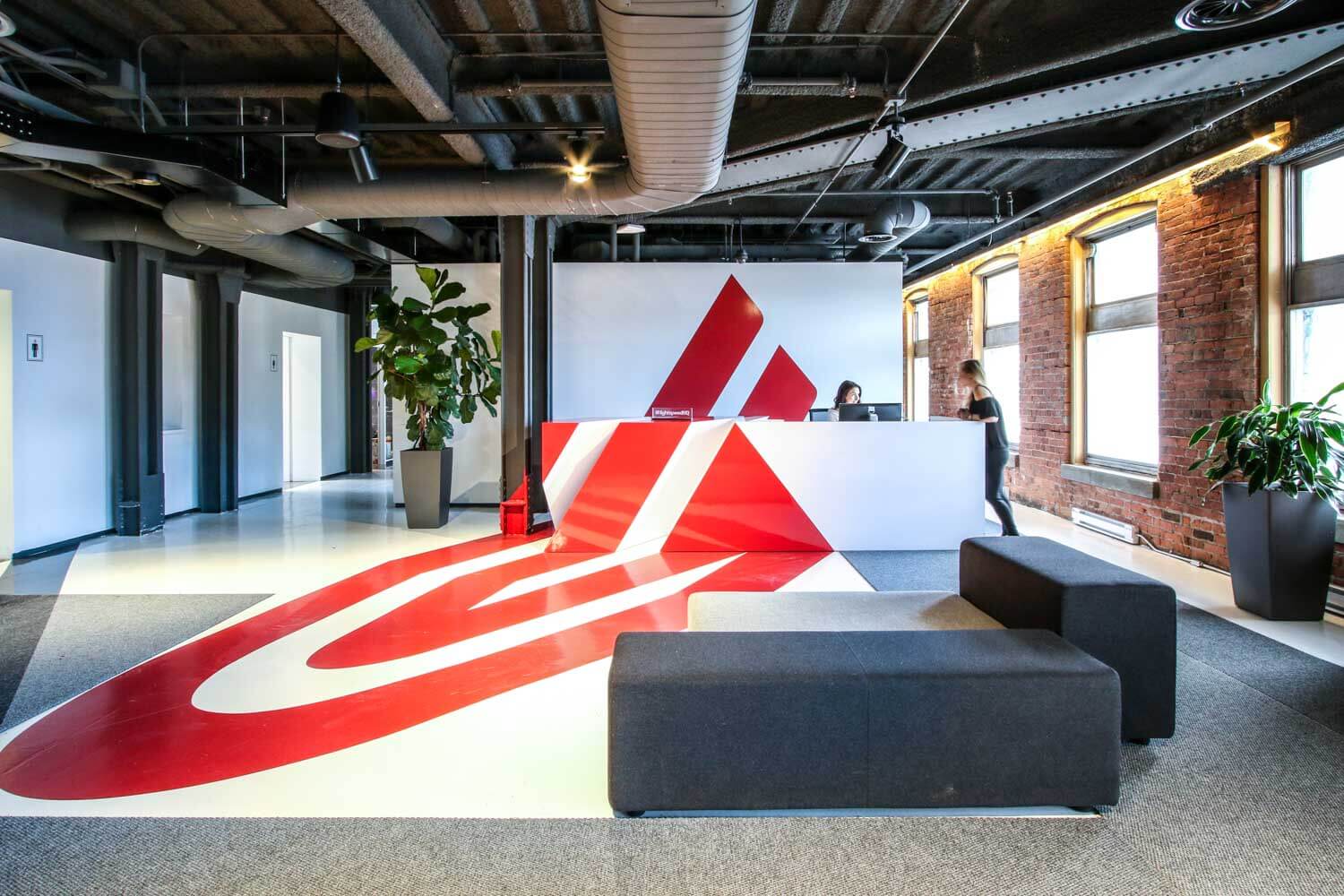 A growing team of 300 staff work from the Montreal headquarters. Teams of developers, creatives, customer support and operations work from the castle-like building, overlooking Square Viger at the north end of Old Montreal. The space, designed by ACDF, is currently 30,000 square feet with another 11,000 currently under renovation. 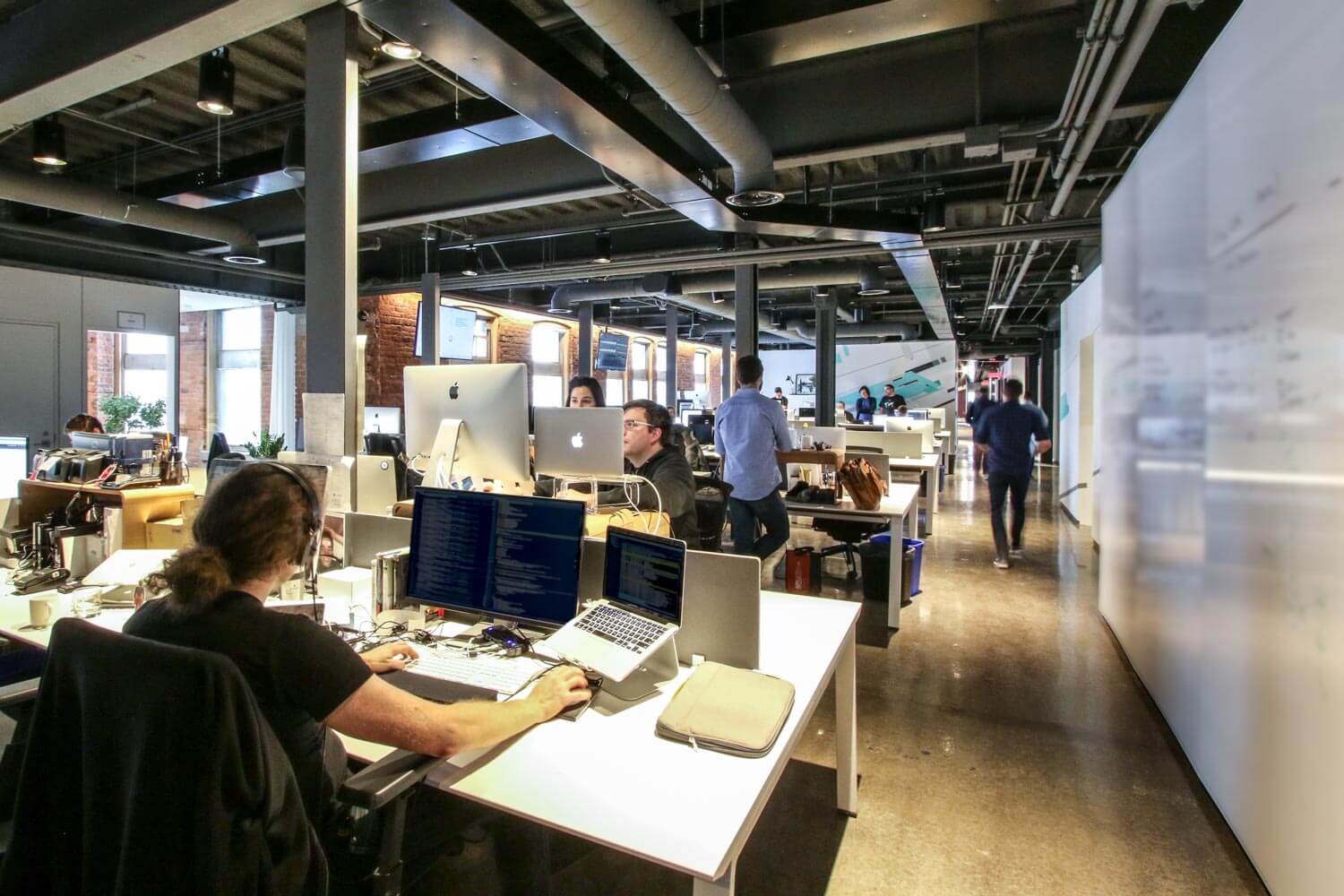 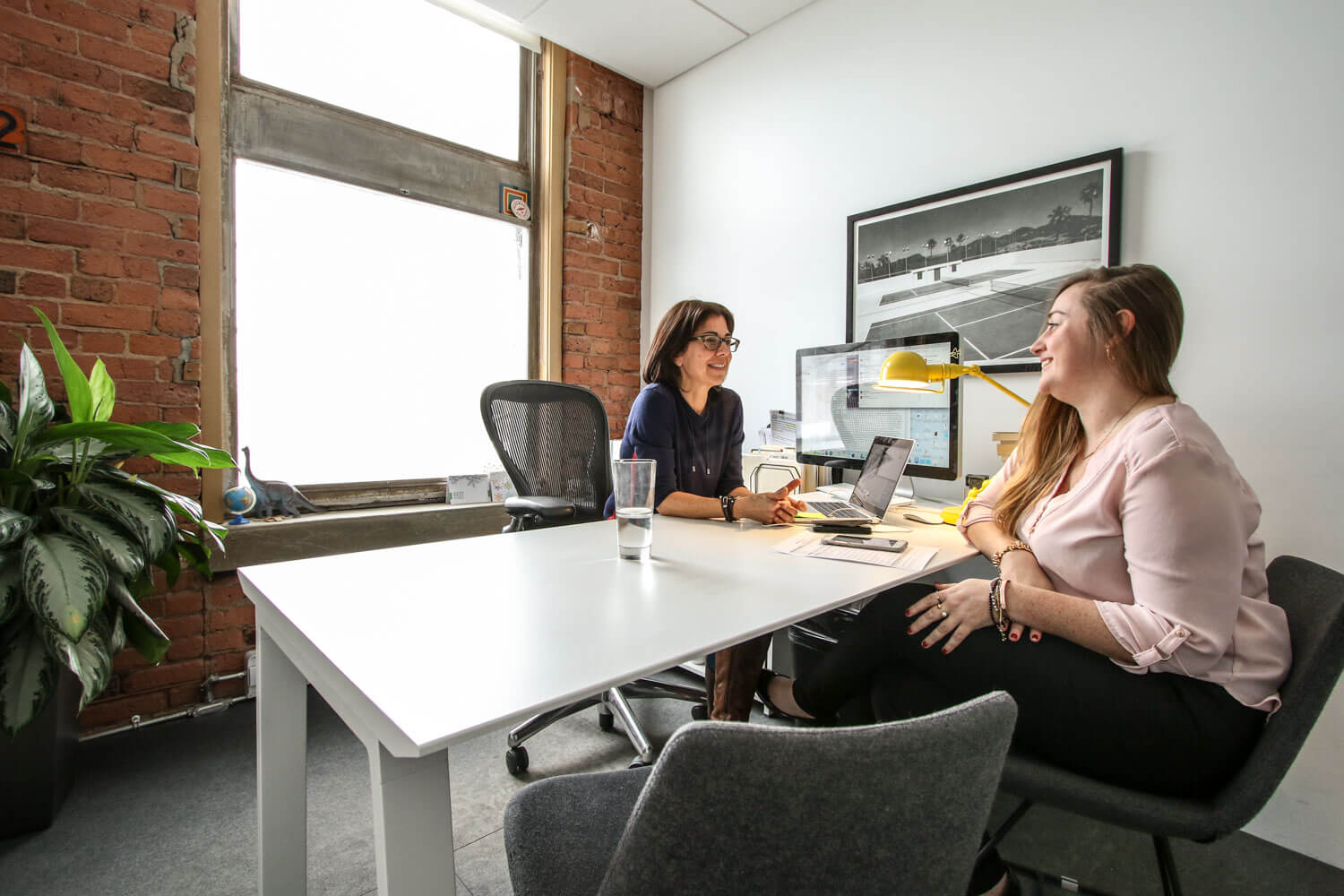 The building is a mix of modern design and century-old materials. Office spaces have been integrated into the building’s unique architecture. Giant vaulted ceilings, pitched roofs, wood fireplaces, and original stone are the backdrop for reinforced steal beams, polished floors and ultra-clean furniture. 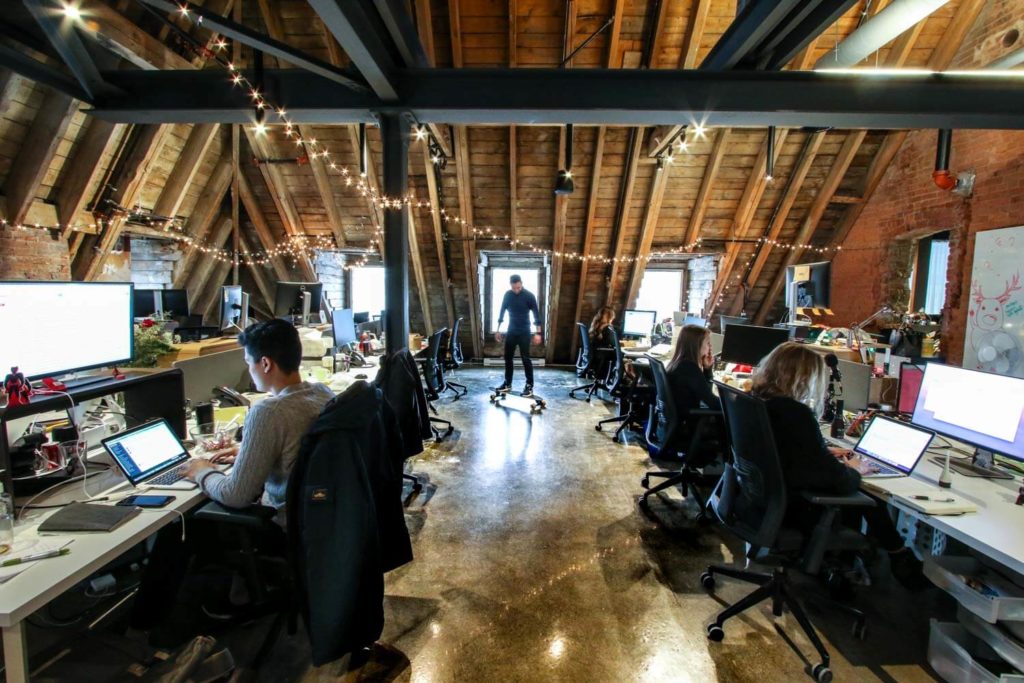 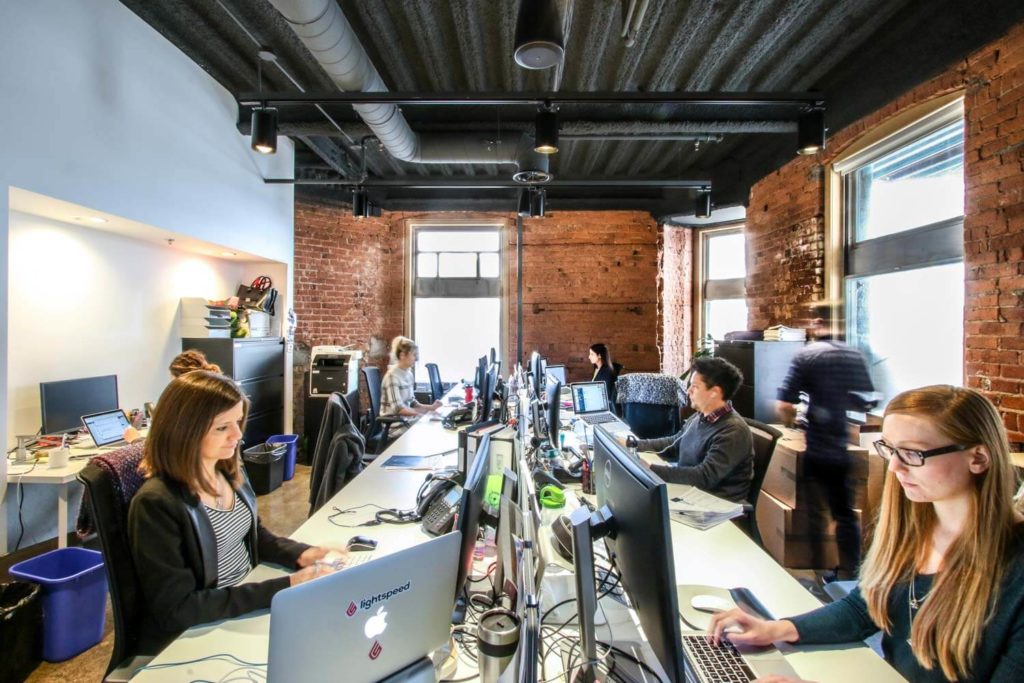 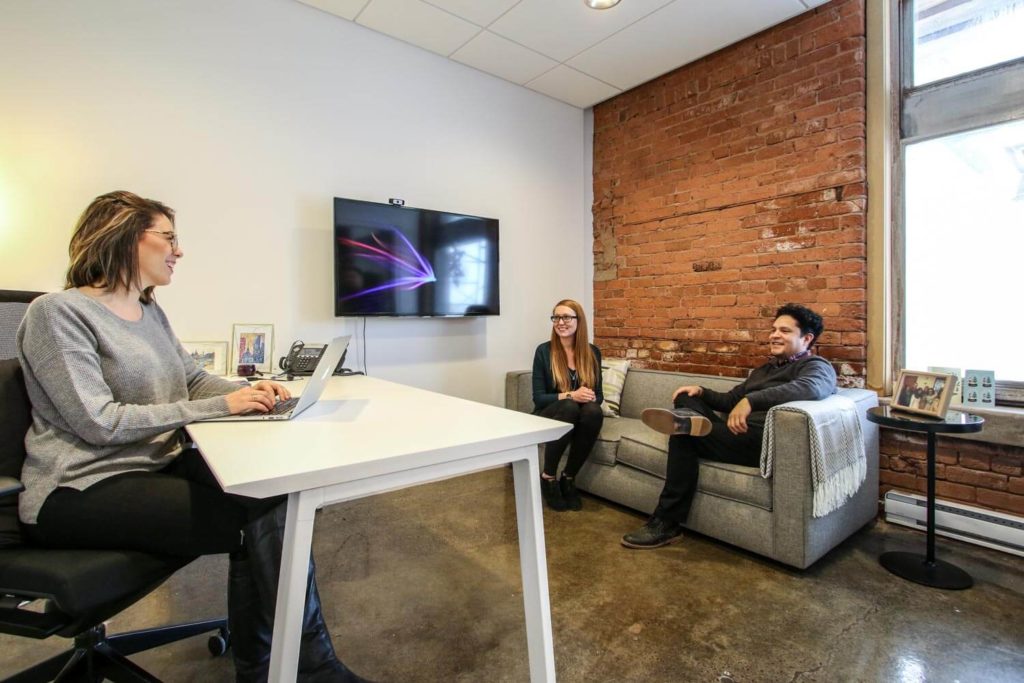 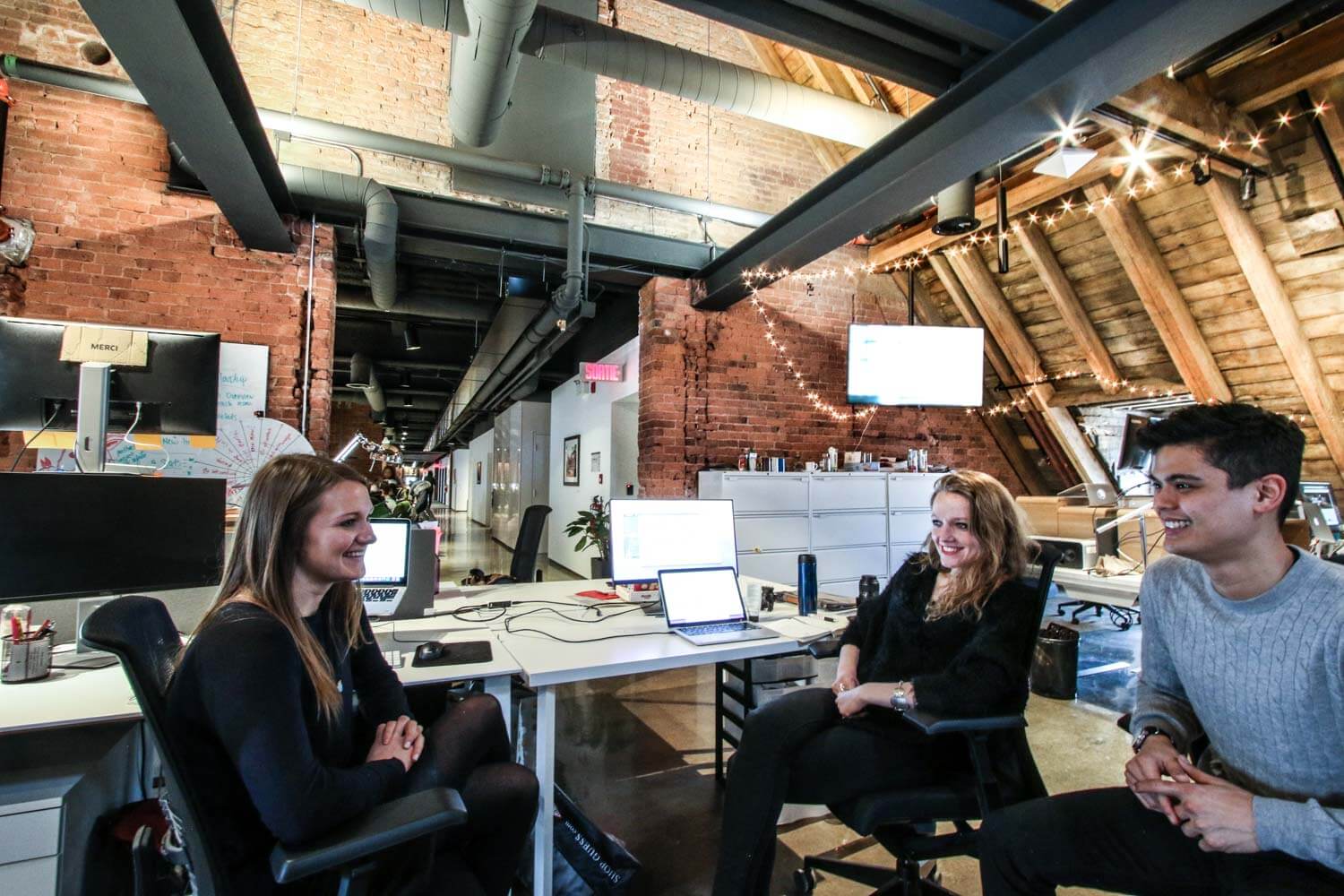 The kitchen is a central meeting place for the entire office. The main elevator opens to a common space where the kitchen is bustling with activity. 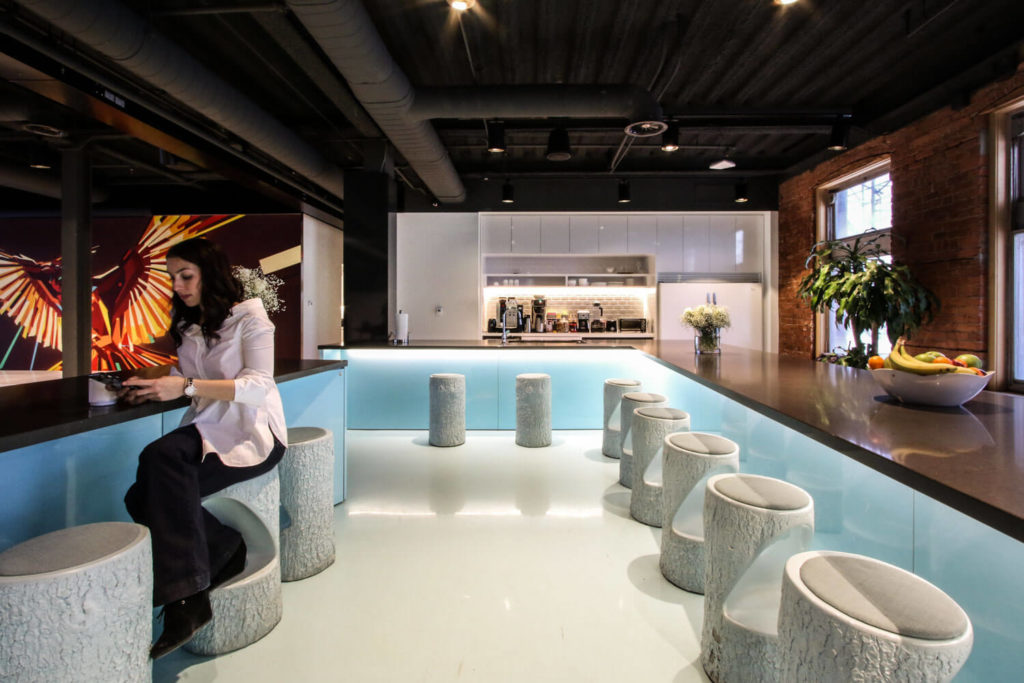 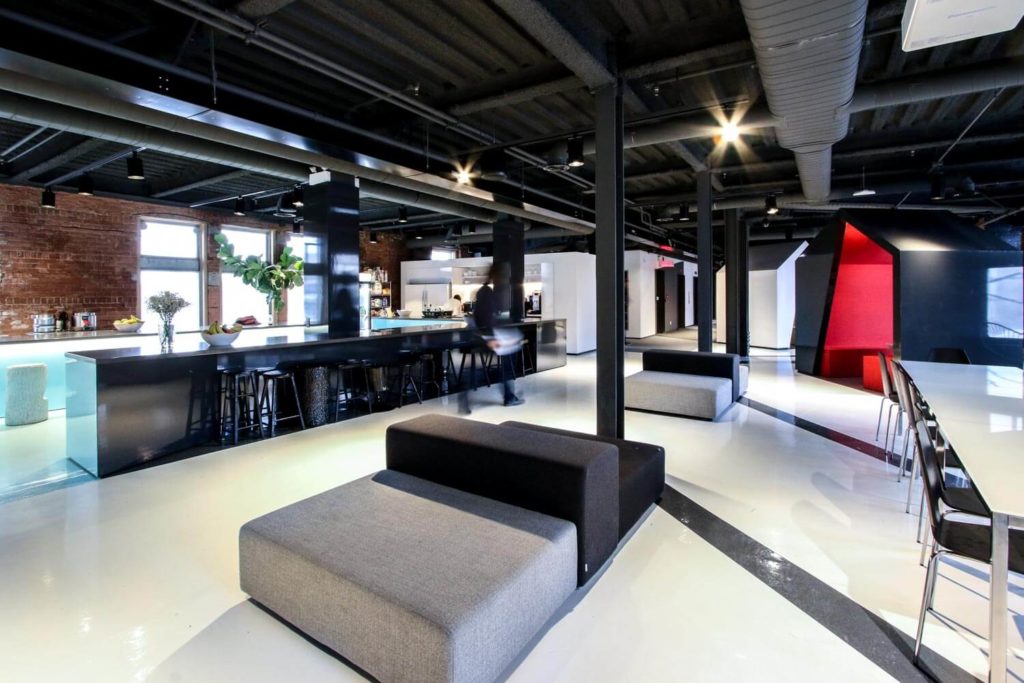 A striking mural by Brazilian-American graffiti artist Arlin Graff dominates the common space. The piece is not just about aesthetics; it speaks to the common mission of the company.

Lightspeed is the backbone of tens of thousands of independent businesses around the world who trust the platform to operate ever day. That trust is not lost here; this team deeply respects the integral role they play in empowering their customers to succeed. 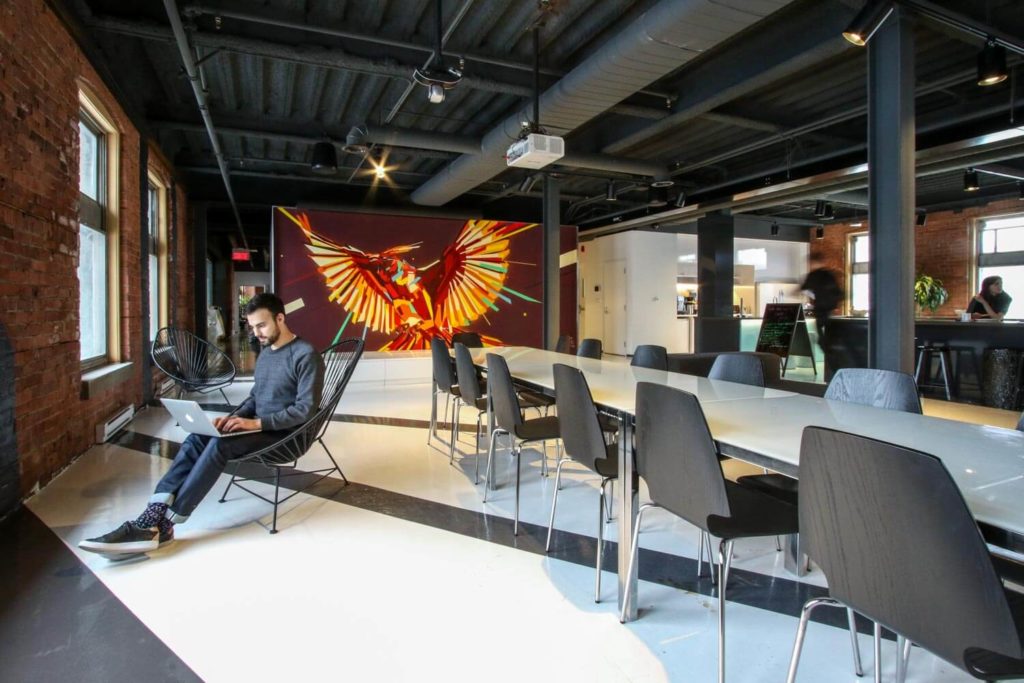 This light-filled common space includes smaller booths and window seats for work or play. The space doubles for town hall meetings and community events, but also serves as a hang out for cross-team camaraderie and after-work clubs. Game nights, knitting, volleyball, hockey, soccer and running are all on deck for Lightspeed staffers after hours. 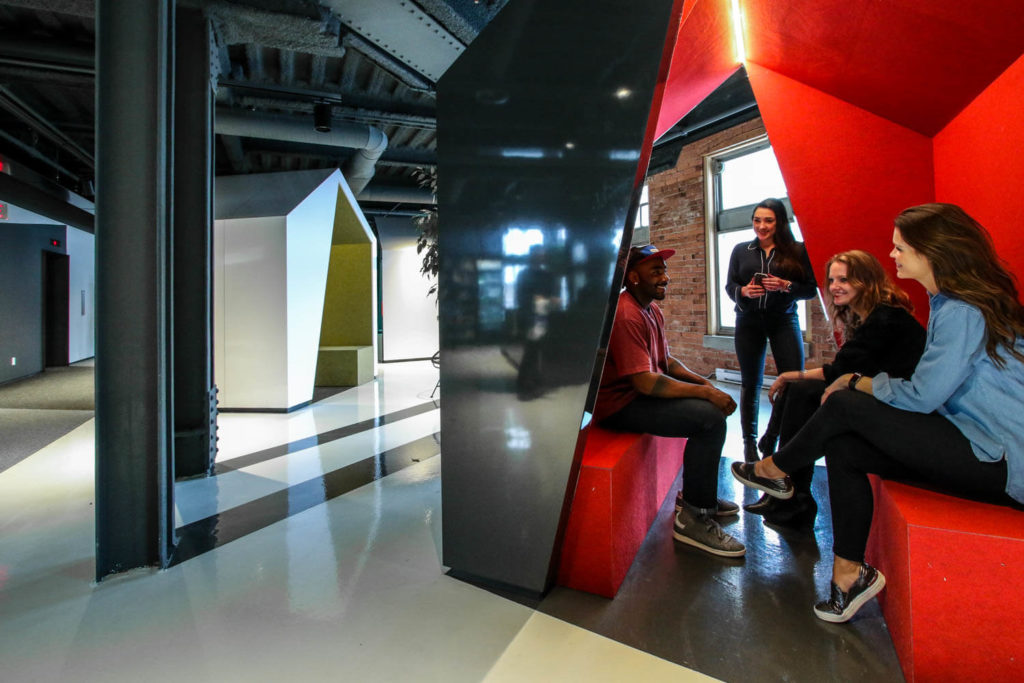 Getting around in a winter city like Montreal can be difficult, which is why the company offers transit incentives, fitness benefits, onsite showers, and ample storage for all the winter gear. 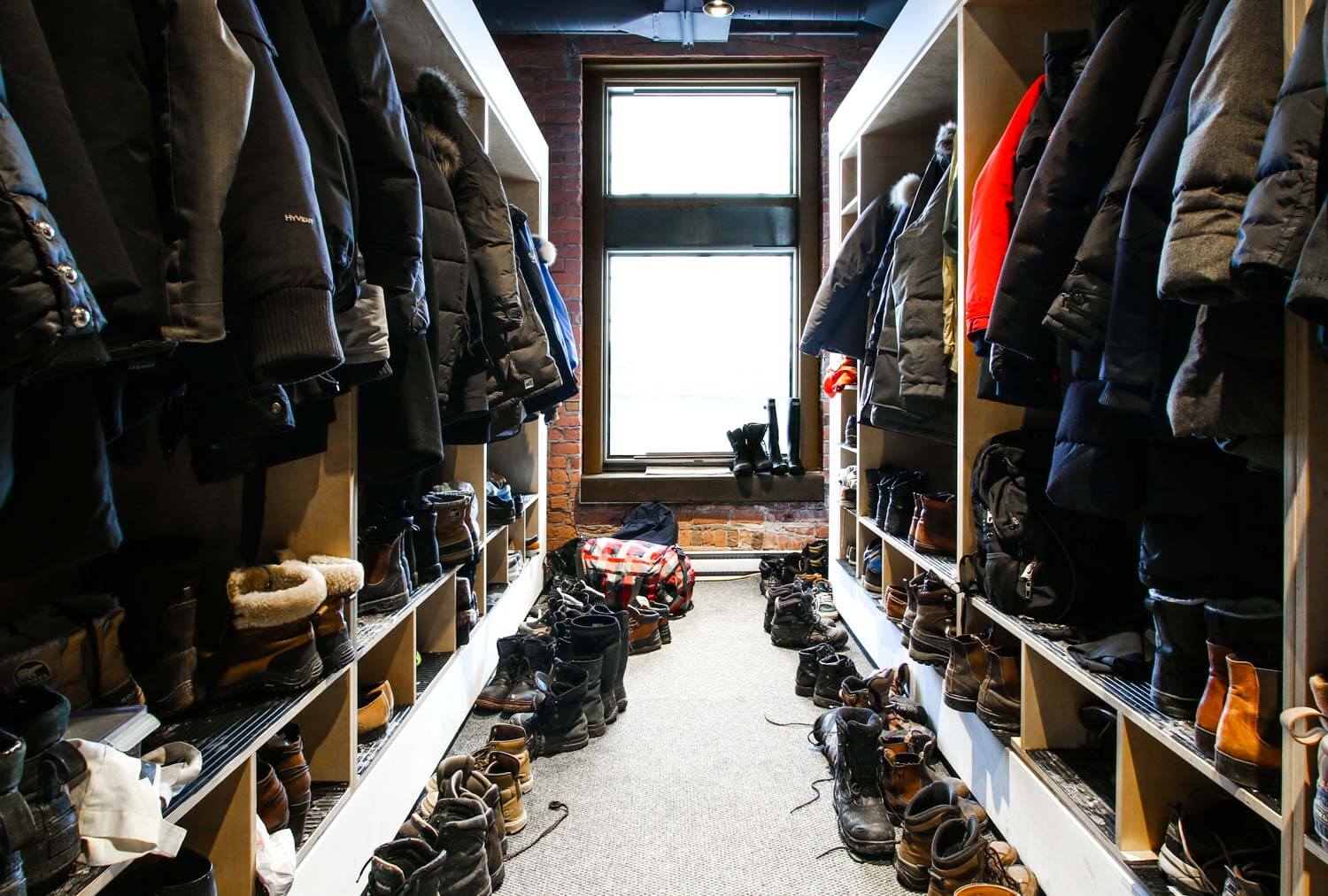 And finally, at end of the week, teams kick back to celebrate the wins in the leather-clad cigar lounge and bar. 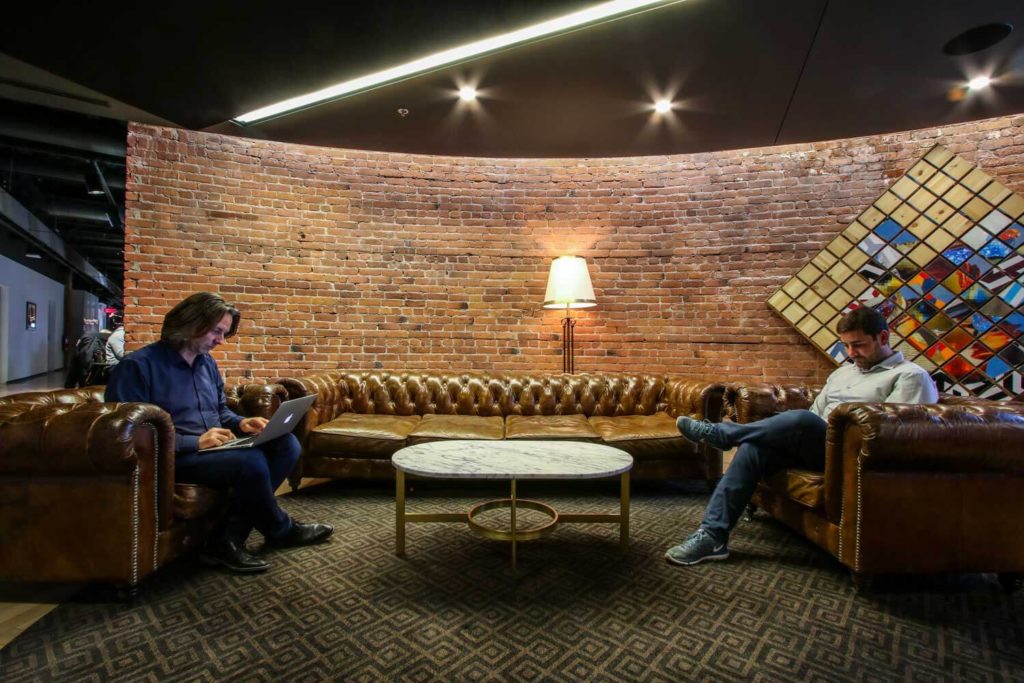 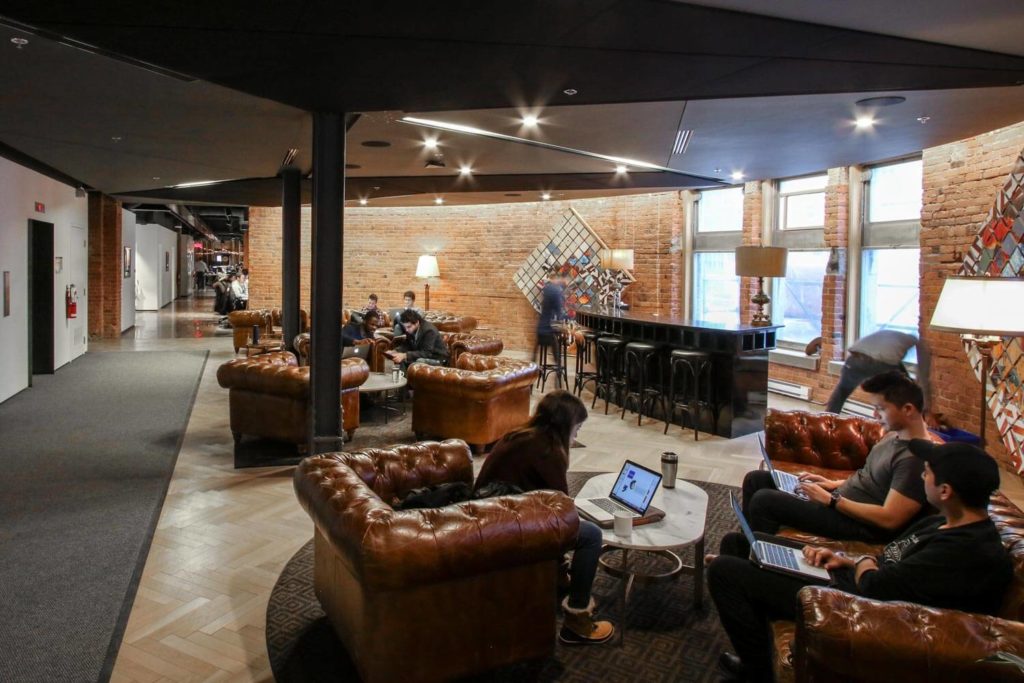