A shopping mall isn’t where you would expect to find one of the world’s most influential companies building the best tools in the business. But that is exactly where Microsoft has built their stunning new Global Development Centre.

This is Microsoft’s sixth Global Innovation Centre, which opened in June 2016. The 143,000-square-foot office accommodates over 700 people, who make up several flagship teams including OneNote, Skype for Business, MSN, and BigPark—which is responsible for HoloLens and NFL for Xbox and Windows 10. 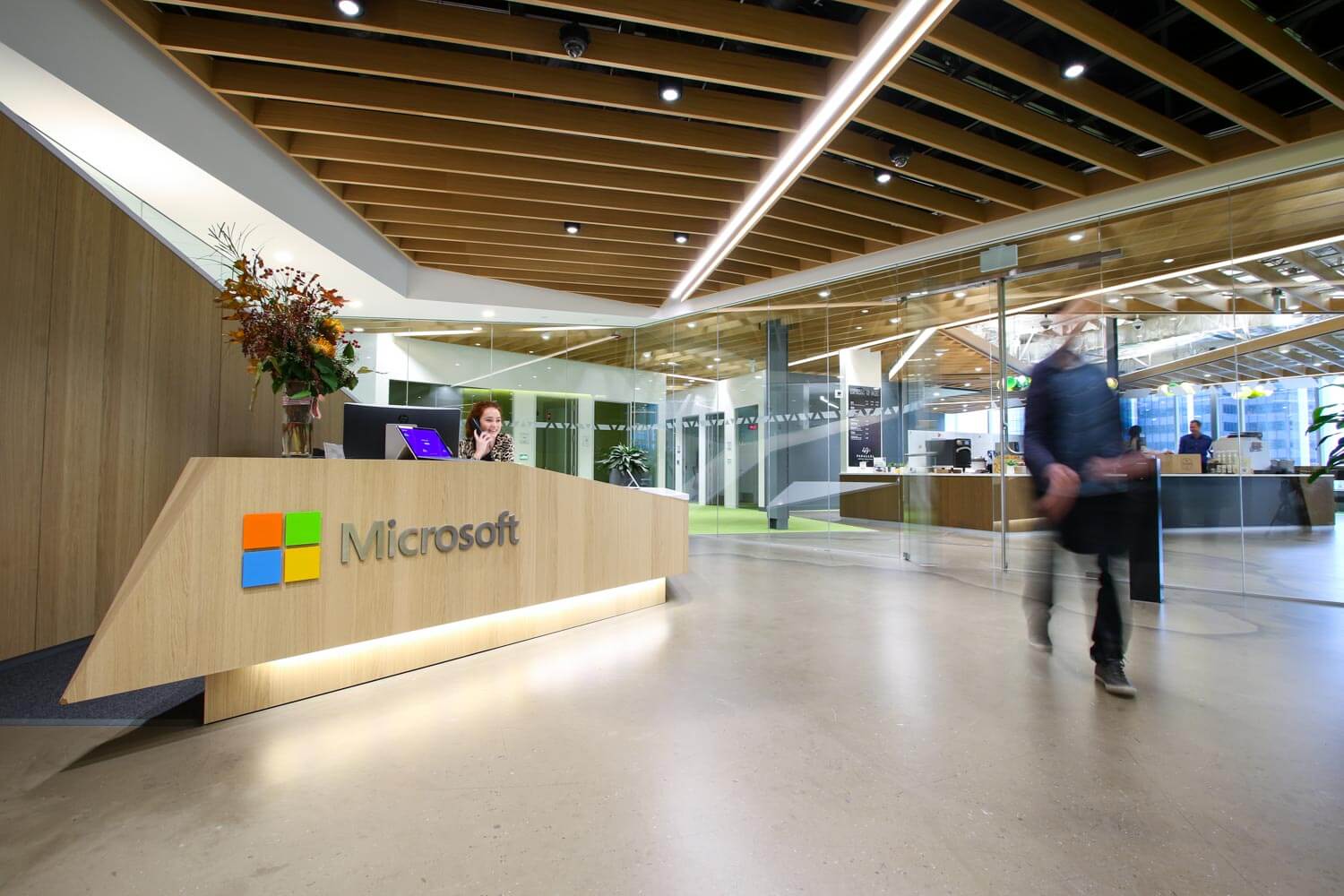 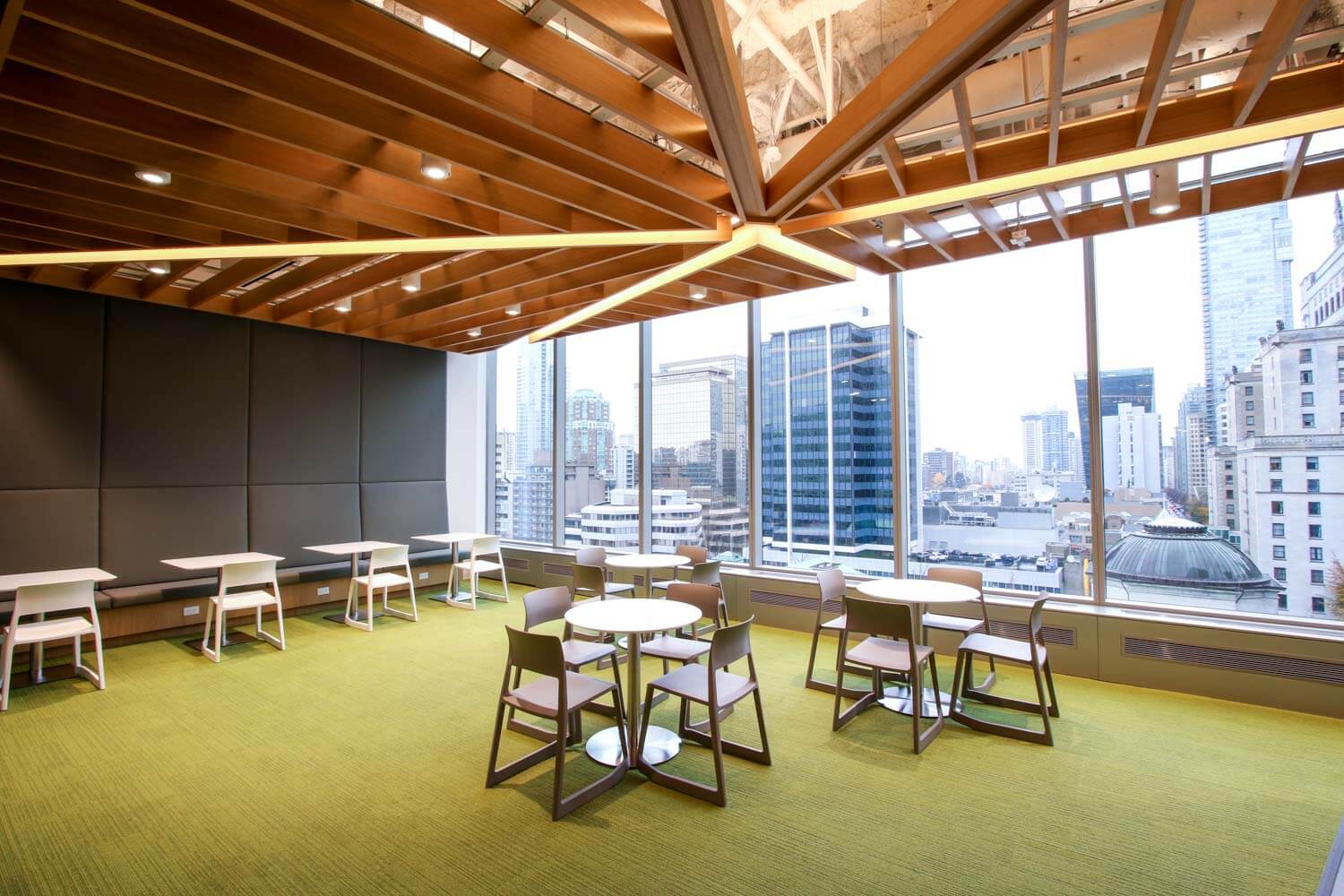 Designed by California-based architectural firm Clive Wilkinson, the office is inspired by the British Colombia landscape and organized into pop-up neighborhoods that are equally separated and open. 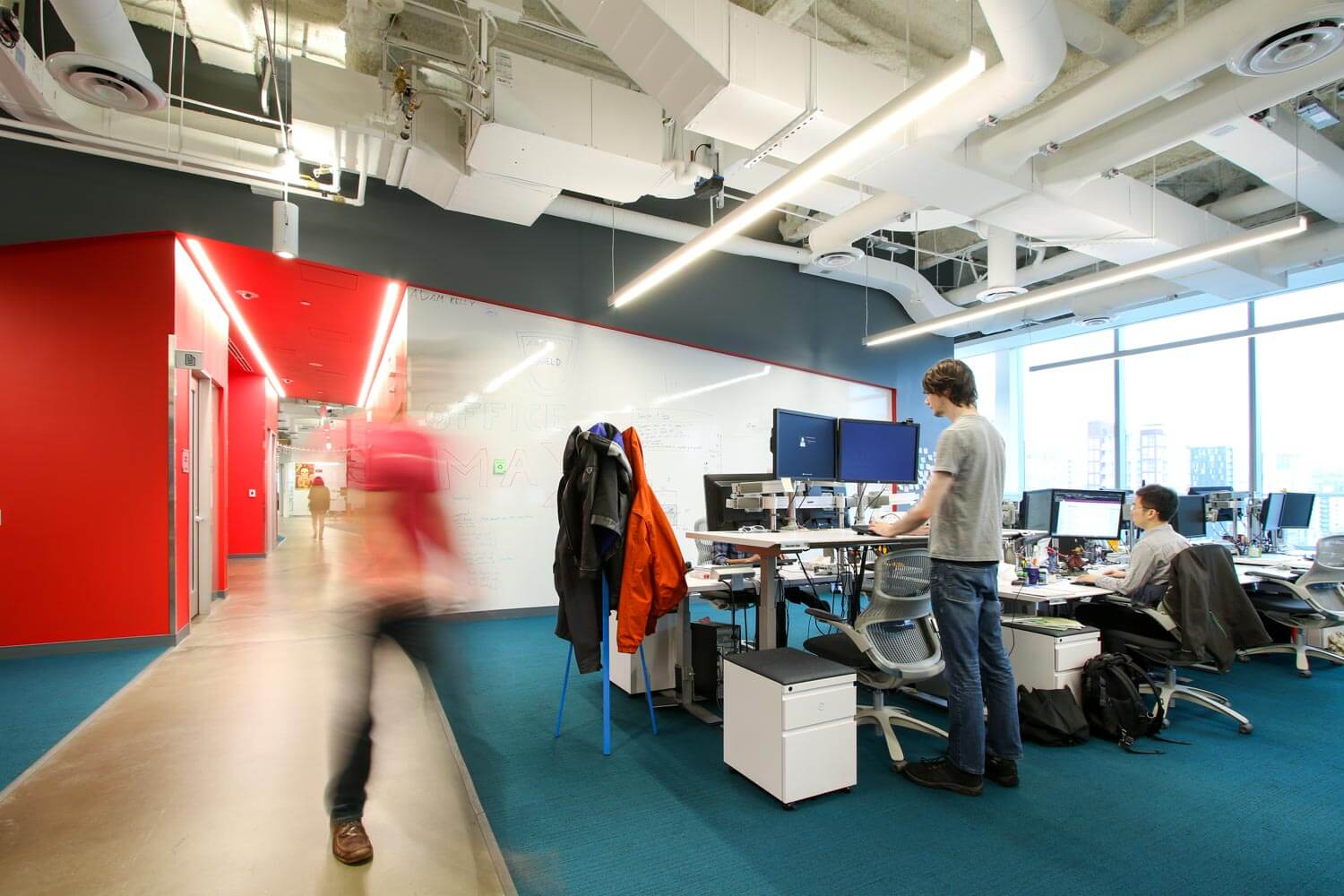 The top floor includes green and blue ‘leaves’ with warm wood lattice extending throughout the ceilings to represent a tree’s canopy. A central staircase represents a tree-trunk extending down to the lower floors to more jagged and earthy elements. The center of the office overlooks a courtyard, meaning you are never more than 45 steps away from a window with natural light. 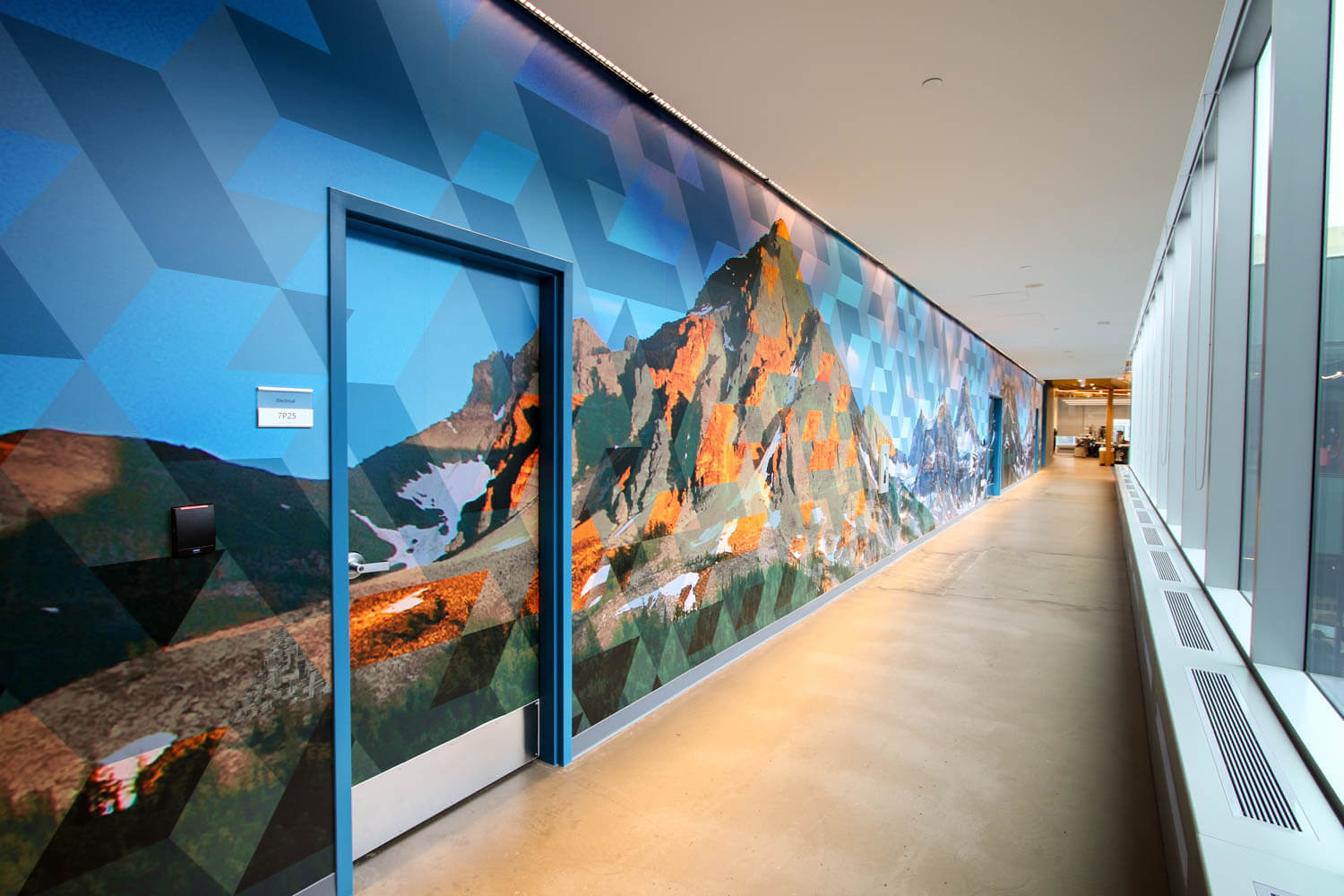 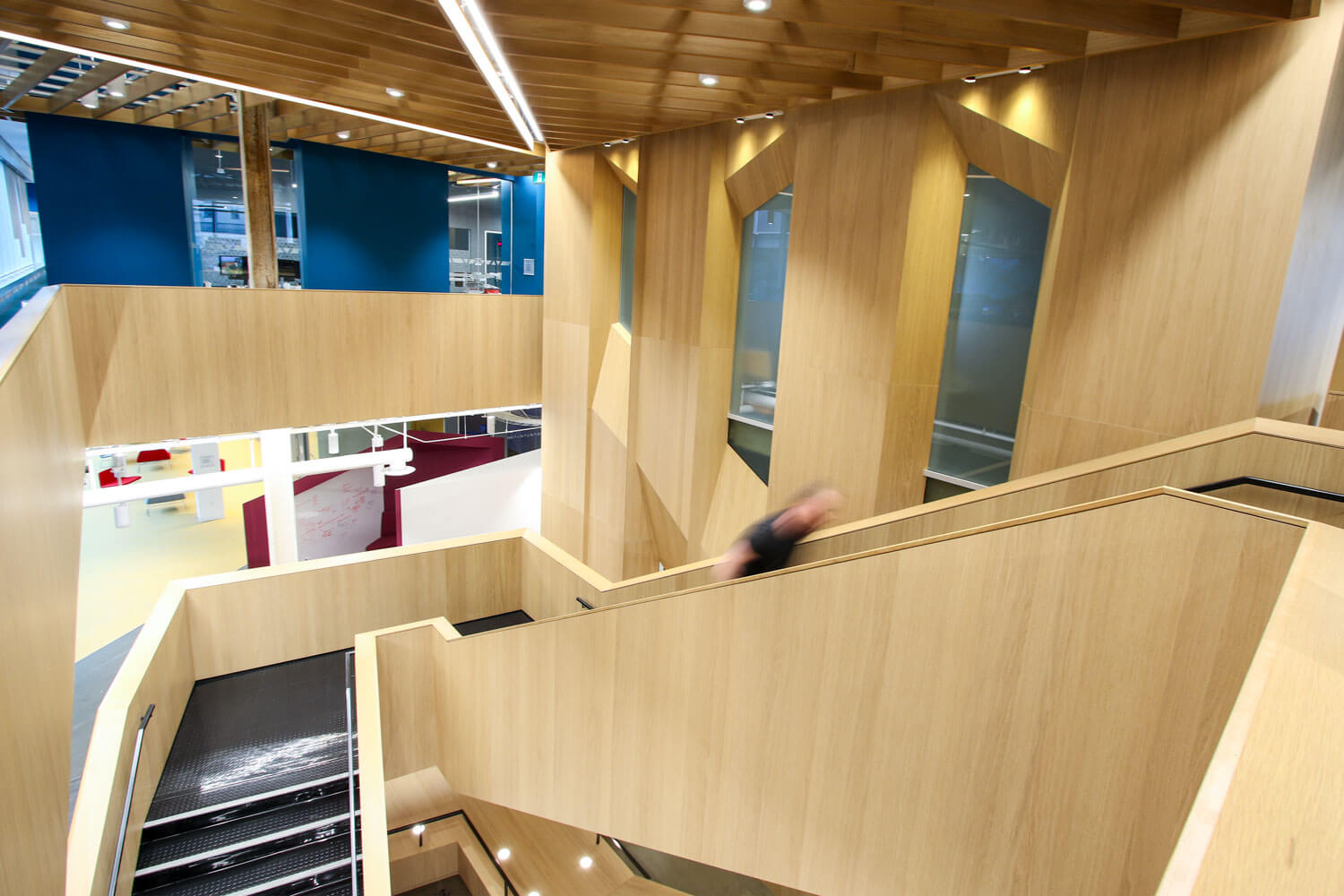 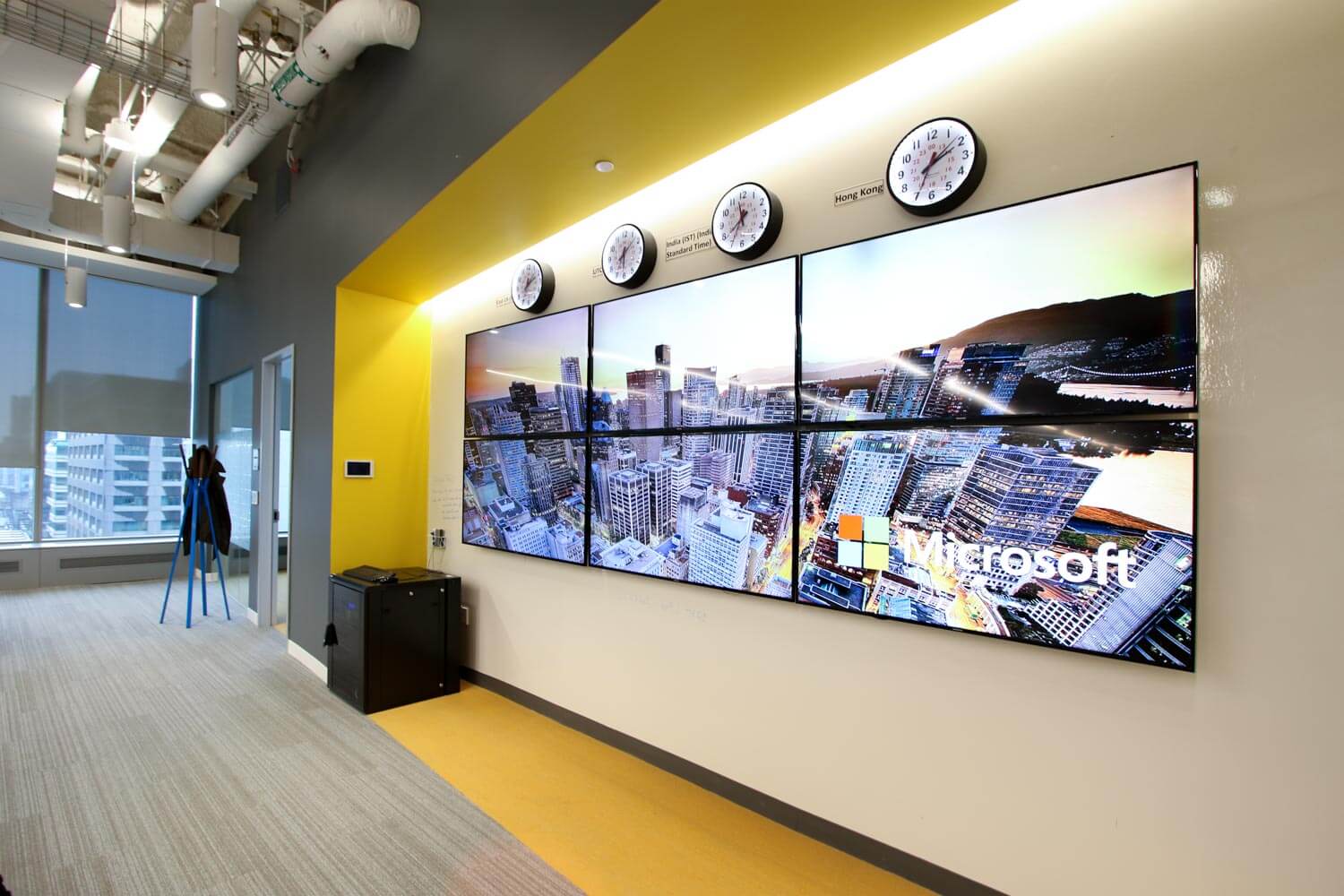 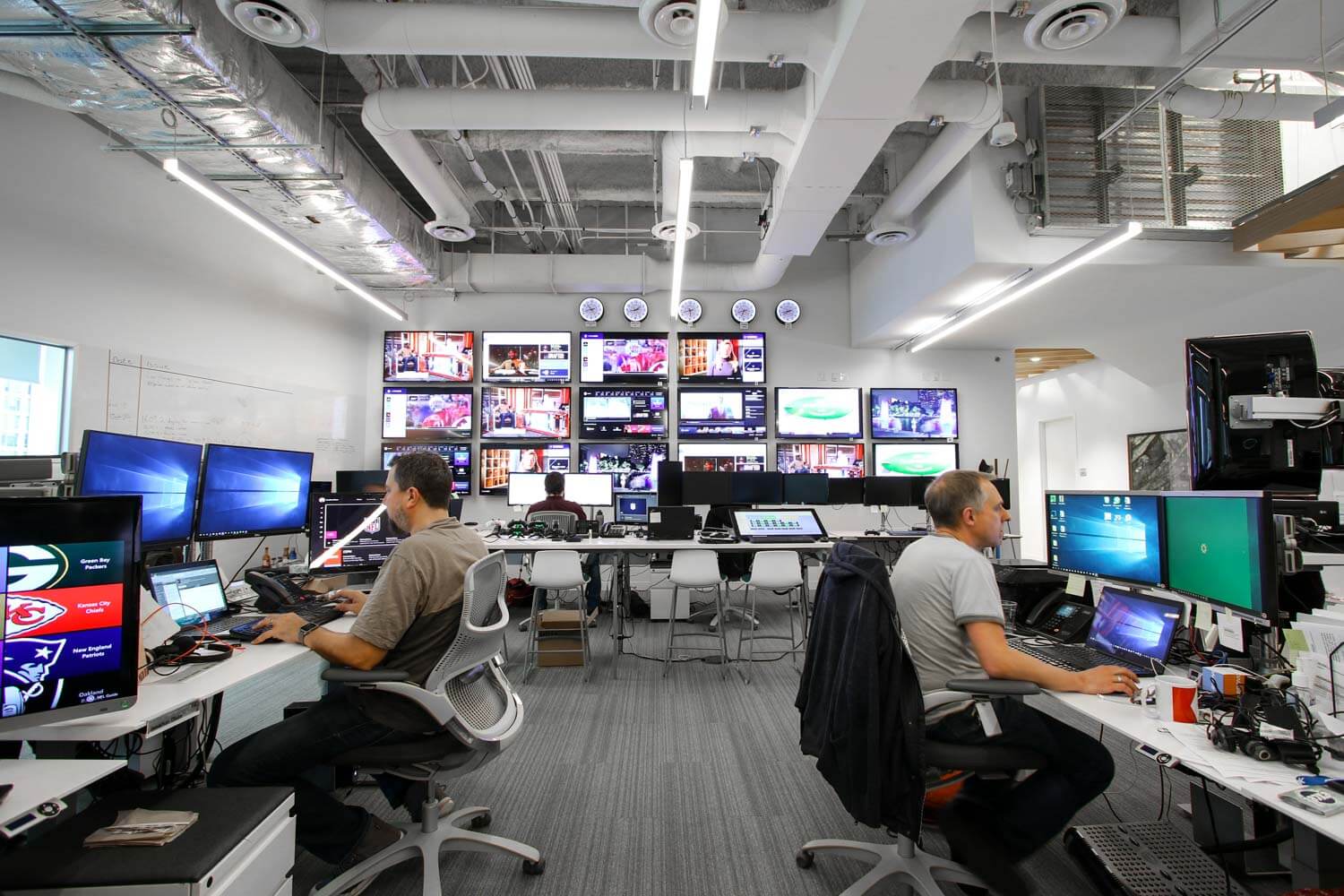 The office includes more than 160 phone rooms, focus and team rooms and conference rooms. Though conventional boardrooms are still present, there was a concerted effort to create non-conventional meeting spaces. In the same way the teams are separated but open, there are mid-hallway spaces designed to cocoon but at the same time open to passersby.

“It’s just different ways of trying to engage people in meetings. When you look at these types of rooms … this is a little more collaborative, little more inclusive of everybody, and at the same time you’re standing up, moving around, you can sit in a chair if you want to and you’re in and out.” – De Martin 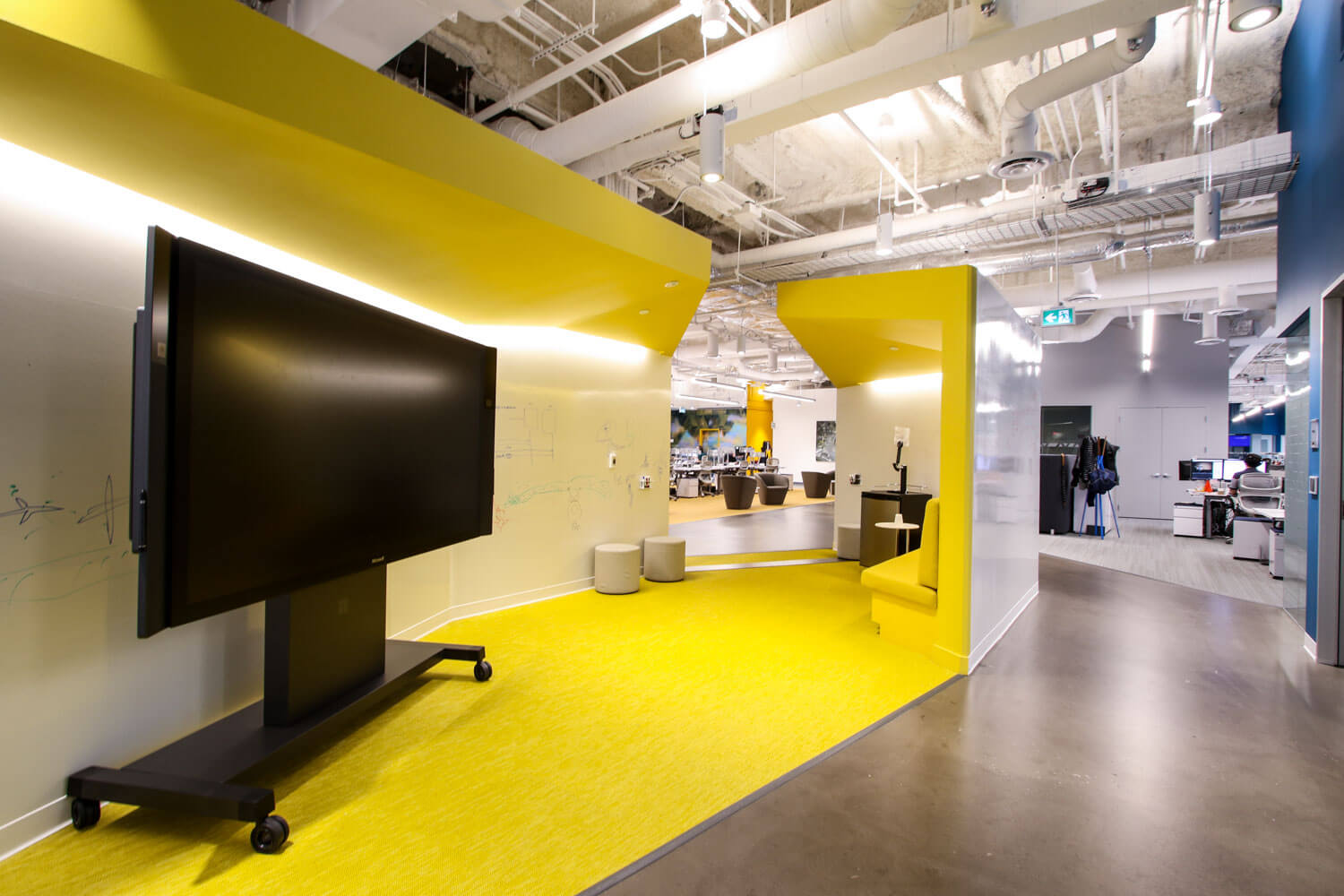 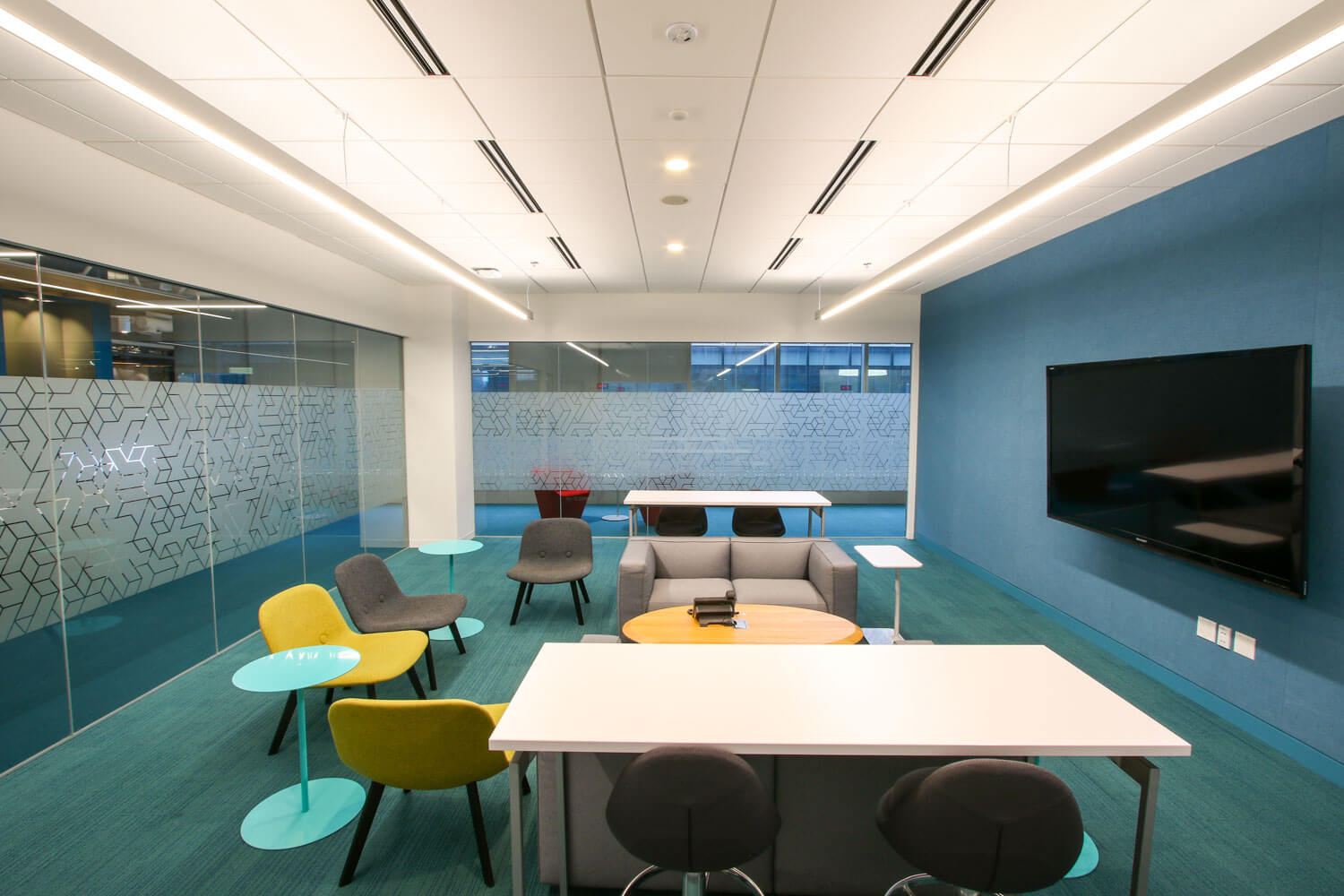 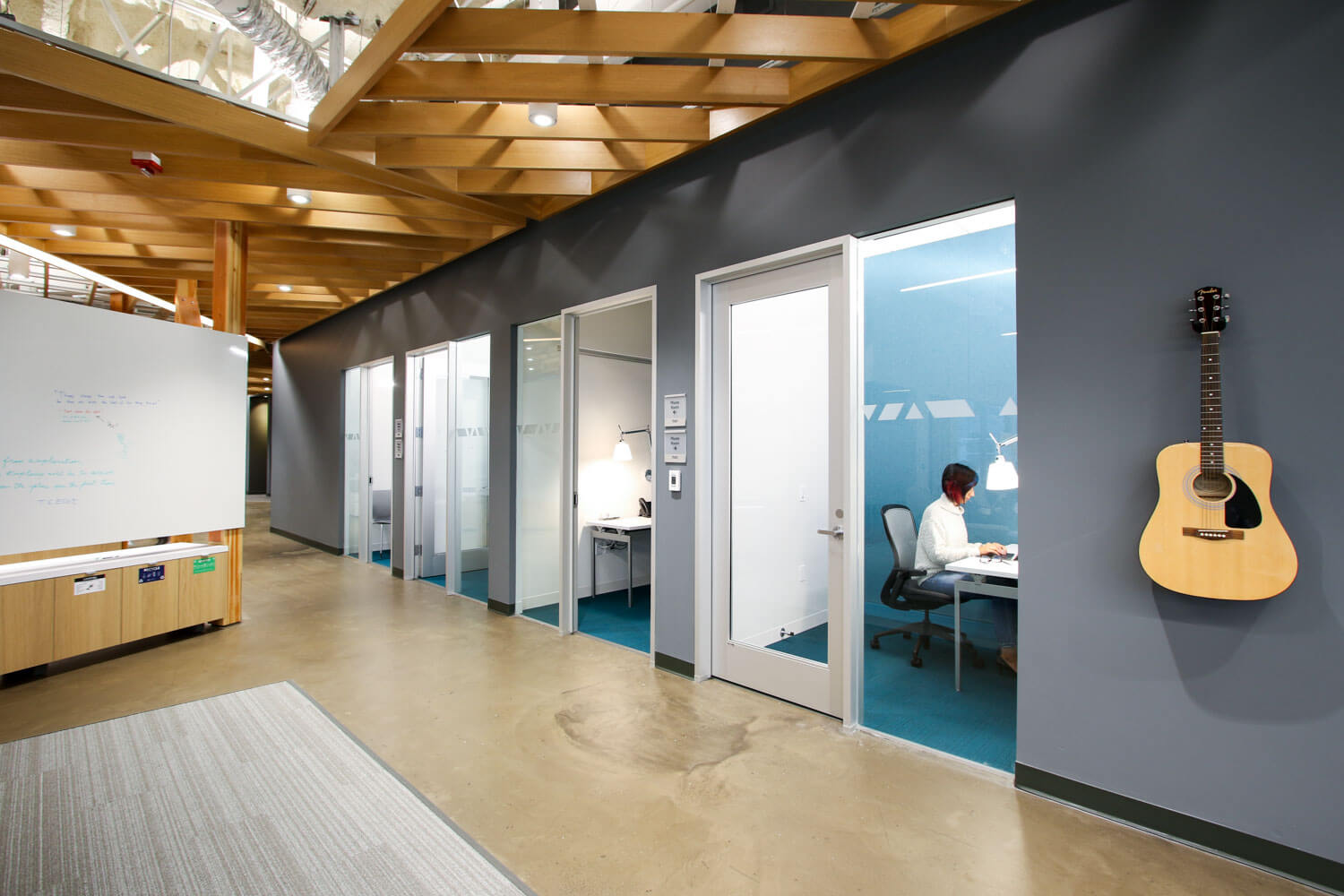 Despite having an office in the middle of a downtown shopping and dining district, the Microsoft staff are well-taken care of in-house. As employees enter the office in the morning they are greeted by friendly baristas brewing 49th Parallel beans. 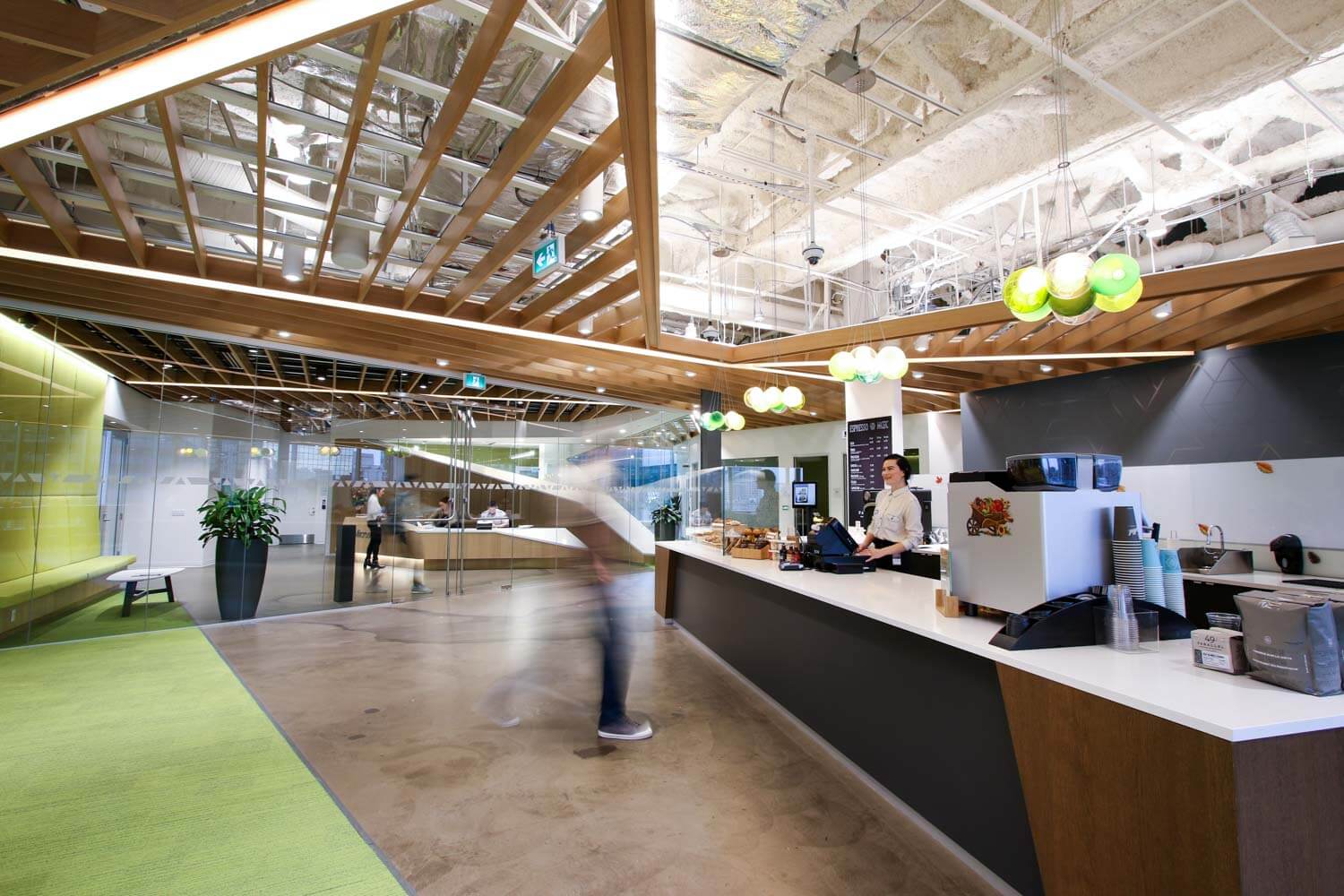 Within the office there are two massive kitchens offering fresh fruit, gorgeous views and ample seating. For the all-nighters there is a grab-and-go station with fresh sandwiches and snacks. 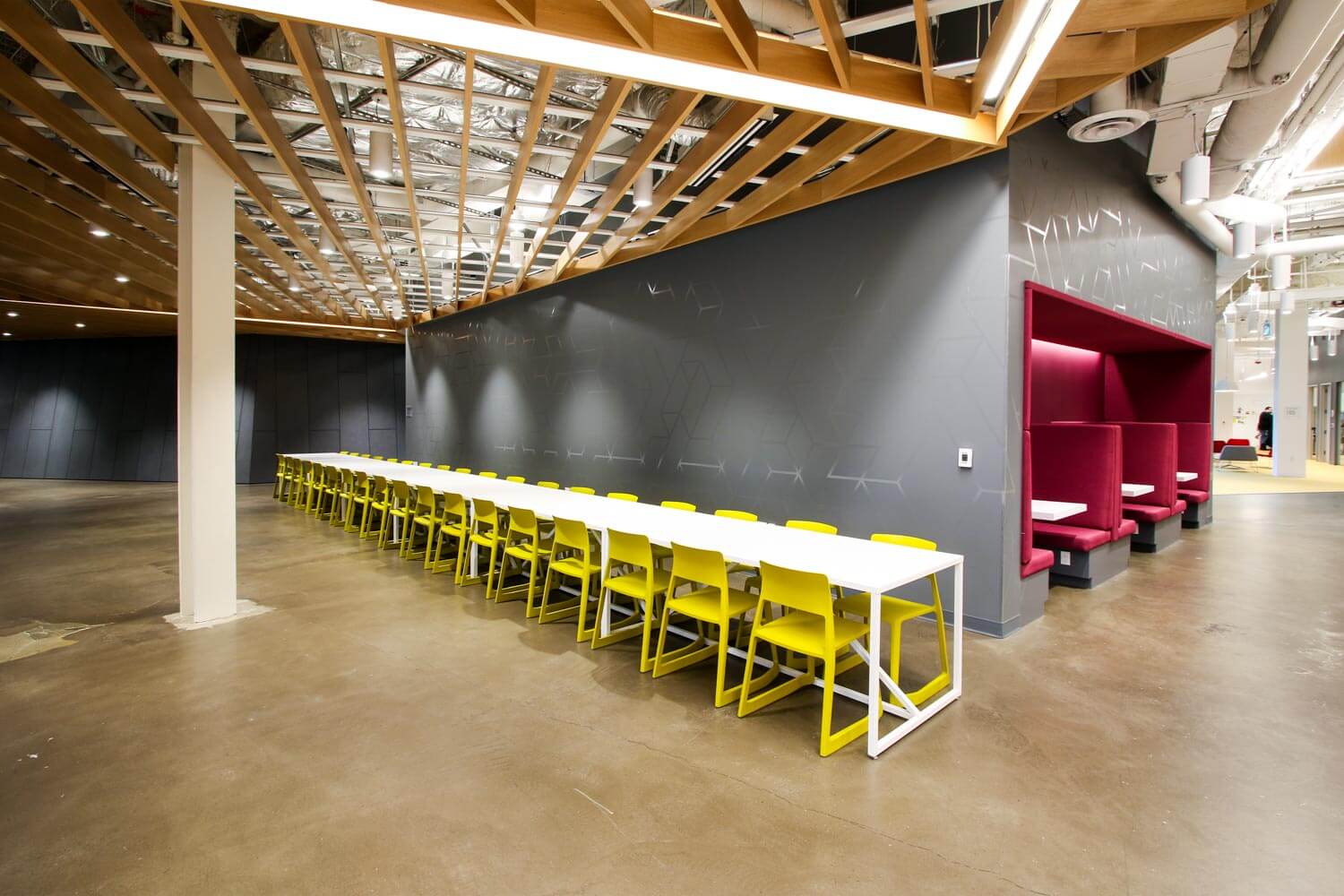 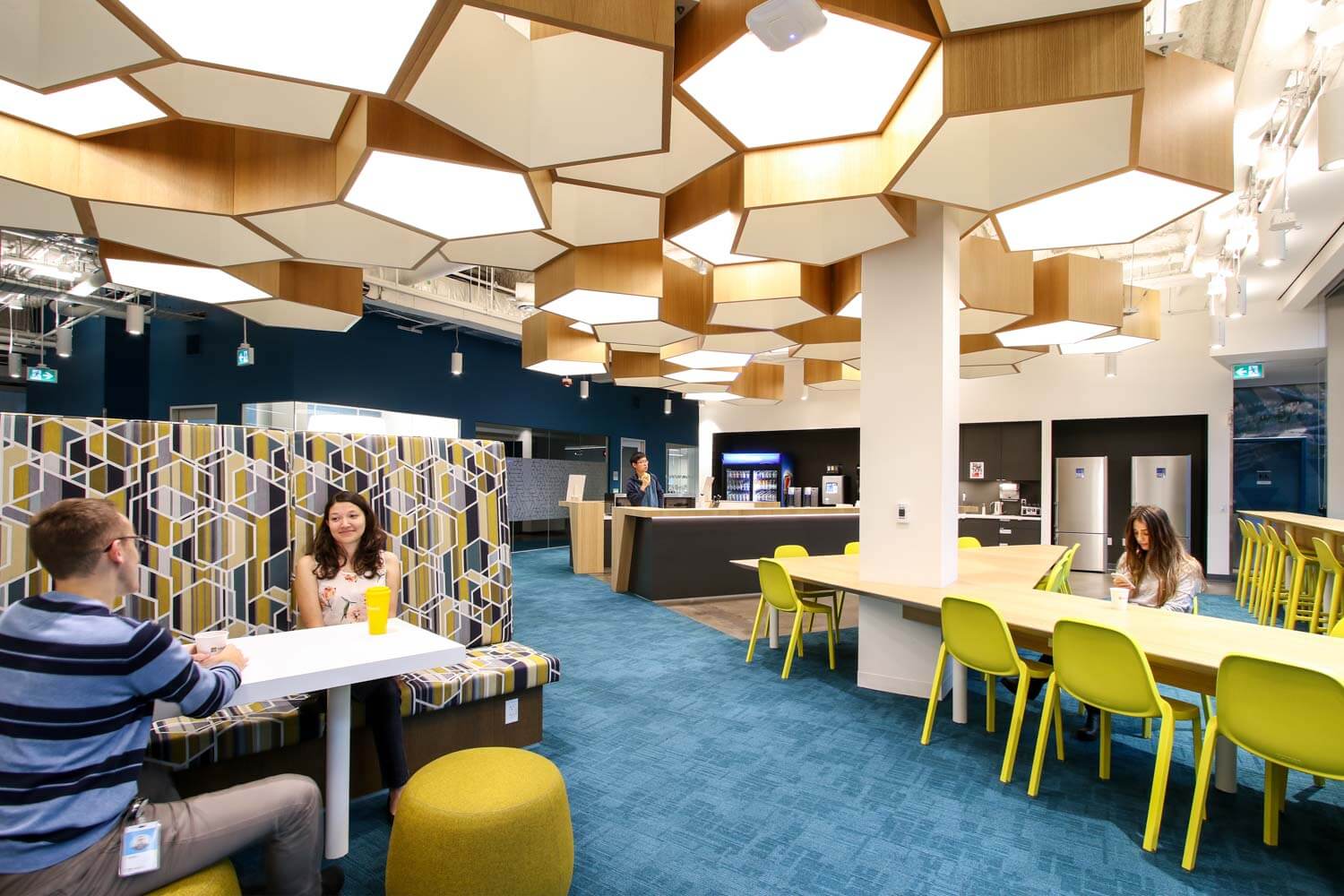 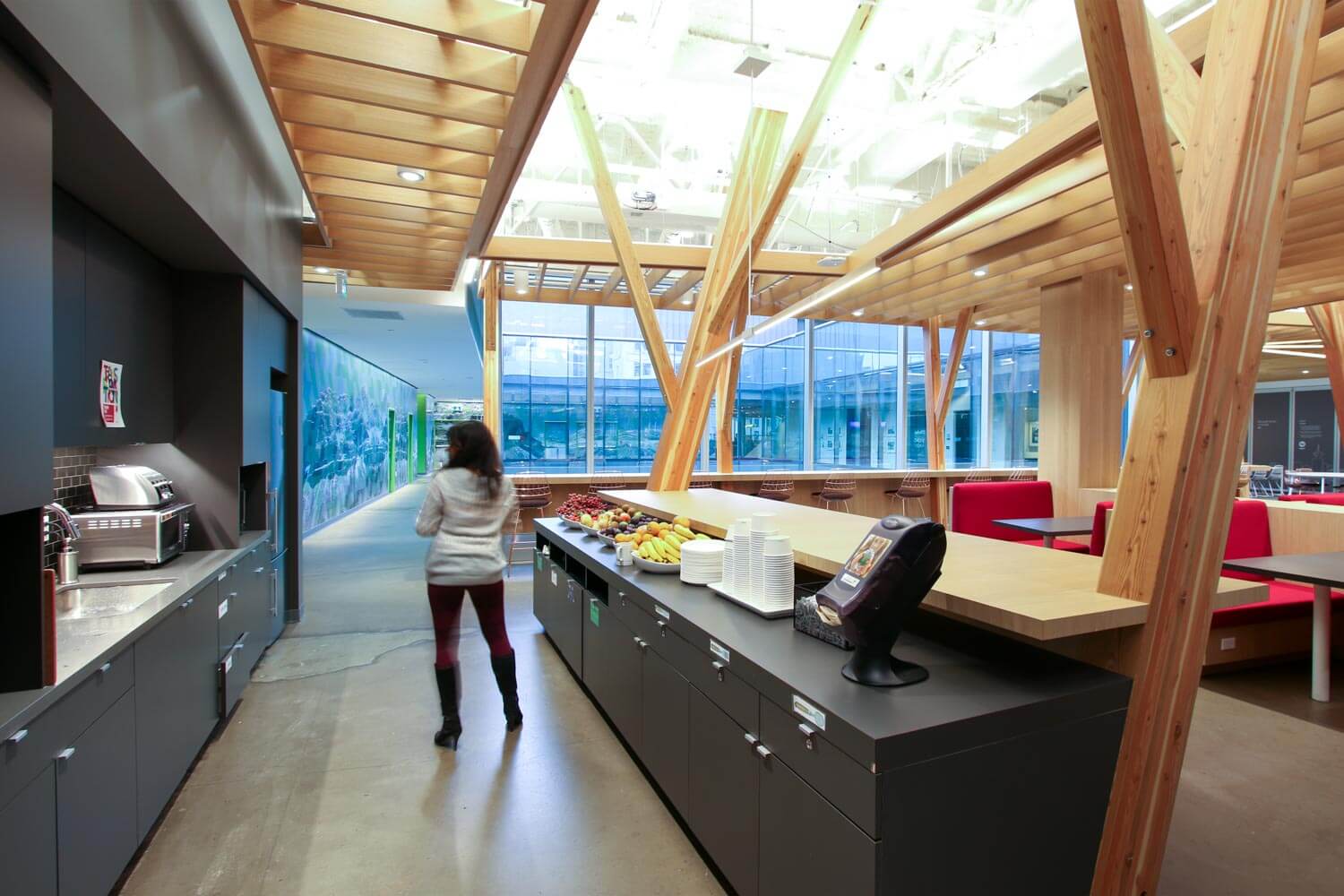 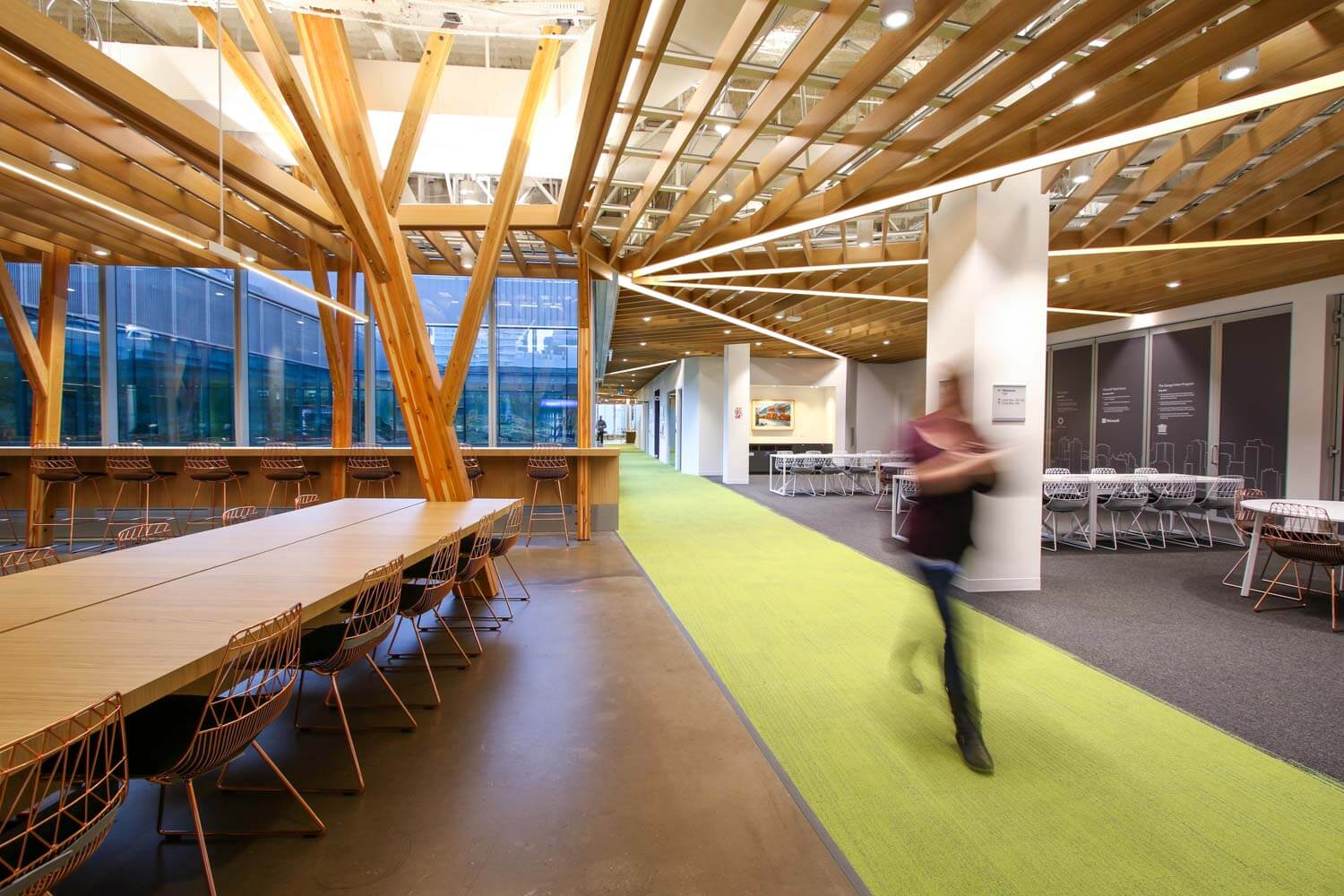 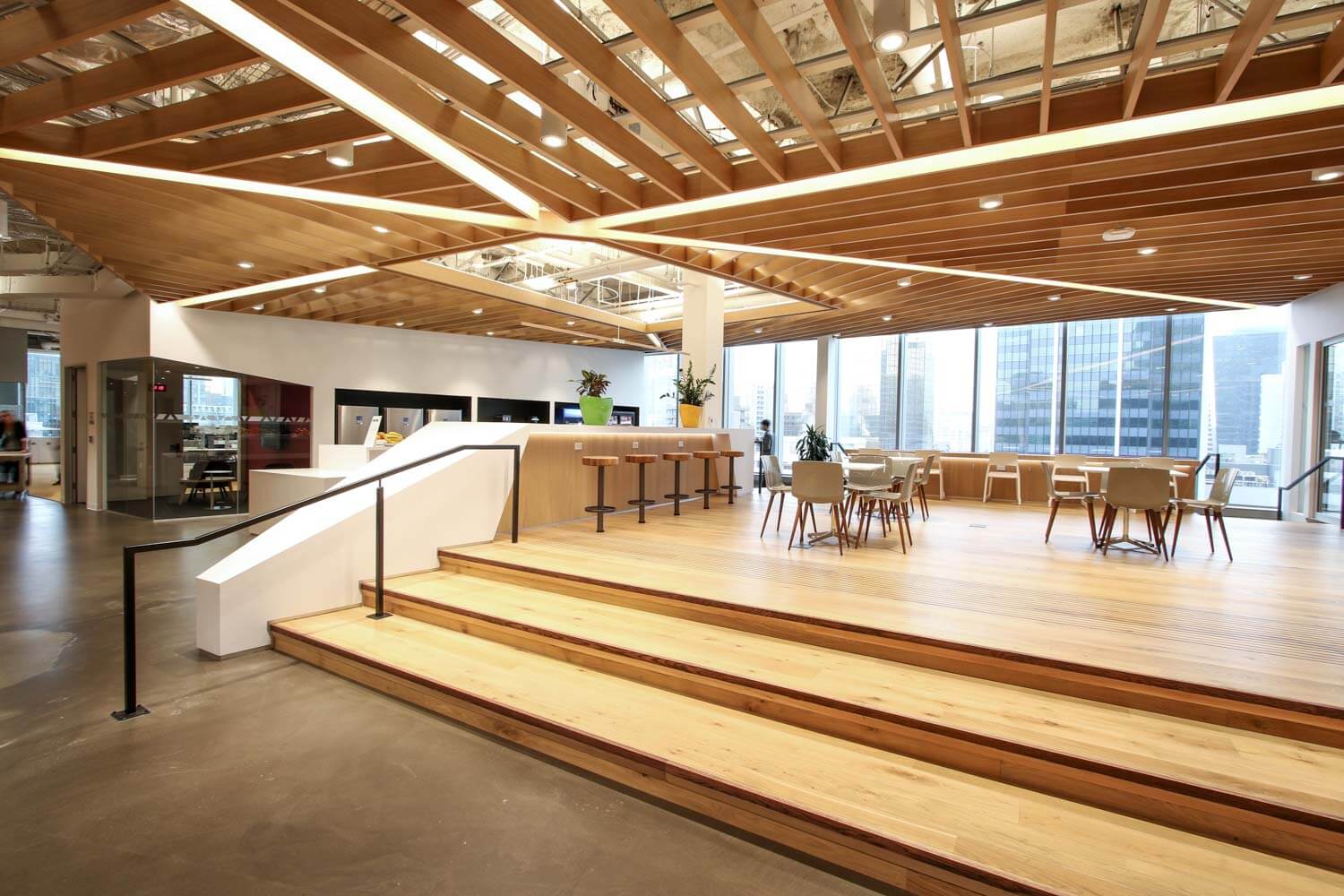 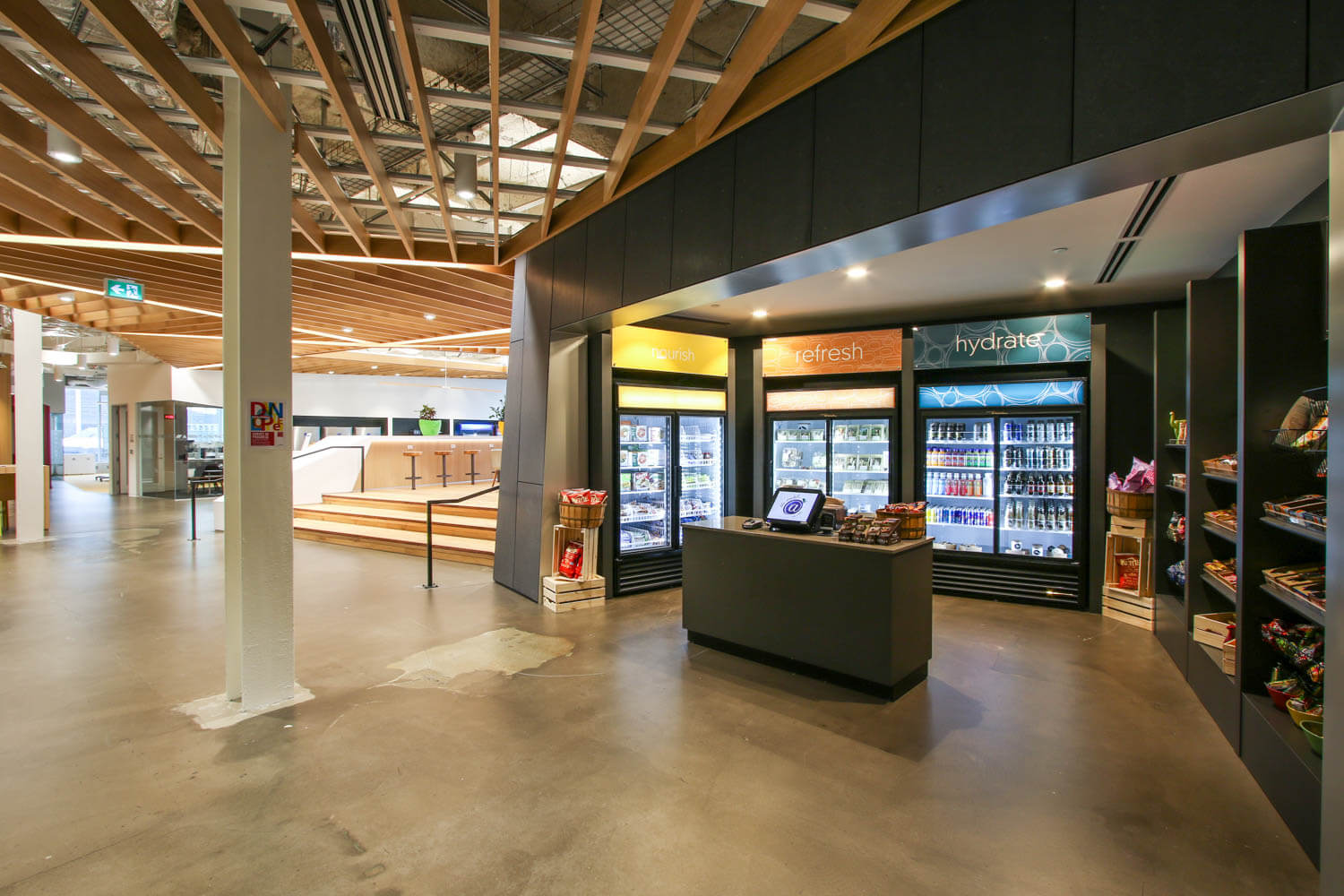 Each team is encouraged to create its own unique touch on its neighborhood. In this MSN space, each team member has their own (silly) portrait and info-sheet. 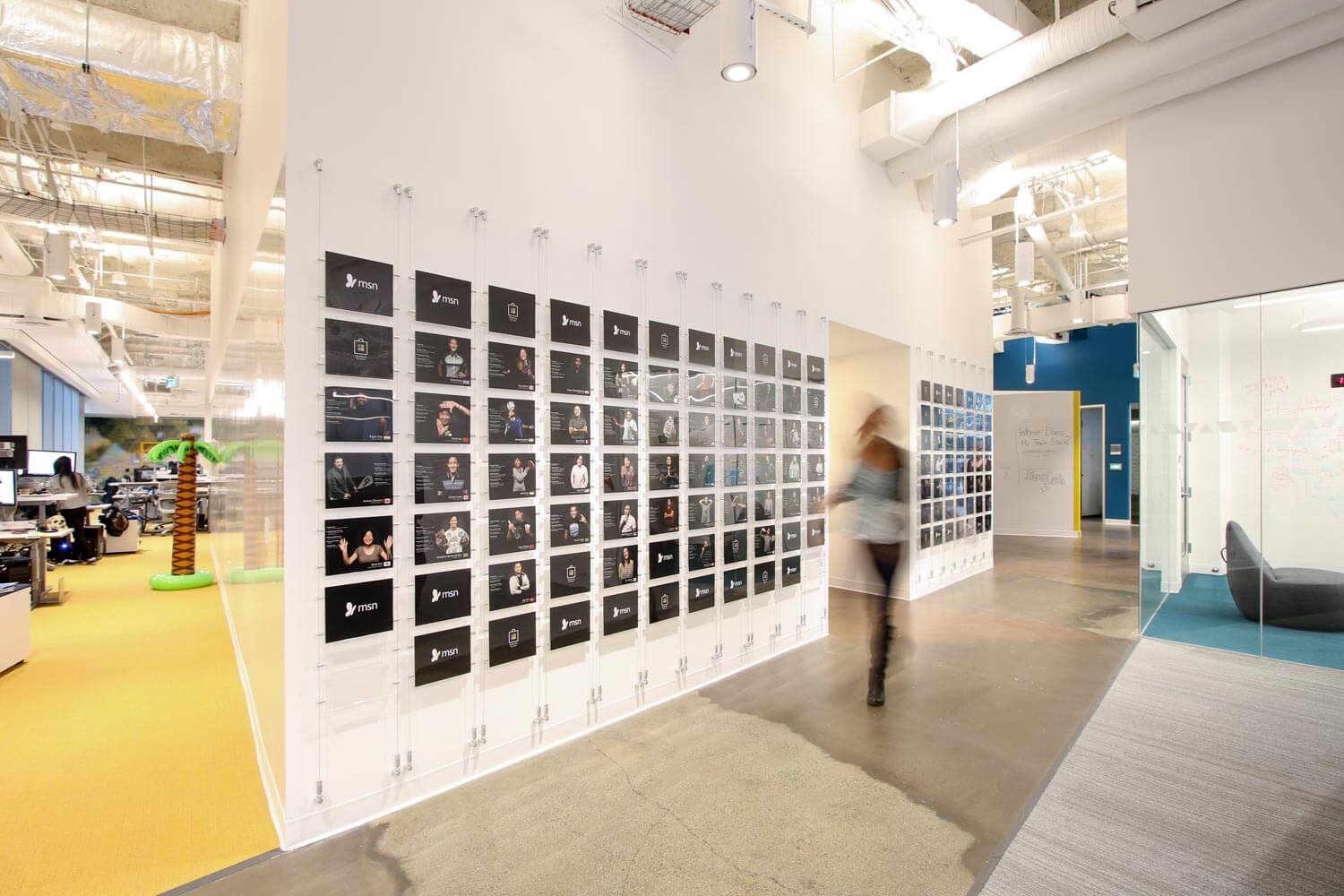 A unique feature in this office is a space they call The Garage. Considered the heart of the office, The Garage is a place for community, for being creative and making things.

Anyone can access the unusual tools: Universal laser cutter, several 3D printers, CNC milling machines, vinyl cutter and button makers are all available to staff for either work or personal projects. Aside from tinkering, the space is leveraged for community events, Meetups and coding boot camps.

Additionally, Microsoft’s Garage Intern Program operates from this office, inviting university level software engineer and design interns from across the country to experience product development from concept through to execution—and in some cases ship real products. 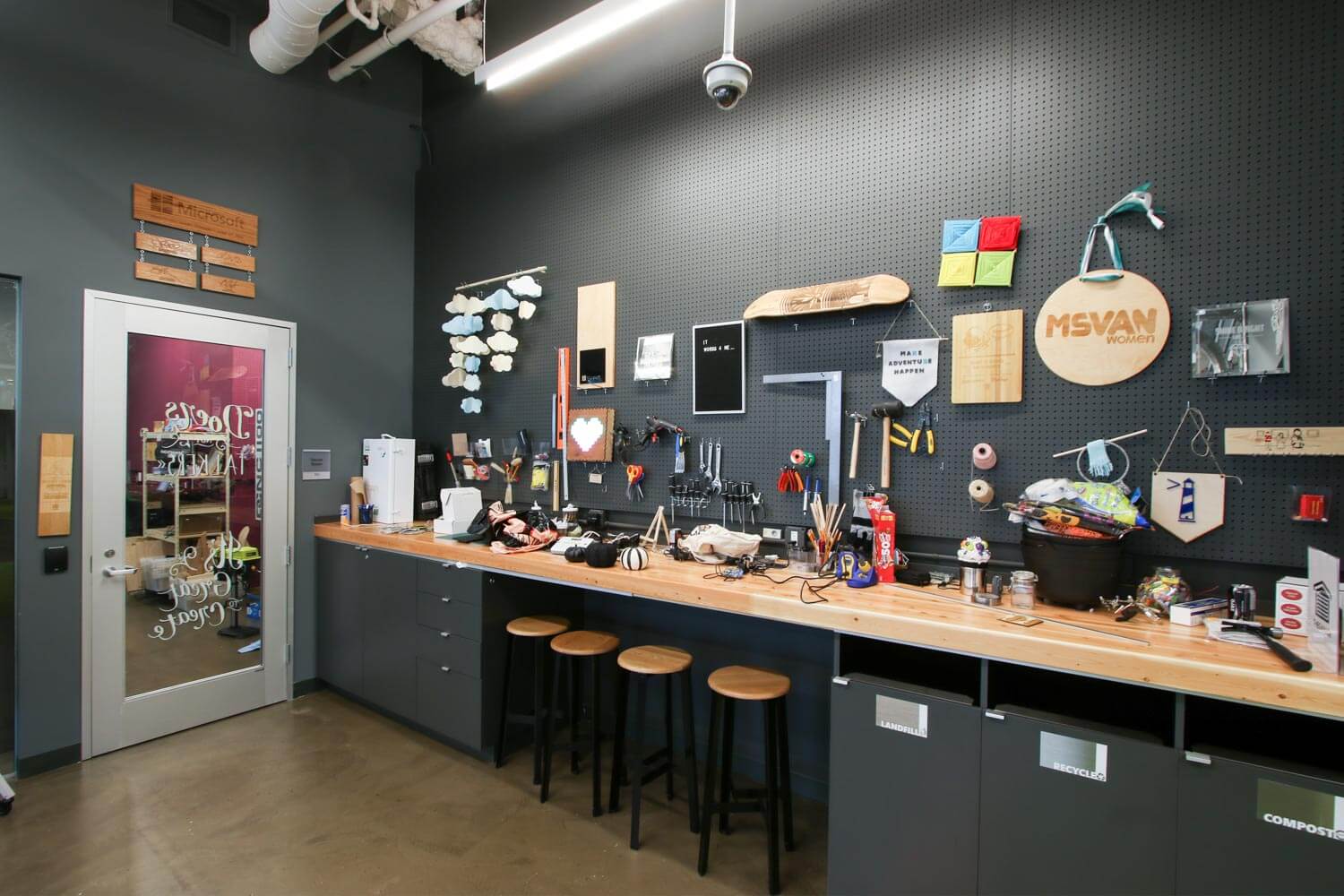 There are plenty of opportunities to have fun at work: foosball and pingpong table are ready for battle – not-to-mention a fully equipped music jam space. The house band gets to share their talent during the monthly social; a Friday night, “Tonight Show” format social. 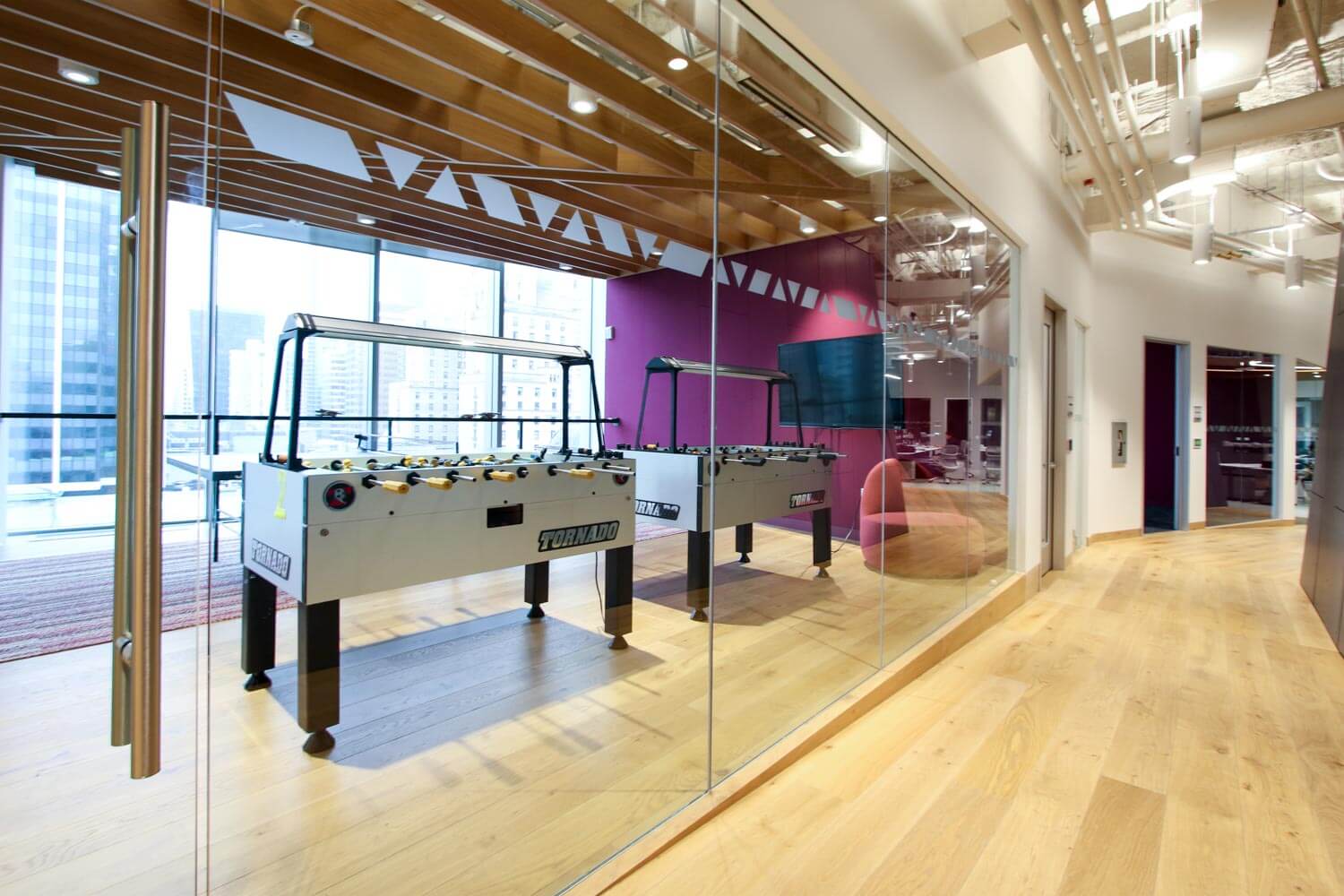 Although the office currently accommodates 745 people, there are still 300 empty seats which only speaks to Microsoft’s further investment in the Vancouver technology industry. 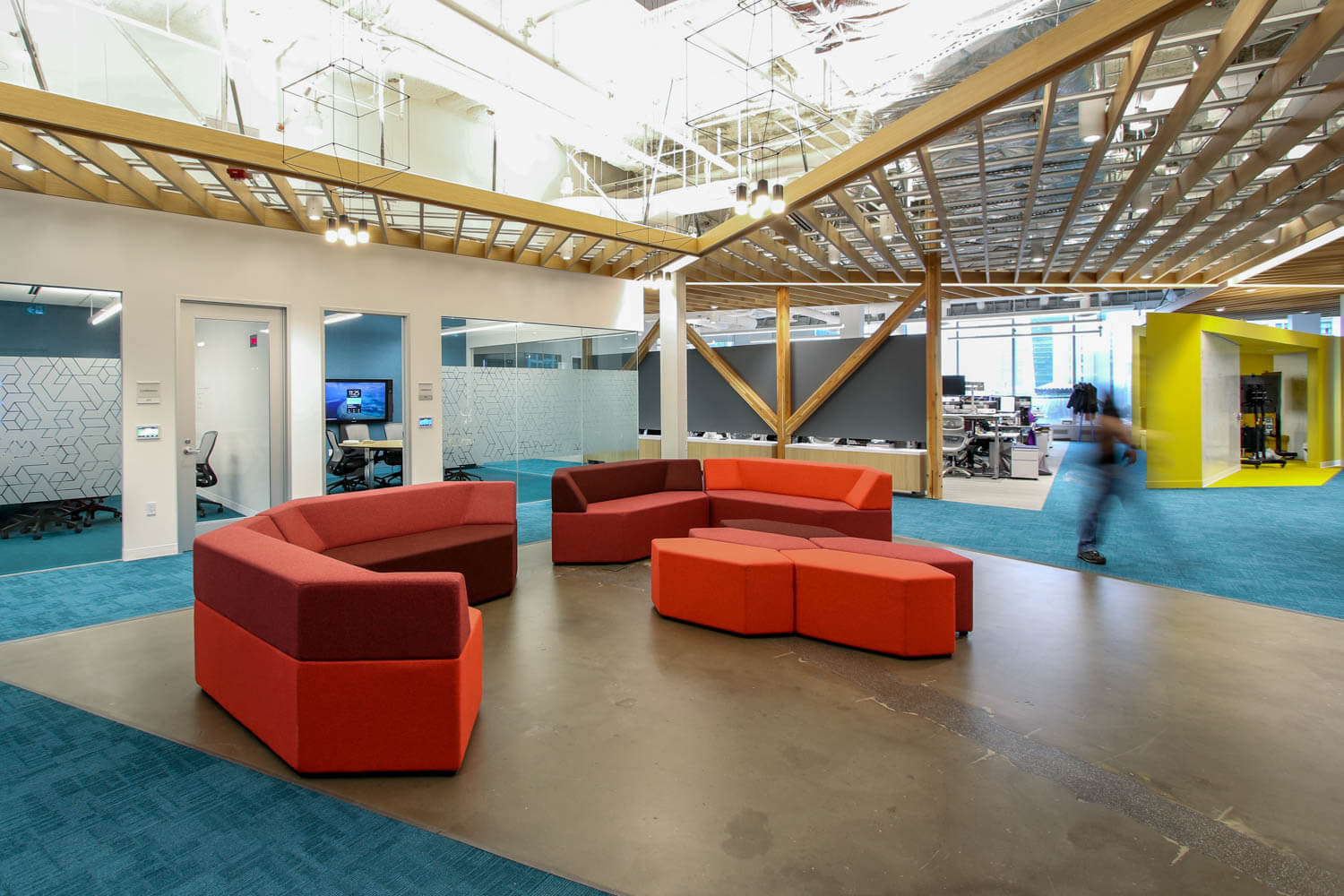