Over the past several years, Shopify has cemented itself as a global e-commerce leader, taking seemingly every opportunity to grow their platform, their merchants and their teams.

The Ottawa-headquartered company’s started as an online snowboard shop in 2004. ‘Snowdevil’ was built by co-founder and current CEO Tobias Lütke and partner Daniel Weinand, though they soon realized the potential was in the cloud and not on the slopes.

Lütke and Weinand launched the Shopify platform in 2006 as a customizable online-storefront builder—something that would have helped streamline Snowdevil’s early days. Designed for small and medium-sized businesses, Lütke and Weinand started up what today is the go-to cloud-based, multi-channel commerce platform.

All it takes is a quick look at the numbers to see that Shopify is nothing short of a global—and still growing—success: 2,000 employees, a successful IPO, powering 500,000 stores in 175 countries, and facilitating $40 billion in sales.

Recognizing how an e-commerce platform could better power enterprises to scale quickly, Shopify created a solution for high-growth, high-volume merchants who want to grow bigger, faster: Shopify Plus. 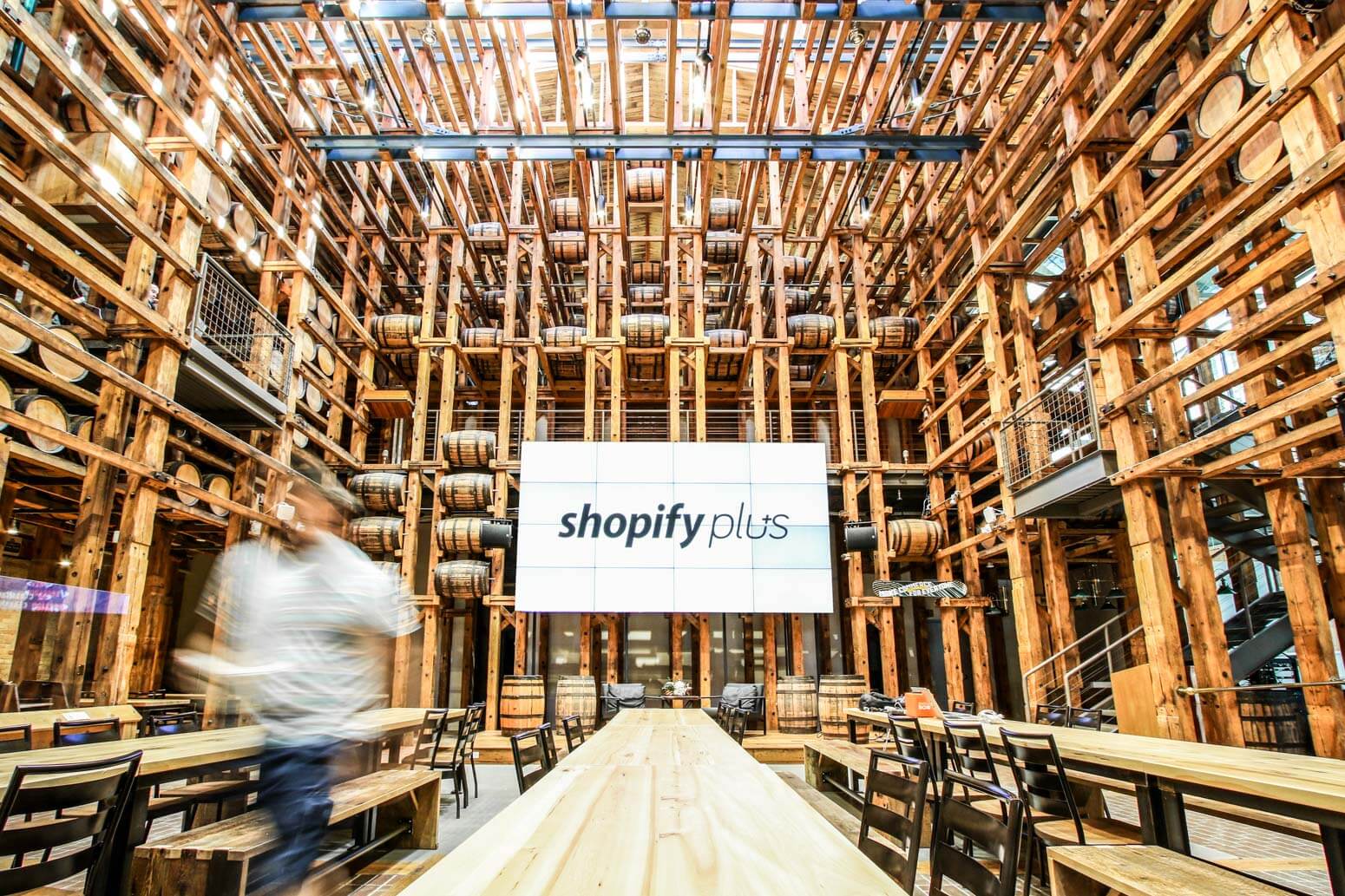 Launched in 2014, Shopify Plus is a separate platform for large enterprise merchants that need a customized product offering, but without the price tag or wait times tied to other market offerings.

From startups to Fortune 500s, some of the world’s fastest growing brands are powered by Shopify Plus, including fitness apparel Gymshark, watch empire MVMT and, yes, even Kylie Jenner’s Kylie Cosmetics.

With celebrity entrepreneurs and billion-dollar online brands buying into Shopify, the company expanded to Waterloo in 2016. Now nestled inside a 19th century whiskey distillery, the Shopify Plus team has found a truly jaw-dropping and inspiring home. 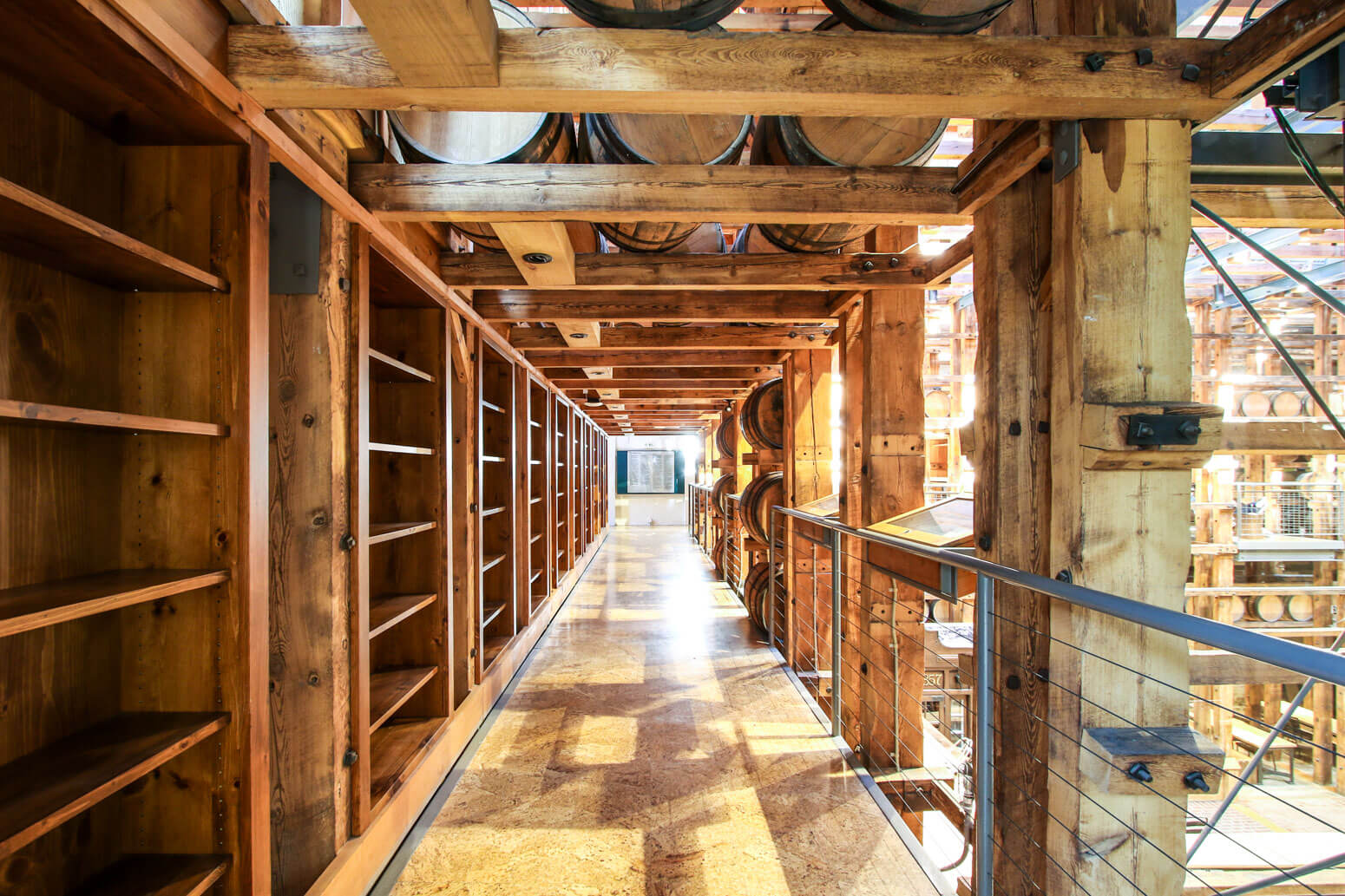 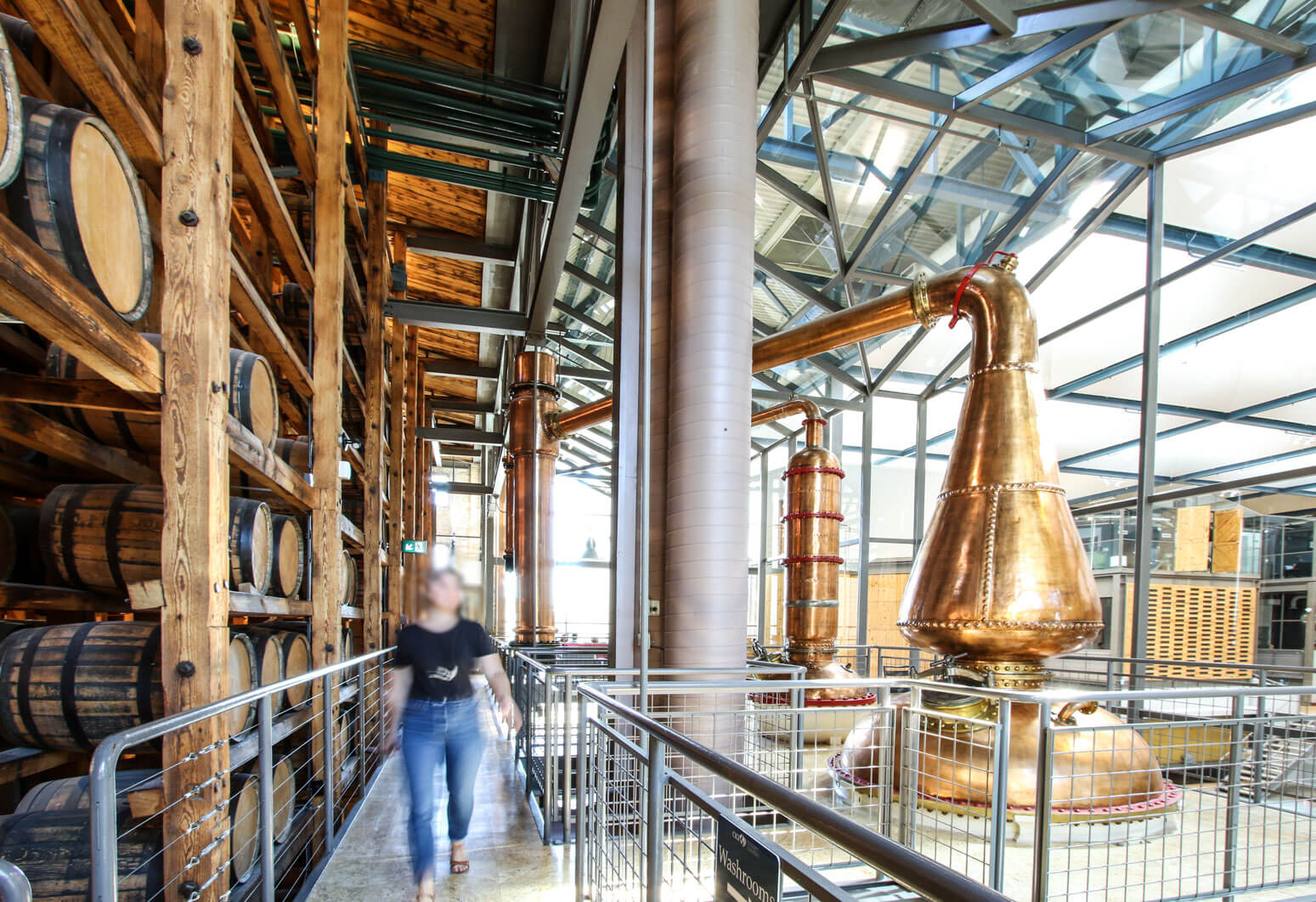 Shopify set up shop in Waterloo’s Barrel Yards, the original barrel storage area for Seagram’s Whiskey. An addition was built in 1984 and further modernized by Kitchener-based integrated design firm WalterFedy before the team moved in last September.

Nestled inside the former distillery is the Shopify Plus team, where sales, product, engineering and creative teams service the company’s enterprise clients. Since they moved into the distillery in late 2016, the team has grown from 50 to more than 250, making it clear that Shopify needed to expand. This is why they are opening an additional 55,000-square-foot office just across the street. 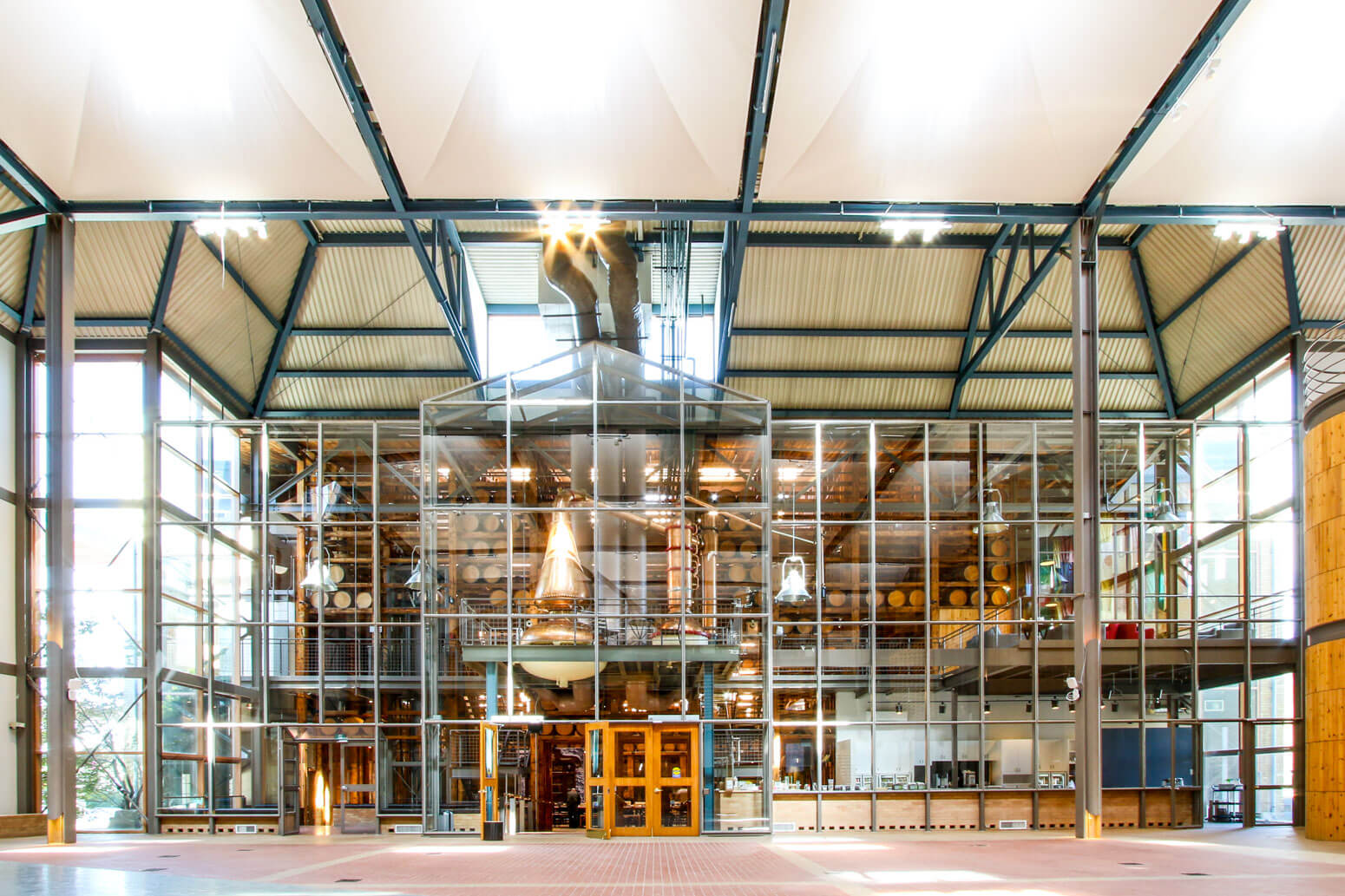 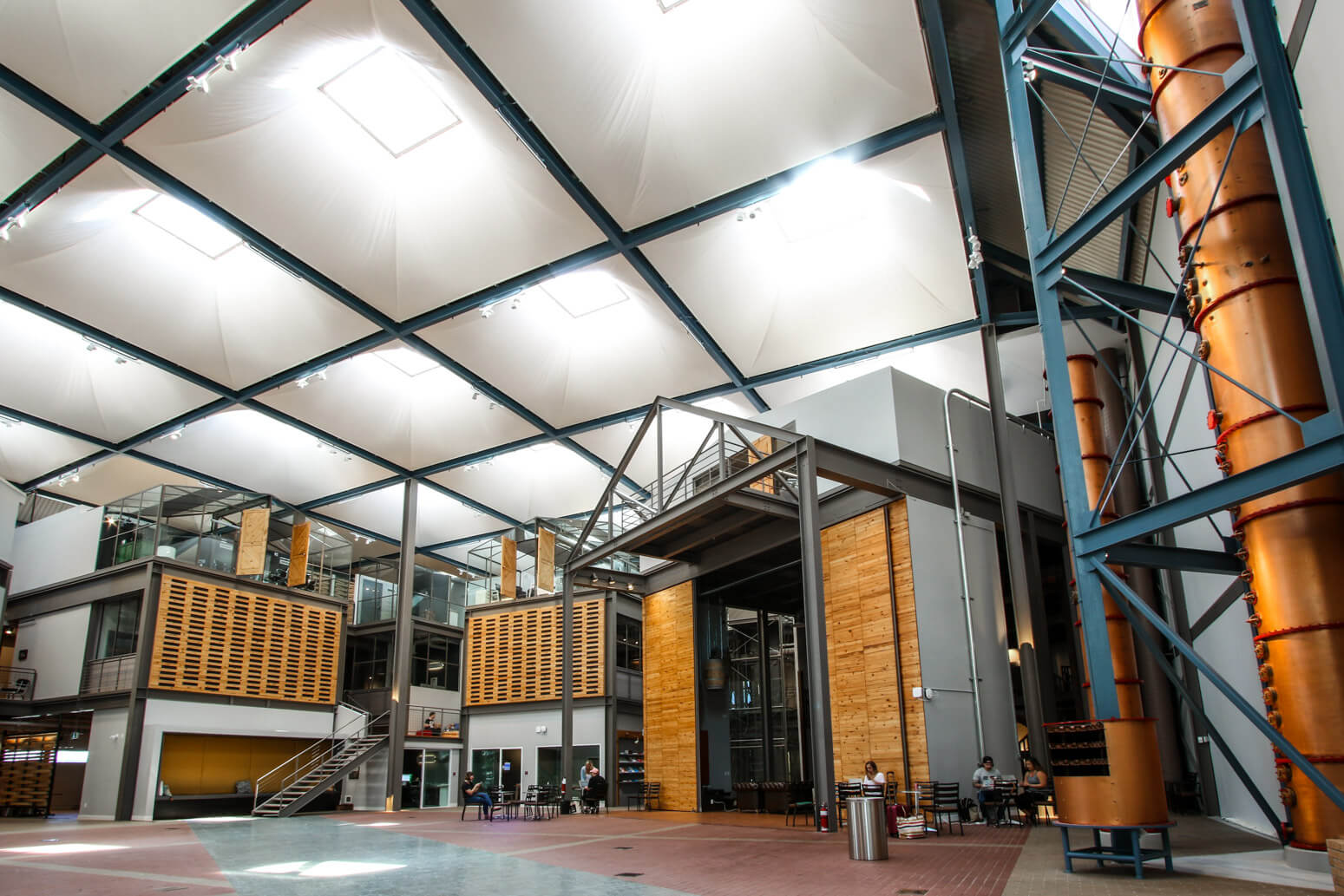 In the 45,000-square-foot Waterloo office, the whiskey-making history was embraced, keeping the original distillery equipment, packaging and dozens of whiskey barrels that give the revitalized space old character.

Like all of Shopify’s offices, the Waterloo space has open work areas along with more private and quiet pods, pairing rooms and phone booths, creating a diverse work environment to please all working styles. Employees can also escape to one of the many nooks that overlook the great entry hall below. 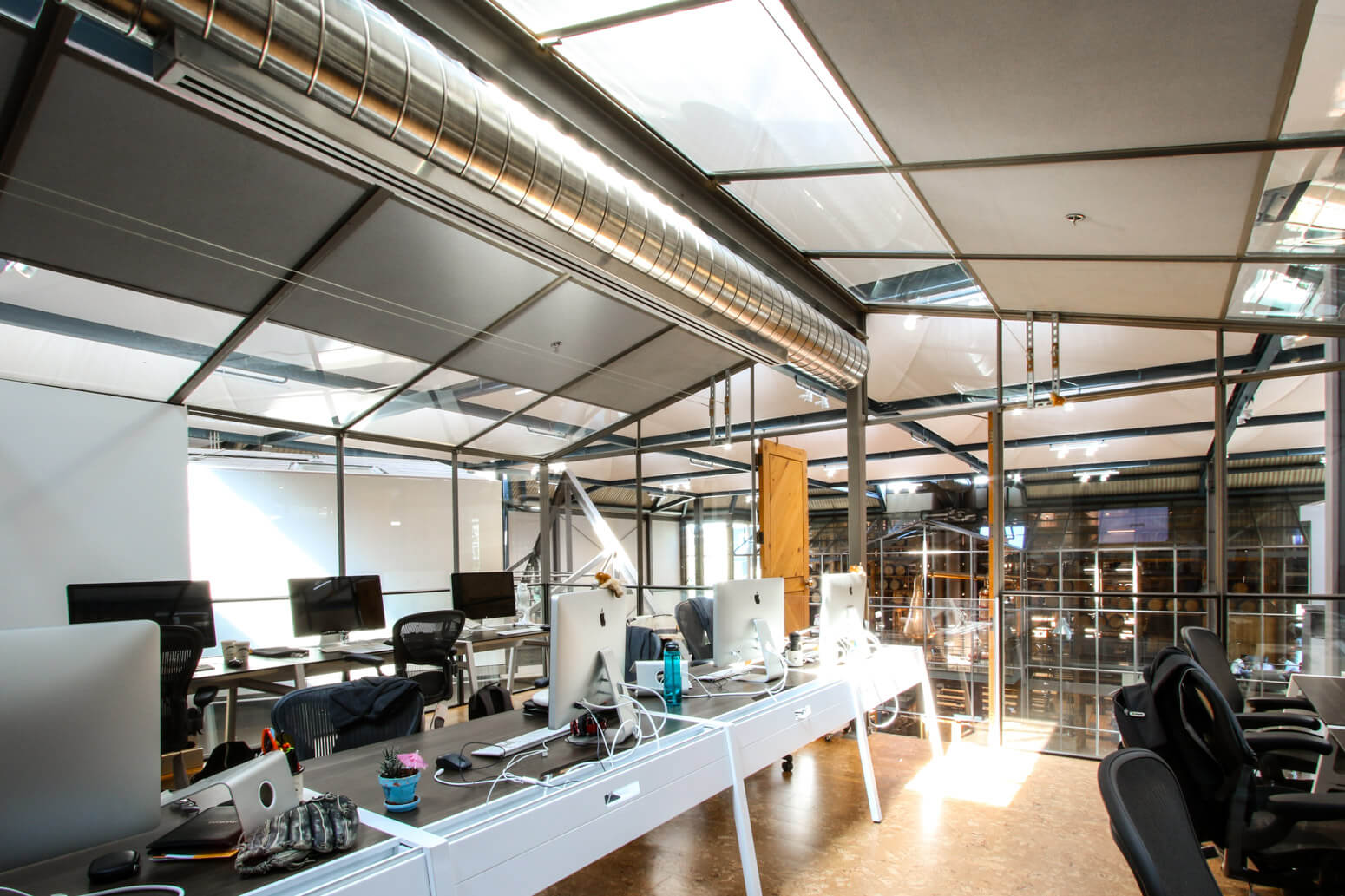 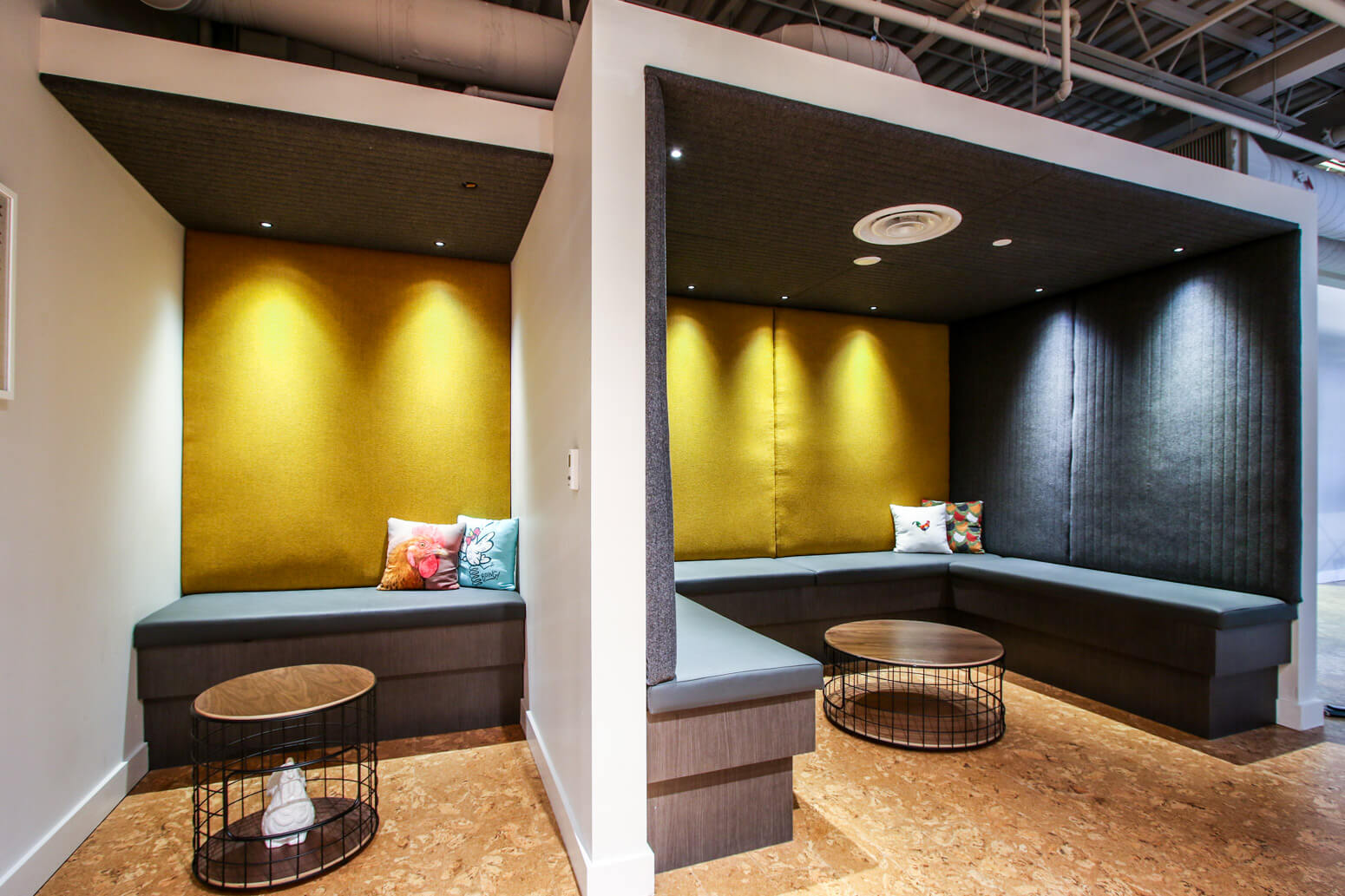 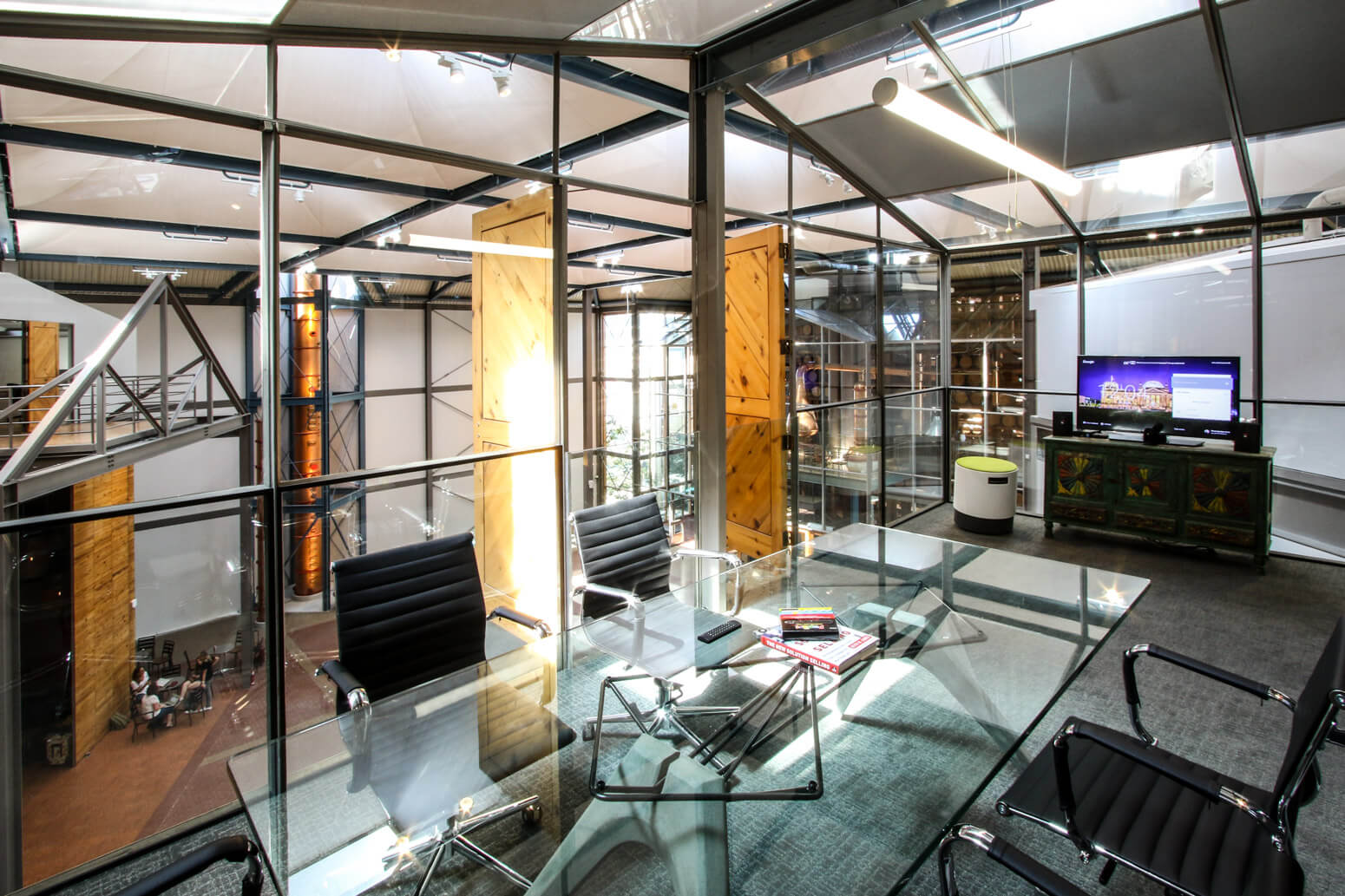 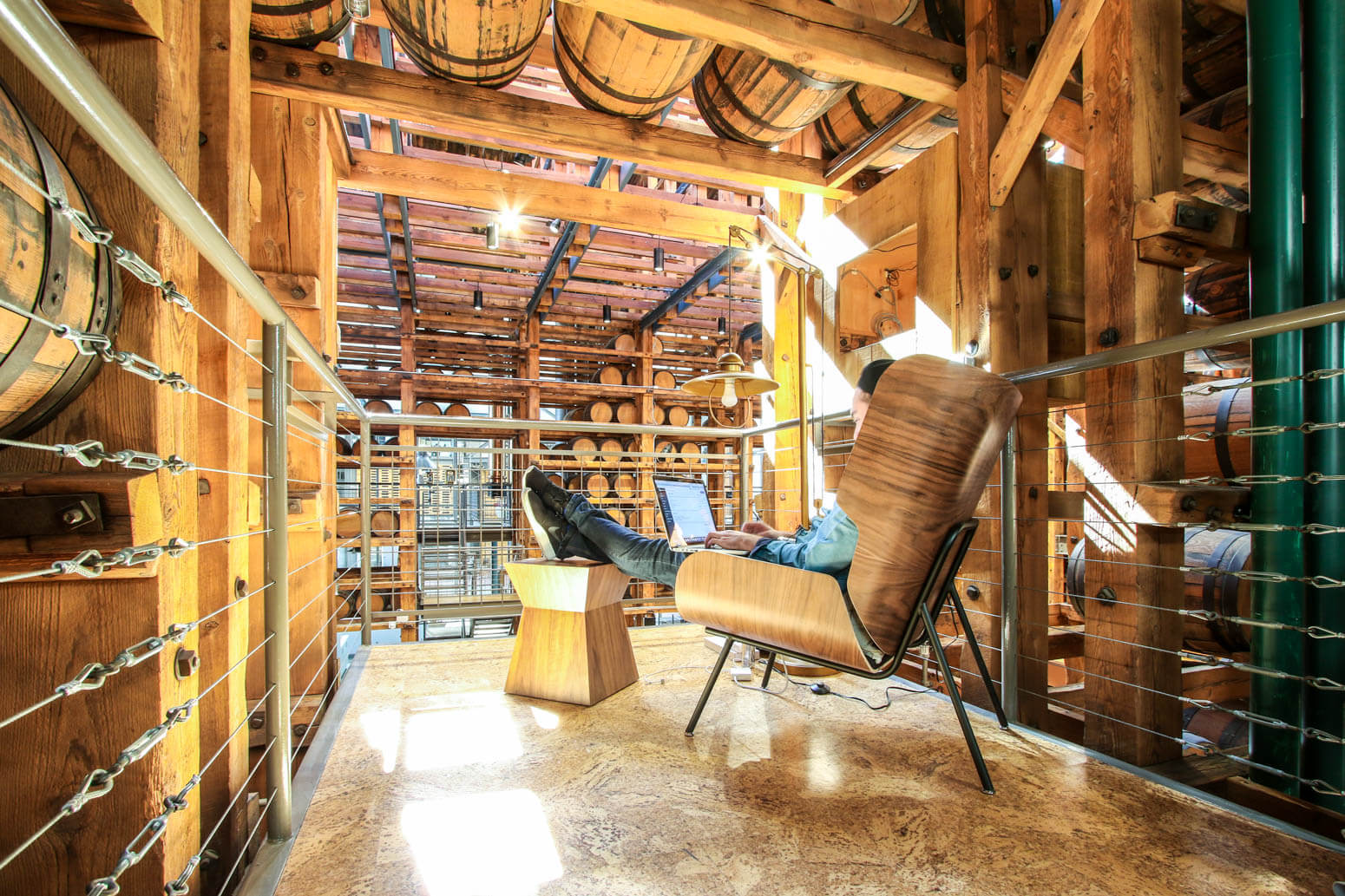 Gender neutral bathrooms and a sanctuary space for prayer, meditation and reflection are features that echo Shopify’s inclusive nature and their respect for employee’s privacy. The office also contains a library and virtual reality arcade room, giving employees different options for how they want to take a break, whether that’s getting lost in a book or a VR game.

The meeting rooms are a nod to the building’s historical and whiskey-making roots with names like Forty Creek, Moonshine, On the Rocks, and Shaken Not Stirred. 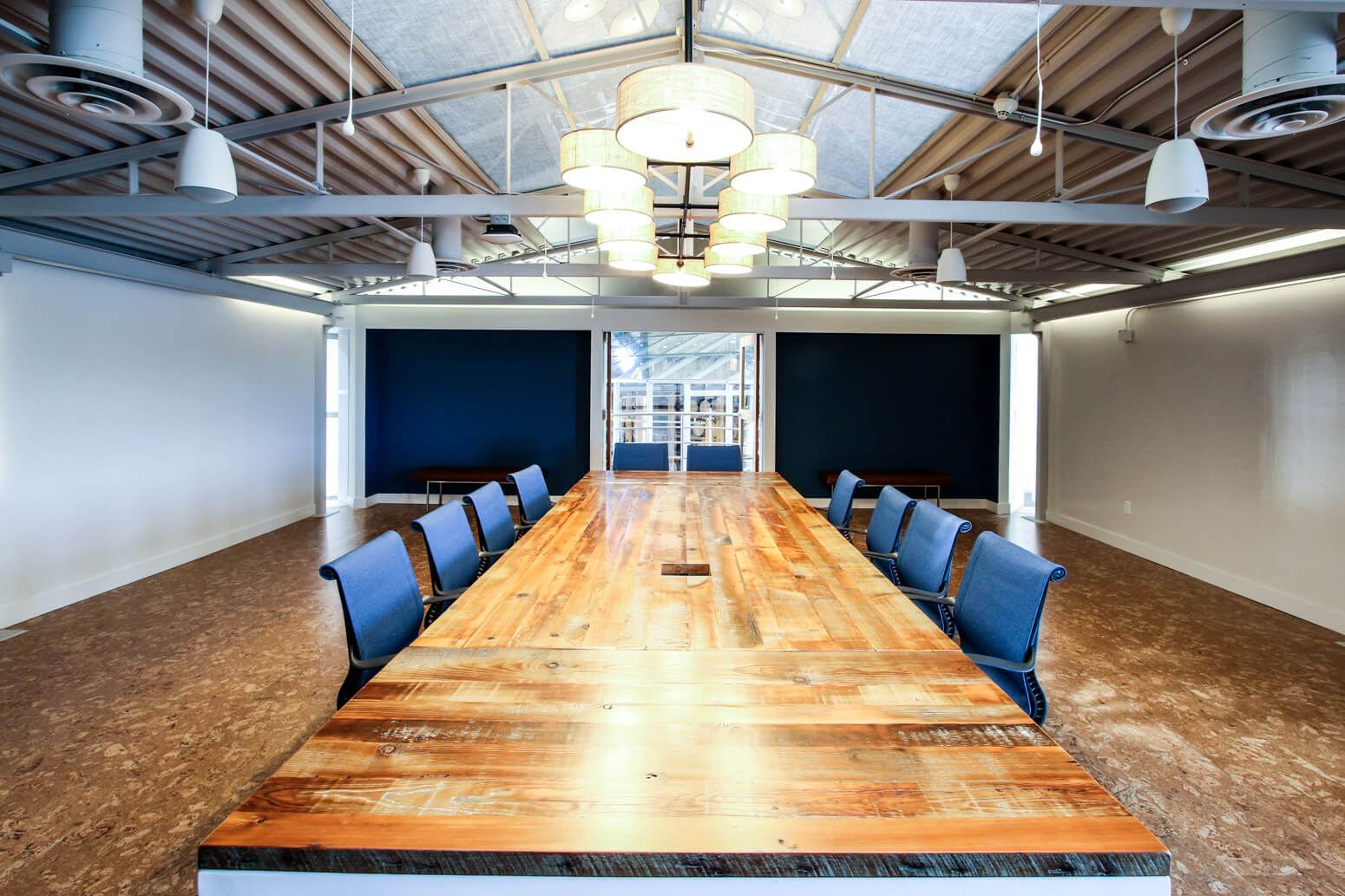 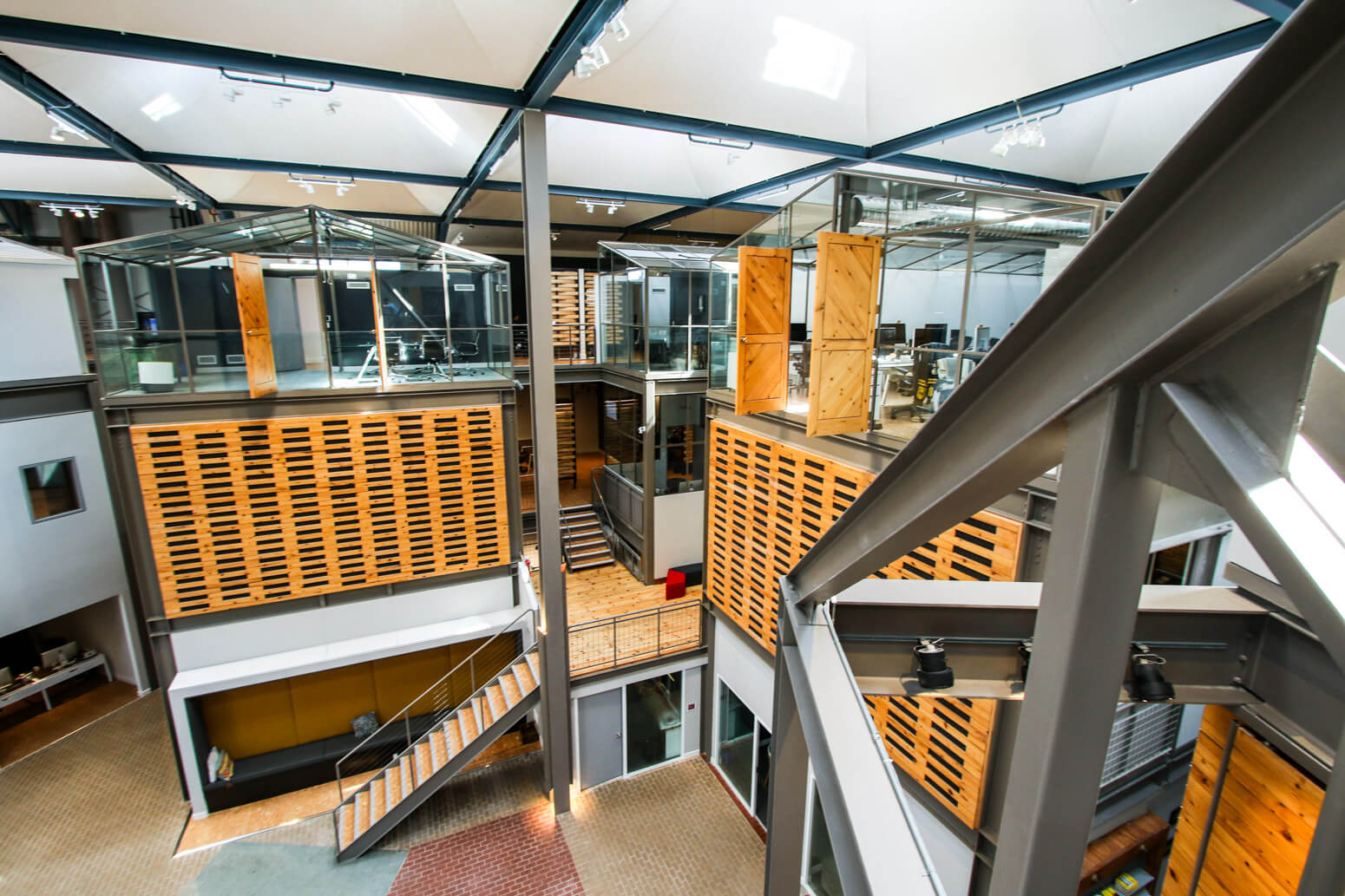 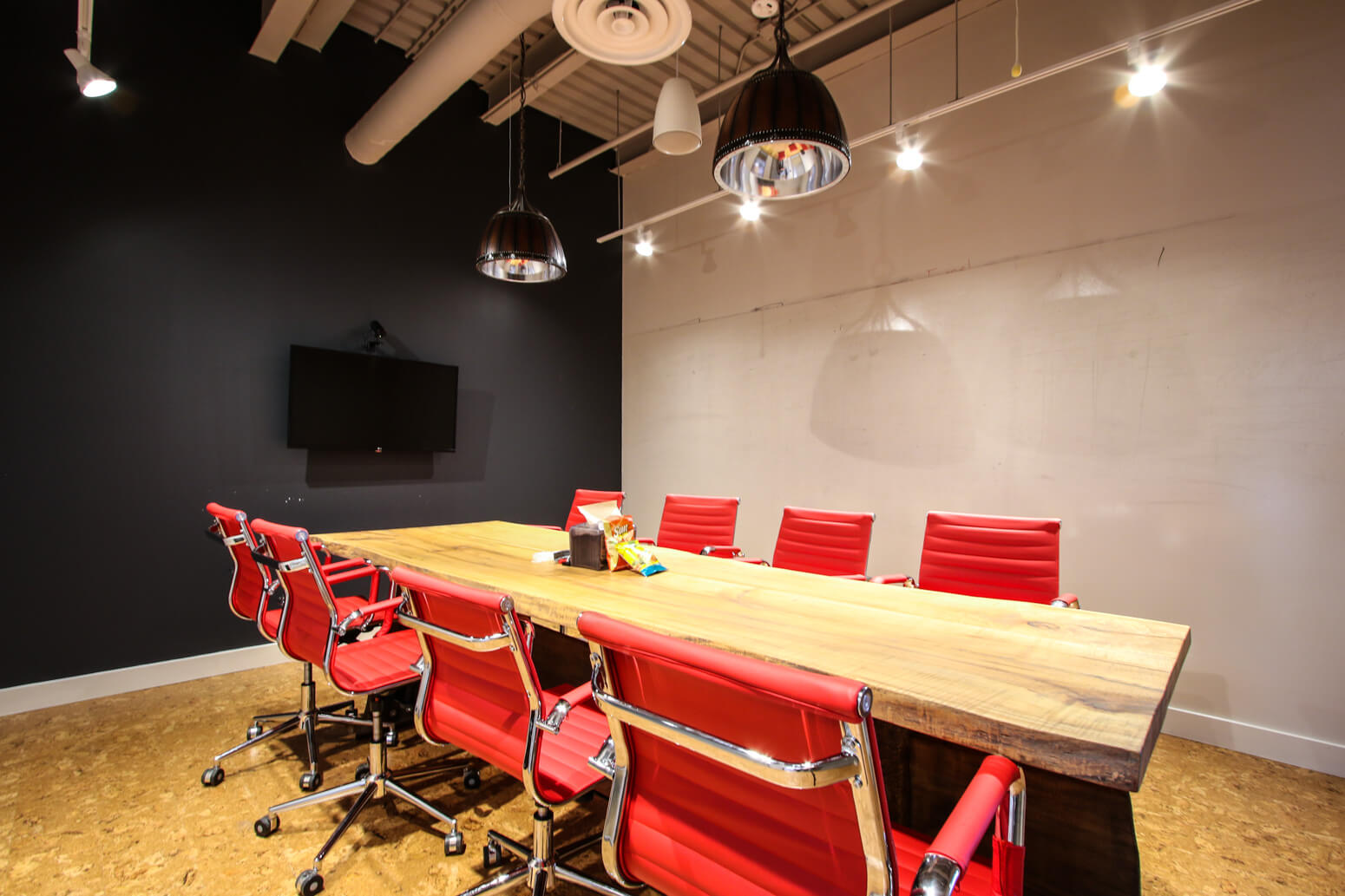 Keeping the team fuelled with food is part of Shopify’s philosophy to give employees time back and encourage a better work-life balance.  To power the Plus team, Shopify Waterloo has five separate kitchens to dish out catered breakfasts and lunches every day. Snacks and thirst-quenching cold drinks are always kept stocked. 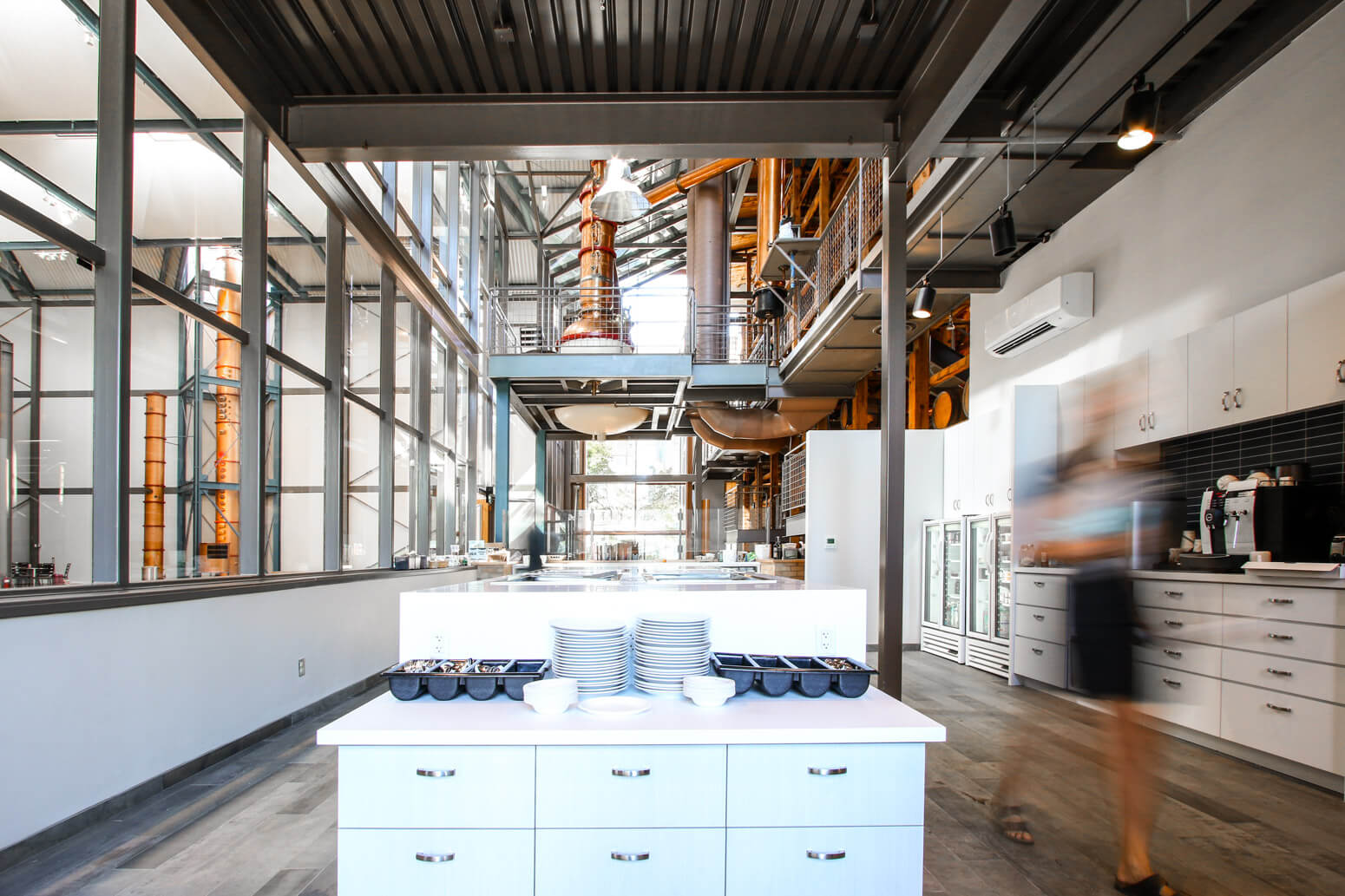 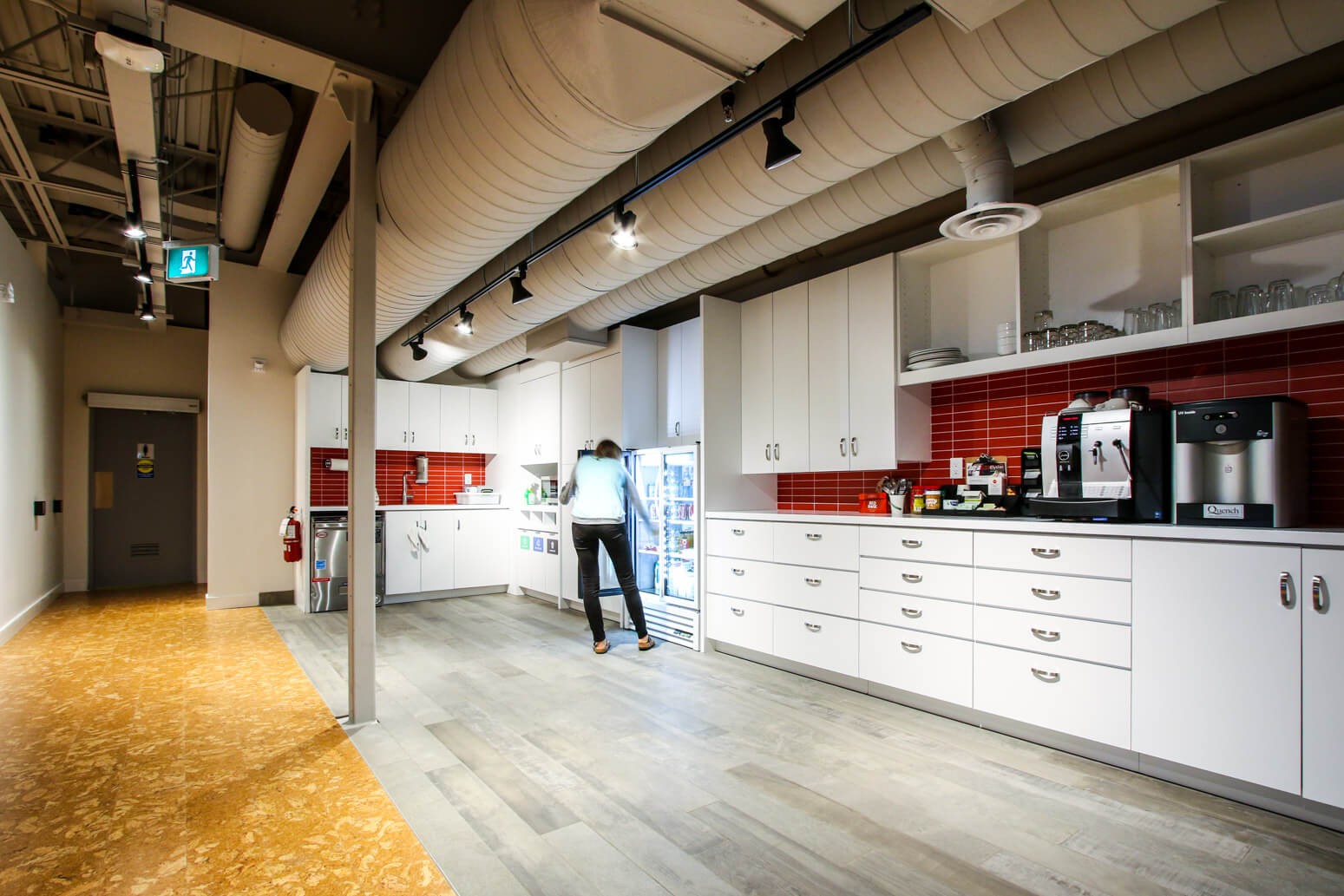 The speakeasy-inspired bar is equipped with special coffee gadgetry to keep the teams percolating. 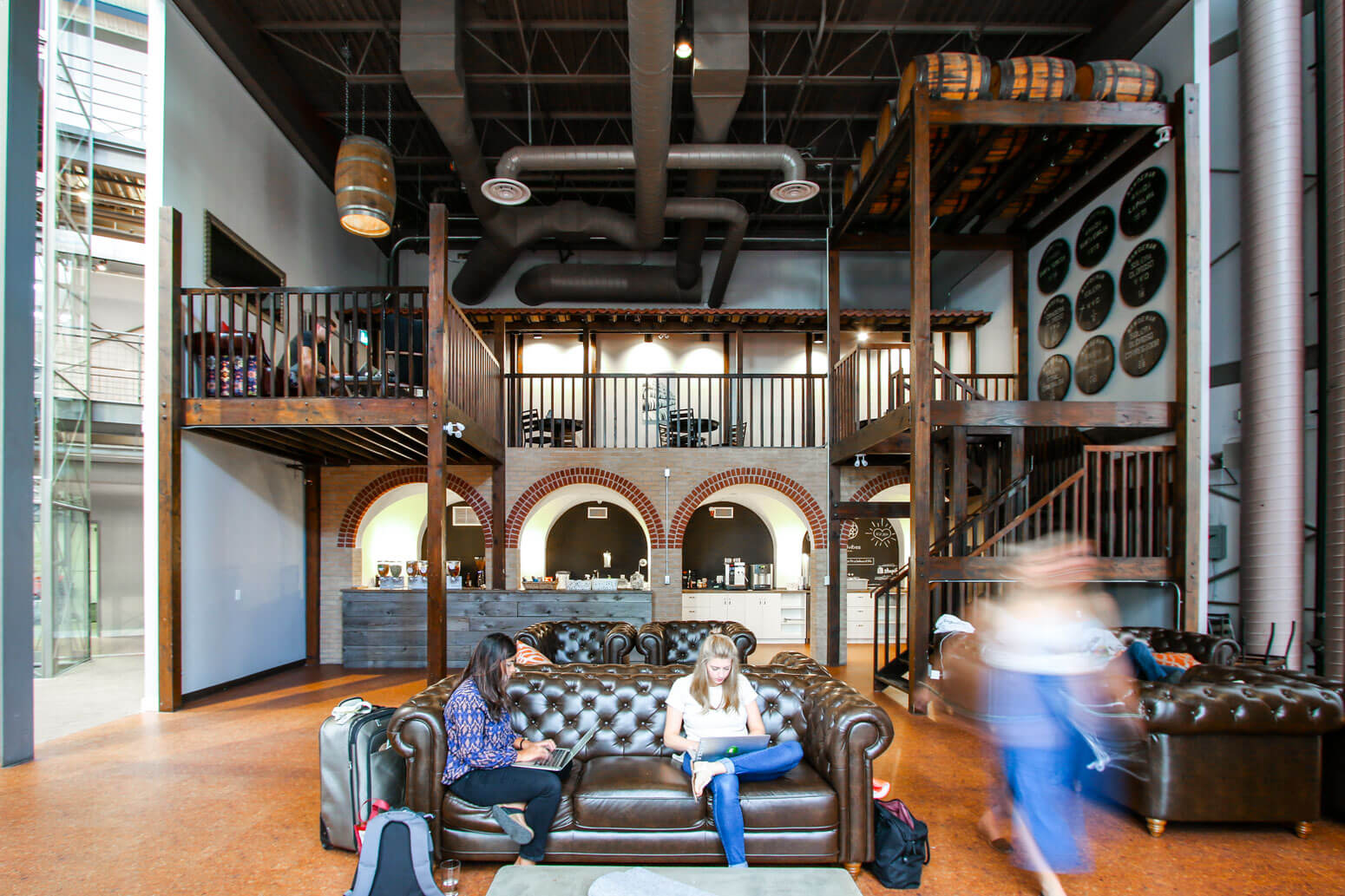 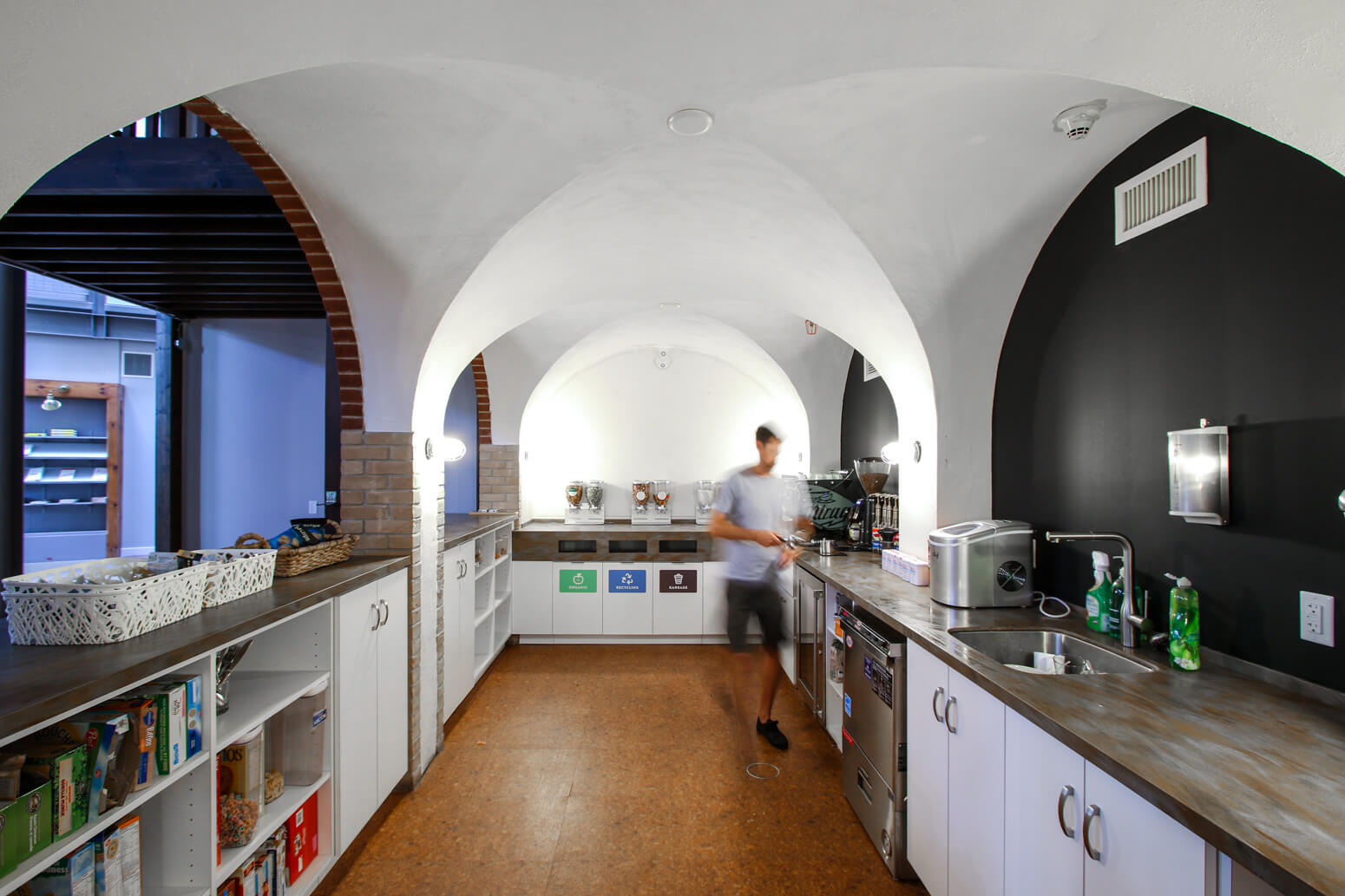 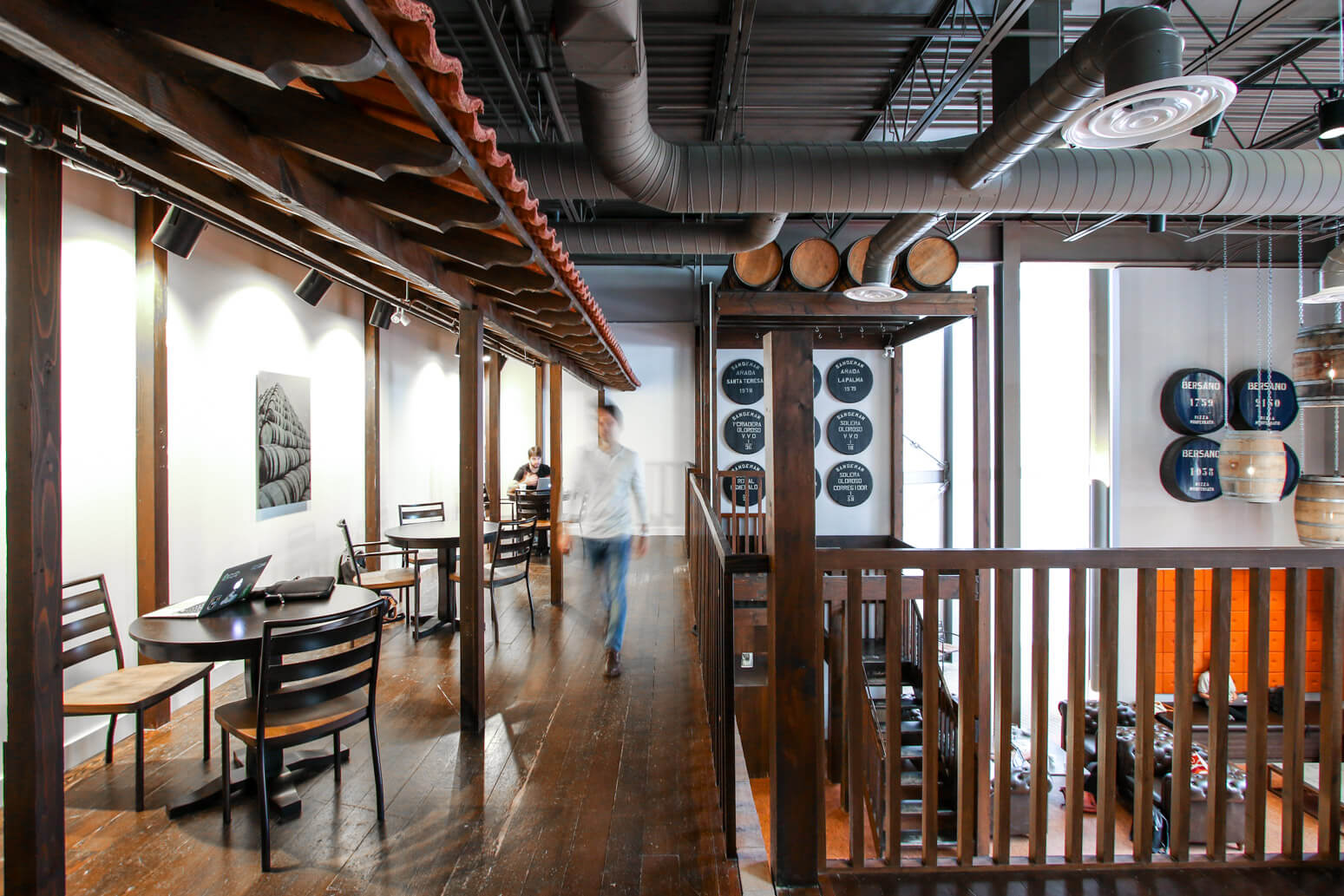 For other vices, the Plus team can pour a pint from their whiskey bar, hidden amongst beams in the barrel room. 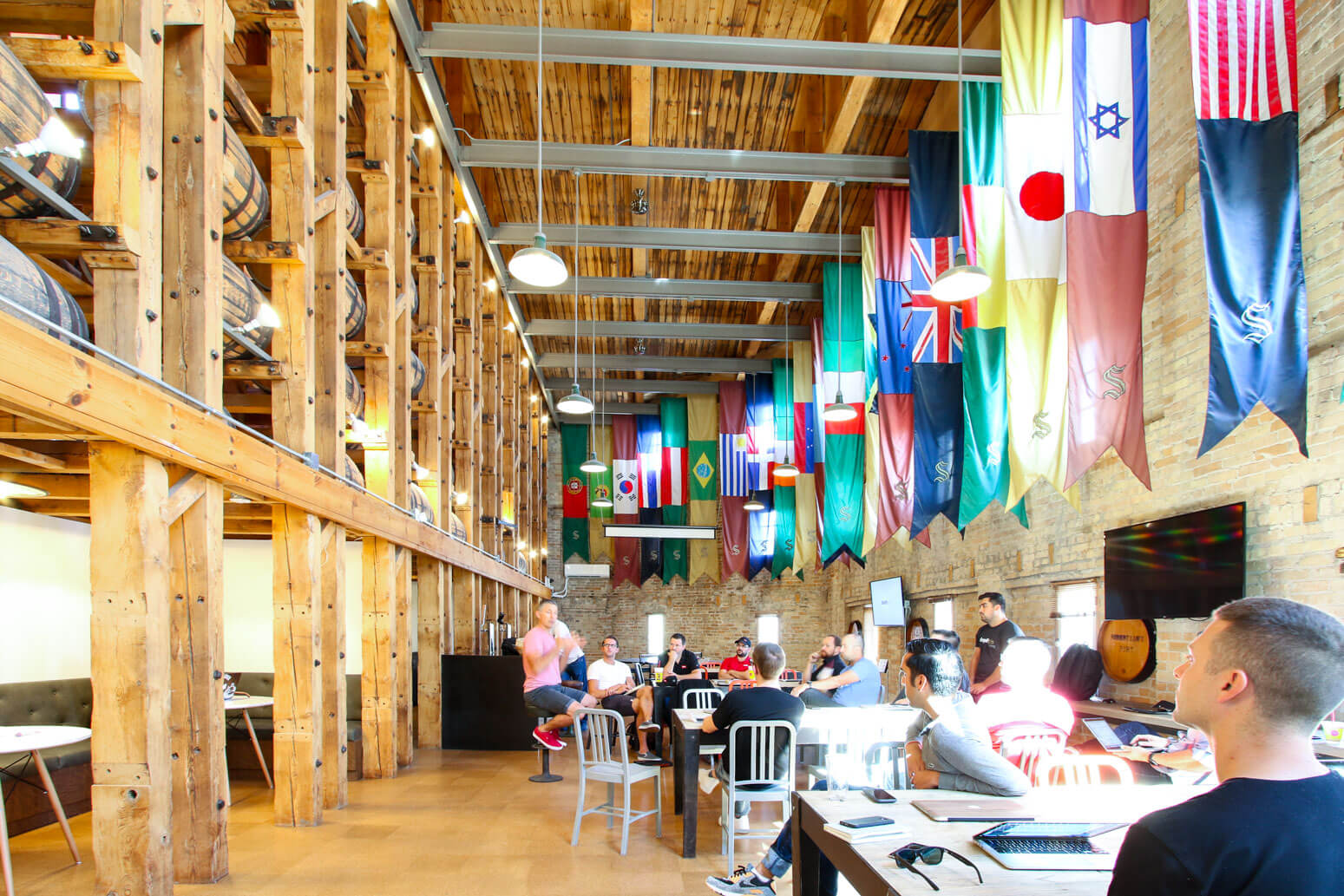 Shopify champions employees to invest in their personal growth and development. The company’s “own your own development” program helps employees develop and hone their skills in areas they think they can improve.

Offering classes, training and coaching along with support for employees to attend conferences are some of the ways Shopify helps their staff grow both professionally and personally. 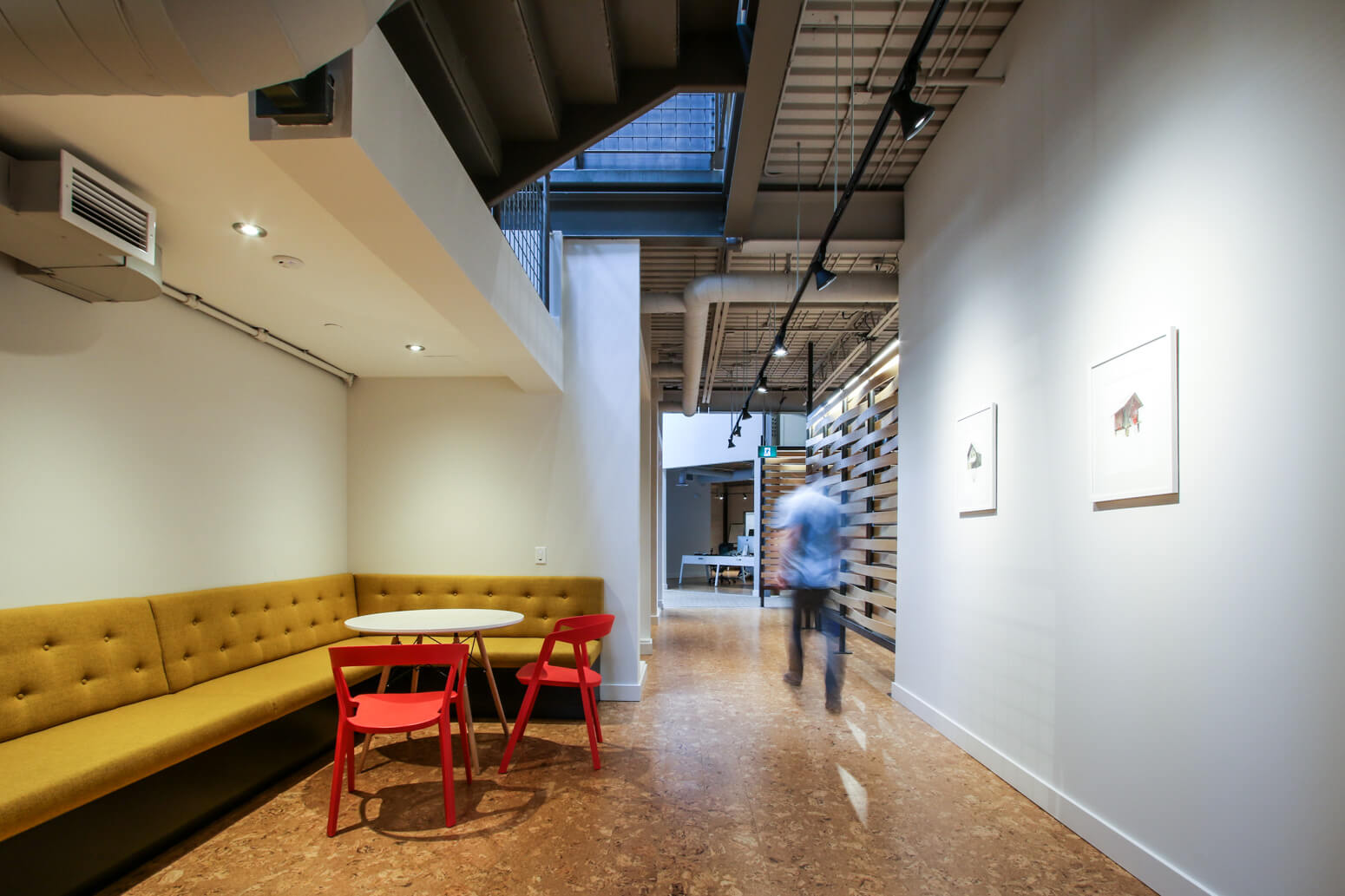 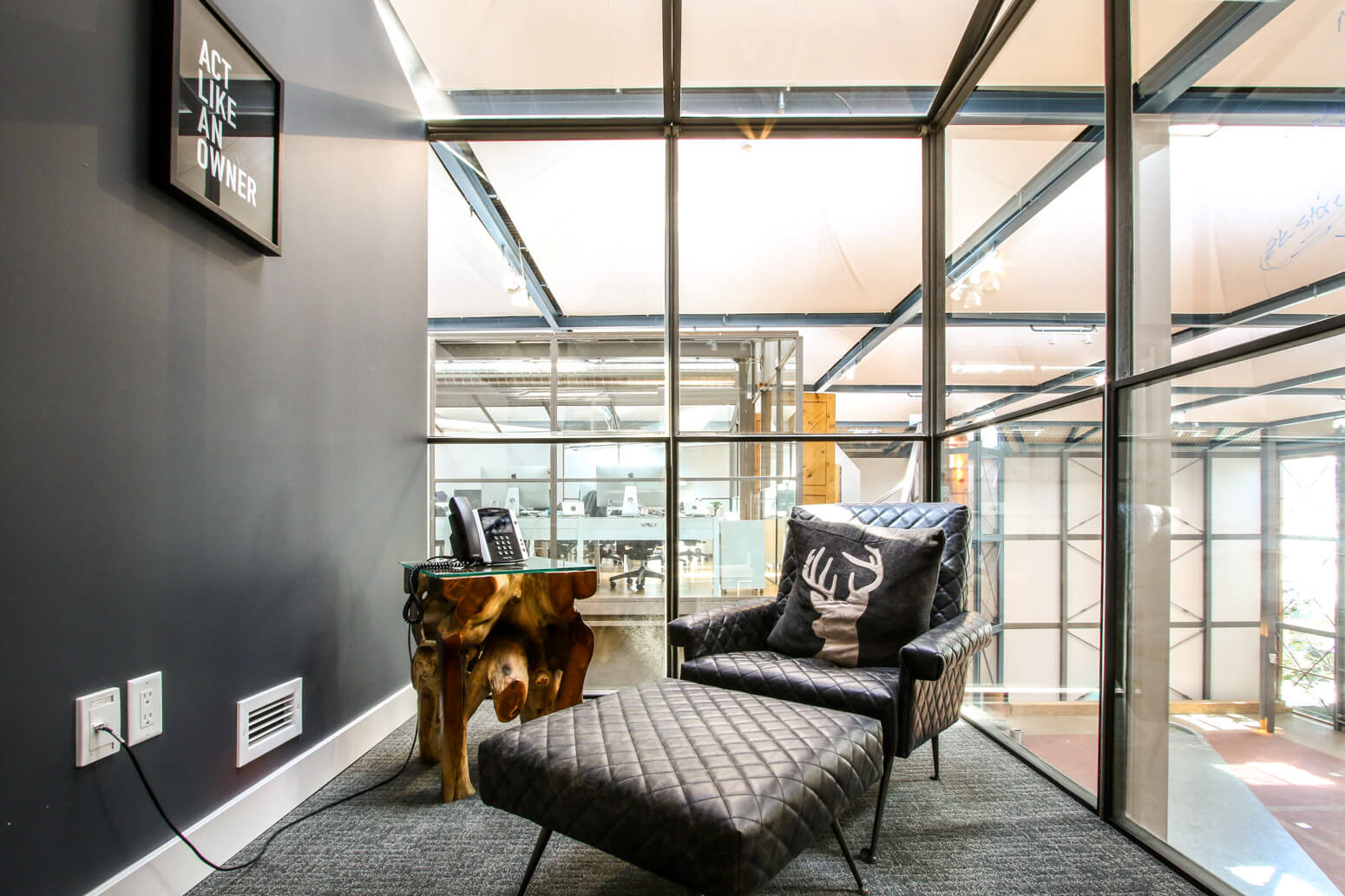 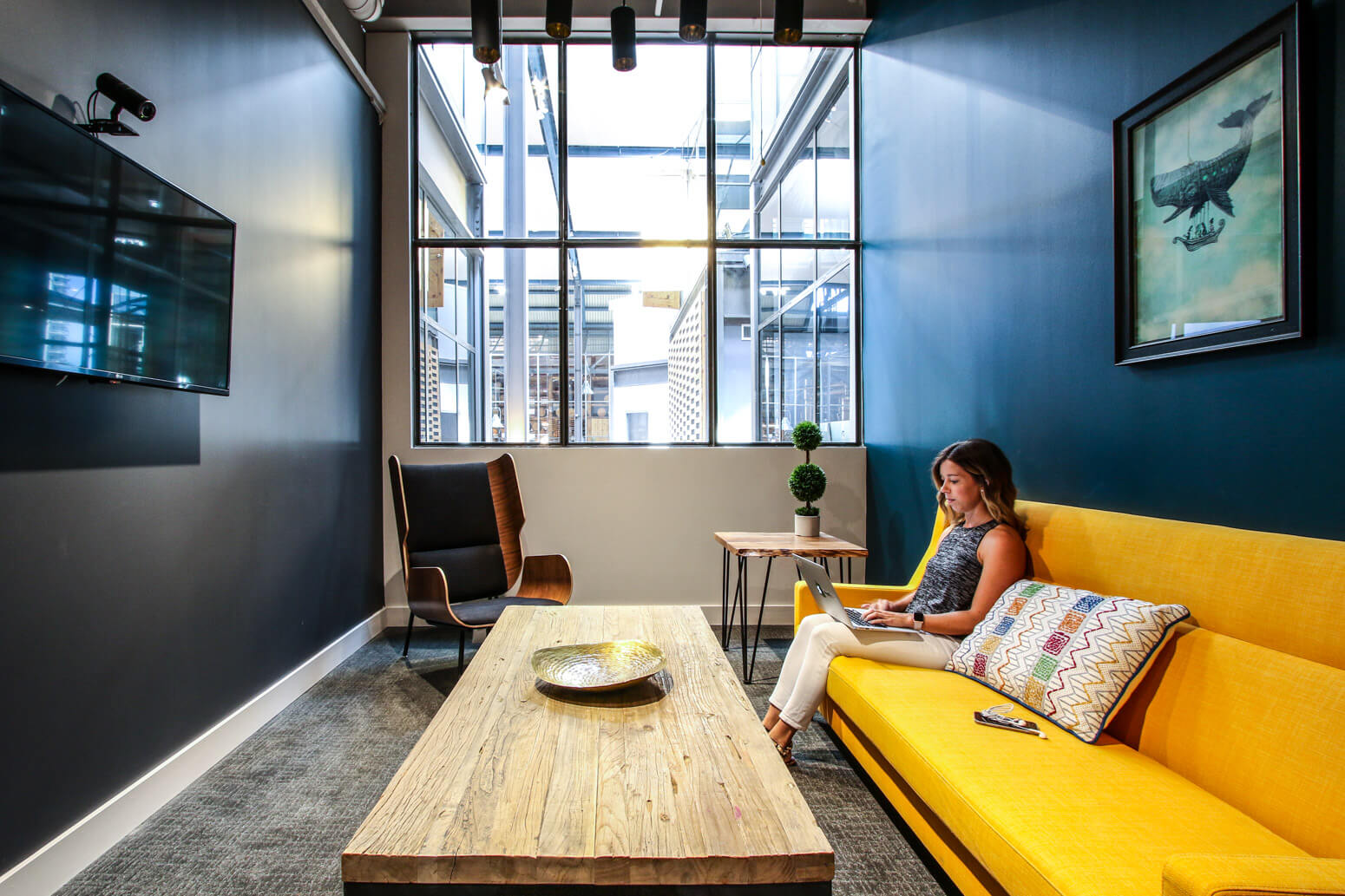 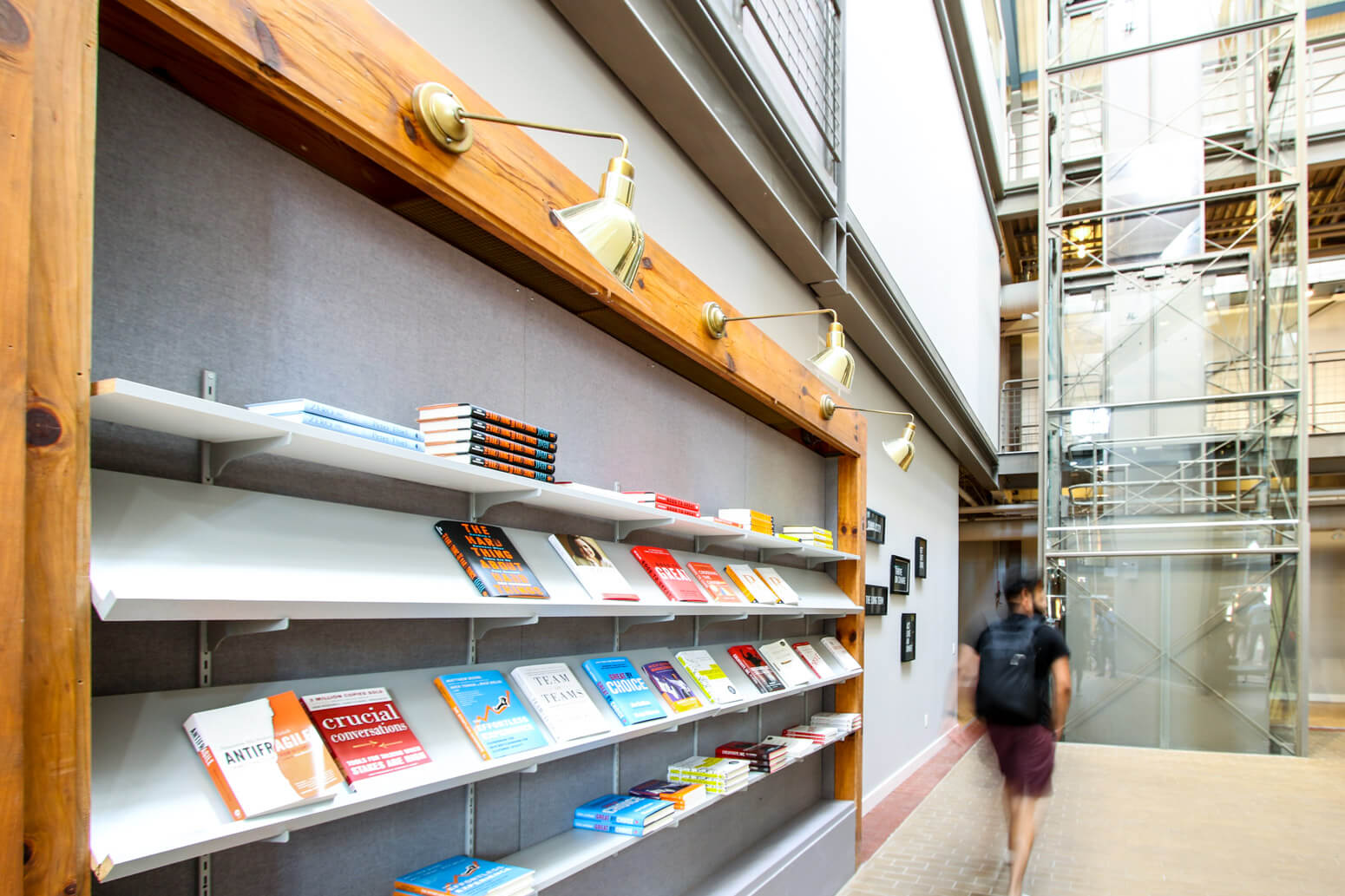 All employees are given a ‘Sportify’ credit that can be used for anything health and wellness related, from a bike purchase to personal training sessions, the flexible credit allows employees to customize their wellness experience for their personal interests and needs.

Shopify also provides an additional subsidized gym membership to all employees, and their spouses.

Break a sweat at work or on your morning ride in? No problem. Shopify’s Waterloo office has showers and bike storage too. 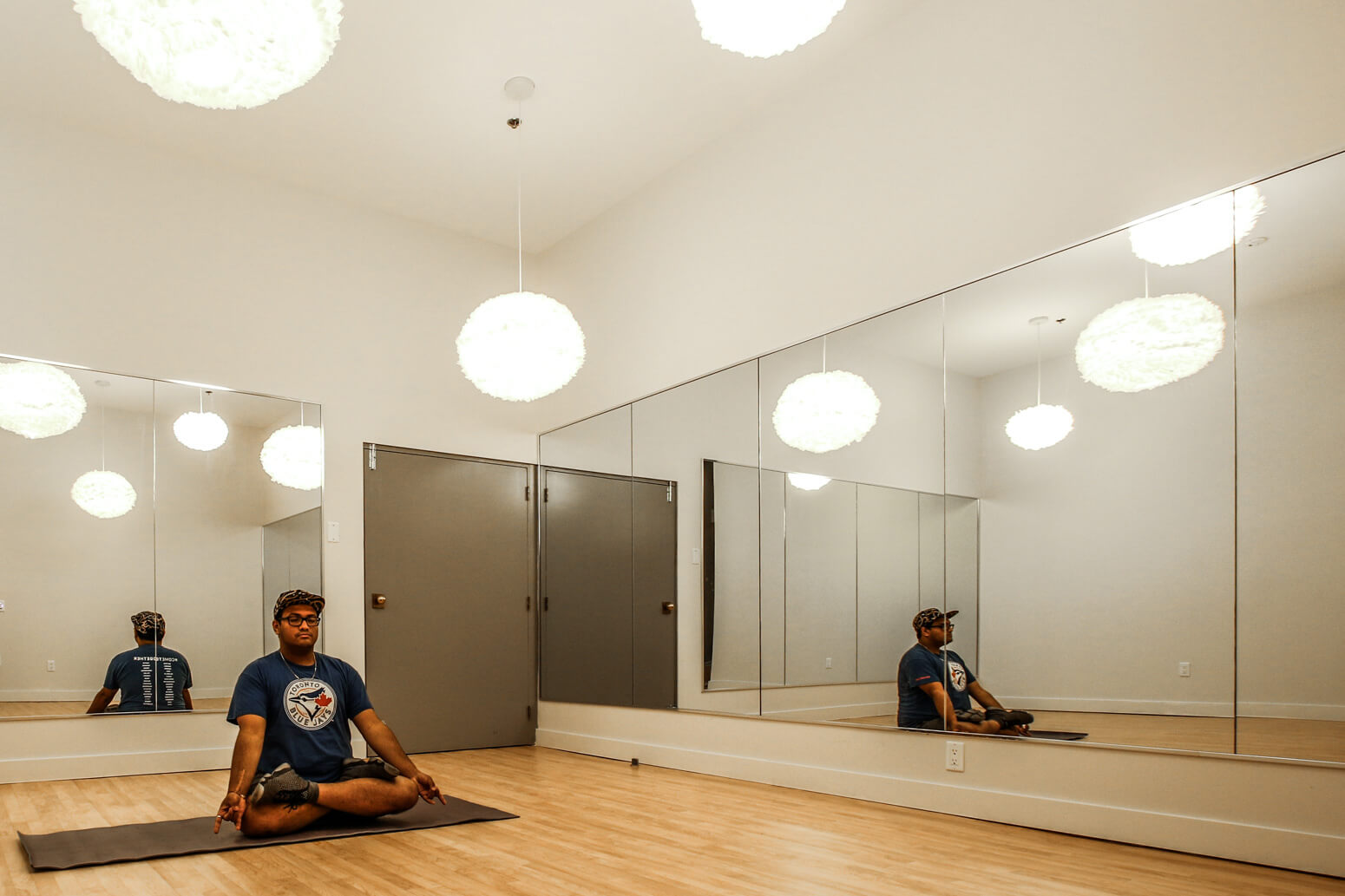