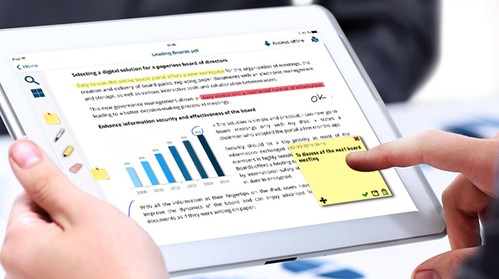 Named top SME for the month of February by the Quebec Technology Association, Leading Boards has been providing a paperless solution for boards and their committees since 2008.

The AQT is comprised of 500 SMEs in the information and communications technology (ICT) industry in Québec. The organization’s “PME on lumière” competition recognizes companies within the province for successful marketing and innovation initiatives.

Leading Boards has doubled its revenues every year for the past five years, and the application is used by over 6,000 directors worldwide.

The software-as-a-service solutions allows committee members to manage all aspects of board governance, including minutes, archives and financial statements through a web and mobile app.

It saves boards up to 70 per cent on management costs and makes it easy to quickly locate pertinent information through a mobile device or a desktop computer.

Eighty per cent of customers access their board information via the mobile app, since many are independent directors who aren’t linked to a physical office.

While 81 per cent of boards have most or all of their documents in electronic format, president of Leading Boards Jean-Marc Félio says it’s only a matter of time before the minority also go paperless.

“Big corporations need something very secure and they’re moving away from paper.”

Unlike competitors, Leading Boards hosts data in the country where its customers are located. This major security advantage has allowed the company to rapidly permeate several markets.

In 2014, the company landed in France, managing to reach the equivalent of one third of its Canadian revenues in just six months.

Félio says the company also has a stronghold in Québec, and they serve as the board portal for the health system in Nova Scotia. A partnership with the Canadian Manufacturers & Exporters Association has allowed them to branch out to Toronto and Mississauga.

Félio says that they’ve taken their first steps in Ottawa, with plans to build out operations extensively. He adds that Leading Boards has already received several requests from federal government agencies.

In terms of the European market, Félio says they’re knocking on doors in Belgium, with plans to explore other countries surrounding France in the near future.

Félio is thrilled to be in the running for the AQT’s SME of the year, and sees the recognition as a bonus validation.

“To be recognized by fellow members and among other tech companies is very flattering.”