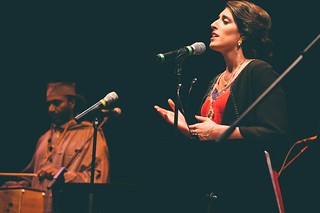 As a young undergrad in Toronto, Lishai was on her way to working in international development. She had lived in different countries, so working overseas was a natural choice.

Then she met a spoken word poet while in St. Kitts on an internship and it changed her life.

“It was the first time I had ever seen spoken word before and I fell in love,” Lishai said. “I had written poetry for a long time, but the words were always on the page, they never left. With spoken word, there was an opportunity for the words to fly off.”

“That’s where the magic is for me,” she said. “When I experienced that, I knew that was something I wanted to do.”

Lishai came back to Toronto and jumped into the spoken word scene. Her experience in the Caribbean was an introduction to a new art form – and to the possibility of art as a profession. Before then, she didn’t know poetry could actually be a career.

“If you tell people that you are a poet, they already have assumptions that you are crazy or broke or working at a coffee shop and secretly writing poetry at home that no one sees,” Lishai said. “Then when I saw people working as poets in a viable way, that’s economically sustainable, it opened up my eyes about what the arts can do.”

Lishai started performing more and more until she was soon a full-time artist. She learned that to make it as an artist, she had to juggle multiple projects, diversify her craft and get involved in the community. She developed skills as a facilitator and educator, and incorporated what she learned in school about economic and community development.

“A lot of time I work with underserved communities, with folks who have come from challenging situations and they use spoken word as vehicle to speak out about what their community needs and wants,” she said. “Becoming a full time poet is very much rooted in becoming a community arts practitioner. It’s about the practice of creating what community could look like.”

Her work has taken her outside the city, mainly to Vancouver, where her brother left a job as a programmer in Toronto to work as a computer analyst at MEC and pursue his dream of becoming a fully certified mountaineer. She says Vancouver feels like even more than a second home.

“I feel like I’m having an affair with Vancouver every time I’m there,” Lishai said. “Every time I come to the city, it’s something special.” “There are interesting things happening in the spoken word scene too,” she said.

“It always feels like there is something bubbling over in Vancouver,” she said. “There is always something cutting edge and new….an exciting meeting place for technology, the arts and nature.

The video that she did for Vancouver Economic Commission (VEC) and others to attract talent reflects these personal feelings about the city. That’s what makes the video, and her other work, so powerful.

“The first thing I tell people is that you have to speak from your own experience,” Lishai said. “There’s no point in writing stories that are not rooted in your own truth, your own reality cause they are not going to be authentic when you walk on stage.”

The idea for the video stemmed from the concept of creative destruction – the notion that everything that ends is the beginning of something new. In a City as alive as Vancouver is with new ideas and possibility, Vancouver is constantly discovering and rediscovering itself.

The video is also being used as a creative platform to promote a contest the VEC is running. The winner of the contest will get a free customized trip to Vancouver for TechVibes Techfest in Vancouver, May 14th. For your chance to win, enter the contest on the VEC’s Facebook page here.

Check out the full video: