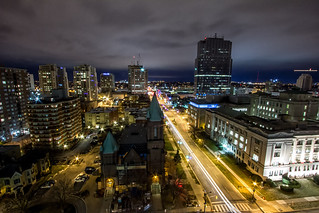 London, Ontario has a longstanding history of entrepreneurial successes.

Business leaders Hank Vander Laan of Trojan Technologies, Mitch Baran of Trudell Medical, and David Seed, Paul Seed, and Ken Kalopsis of StarTech—to name but a few—have paved the way for the next generation of London’s business builders.

Two weeks ago Techvibes took its popular Techfest recruiting event on the road to southwestern Ontario. We partnered with the London Economic Development Corporation to host the event at the London Music Hall and their local connections ensured that the event was a huge success.

LEDC’s Brittany Medeiros and Robert Collins took Techvibes on a whirlwind tour of the city and we met with the companies that are continuing to keep London an worthy alternative to the bright lights of big city Toronto.

Campus visits to both Western’s iconic campus and Fanshawe’s Centre for Digital and Performance Arts reminded us that London’s small-town feel and big-city appeal will help them attract and keep top talent. Office tours of Big Viking Games and Inner Geek felt no different than touring Toronto’s Wattpad or Vancouver’s Hootsuite employee-friendly spaces.

And the ideas in London are on-par with anything you would find in neighboring Toronto as well. We had a chance to meet the next wave of entrepreneurs in London: the likes of Ella Spin of Inner Geek and Taylor Ablitt of Diply. Their London startups were recently named to the October edition of our Techvibes 20 list.

Inner Geek incubated Lantern tracks customer behavior in-store and in-app, giving retailers a better understanding of how their customers shop in their stores and has attracted angel funding of its own. GoViral’s Diply.com is quietly becoming Canada’s BuzzFeed and is now one of the top 200 most popular websites worldwide.

While you’re too late to hear them pitch on-stage as part of the Techfest experience, its not too late to check them out on the Techvibes Job Board.