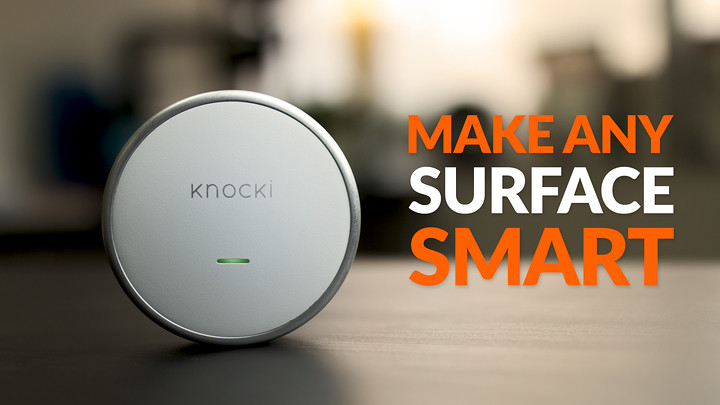 He’s the co-founder and CEO of Knocki, a Huston, Texas-based startup that’s developed a small device that can turn any surface into a programmable remote control.

“Our whole vision with Knocki is that simple is better,” he says. “With a lot of smart home technology, the opposite can happen.”

Knocki is designed to be attached to a surface, like a table, door or wall; once it’s attached, users can tap (or knock) on the surface to control smart devices.

For instance, a tapping three times on a Knocki-equipped table could turn on a smart TV, or a more complicated pattern tapped on a door could open a smart lock.

Boshernitzan says each device can be programmed to recognize up to 10 gestures. Those gestures can be based on a specific pattern, a specific number of taps, or some combination of the two.

“A triple tap on your nightstand before you go to bed can simultaneously turn off the lights, set your alarm, adjust your Nest thermostat to the temperature you want to sleep at, lock your front door,” he says. “Our app can also have the ability to create context beyond just the pattern, for example, you can create a rule where doing a gesture on your nightstand in the morning does one thing and in the evening does something else.”

The Knocki does that by detecting vibrations. Its ability to detect those vibrations is particularly sensitive, Boshernitzan says a gentle tap works just as well as a knock.

But there’s more to it than that.

“It’s not just about being very sensitive, we also have to reliably differentiate random vibrations from intentional gestures,” he says.

To do that the device looks at the intensity of the vibrations and the amount of time between them.

The Knocki team is currently raising money to fund production of the device on Kickstarter. So far, the campaign has raised US$733,000. It needed only $35,000 to get funded.

Boshernitzan says he’s now hoping it will reach US$1 million before the campaign closes on July 2. He describes it as the “best case goal.”
In fact, he says he says he would have been happy if Knocki had raised half that amount.

“We’re amazed and excited,” he says.

Next, the Knocki will start shipping an alpha model to a small group of users. Boshernitzan says he wants to “refine and polish the product” before it reaches the mass market.