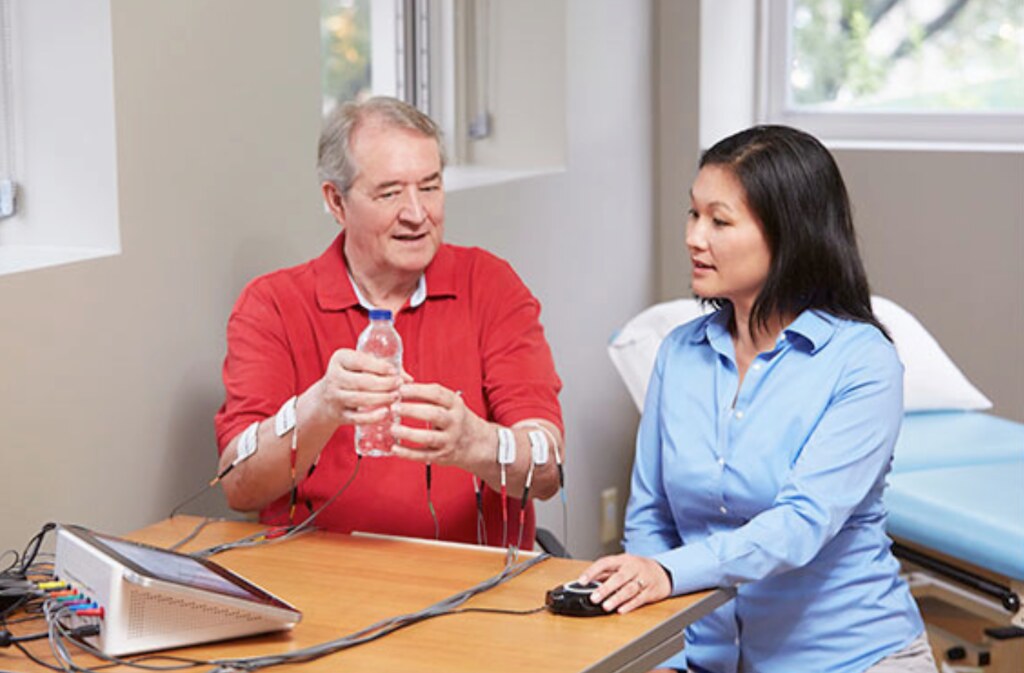 Howard Rocket never expected his left arm to start moving again nearly 20 years after a stroke paralyzed it. But it did, thanks to new technology from Ontario-based medical device company MyndTec, a MaRS EXCITE program participant.

Howard (not pictured) began undergoing MyndTec’s MyndMove therapy last fall with no expectations. Previous attempts at electrical stimulation had worked on his leg, but not on his arm.

“My left hand was clenched and closed most of the time. My arm sort of hung down and I would have pain in my shoulder area,” he says. “There was nothing I could do for it.”

“During the course of the therapy, the patient attempts a movement—holding a pen, for example—and the therapist delivers the electrical stimulation to assist achieving the desired movement,” explains Diana Pliura, CEO of MyndTec. “Initially the patient may require full assistance from the device, but as the therapy progresses patients start to regain voluntary movement and the assistance by the device is phased out.”

Howard figured that it couldn’t hurt to try out the therapy and agreed to undergo 20 sessions. After only three to four sessions of MyndMove therapy, he could relax his hand. After another few sessions, he could start to bend his arm. At the end of 20 sessions, Howard is now able to move his arm up to his chest, which allows him to drink a glass of water. He can also wear fingered gloves now, instead of mittens, and hold on to staircase railings.

MyndMove therapy is commercially available in select Ontario clinics and has regulatory clearance to be offered in clinics across Canada, an endeavour that MyndTec is currently working on. However, the therapy is not yet covered by health plans like the Ontario Health Insurance Plan or considered part of typical rehabilitation programs for individuals who have suffered from stroke or spinal cord injuries.

“Our goal is for MyndMove to become part of standard care and best practices,” says Diana.

That’s why the company is working with MaRS EXCITE, a unique program that works to break down barriers between technology innovators and the health system in order to speed up change. MaRS EXCITE does this by helping companies gather the data and evidence they need to demonstrate the value of their technology to health system decision-makers.

MyndTec already has evidence that its technology works; the company just needs to prove that the technology will save the health system a lot of money.

“Data would drive adoption and reimbursement,” explains Diana. “We have data that the product works. All of the other impacts of the therapy—especially those related to health economics—we can imply, but we really need the data to get large payers on board.”

The loss of arm and hand function severely limits an individual’s ability to perform the critical activities of daily living, such as getting dressed, grooming and eating. The loss of independence that individuals experience after stroke and spinal cord injuries has a big impact on the economy. People with long-term upper extremity disabilities become dependent on other people for help with routine care activities that can become costly. They may need personal support care workers, and friends or family members may have to take time off from work to help them. The consequence is that stroke is the leading cause of adult long-term disability in North America, with the annual burden exceeding $36 billion.

MyndTec’s work with MaRS EXCITE includes a clinical study that assesses MyndMove’s impact on a patient’s ability to regain movement, while also capturing the economic benefits related to potential reductions in personal support care worker hours, decreases in drug usage and general improvements in the patient’s quality of life.

“If an individual has had a stroke or spinal cord injury and they experience persistent weakness in an upper extremity, they are typically taught strategies to compensate for the disability,” explains Diana. “Our goal is to improve function and increase their independence.”

As for Howard? He has continued with additional MyndMove therapy and, most recently, was finally able to give his 15-year-old granddaughter a hug with both arms (instead of just his right arm). He says he’s optimistic that he’ll see further improvement in his arm’s movement.

“But I’m thrilled with what I’ve got so far, so I won’t be disappointed,” he adds. “I’m more thrilled that MyndMove is going to help other people.”

MyndMove’s groundbreaking aspect is that it is available for all levels of recovery, even for the most severely impacted patients who would not qualify for other recovery technologies that are available. This means it can help more people—especially those who would typically be treated to just live with the disability.

Along with being more independent, Howard suggests that MyndMove can help patients avoid depression, among other problems. He also thinks that the prospect of using MyndMove will give others hope for recovery: “Before, there was no hope,” he says.