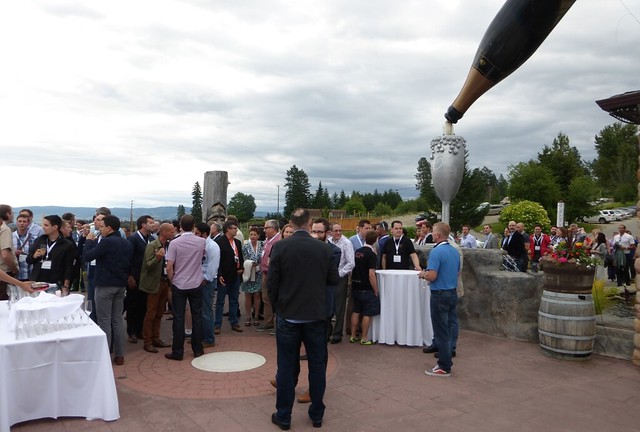 The top Canadian tech startups brought their A-game to Kelowna BC on Thursday and Friday for metabridge, the sixth-annual tech retreat hosted by Accelerate Okanagan.

A pitch competition – featuring Canada’s top 15 tech startups – kicked off the epic two-day event packed with a mix of networking/relationship-building events and leisure activities showing off the Okanagan valley.

The vision for metabridge, founded in 2008 by Steve Wandler after his company YourTechOnline was acquired by Support.com, is to provide an opportunity for “intimate collisions,” a way for startup entrepreneurs across Canada to start meaningful conversations with advisors, mentors and likeminded peers in the Bay Area. Since its inception, metabridge has evolved from a single-day, 30-person event to a sold-out, two-day retreat in Kelowna. Programs and events in Las Vegas and San Francisco have been born out of the metabridge concept.

There’s an abundance of tech conferences out there, but Jeff Keen, CEO of host/organizer of the event, Accelerate Okanagan, explains that metabridge sets itself apart in several ways.

“We take the conference model and turn it on its head,” Keen says. “Many conferences make you sit through a bunch of keynotes, then have a quick wine and cheese, and then you have to wait in line to meet some of the big names. At metabridge we give you two days to enjoy different activities and we provide attendees ample time to meet with and have meaningful conversations and connections with the people and companies that may help them down the road.”

The 2014 version of metabridge, which concluded very late Friday night with a Great Gatsby-themed party, lived up to its reputation as a world class event. The kickoff pitch competition at Kelowna’s Laurel Packinghouse Thursday afternoon was considered by conference regulars to be the best yet.

“The pitches were generally excellent this year,” one former pitch judge told us. “The pitches are more polished than in previous years.”

Following the pitches, attendees were bussed to the Hotel Eldorado for lakeside cocktails and the first chance for startups to rub elbows with potential advisors and investors. Relaxed and possibly a tad less sober, the proceedings shifted to Summerhill Winery, where champagne was served overlooking the vineyards. After a large buffet dinner at the winery, many attendees kept things alive at the afterparty.

On Friday morning, metabridgers were treated to a speaker series that featured three huge names in the world of venture capital: Gil Penchina of AngelList, Rahul Sood of Microsoft Ventures, and Wesley Chan, founder of Google Ventures. These gentlemen had a wealth of wisdom to impart upon the room of entrepreneurs; even those operating on a few hours of sleep appeared wide awake as they ate up the great advice.

Since the weather decided to throw an ugly rain-soaked wrench into Friday afternoon’s planned activities, attendees who were supposed to golf or kayak were bussed to St. Hubertus and Cedar Creek wineries while others boarded a houseboat for a tour of Mission Hill winery. Another group, who checked off mountain biking as their activity of choice, didn’t let a little rain and mud get in the way. Returning wet and muddy, the mountain bikers changed into their dress clothes and joined the wine tourers for a big meal in the dining room of the Eldorado hotel.

The aforementioned Great Gatsby-themed party – the grand finale of the conference – was highlighted by some cool 20s style costumes, a red carpet, lots of fake money to spend on games of chance, and more great networking and relationship building opportunities.

We met a lot of great people and their innovative companies, and we heard some compelling speakers. Although three tech startups were chosen for their quality pitches at the pitch competition, we wanted to have our own very unofficial Techvibes awards for metabridge 2014 based upon our experience.

Best Company Pitch That Wasn’t Chosen by the Judges: BitLit, who we will be featuring in a followup story this week.

Most Fascinating Speaker: Wesley Chan of Google Ventures, who we will also be featuring in a followup story this week)

Coolest Use of a Large Sword: Stuart Bowness, CEO of MediaCore for shaving the top of a champagne bottle after his winning pitch.

Most Friendly Venture Capitalist: While all VCs were very cool and easy to talk to, Alireza Masrour of Plug and Play Ventures stood out for his warmth and welcoming attitude.

Most Troubling Conference Statistic: The ratio of men to women attendees was about 10 to one.

Before the conference started, we asked Jeff Keen (who announced on Friday he is stepping down as CEO of Accelerate Okanagan to pursue another opportunity) what he hoped attendees would take away with them when metabridge ended.

“We want people to come away with knowing they’ve opened the door to new business relationships,” he said. “This is their chance to meet with, have a drink with, and have dinner with some of the tech world’s big names. I hope they’ll have used the time to get to know the people that may be able to help them down the road. It’s all about starting the connection, it’s all about building the relationship. After the conference is over we want delegates to keep the conversation going.”

If you were lucky enough to have attended metabridge, follow Keen’s advice and keep the conversation going. If you missed it, make definitive plans to attend the 2015 event — you will not be disappointed.