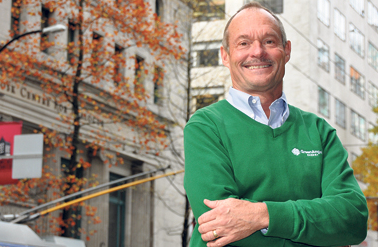 The Startup Grind Fireside Chat has become an institution.

Like any institution, it attracts all kinds of speakers. Some speakers are young and merry and a little insouciant. Others are more dignified. And sometimes, the Fireside Chat attracts someone exactly in the middle. The speaker on Thursday, October 15, was notable local angel investor Mike Volker, current Director of the Simon Fraser University Innovation Office.

The two Cheryls, Draper and Mack, know how to put on an event by now. Everything is just so: from the bright happy lanterns hanging from the ceiling to the abundance of food for the sold out crowd, the event was smooth.

Mike Volker resembled a well-loved uncle. Despite his success, he doesn’t seem concerned with putting on airs. He wears his pants as short as he dares, and his microphone hand features more than one ring.

His words of wisdom were some of the most down to earth to be featured at a Fireside Chat yet. His advice ranged from the practical—to be successful at something, do it many times, and know your trade. Anything can be a technology—innovation defines technology to Volker, not hardware.

“One of the most seminal studies done in Oregon showed that one of the key factors of success was extensive due diligence—a lot of questions at the very beginning, knowing a lot about the people that you’re getting involved with.”

How does he decide whether to invest in you or not? By testing your commitment.

“The most important thing is ‘who am I investing in’? What are your qualities and attributes as an entrepreneur? Are you totally committed to your business? What makes it different from everything else? There’s got to be something that makes me dive to pull out my wallet and write a check…I was talking to an entrepreneur on a Wednesday afternoon, and he couldn’t meet with people because he was sailing. And I asked him what was more important, his business or sailing on an afternoon? I didn’t speak with him again. Commitment is very important.”

If you’re up for funding for the first time, pitch to the investor, not the economy. And brevity remains the soul of wit.

And if you’re invited over to his house for dinner? You’re through the front door—but do be good to Mr. Volker’s wife. When Cheryl asked what his strategies were for choosing who to invest in, he replied:

“I ask them over for dinner, and introduce them to my wife. If my wife, after dinner, says, ‘He’s a jerk’, I don’t go forward with it. Saves me a lot of time. I think women are a bit more…on the human side. They understand more about the soft aspects of human nature, and I often miss that, because I get excited about the technology. But maybe the person with the technology is a real idiot, and I can’t see that! She doesn’t understand the technology, but she understands that. My wife is key.”

The fireside chat itself continued smoothly, exploring his engineering career and the view from the top. When the floor was opened for audience questions, attendees were lucky to hear his views on crowdfunding.

“It’s a favourite topic of mine, because I have the belief that everyone should be able to gamble and speculate on startups. A lot of you probably know this, but you’re not allowed to invest unless you are a credited investors, which is synonymous with angel. The population that can invest is limited to 4%. That bugs me, as someone living in a free enterprise country, I have something against government regulations limiting that. There’s a guy who’s banned from trading here in BC because of a scam he did on investors. He did a Kickstarter, well of course someone spotted his name, that’s the power of the crowd. They said ‘He’s a bad apple!’ Word got out, and he didn’t raise any money. The idea of regulating and controlling will come automatically.”

He still does seem some flaws in the system—but they’re hopefully temporary.

“With crowdfunding, a bunch of portals are opening that are like Kickstarter, but selling shares. The problem I’ve seen with that is liquidity. It’s easy to get in, but how do you get out? Who do you sell your shares to? Think about this. If you sell shares to a thousand investors, a thousand bucks each, think of all the phone calls you’ll get. But portals will be able to help tired investors. Which means we have something we had thirty years ago….a stock exchange, except representing technology instead of mining. There’s not that much different between a mining company and a startup. They’re drilling for a natural resource that’s going to make people wealthy, either gold or an idea. The regulators haven’t grasped that.”

But like all things, it’s a matter of time. November’s Startup Grind Fireside Chat will be on the 18 with Dan Martell of Clarity. There’s always more to learn—especially from experts like Martell and Volker.