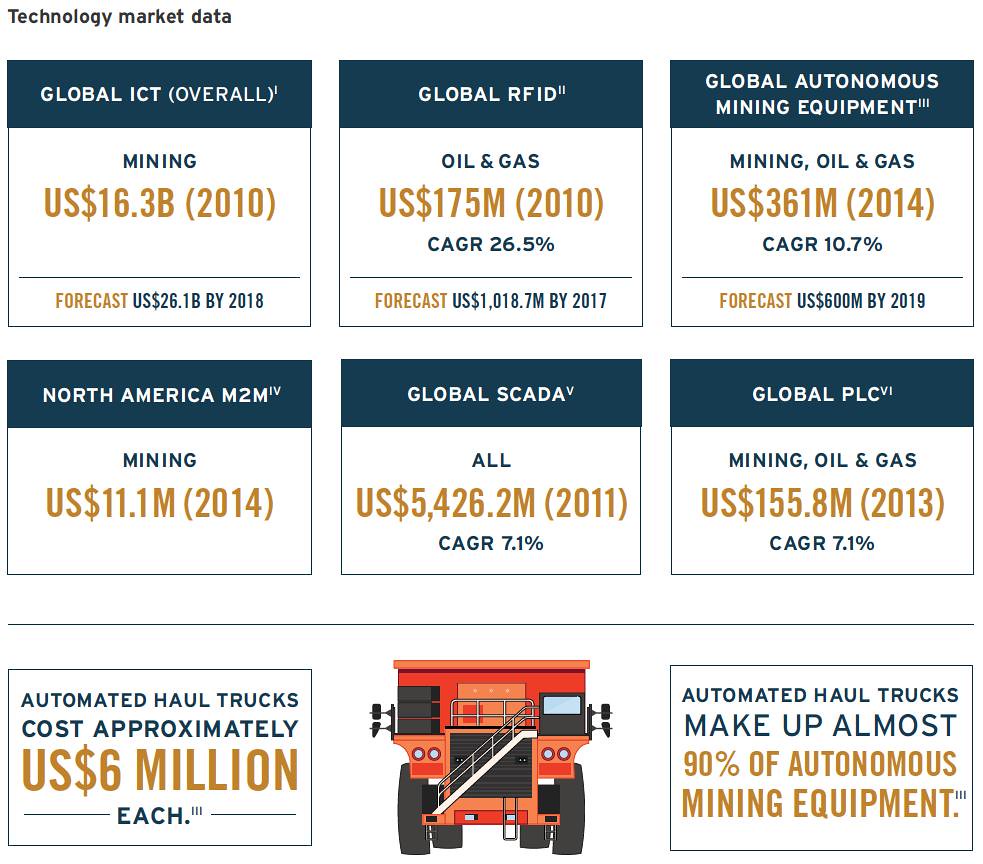 What do big data analytics, the Internet of Things, and automation and control have in common?

All are starting to be commercially harnessed by the mining industry. And while the technologies are developing faster than mines can adopt them in Canada selected deployments show huge potential for miners and the tech industry.

Mining needs this technology, but many companies haven’t yet realized the potential for long term cost reductions in ore targeting and processing, energy management and maintenance – key industry woes.

The technology industry also has to navigate a treacherous marketplace to reap the benefits, but according to the market projections there will be rewards: total spending on information and communication technologies in the mining sector is forecast to reach $26.1 billion by 2018 and more strong market projections are below.

So what does IoT in the mining industry look like? Well few do “toys” quite like the mining industry. There are giant trucks on programmed and responsive routes hauling ore autonomously, drones monitor and measure surface operations and equipment is located, scheduled and monitored with adaptive feedback loops to maximize production. Autonomous drill rigs and trains are already being trialed.

On the miniature end of the scale there are sensors and transmitters for a plethora of variables. Single sensors can measure machinery operating and environmental variables, while integrated networks of sensors can forecast maintenance requirements, prevent accidents, optimize processes and monitor environmental compliance. Thanks to their Internet connectivity it is also possible cover vast distances. The infographic below shows IoT in mining and how it will distill information throughout the mine site operations. 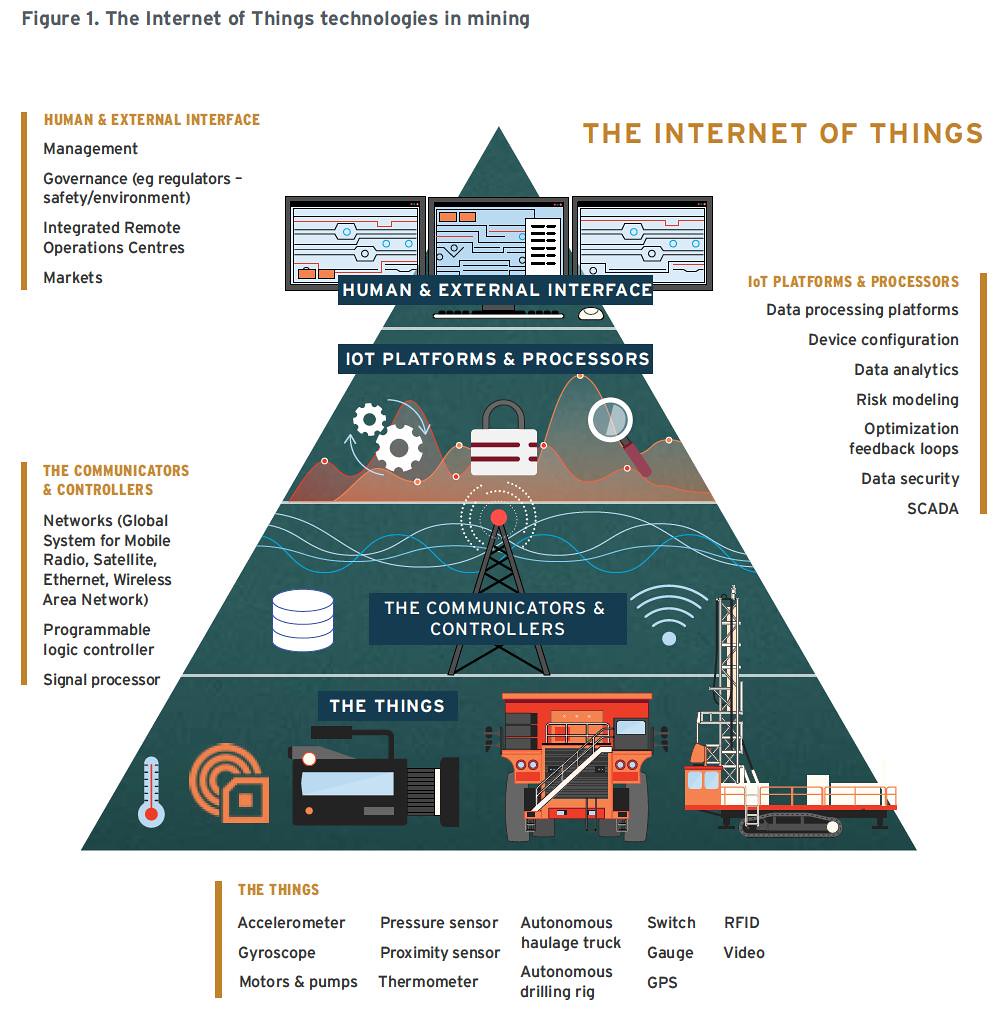 Market data is equally impressive and momentum is building with much of the hardware moving towards open standards to maximize the flexibility and interoperability of equipment. However, services including systems integration as well as tailoring data analysis and outputs is likely to become a significant industry segment.

Capitalizing on these opportunities, Canadian startups have been forging new tracks through these complex and resistant industries.  In the MaRS Market Insights report on these new mining technologies, seven technology companies profiled had strong planning and customer focus with some even referring to themselves as consulting firms with new technology solutions. This trend has also been reflected in Australia and New Zealand with a recent report calculating the total revenue in the automation services market segment at $166.0 million in 2012, a figure likely to reach $279.2 million by 2018.

According to Heather Ednie, Managing Director at the Global Mining Standards and Guidelines Group (GMSG), there are a small handful of very large mining companies that have been, in recent years anyway, very progressive in adapting technology.  The mining industry will be looking to these early adopters for cues.

1. Dundee Precious Metals, a Canadian-based international mining company, implemented their technology solutions in an underground mine in Bulgaria, including 45 kilometers of fibre optics to enable communications and real-time data flow via Wi-Fi.

In two years of IoT deployment, Dundee has saved $2.5 million in operating costs due to improvements in business intelligence and telecommunications.  Their productivity also increased from 500,000 to 2 million tons per year.  They are currently looking into a more “self-aware networ”’ with improved programmability of equipment.

2. The Totten Mine in the Sudbury Basin, Ontario, Vale (a Brazilian miner with operations in Canada) has acquired a wireless network enabling people and equipment to be locatable underground using mobile phones. Vale has also implemented a centrally-controlled ventilation system that can adjust itself according to local operations.

3. Rio Tinto, a British-Australian metals and energy miner, is currently using an automated train, more than 50 automated trucks, a variety of automated drilling rigs from multiple manufacturers and drones. With a mix of environmental sensors, GPS, radar, laser guidance and visuals all feeding back to sophisticated data analytics and interfaces in a Remote Operations Center (‘remote’ refers to their office location in the city). Rio Tinto are expanding their deployment and aiming for massive improvements in surface production efficiency, tunneling efficiency as well as improved resource recovery and a reduction in waste ore.

Canadian innovations in IoT platforms and specialized data processing systems have also been developed and deployed for mining scheduling, process optimization and energy management. These systems can offer energy cost reductions of up to 40%.

The mining industry at large is starting to understand. In an industry survey, released in October 2014, Hall & Partners found that around 47% of mining executives in the Australian market felt that firms were not currently investing enough in implementing new technologies.

As the data on productivity, safety and cost reduction increases the case for more widespread implementation of these technologies will grow.  At that point those, who have so far only been able to peer through the toy store glass, will help usher in new technology and push mining to the next level.

Check out the report released by the Market Intelligence Team at MaRS on the opportunities for new technology uptake in mining. It highlights innovative companies and the thoughts of industry leaders.