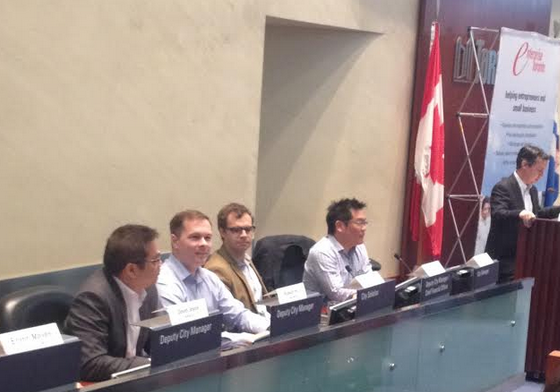 “Fortune Favours the Bold” was a recurring message at Enterprise Toronto’s third annual Money Forum earlier this week, which drew a diverse crowd of entrepreneurs and startup founders to City Hall to explore aspects of financing new ventures.

Forum panelists repeatedly cited having a high risk tolerance and confidence in one’s vision as prerequisites for succeeding as an entrepreneur. Equally important was knowing when to reach out for support and advice. Non-profits Futurpreneur Canada and the National Crowdfunding Association of Canada were on hand to both embolden new business leaders and to provide that much-needed advice.

Craig Asano, Executive Director of the National Crowdfunding Association of Canada (NCFA), outlined a dizzying array of opportunities available to startups through the fast-changing world of crowdfunding. The better-known crowdfunding platforms like Kickstarter focus on fundraising through donations and rewards, while he explained debt-based crowdfunding and equity crowdfunding lie on the more complex end of the spectrum, often involving securities law and jurisdictional issues.

“Crowdfunding has been a tremendous source of capital for not just for innovative companies, but for non-profits, individual projects, even public companies are interested,” he said of an online funding medium that is growing exponentially each year. Raises through global crowdfunding grew from $1.5 billion in 2012 to $16.2 billion in 2014, with a further increase to $34.4 billion forecast for 2015.

With half of NCFA’s 1,100 members comprised of small businesses, Asano says crowdfunding offers startups several major advantages over traditional approaches. The most obvious crowdfunding benefits are the ability to quickly raise capital and the enhanced marketing profile generated via the fundraising campaign. But almost as important is how crowdfunding allows startups to pursue fast and relatively affordable market validation for their products.

“It’s a fail fast culture…that’s what crowdfunding is enabling,” he said. “The idea is you can go out and fail a bunch of times and strengthen your company, find different partners.”

Another key advantage to crowdfunding is its ability to easily reach beyond national borders through web-based platforms. Crowdfunding also offers much better opportunities for women entrepreneurs than traditional venture capital, which directed as little as 4% toward women-run startups versus 96% for male-fronted companies according to recent research.

Meanwhile, Scott Bowman, Futurpreneur’s Senior Director for Ontario, explained the opportunities available to entrepreneurs between 18 and 39 years old through his organization, formerly known as the Canadian Youth Business Foundation. Though many youngish entrepreneurs turn to Futurpreneur for much-needed financial backing, he says it is the two-year expert mentoring program that can have longer-lasting impact on budding business owners.

“People may come to us for money, but what helps them be as successful as possible is the information, the coaching and the support from our mentors,” he said. “It’s important to have that kick in the pants sometimes, or that sounding board, the guy who says ‘look here are some options or some things to look out for’.”

On the financing side, Futurpreneur supports entrepreneurs with up to $15,000 directly, or funding totaling $45,000 via a partnership with the Business Development Bank of Canada. Specifically for tech startups, Futurpreneur offers up to $50,000 from the Spin Master Innovation Fund which supports 10 entrepreneurs a year. Some successful Toronto startups that previously received Spin Master funding include: MENTORnetwork, Think Dirty, SuiteCity.ca, GrandezVous and CHAR Technologies.

“Our real sweet spot is someone from their mid-20s to their mid-30s,” said Bowman. “We look for someone who has an amazing business idea and a lot of passion.”

Futurpreneur helped launch 995 companies across Canada over the past year, with 311 launched in Ontario alone. Those impressive numbers prove there is no lack of entrepreneurs brimming with ideas, passion and the boldness to take a big risk for that sweet reward of startup success.