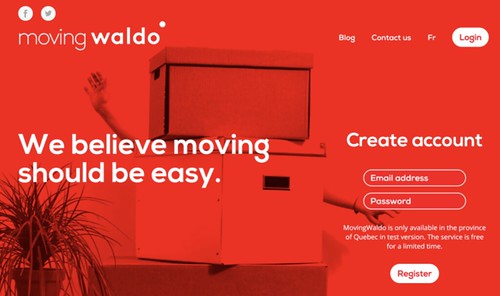 One of the trickiest parts of moving might not be the packing or figuring out how to get a sofa through a doorway.

It just might be remembering to change your address with your bank, hydro company, telecom providers and subscription services – one at a time.

Guillaume Lahoud and Philippe Tardif-Michaud want to change that. They’re the co-founders of MovingWaldo, a Montreal-based startup that wants to make changing your address a one-step process.

“We’ve moved a lot,” says Lahoud. “We came across that problem that when you move … you get caught in all that administrative paperwork at a moment when you have so many other things to do.”

Lahoud says he expected there to be an easier way but when he looked online he couldn’t find anything.

“Aside from the Canada Post redirection service, which really doesn’t solve the problem,” he says. “There’s nothing out there.”

He might not be the only one looking for an easier way. According to Tardif-Michaud four million Canadians move each year, 12 per cent of the population.

“Everyone faces the same problem,” he says.

In order to create a one-step address update system, MovingWaldo is working directly with the service providers that its customers do business with, in an effort to directly integrate its platform into their systems and make the process as automated as possible behind the scenes.

While it’s a lot of work, he says it’s going well.

“So far, we’re really proud that there’s a lot of good providers on the platform and we have early adopters and leaders in each industry,” he says.

“It will always be a work in progress because there is always going to be someone that is using a service that we have never heard about,” Tardif-Michaud says.

Currently, MovingWaldo is only available in Quebec, as the pair focus on building relationships with service providers as well as growing their customer base.

It’s fitting, Quebecers are more likely to rent than people in any other province and they move more often. That’s even more true in Montreal, where over 60 per cent of the city’s population rents.

“Montreal is definitely a huge market for this, there’s a big culture of moving in Montreal,” says Lahoud. “Phil and I probably moved every year for five years.”

Moving is so ingrained into Quebec culture there’s even a day for it – July 1, when most leases expire, is known as Moving Day. It’s a “holiday” that sometimes seems better celebrated than a certain other holiday that falls on the same date.

Lahoud says MovingWaldo plan to expand to Ontario by 2018, with the rest of Canada coming shortly after that. Right now, the service, which launched in mid-January is free but the pair plan to start charging users directly.