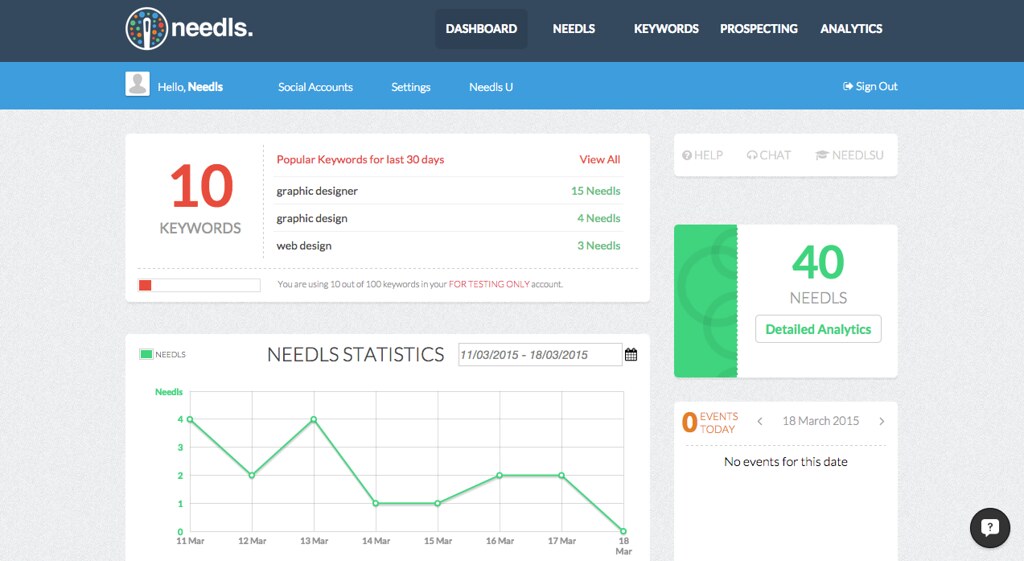 Within the past 10 years, Justin Hartzman has already had two successful businesses when he started brainstorming his next venture.

He cofounded two sites with his friend Jeremy Poriah – WeSellYourSite.com, a company that helps people get their websites sold, and All You Can Eat Internet, a web design and consulting firm. His friend Michael Koral joined later and the three entrepreneurs noticed a common issue with these businesses: Actually looking for your next client.

“We were having a heck of a time trying to use traditional methods,” Hartzman says. “They cost a lot, they didn’t convert well and they weren’t measurable.”

Though the idea at first was to buy a company that provides such services, after years of searching, he couldn’t find anything. Then, one day, Hartzman’s wife told him that one of his Facebook friends made a post saying that he was looking for an iPhone developer. He sent a message to his friend and sent him a portfolio of work, got the sale, and he says a light bulb went off in his head.

“People aren’t going to the bar to ask for things anymore,” Hartzman says. “They’re going online and asking friends, family and the people around them to give them suggestions of where to purchase things.”

And from that, needls. was born. Targeted at small and medium-sized businesses, the program works by asking companies to answer questions about their location, industry and ideal keywords once they sign up. Then, the needls. system scours Facebook and Twitter for possible leads – for example, a massage business could find people tweeting that they need a message – and delivers these tweets and Facebook posts to the companies in real time, through e-mail, for them to respond how they wish. So far, they have 1,000 end users and 400 agencies signed on to their services.

“It’s not a system where you have to learn a new technology and learn how to communicate with a customer,” Hartzman says. “We’re simply filling the pipeline to help them do what they’re good at, which is selling and providing their services.”

After spending the past year developing the service and testing with different industries, Hartzman and his team officially launched in March and are tapping into a huge market that doesn’t have the resources to pursue bigger analytics companies like Sysomos and Brandwatch; 98 per cent of employer businesses in Canada are small businesses. As large companies like Coca-Cola and Nike can afford their services, they also benefit from being a well-known brand that people already know that they can follow.

“The overall big picture is that someone has a brand, and they can follow that brand,” Hartzman says. “Our group doesn’t have that yet.”

Needls. has been largely self-funded so far, but last year, the Government of Canada contributed $85,000 through their Industrial Research Assistance Program, which provides funding and innovation services to help companies accelerate their businesses. They’re currently seeking further seed rounds found venture capitalists, and are even hoping to expand to Instagram.

“We feel that small businesses are the group we’ve spent the last 15 years working with, and we’re all about helping them grow and find clients because when they grow, we grow with them,” Hartzman says.