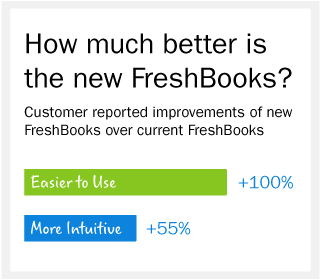 FreshBooks has been working on a secret project for 18 months: a new FreshBooks.

Launching this summer, cofounder Mike McDerment says users will be able to “move freely between both versions, and your data will follow.” He emphasizes that the new FreshBooks is not simply a redesign, but rather “but a whole new product.”

“It behaves differently,” he writes. “It has new features. It’s been redesigned and rebuilt from the ground up so you can get new improvements faster than ever before. It’s all part of our mission to help reshape the world to suit the needs of self-employed professionals and their teams.”

McDerment says base pricing will not change and users who don’t switch over will pay the same. The new platform will include training on how to best use it, he says, in the form of webinars and videos.

“There is still a lot of work to do before the official launch of the new FreshBooks this summer, but we know enough now to be fired up. In the coming months, you will see improvements to our current products and we will progressively share more about the new one,” he writes.