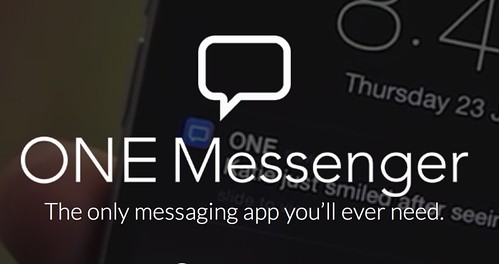 For the last year, Mark Lee and his team of four have been working in secret to change the way we communicate. After meeting at local startup events, Lee and his team realized they shared a love of consumer technology and a passion for the way we interact with the important people in our lives.

One Messenger is the result of these combined passions and a year of bootstrapping: the first messaging app that values your memories just as much as you do.

“We knew this was an idea where we either went all in or shouldn’t attempt at all,” said Lee.

Lee was looking to develop a startup at the time. While on the hunt for others just as passionate about their crafts, he met Daniel Louis, Elliot Gold and Chris Lee at Startup Weekend. He describes their partnership as “different industries coming together.”

Lee believed that his idea could change the digital world, and knew that he needed the right team to make it a reality. Before bringing anyone on board, they were asked the following three questions,

“Can you see what others can’t see? Do you have the courage to make decisions? Are you willing to outwork everybody?” recounted Lee.

They answered yes to all three. “It takes real courage to make ideas a reality,” said Lee.

Lee refers to One Messenger as the first messaging app that conveys the emotion behind a statement. With all your multimedia saved in one place, custom badges and free unlimited texting whether your contacts have downloaded the app or not, One Messenger is equipped to be the only messaging app you’ll ever need.

However, messaging is so commonplace in the digital world that every product claims to be the all-in-one solution. Lee and his team hope One Messenger will be up there with startups like Whatsapp and Snapchat.

According to Tech Crunch’s Sarah Perez, as of 2013 the amount of messages sent from these kind of apps reached 71.5 trillion.

ReadWrite’s Selena Larson stated that several apps seek to differentiate themselves by customizing their emoji sets or improving their multimedia aspects.

Both Perez and Larson agreed that the key to customer retention in such a saturated market is focusing on features not offered by traditionally used apps and expanding on those gaps. Larson concludes by saying that “In the race to become the most popular way to communicate, some startup will inevitably create the messenger we never knew we wanted.”

One Messenger hopes to be exactly that. Techvibes asked Lee how he planned to stay competitive in a market where new and innovative ways to communicate are developed every day.

“Communication is at the core of our lives, but with current messaging apps, the experience was rigid,” says Lee.

An example of One Messenger’s authenticity is Lee’s emphasis on emotional responses being conveyed through the app. Instead of simply sending a happy emoji in response to a message, you have the option to send a sticker that reads “Katie just smiled as she opened your message.”

“One Messenger really is a reflection of your life, but our vision to enrich the way people communicate. We don’t want to limit our vision to messaging”

One Messenger was released in app stores on last week. Though Lee wouldn’t state what the crew was working on at the moment, he insists that more surprises are yet to come.