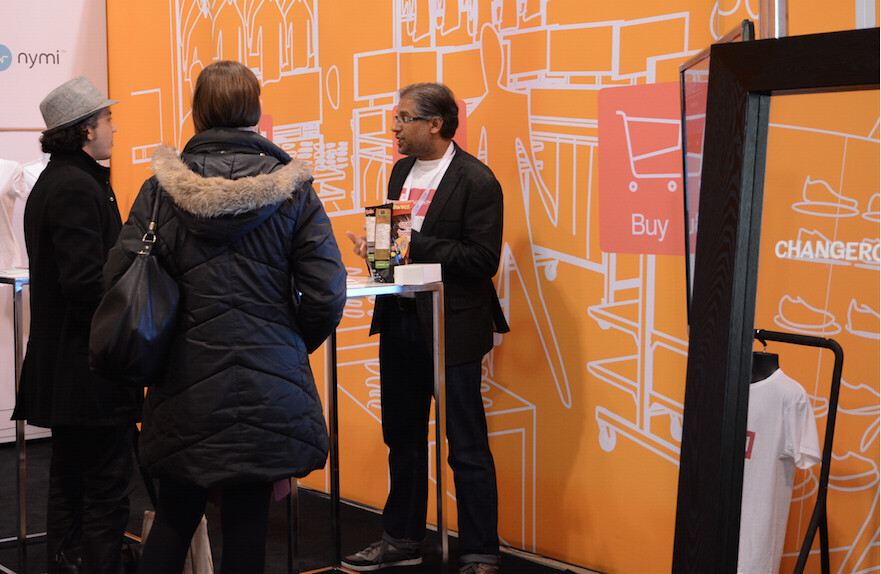 While e-commerce is booming and analysts decry the decline of brick and mortar stores, startups are thinking of ways to marry the convenience of the digital experience with the feeling of physically being in a store.

The Retail Collective highlighted ways in which retailers could use digital technologies to drive customers to their brick-and-mortar stores and engage them with brands.

One of the hottest participants at the showroom was changeRoom, which only officially announced their launch the day of Dx3. Founded in October at MasterCard’s N>XT Hackathon, the plugin lets people browse through products from their favourite stores online, reserve different sizes and colours and book an appointment to try them on at the nearest location. It’s a departure from traditional “webrooming” where people find items they want online and try to find it in store.

“Fifty per cent of all in-store transactions have some component of online research to it,” says Mary Reimer, a co-founder of changeRoom. She says that because of this, it can be frustrating for consumers to search online and not actually find what they want in store. “ChangeRoom creates a seamless experience for the consumers and, from a retailer standpoint, it drives loyalty since you’re actually going in and making that purchase.” Retailers have a real-time screen that tells them who’s checking in for an appointment and what time, and what items that customer has.

If a customer likes what they see, they can avoid lineups by paying directly though their mobile device; because changeRoom is partnered with Nymi and MasterCard, paying through the MasterPass and Nymi band when the app releases to the public in the summer will usher in a new era of shopping and payments.

“We’re really bringing in this future of commerce idea and making sure that these small startups can actually bring their idea to market using a safe and secure payments system,” said Lauren Mostowyk, Director of Communications at MasterCard. “I definitely think we’re going to see more of this.”

Other startups were concerned with how to enhance the experience of consumers who like shopping in stores. Most people ignore the posters and sales associates offering promotions, but they are less likely to ignore their smartphones – an issue that founder Douglas Lusted addresses with Linkett, a hardware that provides its own Wi-Fi hotspot and prompts the consumer with promotions and information about the product if they choose to opt in.

“If you’re walking through the aisle and you want to learn more about a product, it helps you pick what you want to buy and makes it a lot more convenient,” says Lusted. The tool also helps marketers see which products sell the best and which methods – whether it’s YouTube videos or coupons – resonate the most with consumers.

“You can understand what you need to sell your product on a real time basis, rather than a poster or sales sticker where you just don’t know,” Lusted says. Similarly, Blippar engages consumers already in stores with their downloadable app that uses image recognition on products in stores to open engaging content. At Dx3, a scan of a Lucky Charms box using a tablet showed users how it was Lucky’s 50th birthday, and invited them to play a game off their smartphones.

Of course, there were the startups going against the traditional idea of brick-and-mortar stores using augmented reality. Peek is one of these augmented reality apps that allow users to take pictures of any room in their home and download product models through the app so that they could see exactly how it fits into their home. Right now, the company is focusing on furniture.

“Consumers have access to all the products and they can visualize what the product looks like without needing to set up a big showroom in a store,” says Graham Knopp, a developer at Peek. As they haven’t officially launched yet, they are looking to sell the software to manufacturers to develop an app specifically for them, while they work behind the scenes on the development side.

Pinch VR also drew a crowd; the phone case accessory turns into virtual reality goggles and, using “pinchers” you put on your fingers and thumbs, allows you to “shop in a virtual environment and experience shopping within virtual reality. So far, they’ve raised $80,000 from their Indiegogo campaign.