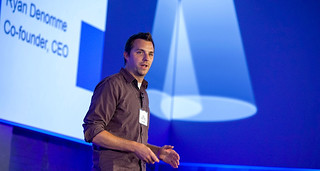 With Silicon Valley ‘godfather’ Steve Blank looking on as a judge, Nicoya Lifesciences pitched its way to a $50,000 prize on Friday night, as the new Communitech Rev sales accelerator graduated its first cohort.

Two other companies among six who pitched, Bridgit and PiinPoint, took home $25,000 each from the Communitech Rev Centre Stage pitch event, in which Blank – creator of the Lean Startup movement and a leading thinker on how build scalable companies – posed some penetrating questions.

His queries, which often focused on specific business metrics, caught a few founders flat-footed, adding tension to the proceedings and leaving any math-challenged audience members scratching their heads.

Blank – who judged the pitches along with Carol Leaman, CEO of Waterloo-based Axonify, and Alec Saunders, Microsoft’s Principal Technical Evangelist in Canada – has written previously on the potential for significant disruption in medical research.