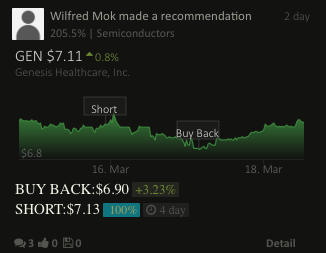 “People don’t take responsibility for their actions, their words and their recommendations,” Zhou says.

He’s the co-founder and CEO of Nvest, a new social network for stock pickers that he says will bring accountability and transparency to a broken system.

Right now, he says online stock picks are a mess – some people don’t give specific recommendations, while others will “tell you when to buy but not when to sell.” Worst of all, Zhou says there’s no way to track how well someone’s recommendations perform.

It’s a problem he sees both among the amateurs using sites like StockTwits, a Twitter-like social network focused on investing, and among professionals. He says that means investors who are looking for recommendations often end up judging who to take advice from based on popularity not results.

Several studies have found that following the recommendations of the popular stock-picking TV host is a money-losing proposition.

That’s what he’s trying to do with Nvest.

“We keep track of people’s recommendations,” he says.

The site has a a standardized format for recommendations and tracks them all. Users are unable to delete recommendations once they’ve been made. The site also uses analytics to identify patters in an individual investor’s recommendation history.

“Without even looking at my recommendations, you can tell what kind of investor I am,” Zhou says.

The site also compares the recommendation history of all its users, creating a sort of leaderboard for returns on investments. Those rankings are also broken down by things like industry. This ability for users to see whose recommendations are performing the best is at the core of Zhou’s monetization strategy.

Users who charge would able to set their own rates, Nvest would take a percentage.

Growing the site is the Zhou’s next main focus.

Earlier this week, he launched a redesign of the site and added some new features.

“A lot of the challenge comes from building the user base,” he says. “Right now we haven’t really done any marketing initiatives.

“In order to build a good company, you have to let other people believe in your company,” Zhou says.