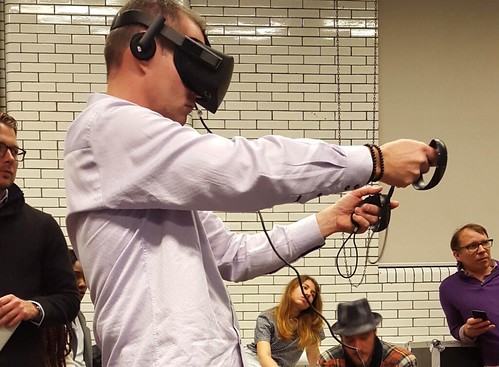 Last night in Toronto over 200 VR professionals and enthusiasts got together to hear from Oculus directly at the Toronto VR Meetup.

Two Oculus representatives—John Bartkiw, Partner Engineering and Paul Jastrzebski, Developer Relations—were in attendance to enlighten the crowd about what is happening from a developer’s standpoint.

Although many of the questions asked by the crowd were given the standard “I don’t know” or “I can’t say” response, this is totally understandable.  The only thing they really confirmed was that the Oculus developer SDK is available now and that Oculus CV1 “Rift” will be released to the public Q1 2016. Oculus Touch release dates were vague stating “available in 2016.”

Now for the fun stuff.

While there was a line up of people 15 deep to try the single Oculus CV1/Touch demo, I managed to negotiate a spot for a few precious minutes.The first thing I noticed about the CV1 was the weight and head strap system. The CV1 was much lighter and felt way more comfortable than my DK2 or GearVR and immediately I felt immersed in the system without having to fiddle around to get it straight or comfortable. It was as if the headset was a one size fits all.  The velcro straps were much easier to use the either the GearVR or DK2 and once it was on my face, the screen seemed to be 100 times clearer than both of the others.

The CV1 also had non-detachable headphones on it that folded back for mounting and dismounting the HMD. The headphones were loud, clear and very well suited to the experience and even though the final product will have removable headphones, my guess is you will want to leave them on.

One of the most outstanding features of the CV1 or “Rift” are the crystal clear and super fast (90Hz), dual AMOLED 1080 x 1200 screens.  Dual screens are a new feature and I can say that they were without a doubt the best VR HMD screens I have ever tried.

Once I was strapped in, I asked Paul “which experience is the best” to which he replied “The Bullet Train” so naturally I went straight for the best. Paul strapped me into the Oculus Touch controllers and immediately they felt awkward and unnatural. It wasn’t until I looked down at my virtual hands that I realized he had put them on the wrong hands  Once I remedied this, the grip and button position made a lot more sense.

There are a lot of buttons on the Oculus Touch controllers and I felt a little stupid trying to figure them out until the game began to give me a tutorial as part of its narrative by showing me exactly which button to push. After this, it became second nature as I time warped around the train by pointing the controllers at a light photon and clicking the “trigger” button. After the motion tutorial was over, it was right into the game.

I was guided to pick up two handguns sitting on the seat beside me which I did and then proceeded to drop on the ground (I didn’t realize that there is another button by your palm that simulates holding things). I picked up the guns again and the shooting began.

The accuracy of the experience was really what made it special. When you are shooting a target, you just point it where you feel it should and pull the trigger. It just does exactly what you expect it should.

The best way to describe Oculus Touch is by saying it is the closest thing to real that we have seen. Compared to the HTC Vive controllers, these felt more natural, more like my virtual hands were really mine.  The avatar hands were perfectly in sync with my own thanks to the separate head tracking and touch sensors (each ships with its own stylish desktop sensors).

I only had a few minutes to experience the CV1 (Rift) and the Oculus Touch, but I can say that I am hooked and I really cannot wait to get my hands on our developer kit for both.

If you have the chance to try these, make sure you do; you won’t be disappointed.