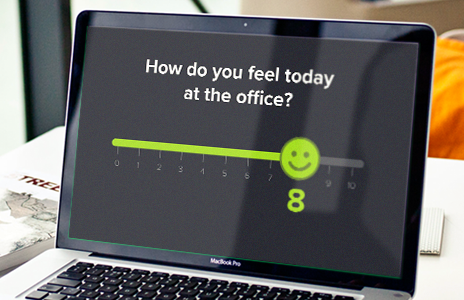 As business grow it can get harder and harder for management to have a sense of how employees are really feeling about their work.

And that can have big impacts on the bottom line; not only do engaged employees lead directly to higher revenues through better work, replacing disengaged employees when they leave is extremely costly.

Right now, the most common way to measure employee sentiment is with annual or biannual surveys. But that approach has big flaws, says Jacob Shriar, the director of customer happiness at Officevibe, a Montreal-based startup that wants to change how companies measure employee engagement.

He says annual surveys cost a lot of money and have low response rates.

“A lot of people don’t think they’re worth the time or effort,” Shriar says.

They also don’t allow businesses to see what effect any changes are having until months later. That’s the problem Officevibe is trying to solve.

The first step has been to replace one big annual survey with a single question delivered every week by email. By surveying more frequently, managers can get a sense of employee engagement in “near real-time,” Shriar says. That allows them to “make small adjustments” and measure the results without having to wait.

Essentially, Shriar says, Officevibe goal is to bring an agile methodology to employee engagement. The single-question email leads employees to a web page with four more questions. It can also ask open-ended followup questions based on their responses.

The whole thing takes about two minutes, Shriar says. And its getting results.

The contextual open-ended questions do even better. Shriar says they get a 97 per cent response rate.

These “pulse” surveys are just the first piece of what Officevibe plans to do, Shriar says.

More features are being rolled out: things like a face matching game, to help new employees learn the names of their coworkers and an activity that will encourage employees to give kudos to their coworkers (Shriar says that research shows recognition from coworkers is more effective than from management).

Right now, Officevibe is aiming its product at businesses with between 50 and 300 employees.

Officevibe might be early stage, it’s only a few months old, but it has a lot of support behind it. Officevibe started as a product of GSoft, a Montreal-based company that provides expertise in Microsoft SharePoint. It’s also attracted $1 million in seed funding.

“We’ve validated that it works already,” Shriar says. “We’ve been getting a lot of positive feedback.”