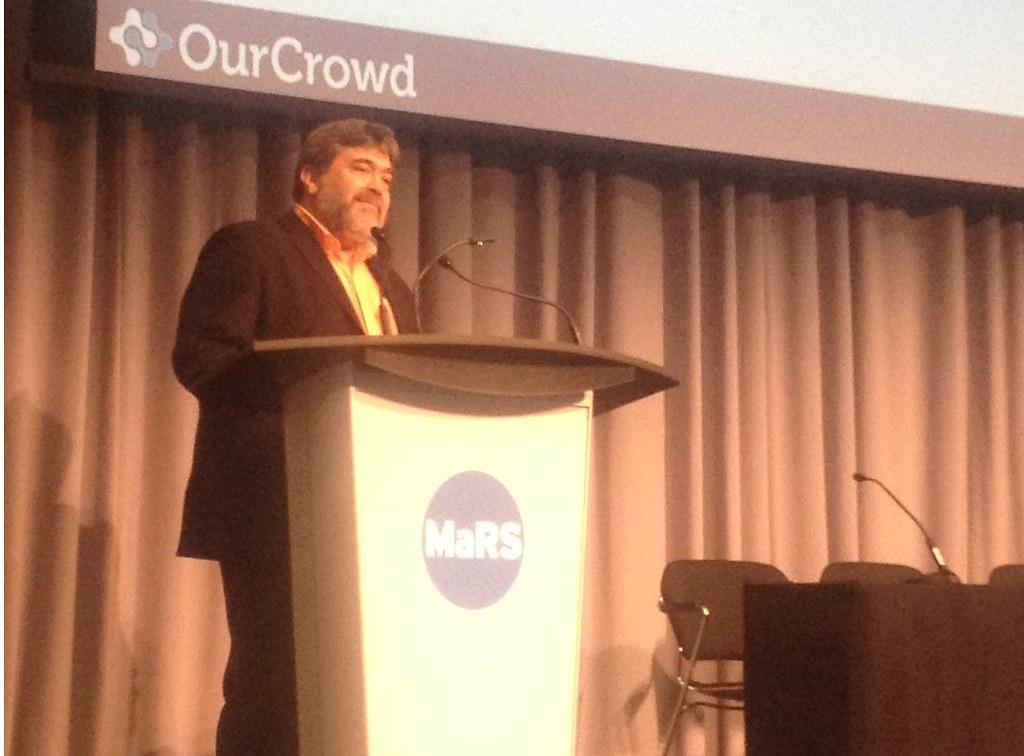 The world’s largest equity crowdfunding platform OurCrowd is setting up shop in Toronto, lured by rock-bottom startup valuations and a technology ecosystem that is starving for investment capital.

“We think there is a very much under-served innovation community here, where there are a lot more technology startups, a lot more entrepreneurs, and not enough money,” said Medved, who was a keynote speaker at the inaugural summit hosted by the National Crowdfunding Association of Canada at MaRS.

“In Canada you’ve got a classic ‘good problem’ for people like me, which is too little money chasing too many deals, and that’s why things are so cheap here,” said Medved. “Your valuations are on the floor relative to Silicon Valley . . . I find that pretty attractive.”

A hybrid venture capital-crowdfunding platform, OurCrowd has raised and deployed over $100 million for 59 early-stage technology startups around the world since its February 2013 launch. Medved said OurCrowd will open its Toronto office by the end of this year or in early 2016, and could later expand to Montreal and Vancouver. The initial focus will be on Toronto’s high net worth individuals who OurCrowd wants to get investing in tech startups now that Canada’s traditional investment darlings oil and mining have turned sour.

“There’s a whole community of people here who are risk takers but whose primary fun has stopped being fun, which was mining and minerals and exploration,” he said. “There are tons of guys who played penny stocks and god knows what and they’re looking for something else to do with their money.”

Medved explained Israel’s startup ecosystem is driven by an investment culture with a much higher risk tolerance than Canada, which is traditionally a risk-averse market. However, he said that OurCrowd seeks to address investors’ risk concerns by mobilizing its staff of 70 and network of 7,000 high net worth backers to act as gatekeepers who can vet deals, guard against fraud and give mentorship. On top of reducing risk with a curating dealflow approach, the platform also seeks to build investor confidence by investing around 5% of OurCrowd’s own capital in each deal.

“Let’s curate this process, let’s create some safety by limiting it to accredited investors,” said Medved, who explained that a minimum buy-in of $10,000 per deal ensures the investor pool remains exclusively high-networth individuals. “We’re democratizing, but only so far.”

He said OurCrowd has made investor education a priority to ensure that new investors are aware of the heightened risks involved when putting money into venture capital deals. He added that it is important to see risk for what it is.

At the crowdfunding summit Medved shared other insights from Israel, a country known as the “startup nation” for its thriving technology sector. He highlighted Israel’s civilian investment in research and development which, as a percentage of GDP, is double the OECD rate despite the country’s relatively small population. Medved said he wanted to inject some of this startup spirit into Canada.

“I’ve made it my priority to start bringing companies here, take some space in MaRS, set up shop for OurCrowd in Toronto,” Medved said. “We now realize this potential between Israel and Canada and we need to step up the relationship.”

He said that it is precisely this ability to create a bridge between investors and startups in distant countries that is one of crowdfunding’s key advantages.

“The beautiful thing about crowdfunding is that you get to reach out over borders across languages all over the world,” he said. “The democratization that we’re all part of doesn’t stop at a provincial border, or a national border.”