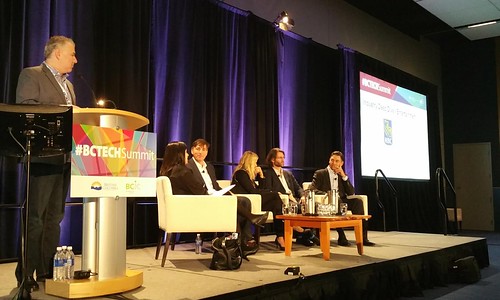 A two-syllable word that each and every one of us is familiar with: passion.

We’ve all felt it at one point or another in our time. Whether it’s the young adult, who stays up past their respectful bedtime in order to sketch in a book next to shallow yellow dim light. Or you’re the nine-to-fiver that spends every other minute outside of their job closing in on that family dream, raising beautiful children.

Passion is something that drives us. It flows through us. It’s kind of like the Force. It can be used to guide us beyond what we thought our limitations were.

The “deep-dive into the BC Entertainment Industry” at the #BCTechSummit begun with a brief intro by Blink Media’s Mike Agerbo who threw the mic to Prem Gill, CEO of CreativesBC and megamind within the BC Film Industry. Gill moderated the panel of experts in entertainment presented by RBC.

Next to her was Don Mattrick, former CEO of Zynga, and former President of Microsoft. To his left, Kirsten Newlands, Senior VP of DHX Media (Sunny With a Chance of Meatballs, My Little Pony), Tarrnie Williams (President of Roadhouse Interactive), and Randy Lake (EVP & GM of Digital Production at ImageWorks). As you can imagine, the clout was palpable.

To open up the chatter, Gill asked Mattrick what he and his team was expecting in the 80’s when they were still in highschool and developing their first tech company, Distinctive Software.

Immediately, Mattrick pulled attention to a member of the audience, who just happened to be one of the investors in his first outing, and then moved on to speak into this beautiful province. “We didn’t know what to expect, we were trying to figure it out as we went.” he answered. But something happened during their experiences in British Columbia. “Here (B.C.) people really build amazing relationships.” That, is what Mattrick said, led to the success of his first company, and why he keeps coming back to BC long after his successes in the United States.

Gill then asked Williams how he sees these communities that have been established in BC due to our heightened relationships. “It helps us build these strong teams. Stronger than anywhere,” Williams said.

“And are there parallels in the Animation space”? Gill directed to Newlands. “It’s all the same greatness. No matter what entertainment is being made. Greatness breeds greatness,” replied the DHX leader.

After Lake added, “The reason we chose to move our (Sony ImageWorks) to Vancouver is because we knew that there was that hotbed of talent and passion.” I found myself stuck on that word.

No matter the question—they were generally aimed at experiences working within BC—the questioned always brought up something that could be boiled down to a wealth of passion.

“The strength of BC’s industry makes it an easy choice for the people we pursue from outside this province when contemplating moving here.” said Williams.

Putting the passion back into the education system is something the entire panel spoke of as well. “We do a lot of scholarships with all the institutions that we can,” noted Newlands. “telling the kid that sketches in their schoolbooks that this is a proper career path breeds that passion at a young age,” she added. “Yes! Places that can hit critical mass by making partnerships with the education boards will win out this worldwide race to be the best,” added Mattrick.

So we’ve got passion in our people, and we’re beginning to put passion back into students and their schools. It seems to me like our future is in good hands.

Gill began wrapping up proceedings by prying some pride out of the panel. Each success story came with the intentional mention that those sources of greatest pride were organic British Columbian developments. Not third party assistance, or work on someone else’s project, but honest-to-god locally crafted product.

At first I was in awe of the people (and their prospective titles, or former titles), but I ended the short talk inspired by their love of our communities. These major role models in BC tech have chosen to stay here, or move here, or return here, for a reason. Which makes me well up with pride, as I too call this place my home, and this industry my family.

At the end of the day it’s our passion that binds Vancouver to a multitude of world renowned entertainment developers, from many genres.

“Of course, the tax credits don’t hurt either,” quipped Lake.