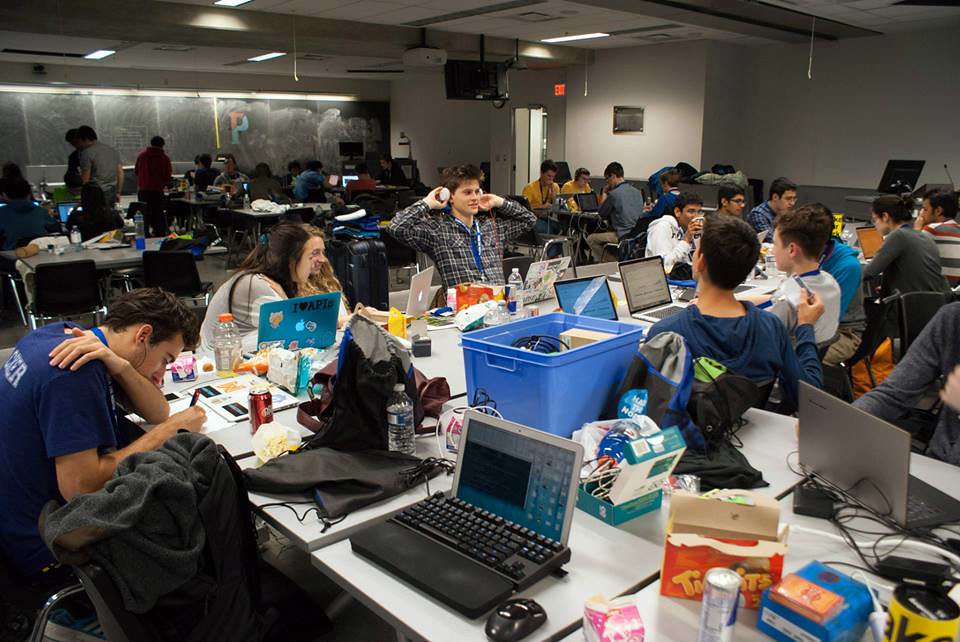 It’s pretty hard to write about day two when day one never ended. At midnight, most people are in bed; everyone but the hackers, that is. As a team we commandeered a corner of the engineering building, blocking up a hallway with tables and chairs. And we had less than 36 hours to work as a team to build something awesome.

None of us knew each other before the weekend, and each had our own unique background. Myself: a data science and business student with entrepreneurial tech experience. A female mechatronics engineer from Waterloo doing a co-op in Toronto. A software engineer from Ottawa, whose affinity for functional programming was only matched by his flow. And a designer and computer science student attending Waterloo.

We wanted a team balanced in talent, gender and experience because it gave us perspective and an edge.

We began the night with a brainstorming session. We knew we wanted to solve a major problem in a practical way. My family has a history of epilepsy, and I have seen firsthand the years of challenges. Some of the problems I noticed included a lack of recording of individual conditions, subjective questions asked by specialists and the lack of available data. So I pitched a solution to the team: creating a Pebble application that could help record and reduce seizures.

Just as we began to hack, I received an email from Y Combinator. I had gotten into startup hours, where a friend and I would sit down with a YC alumnus to discuss startups and technology. Without hesitation I called my friend. “This better be good! Do you know what time it is?!” I heard on the other end of the phone. I hadn’t realized it was 1:30 in the morning and regular people were sleeping. The email superseded sleep and he would be there. Now, back to the hacking!

I passed out around five in a sleeping bag beside my keyboard. We slept, ate and lived by our computers for nearly 36 hours but we were determined on building a nocturnal-seizure-tracker-and-reduction Pebble application. By using the accelerometer, we could detect whether or not someone was having a seizure at night. Not only could we identify the number of events, but strived to determine the severity of an attack. This connected to a data platform, one that could communicate results to not only the user but their medical professionals.

My friend had arrived and we went for our YC hours. We had been told in advance we would meet with Eric Migicovsky, CEO of Pebble, raised in Vancouver and educated in Waterloo. When we entered, Eric asked if we could take a walk instead of sitting. We spoke about business ideas and technology ventures. His questions were provoking and challenged us on almost every question we had.

In the middle of a question, YC president Sam Altman interjected. He spoke with such enthusiasm about the hackathon and the Waterloo startup community, how it was one of the best he had ever seen. He was absolutely right.

We then decided to take advantage of some of the event’s offerings, mainly the free cotton candy and dress-up photos. It felt like an out-of-body experience: the CEO of a company taking on industry giants, asking me provoking startup questions while  making himself a stick of cotton candy and wearing a feathery boa and Kanye glasses. Only in startups.

The experience of meeting Eric made me look forward the difficult mark of the hack. The struggle and grinding involved with startups had made him into a better entrepreneur. One that had a precise idea of what he is building, who he is building for and why.

With alot of adrenaline and few cups of coffee, we knew we were in for a long hack.