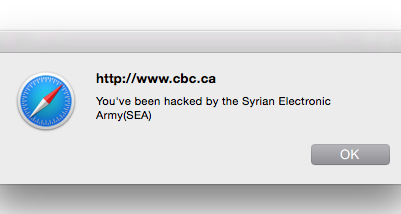 The Syrian Electronic Army, a politically motivated group of hackers, temporarily took over the faces of several major websites, including the CBC, the NHL, and Forbes.

The hack was allegedly harmless, triggering nothing more than a pop-up window for visitors. The CBC tweeted that was “no risk to users” and the issue was resolved quickly.

The Syrian Electronic Army started in 2011. The group likes to attack news outlets, having previously targeted the New York Times, the Financial Times, and the Washington Post.