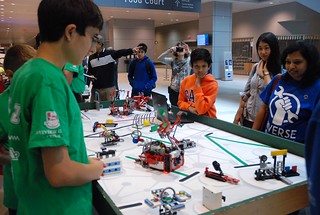 The MaRS Discovery District was host to Toronto’s third robotics hackathon event this weekend by Get Your Bot On.

Get Your Bot On is a 34-hour hackathon focusing on prototyping robots for various real-world solutions.

The theme of this year’s hackathon is “Healthy: People and Environments,” which ended with five teams as winners.

The hackathon separates their demonstration sessions into two categories. The first are the family teams, which include members under 12 years old. The second are the teams aged 12 and up, including professionals working in the industry. This category is judged based on innovation, technological excellence, and design for human interaction.

The winner of the family team was the Durward Family, who built the Waterbot 9000, a water carrying robot that brings bottled water and keeps people hydrated.

The innovation team winner was Gest-Jump, for building an autonomous jump rope operated through gesture based interaction.

For technical excellence, team Indie won with their robot that allows those who have suffered from a traumatic disorder to rehabilitate themselves.

The winner for design for human interaction was team Calmstress for building a robot that resolves panic attacks before they start through pulse detection and pressure points.

The final team, who won the ultimate workshop prize, went to team Sitand for building a chair that pivots from sitting to standing, while creating a desktop app that measures your productivity to the chair.

Each team is given a basic hardware kit to build a robot that is supported by either the Raspberry Pi or the Arduino Uno.

Over the weekend, the teams had access to craft equipment including 3D printing, 3D modelling, and laser cutting.

Participants were subject to five simple rules: the robot must move in some way, has to incorporate a microcontroller or microprocessor, must be able to sense something in its environment or receive input, must be demonstrated on the final day of the hackathon, and should relate to the theme of “healthy.”

Get Your Bot On prides themselves on bringing together unlikely collaborators to try out the world of robotics for the weekend.

“We really want to encourage people who work in particular domains like health or the environment to work with technical people, because that’s where you can recognize the problems and challenges that exist in that domain and the opportunities to solve them with robotics,” said Adriana Ieraci, founder and hackathon director.

Even those unfamiliar to the field of robotics had a chance to try out new robotics hardware, integrate wearable devices, and explore gesture recognition technology.

“We like to make this hackathon accessible for people who are not technical. That’s why we want to marry the domain expertise with the technical expertise to actually build something that could solve a real problem in the real world,” said Ieraci, who founded Get Your Bot On in 2012.

This year welcomed 25 teams and displayed a showcase of new technology from local robotics companies.

Get Your Bot On has been requested to expand across the GTA due to popular demand.