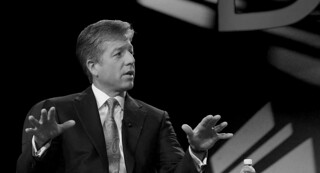 Politik, a global technology media company headquartered in Vancouver, is pleased to announce that Bill McDermott, CEO of SAP and best selling author of Winner’s Dream: A Journey from Corner Store to Corner Office, will be opening next year’s Interzone conference.

The sophomore edition of Interzone will be held at the Sheraton Wall Center in downtown Vancouver on April 11 and 12, 2016. The event will feature imagineers from organizations who are leveraging innovation to redefine survival in the 21st century.

In addition to delivering the opening keynote presentation, McDermott will also be participating in a vibrant debate about the future of enterprise technology called “Year Zero” with Jackie Yeaney, EVP of Strategy and Marketing at Red Hat and Jessie Adcock, Chief Digital Officer at the City of Vancouver. The panel will be moderated by Frederic Lardonois, Writer at TechCrunch.

Before joining SAP, the world’s largest software company in 2002, McDermott served as EVP of Worldwide Sales and Operations at Siebel Systems and President of Gartner. He is a passionate believer in engaging up-and-coming young leaders and has been recognized by organizations ranging from City Year of Greater Philadelphia to the Children’s Aid Society of New York City.

Bill leads SAP’s 75,600 employees and more than two-million-person ecosystem and first novel “Winner’s Dream” was praised by U2’s Bono for “seeing ambition and compassion as comrades in the workplace, rather than competitors.” Earlier this year, Bill almost died in a freak accident where he lost his left eye and responding by proclaiming, “it is important to stand up again if you fall down.”

Will enterprise technology stand up again and survive the onslaught of punk rock insurgents threatening to destroy the very body of existence they once built for them? Find out at Interzone. Registration is now open at www.interzone.io.