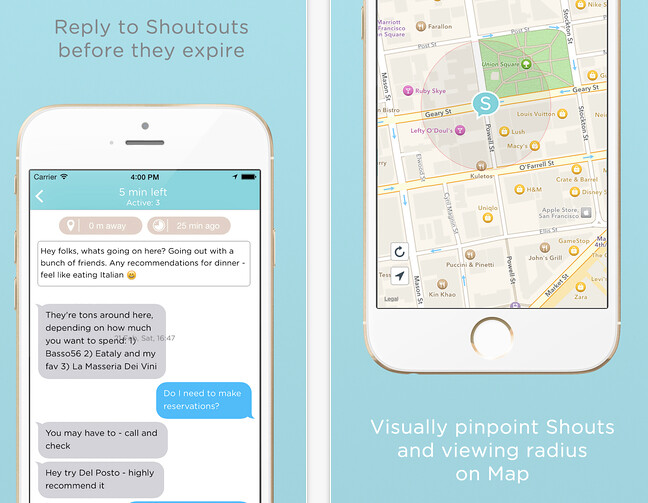 As far back as three years ago, a few things happened that made Sherry Qureshy think about developing his first app.

First, a friend of his got fired from his job after making an unflattering tweet during a frustrating day. Second, during his time commuting from Burlington to downtown Toronto every day, he noticed that the people reading Tonight, a now-defunct Toronto commuter newspaper, would almost always instantly flip to the back page where the paper prints their Shout Outs – a list of missed connections that people would email to the editor to be printed in their issue the next day.

“Why should I have to wait a day? If I’m standing at the Queen’s Park TTC station today, tomorrow if someone reads it, that person isn’t going to be there tomorrow,” Qureshy says. “We have to get this in digital form and bring the phone into it and make it real time.”

Four months ago, Qureshy took this idea and developed Shoutzapp, a Toronto-based app that lets you anonymously “shout” your thoughts in the Shoutzapp feed. Though similar to popular anonymous apps like YikYak and Whisper, Shoutzapp actually allows you to set a particular geographic location; if you wanted to speak to only those in your immediate area, or as far as five kilometres away, you could do that.

Conversations are sorted into categories, including News and Classifieds, so you can sort through what kind of content you want to see. The app lets you set an expiry time for your posts so that the content is always relevant, and since there is no registration or sign-up process, the app ensures complete anonymity.

“It solves the problem of being anonymous and it also lets you communicate easier with others,” Qureshy says. “If I approach you on the street, it’s like, ‘Why is he approaching me?’ But if I wanted to ask if there’s a good restaurant in the area on Shoutzapp and people reply, it removes that first hurdle.”

As the app grows, Qureshy realizes that they will need to figure out ways to monetize Shoutzapp. Eventually he’d like to include a sponsored category; for example, if a restaurant using Shoutzapp wanted to advertise that they were having a two-hour lunch deal, they could do a 500-metre shout out to people close by.

“People will have to report them; as much as we can we try to look at stuff on the back end, but we don’t want to unnecessarily restrict people,” Qureshy says. “But I think pictures are great because instead of typing something all out, you can take a picture and ask what people think of something.”

So far, they’ve garnered about 1,500 users in the last few months, and even got an interview aired on the Comedy network during The Daily Show With Jon Stewart. Though Shoutzapp is only available for iPhones right now, Qureshy and his team are currently working on developing it for Android.