Shutterstock’s photo subscription service kicked off with one man and his camera. CEO Jon Oringer launched the online marketplace in 2003 by uploading 30,000 stock photos he took. The small company has since evolved to 250,000 contributors who add 150,000 new pieces of content to the site every day.

So when Shutterstock shimmied into the royalty-free music business, the stock media company immediately shook up its product offerings. The global marketplace—one time exclusive to photos and videos—started licensing music in late 2014.

Less than a year after their initial foray into the music game, the New York City-based Shutterstock acquired Montréal-based PremiumBeat; a curated royalty-free library of high-quality music and sound effects. Co-founded in 2003 by François Arbour, the PremiumBeat office became the Shutterstock’s first Canadian office. This June, the company grew its presence in Canada once again and acquired Toronto-based Flashstock.

More than just a website, PremiumBeat has anchored itself in one of the fastest growing segments in the online music business. They have attracted notable clients including NASA and GoDaddy, providing music tracks and sound for use in films, games, videos, creative projects and more. 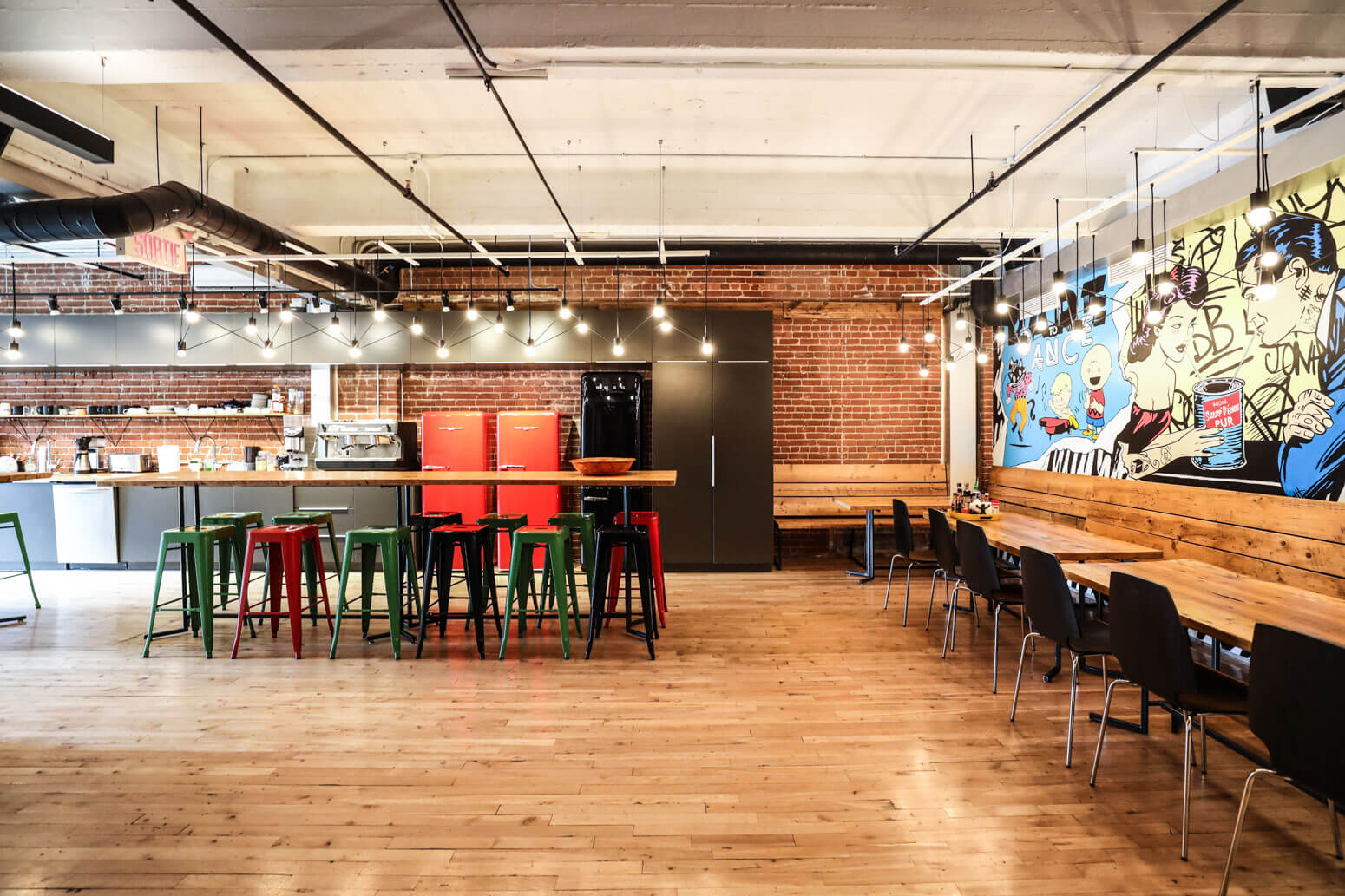 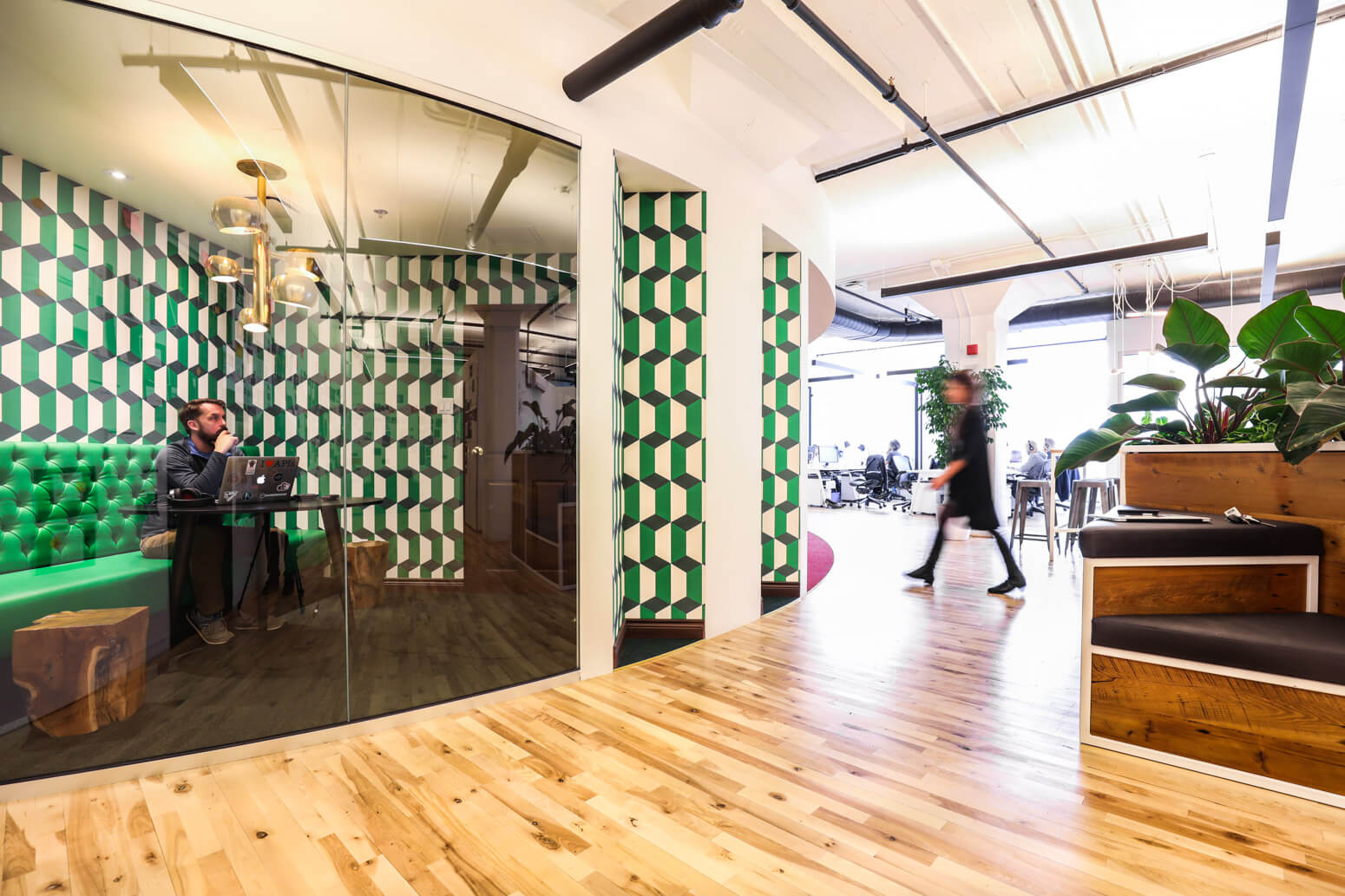 Pre-acquisition, PremiumBeat moved into the Plateau Mont-Royal loft space in 2013. The building was the result of three smaller spaces merging together—once occupied by tenants of Québec’s historic garment and textile industry. 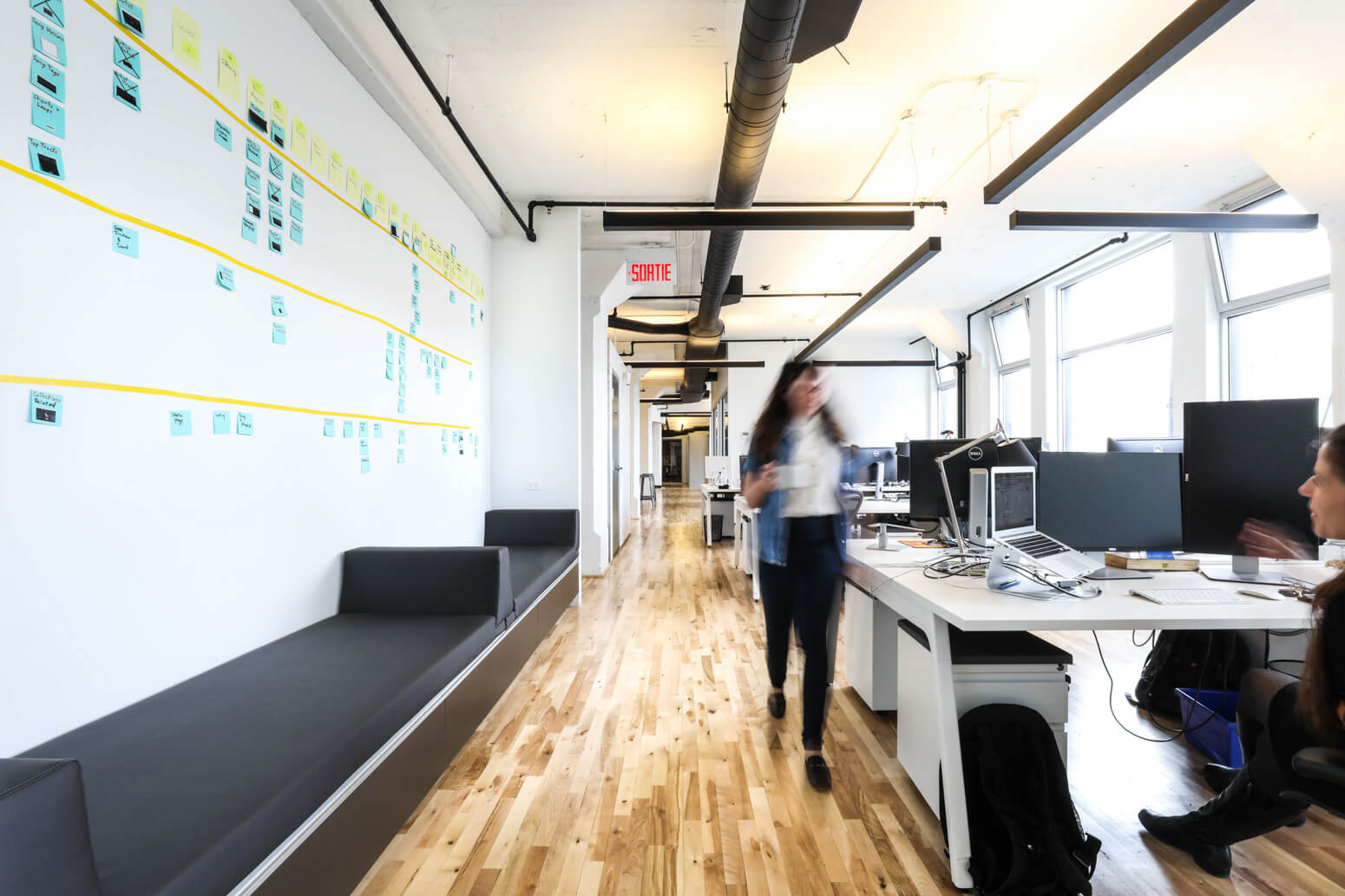 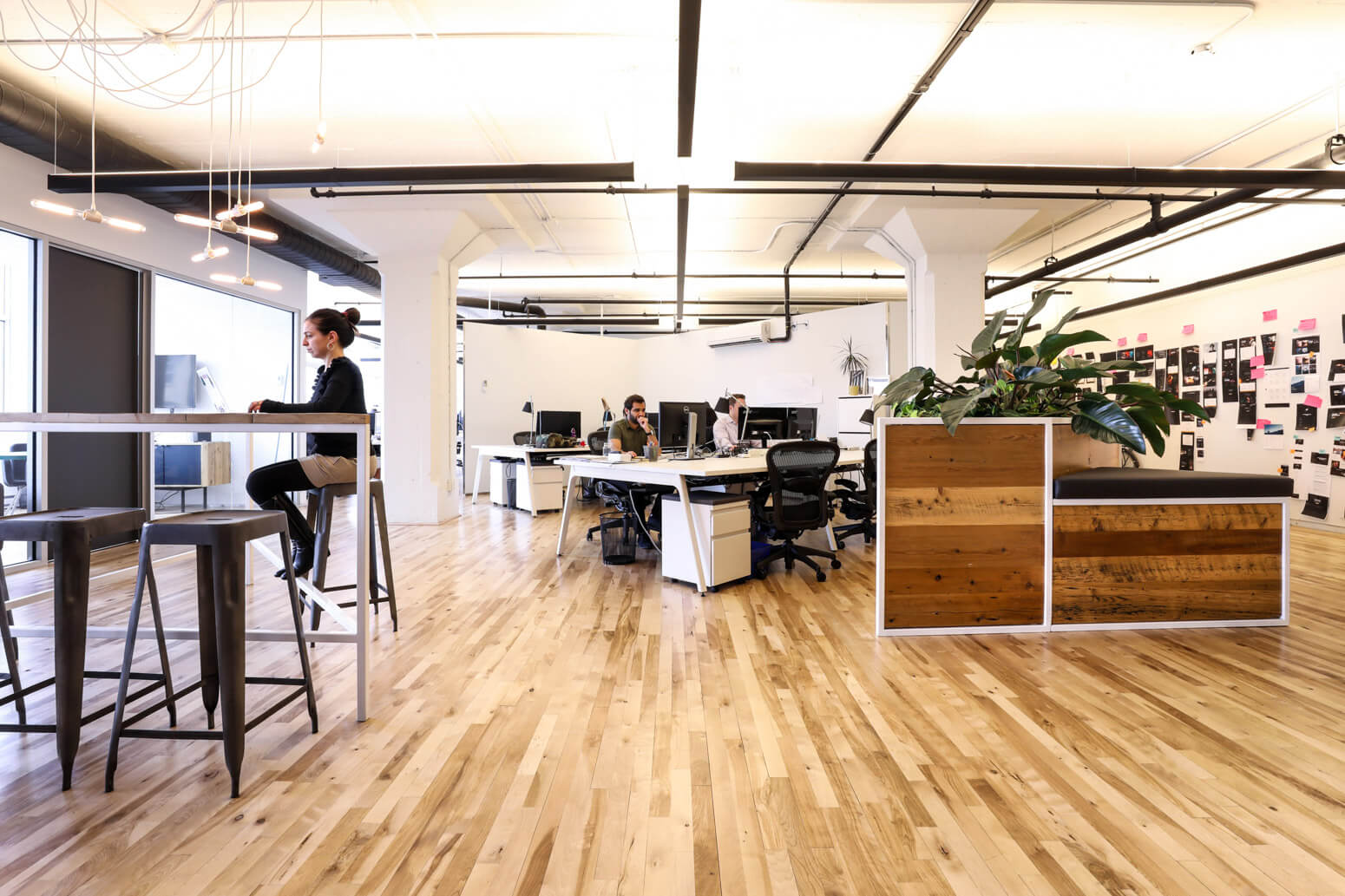 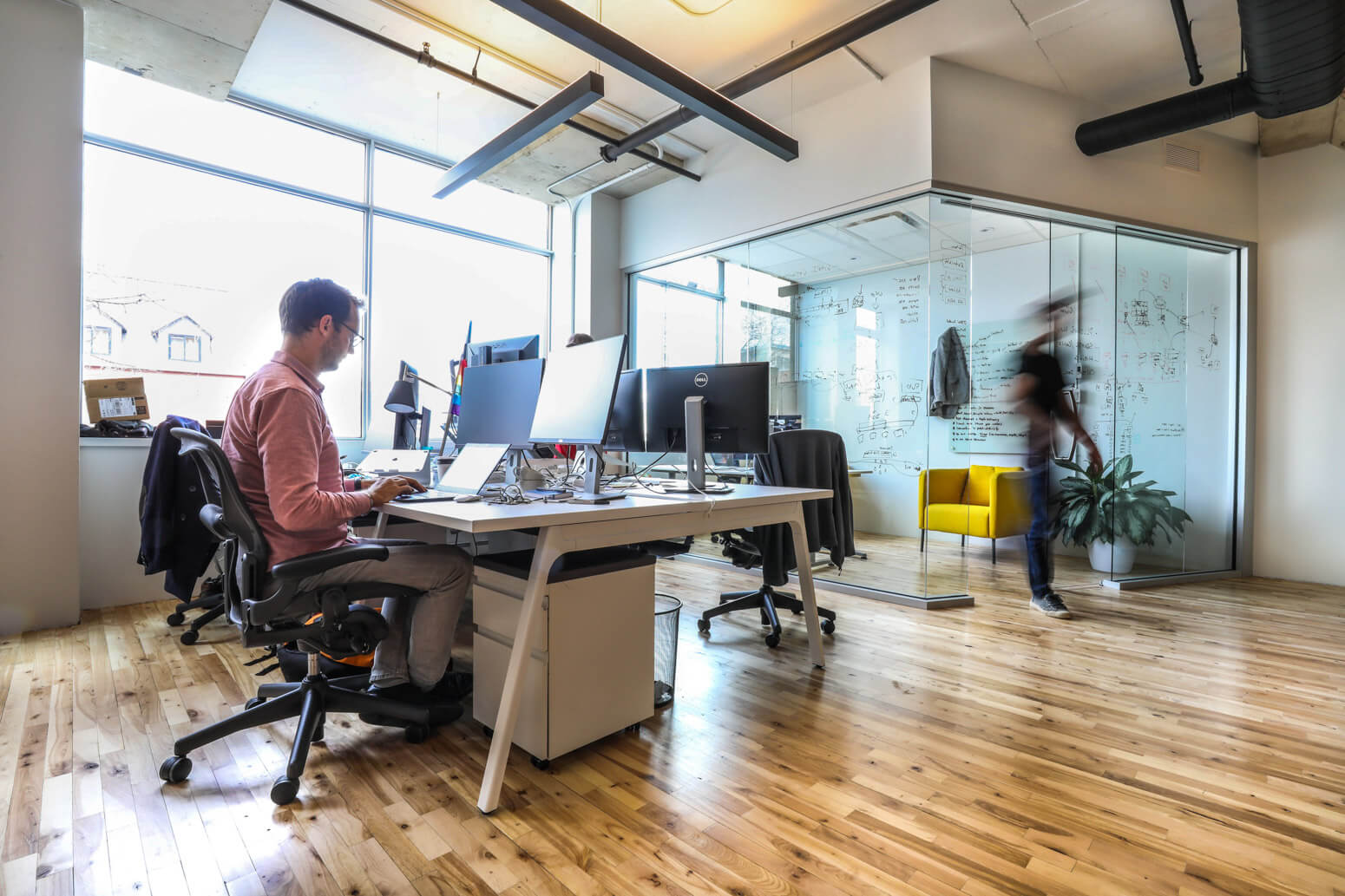 No surprise here, the meeting rooms are named after iconic albums that span many genres from Outkast’s Speakerboxxx to Radiohead’s Ok Computer and Pink Floyd’s Dark Side of the Moon.

The Shutterstock Montréal team has a deep appreciation for food, which means there’s truly something for everyone at the office when it comes to snacks; Greek yogurt with granola and fresh fruit or a St. Viateur bagel smeared with cream cheese. It wouldn’t be a true yogi welcoming office without stocking kombucha and coconut water. 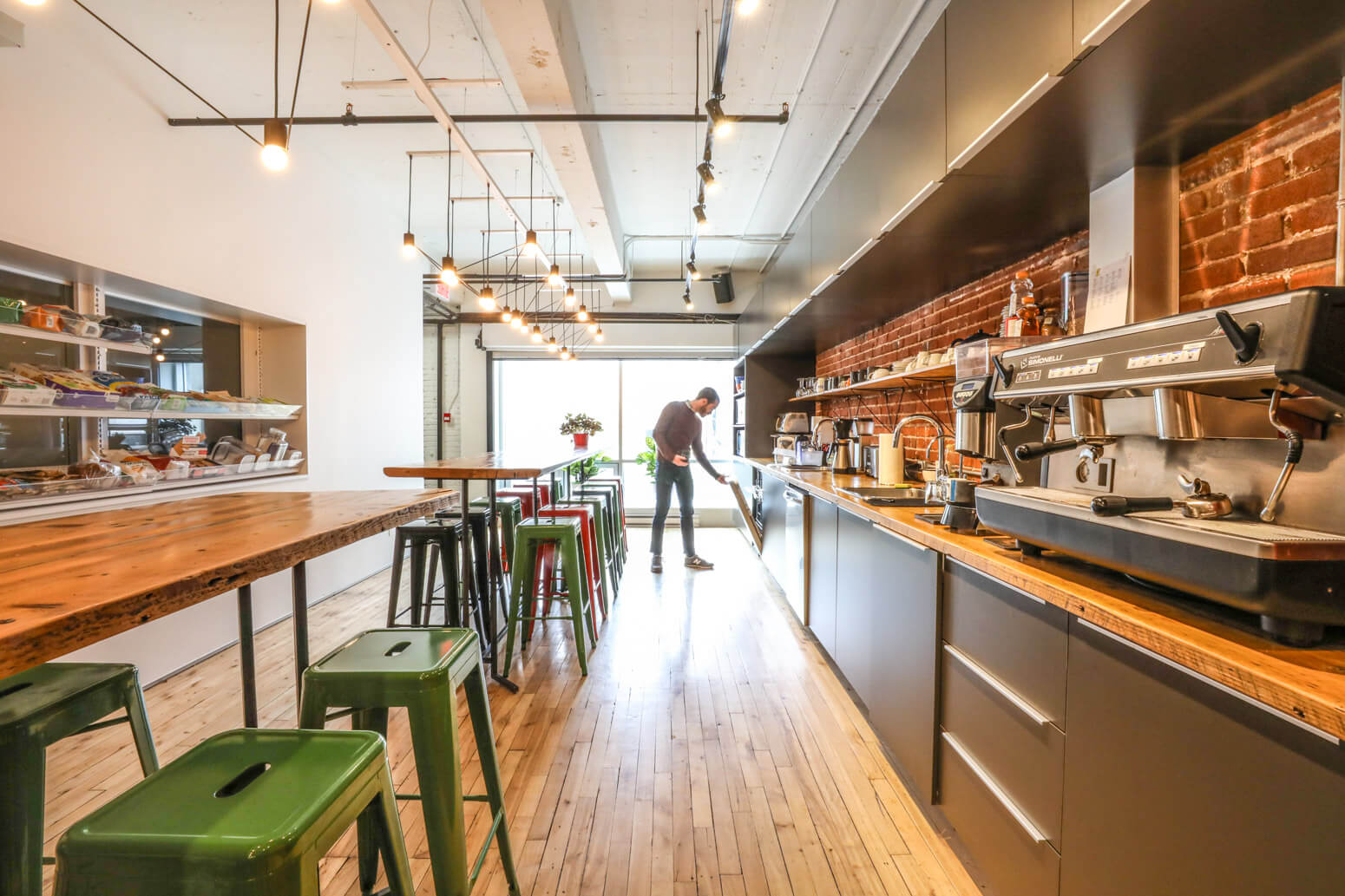 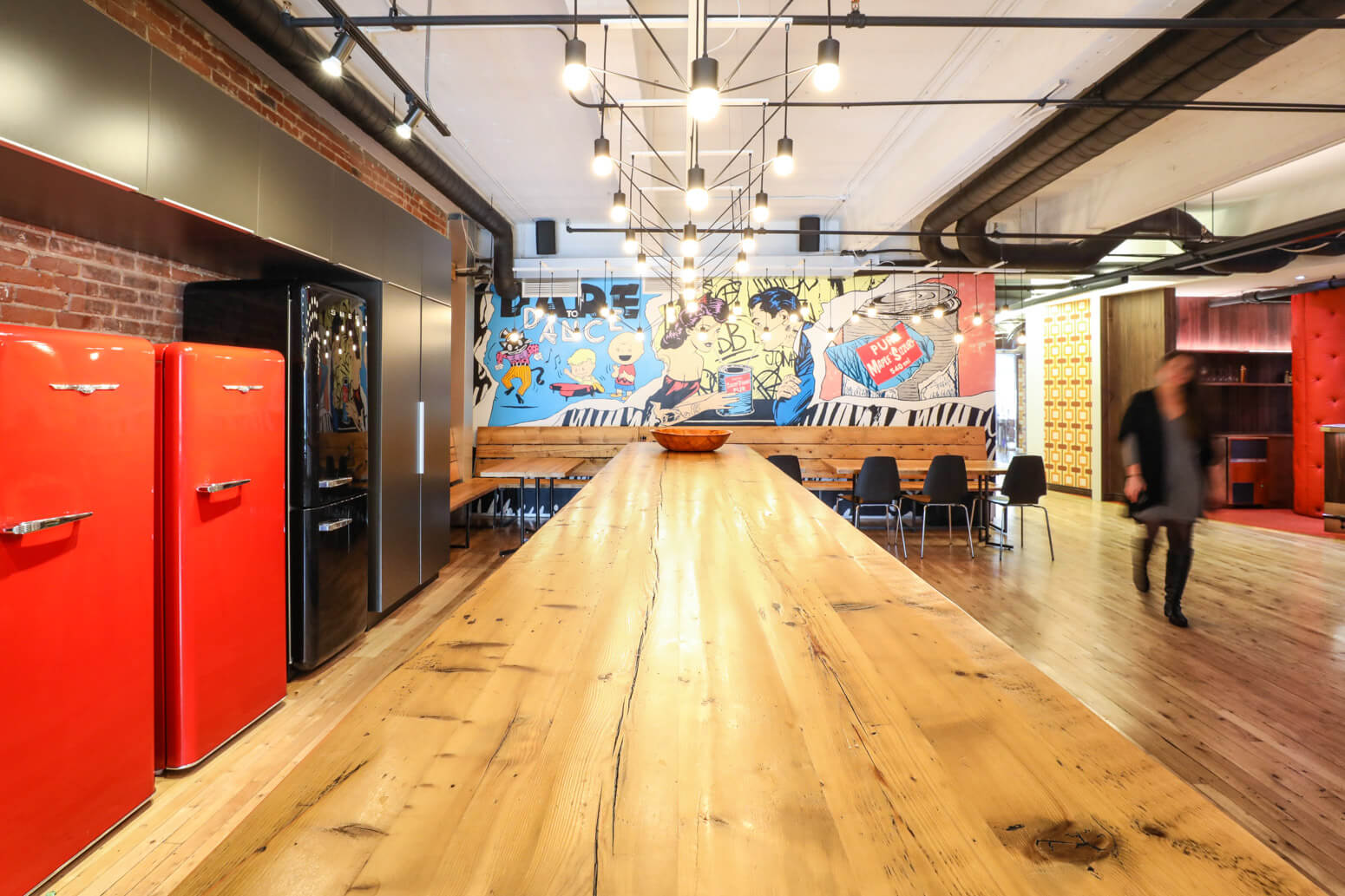 Caterers and food trucks in the city fuel the team each Wednesday, including Tejano burritos and the vegan-friendly Copper Branch. At the end of every month, the music team celebrates the birthdays with some killer local treats (read: cannolis, doughnuts, or ice cream).

This office that takes food seriously also takes care when it comes to coffee. The kitchen is equipped with a Nuevo Simonelli 2 espresso machine. Local roastery Dispatch supplies the beans and even brings in a highly skilled barista each month to give lessons—it’s kind of a big deal. 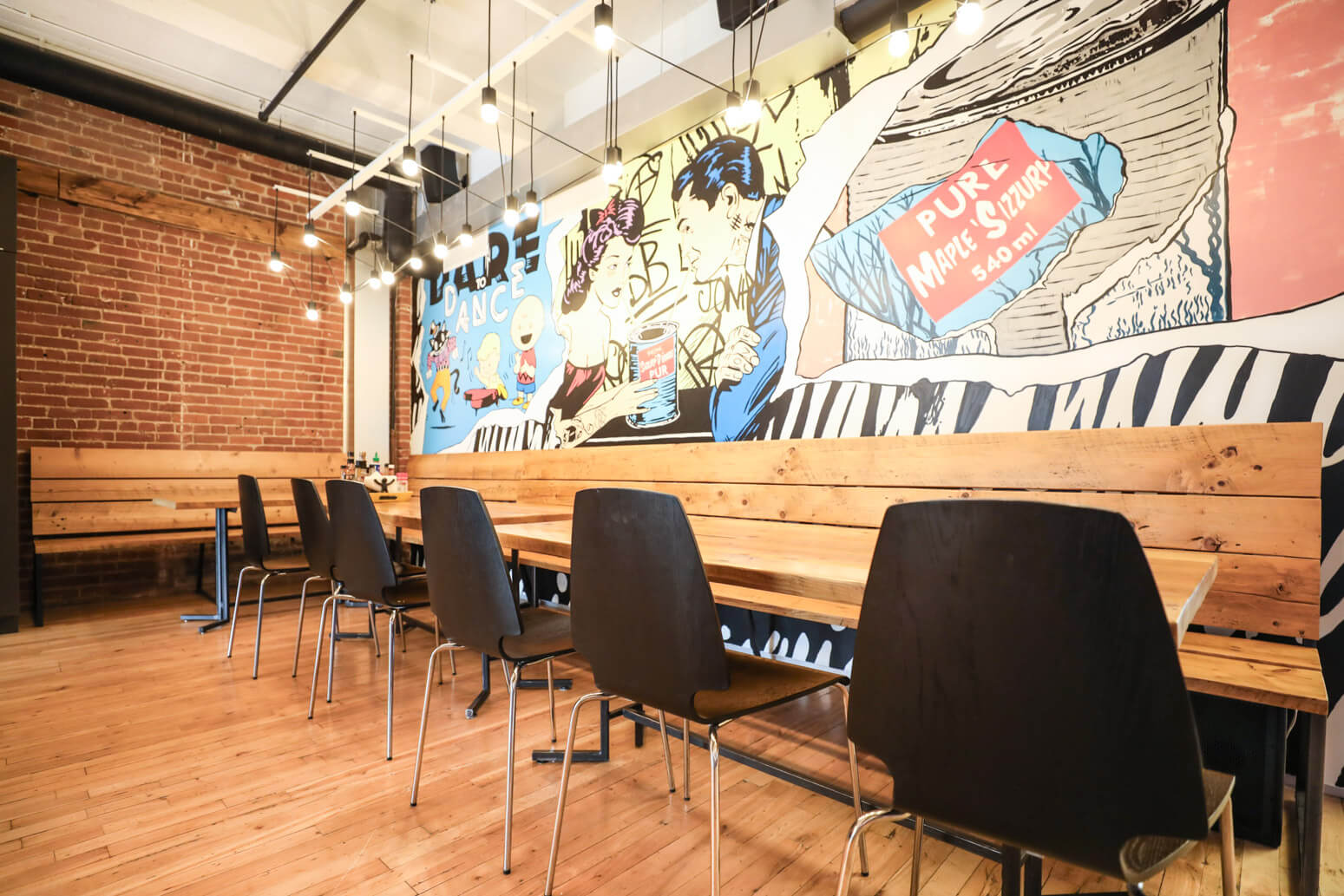 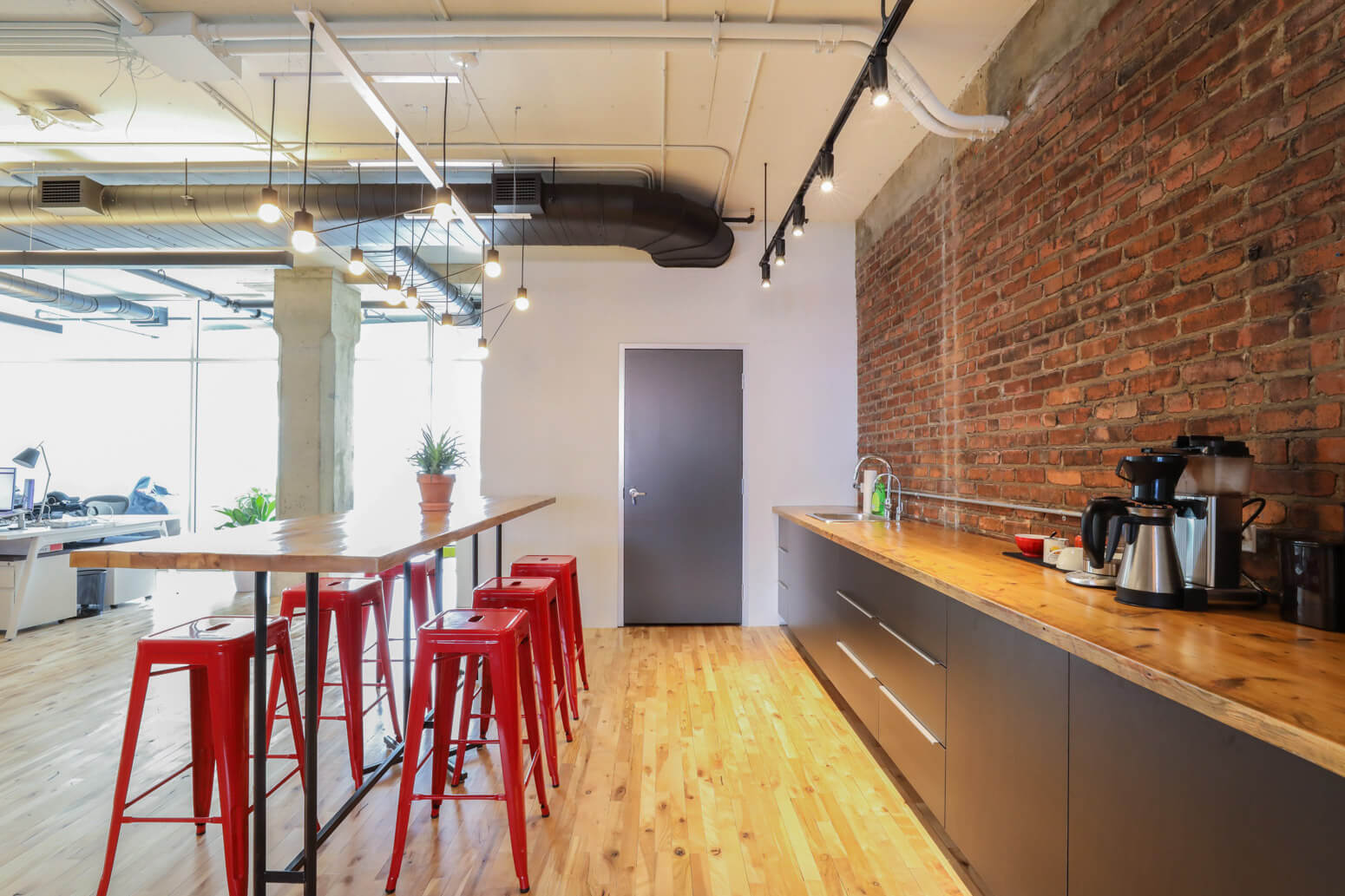 With the belief that customers come first, Shutterstock values humility, positivity, transparency, and freedom–championing innovation and learning through experience.

The company also values recognition in the form of rewarding its talented team. They host a bi-annual offsite retreat that includes a town hall meeting, team building activities, relaxation, and an opportunity for everyone to get to know one another better. 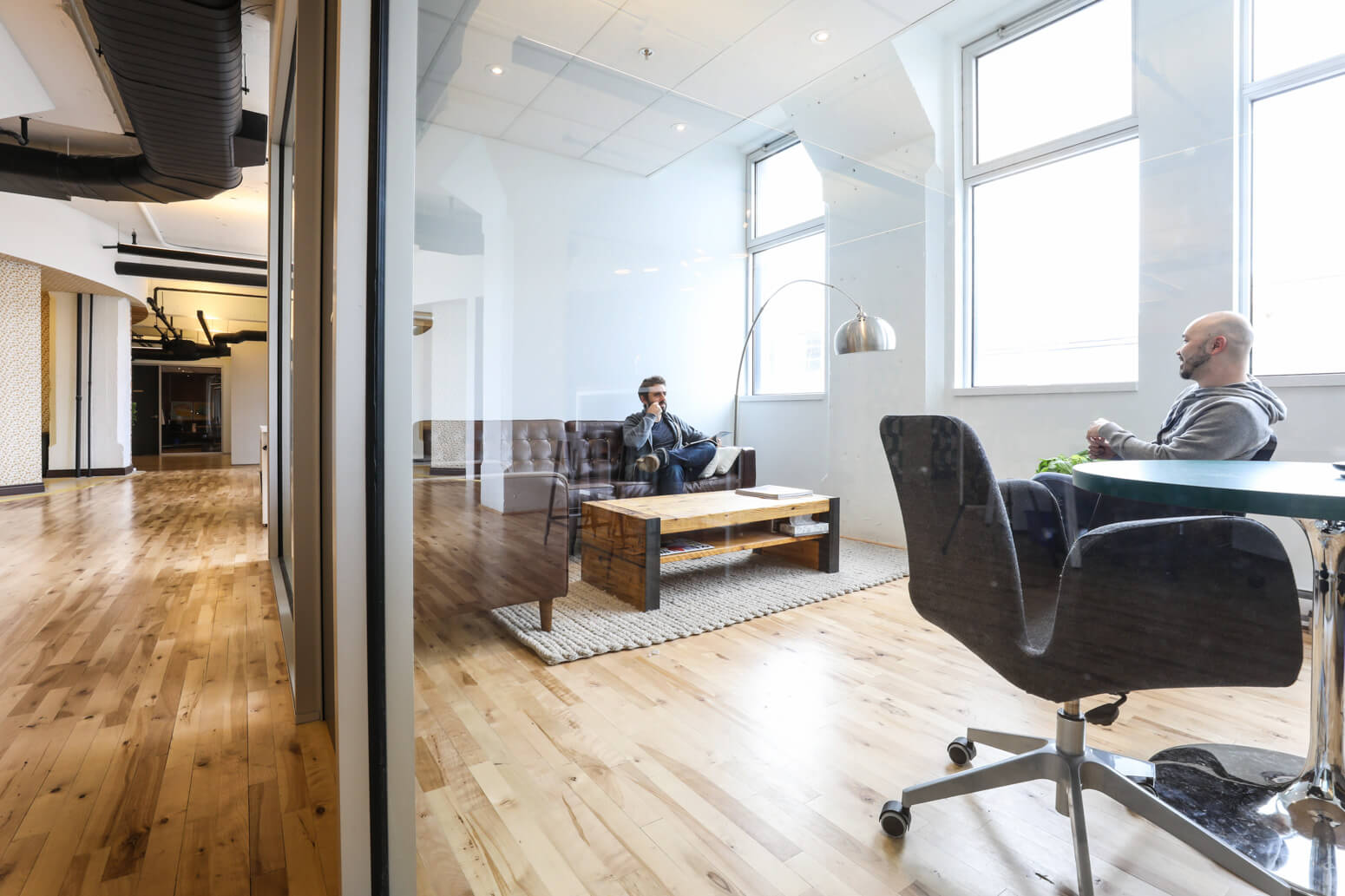 All Shutterstock employees can tap into an annual Career Development Budget and annual Learning Allowance budget. The latter can be used on anything from piano classes to Spanish lessons. 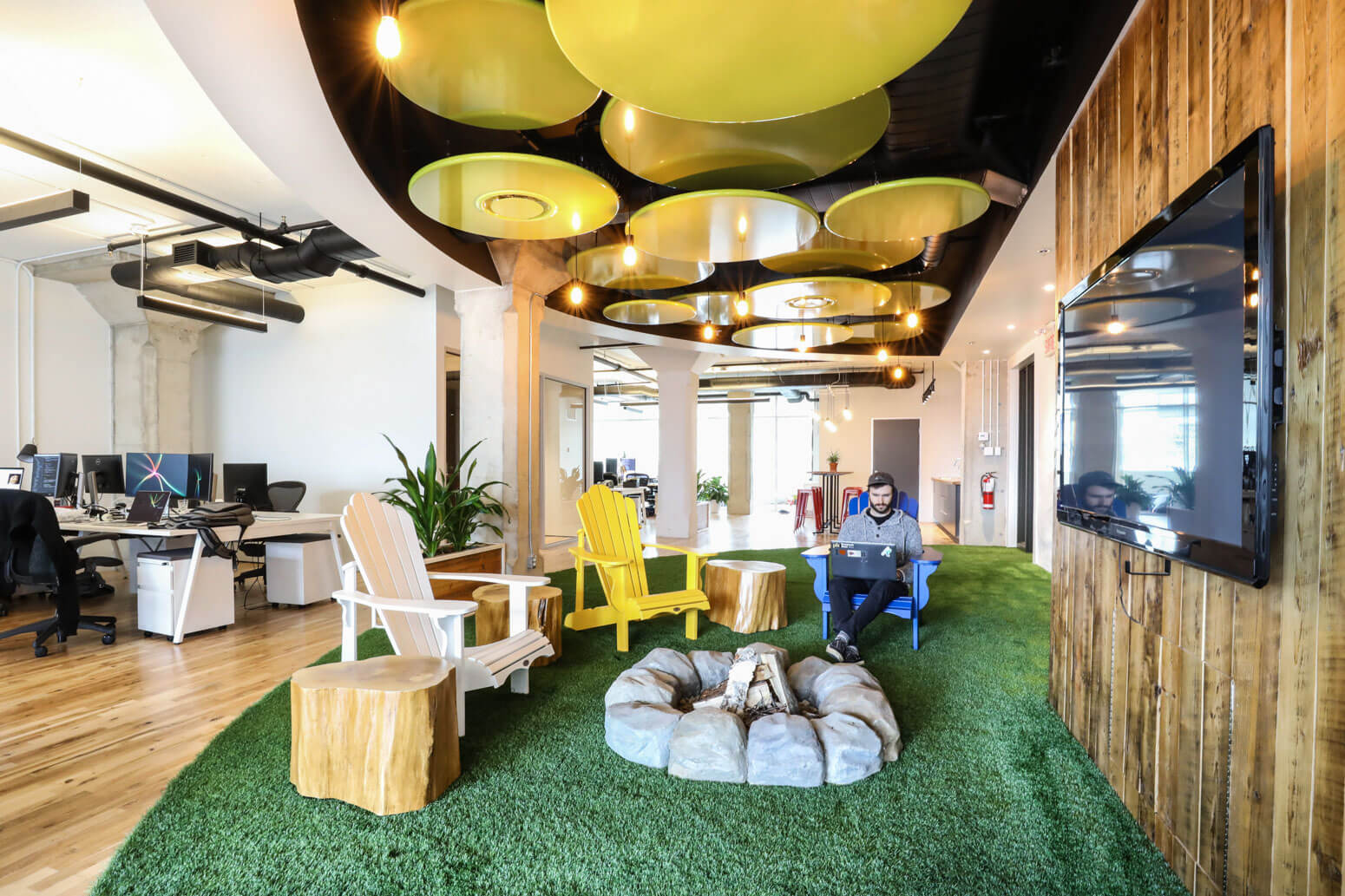 Employees are encouraged to hit the pavement with their running club, grow their green thumb through gardening classes, and join in on a softball game. The company also offers stock options, an RRSP matching plan, and a public transit benefit for commuters.

What music-centric office would be complete without an actual jam space? Embracing the space’s eclectic and playful feel, the music room is sound-proofed and well-equipped to accommodate any programmers moonlighting as a Zeppelin cover band.

At the end of the week, pull up an antique crank-stool to the speak easy bar, or maybe step into the DJ booth to spin beats or claim a controller in the lounge for some hardcore gaming. 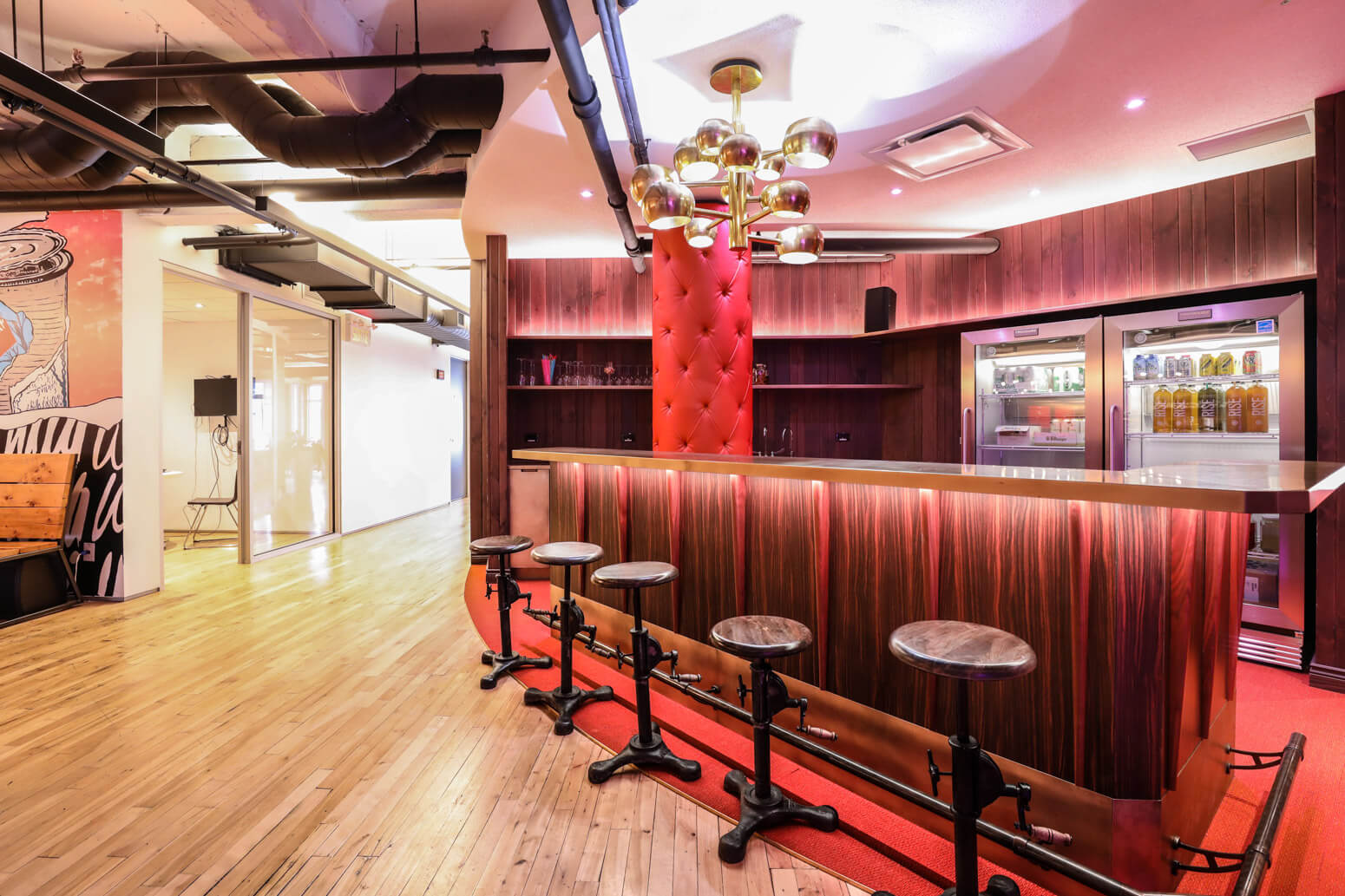