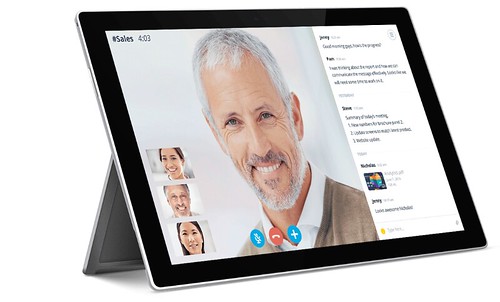 “The key insight for us is that there are a bunch of offerings out there for communication but they’re really fragmented,” says Eric Lifson, VP of Marketing and Strategy, “So it’s hard for everyone to be on the same page.”

Lifson notes that their target demographic, professional teams of five to 30 people, use a variety of different platforms to cover their communications needs, such as Slack for chat, Skype for video calling and GoToMeeting for web conferencing, which leads to a fragmented experience for the team, and an unprofessional appearance for the company. The only other choice, says Lifson, is a more expensive enterprise solution using a traditional telecom network such as Rogers or Bell.

“Over the last several months we’ve talked to about 1000 companies and we kept hearing the same stuff, which was, ‘I am overwhelmed, it’s very expensive and it’s fragmented.’”

Lifson adds that with one-third of the US workforce being freelance workers, they are tapping in to a pain point that many companies are concerned about: ensuring transparency and a professional appearance from their workforce.

In the unified communications as a service (UCaaS) space, Skrumble is joined by Cisco Spark, a service for messaging, meetings and calls that has yet to launch. Lifson expects that Skrumble will beat out the corporate giant’s pricing.

Skrumble is currently offering its service at $10 per user per month for small groups that require messaging, peer to peer calls and video conferencing, $20 for mid-size groups that require the same plus team calling and $30 for all of the aforementioned features plus calling over a public switched telephone network.

Founded in 2013, Skrumble has beta-tested throughout development and, at launch, is currently working with ten customers including bath product-makers Bathorium, and consultant company BetterVu.

The company was boot-strapped until September 2015, at which point a seed round of 500K was raised, led by board-member Bev Margolian. Skrumble is currently closing a round which Lifson says will be announced over the next few months.

The company’s aim, after its February 25 official launch party hosted by tech entrepreneur Amber Mac, is to have 500 paid users by April 1, and 10,000 paid users by the end of next year.

“We’re not a typical Canadian startup… We’re kind of the 100-ton gorilla,” says Lifson, “We’re trying to bold and audacious with our goals.”