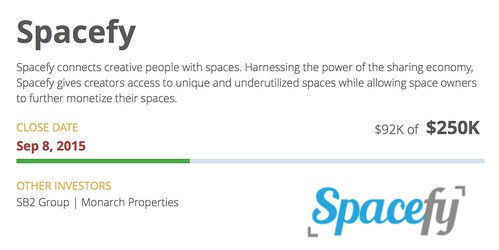 Spacefy, a Toronto-based startup touted as an “AirBnB for creative spaces,” is the first early-stage tech firm to be successfully seed funded through InvestX’s Waverley.

Spacefy raised $300,000 in seven days via the Platform’s database of retail-accredited investors.

After the 2013 creation of Title II of the JOBS Act which allowed private companies to raise capital over the Internet, Waverley launched, providing a web-based bridge between growing, innovative companies seeking funding and a pool of motivated private investors. Similar changes are also taking place in Canada.

“The significant interest Spacefy enjoyed was indicative of the major appetite in the market for private investment in disruptive technology which is backed by a strong business model and growth strategy,” InvestX CEO Marcus New said.

We’re looking forward now to our official commercial launch and demonstrating the platform’s value as a new resource for location scouting across the city as well as for performance and practice locations for the Toronto’s wide and diverse creative community,” said Spacefy cofounder Judeh Siwady.

Harnessing the power of the sharing economy, Spacefy gives creators access to unique and underutilized spaces while allowing private and commercial space owners to further monetize their spaces.