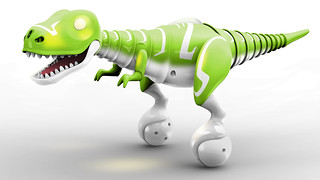 In 1994, Toronto-based entrepreneurs (and best friends since the age of 10) Ronnen Harary and Anton Rabie launched their first toy on the market with a startup budget of just $10,000. The Earth Buddy was a panty-hose-covered head filled with grass seeds that sprouts hair when watered.

The launch was a hit and soon, retailers like Walmart were calling to distribute the toy in their stores. And so, Spin Master was born – with Harary, Rabie and their university friend Ben Varadi at the helm.

Today, the global toy innovator, or “Spinnovator” as the company calls it, enjoys double-digit growth while integrating extensions of many of its toy lines with the creation of entertainment properties, companion applications, games and digital experiences.

A true Canadian entrepreneurial success story, Spin Master has been nominated 34 times, winning 18 of the Toy Industry Association’s “Toy of the Year” awards for its products.

The company just celebrated its 20th anniversary and recently met with bloggers and media to discuss where Spin Master has been and where toy technologies are headed. “Spin Master is like Roger Federer when he was 21 years old,” says Rabie – a tennis enthusiast. “We’ve had lots of practice, had some losses but have also won a few majors along the way. And while we still have a long road ahead of us, our passion is as high today as it was 20 years ago.”

Below are some of the top technology trends that Spin Master foresees for toys and hot holiday gift ideas for the tech-inspired child this year and into 2015.

Over the years, Spin Master has made a lot of acquisitions and inked partnerships with technology firms in robotics and electronics. Some of its most notable brands that use interactive and engaging toy technologies include:

The Air Hogs Zero Gravity Laser Racer: Guided by a laser control, the toy offers a fully functional RC car that drives on the floor, up the walls and even upside-down. And it goes wherever you point it.

Zoomer Dino and Zuppies:  Zoomer Dino is a wild pet dinosaur that roars, chomps, spins, chases, and more. According to Spin Master, sensors in his nose allow him to react to his surroundings and kids can train him to sit, speak, and perform tail whips. His eyes even change color to let you know his mood. In addition, Zoomer Dino is rechargeable via a USB cable. But you’ll still need batteries for the remote control.

And girls can now have a teacup sized Zoomer Zuppie that matches their own personality and style. Each of the seven Zuppie pups has its own name and style. The toy features iconic LED eyes has five ways to play, including interactive moods, touch sensors, a music player, mini games and poseable legs.

Spin Master sees a new trend emerging where physical toys are brought to life in digital worlds such as via video games and your mobile phone. One of Spin Master’s latest toys in this category is TechDeck: A skateboarding video game that interacts with a physical skateboard which is scanned into the game.

And Chatsters: Spin Master’s newest interactive doll talks, walks and even “thinks.” The animated doll will come to life as you interact with Chatsters using the included accessories and her touch-sensor glasses. Six of her accessories, like her pet puppy Sprinkles, are equipped with a microchip that allows Chatsters to recognize and respond to them. And the doll’s glasses are comprised of a pair of high-resolution LCD screens that feature animated eyes, mini games, and makeover activities. Chatsters owners can download the free companion app to call and text the doll.

Harary says that Spin Master will continue to explore opportunities and threats in the 3D printing space. But the company sees the ability to print 3D toy parts as more of an opportunity in the long-run. Spin Master already sells downloadable files to compliment some of its toys.

In the wearable tech space, Spin Master is already offering toys like Spy Gear which lets your six-year-old and older kids play “secret agent” with the use of night vision goggles, a recording pen, spy watches and more.

We’ll have to see where toy technologies go beyond these latest innovations. And Canada’s Spin Master toys will definitely be a contender to watch. Seen some cool toy technologies? Let us know about them.