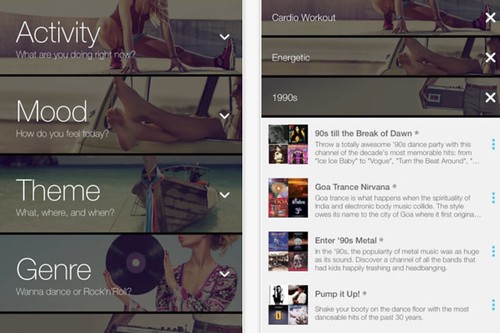 The company, best known for its audio music television channels, is increasingly expanding into mobile but it still sees traditional TV as a growth market.

At the end of May Stingray went public, raising $140 million through an IPO.

Becoming a public company wasn’t originally in the plans, says Péloquin. But when an early investor wanted to sell, the company started weighing its options and an IPO starting to look increasingly attractive.

“As of June 3 we had no debt,” he says. That’s significant for a company that’s made acquisitions and consolidating a marketplace a big part of its strategic plan.

Since it was founded in 2007, Stingray has made 19 acquisitions, that left it with different operating names in different countries. Over the past year, it’s rebranded all of its operations under the Stingray name, dropping brand names like Galaxie.

In late August it launched Stingray Vibes, a music streaming service available as a TV or mobile app. While it’s free, it’s only available to people who subscribe to a TV provider that offers the Stingray TV channels.

“We said we need to go deeper in our content,” says Péloquin. While the company’s TV channels were generally broad, the new ones are filtered “by activity, themes, era, music genre and mood.”

On some providers, the Vibes channels will also be broadcast on TV.

For app users, Stingray has a unique way of authenticating that they have a valid TV subscription – it uses an audio watermark technology embedded in all of its TV channels.

“We’re the only TV channel, whether audio or video,” Péloquin says, “that allows TV subscribers to access an app based on authentication through their TV speakers.”

Singray, which is active in 127 countries, isn’t just seeing growth in Latin and South America, it’s currently expanding its business to the Middle East and it sees room to increase its market share in the United States.

Still, it is trying some new things. Stingray recently signed a deal with Videotron, a Quebec-based telecom company, that will see all Videotron’s wireless subscribers get free access to the Stingray app. Rather than have customers pay for the service directly, Videotron will pay Stingray.

It’s a different model than the one used by other music streamers and one that Péloquin believes could help set it apart from the competition.

That $140 million IPO, gave Stingray one of the largest market exits (an IPO or acquisition) by a Canadian tech company this year.

It’s one of the companies that will be celebrated tonight at the Spotlight Awards, which recognize Canadian businesses that have had market exits valued at over $100 million or are valued at over $1 billion.