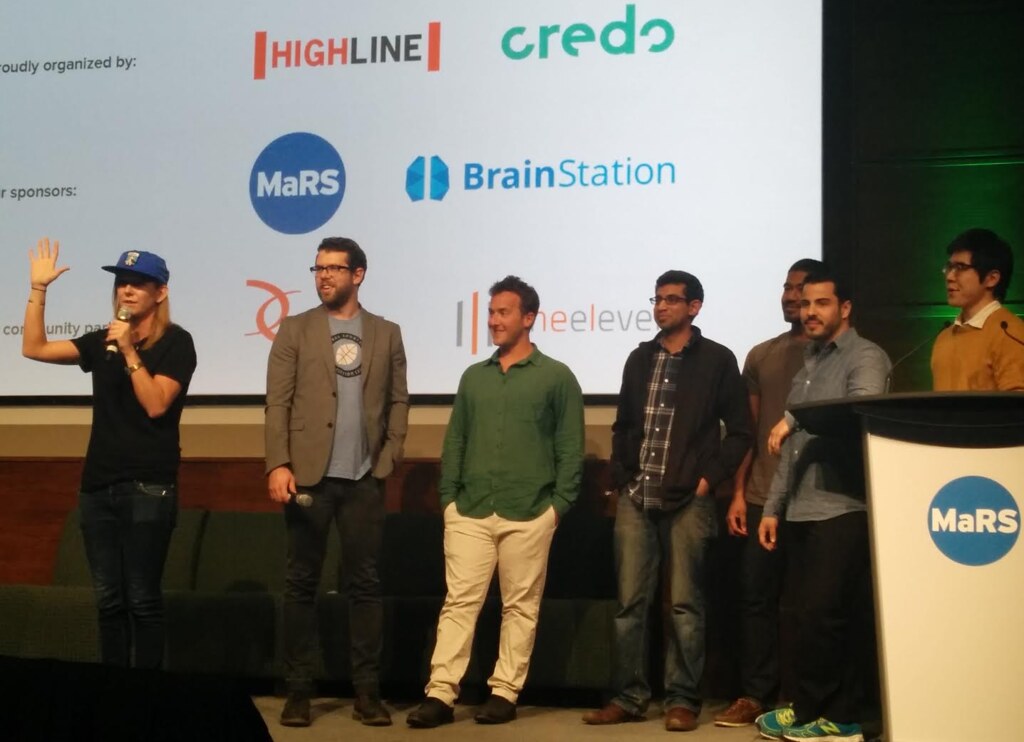 The auditorium was packed at the MaRs Discovery District in Toronto as at least 400 people came out for TechCrunch’s Meetup + Pitchoff, where startups had a chance to pitch in front of judges, with time for networking at the end of the pitchoff.

The meetup comes a day after they hosted a similar event in Montreal, and marks the first time that they’ve been in Toronto in two years.

During the pitchoff, which was hosted by TechCrunch writer Jordan Crook, eight startups got the chance to pitch their companies in 60 seconds while five judges, which included local venture capitalists and TechCrunch writers, asked them questions to help them prove that their product was viable. In at least one case, the judges and Crook even gave a founder advice on how to approach their product.

With a supply beer and salty chips abound, the atmosphere of the event was casual and conversational, with mandatory Canadian jokes thrown in for good measure from Crook. A few founders got creative with their presentation – Ticket Warrior, an app that lets users take pictures of parking tickets that are sent to a paralegal team to fight on your behalf, saw one of their founders decked out in a Mario outfit while riding a go-kart, with another chasing him in a police officer uniform. A founder of Joyride, a bike-theft tracking device, saw one founder jokingly saw a bike while in a  bandana and sunglasses during the pitch.

Though the vibe was fun, the judges did ask serious questions. When Jane Lee took the stage to pitch Uplifter, an app that’s supposed to act as a brain-training tool for emotional health by using positivity exercises, the judges asked her what she would do to circumvent the fact if her product was promising to help people reduce depression, how would they prevent their product from being labeled an actual medical tool?

Crook even stepped in and told her that medical tools need FDA approval in the United States, which might be a hurdle in the creation of their app. She then made an interesting suggestion: “Do you have built-in social?” she asked. “If you add in social in some way where people can reach out to their friends and share a quiz or exercise, it stops being so ‘curish’ and starts being more of a social network for people who want to feel better. That can get you out of that trouble.”

In the end, only three startups could win. The third place winner and audience choice – who received one ticket to TechCrunch’s Disrupt event in New York – went to Endy Sleep, a startup that offers high quality mattresses online for low prices because they sell directly to consumers.

The first prize, of course, was the most coveted – it included two tickets to Disrupt and also a table at Startup Alley, an area of Disrupt where startups can pitch to people walking by. If startups in the Alley are good enough, they can get voted into the Startup Battlefield, where 15-30 early stage startups pitch to judges on stage for the chance to win a $50,000 prize.

That honour went to ROSS, a digital legal expert built on top of Watson, IBM’s cognitive computer, which allows lawyers to ask it legal questions and receive a cited answer complete with readings from case law, legislation and secondary sources.