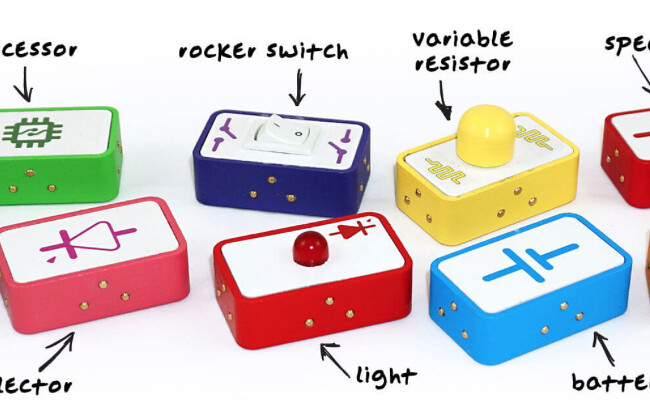 It was a good night for MakerBloks.

The Montreal startup that wants to teach kids how to make their own circuits was the winner of the pitch competition at the first ever TechCrunch meet-up in Montreal.

For the eight startups that had the chance to pitch at the Wednesday-evening event, it was undoubtedly good exposure; over 900 people were there.

MakerBloks makes magnetic blocks that can be arranged to create circuits and build different electronic devices. Founder Francois Poirier, a former product designer for toy-maker Mattel, got some tough questions from the judges about his plan to target the maker community, potentially limiting his market, but it wasn’t enough to dissuade them from giving him first prize.

MakerBloks plans to take the next step on May 12, when it intends to launch a Kickstater campaign to fund its first round of production.

Also drawing praise was runner-up OfficeVibe, a survey platform that allows companies to measure employee engagement.The startup, which sends questions to workers on a weekly bases has already received $1 million in funding and has customers in 44 countries. Ebay is currently a trial customer.

Rounding out the top three was GradeSlam, an online platform that pairs students with tutors. The site, which launches on April 7, will provide tutors on-demand 24-hours a day and bill by the minute at a rate of $25 an hour.

It wasn’t just the winners that showed strong potential. Several other startups that pitched also had some pretty interesting ideas.

Ottawa’s BitAccess says it’s the only company that manufactures and develops software for Bitcoin ATMs. Even though it was pitching, it’s already doing pretty well with 91 on locations on four continents and thousands of dollars flowing through its machines daily.

Of all the startups pitching, Gamerbet’s Cory Kennedy-Darby was definitely the most confident.

His startup is the process of launching a online betting platform for so-called “e-sports.” While the platform has been online for four months, it doesn’t yet have a license to take real bets so users have been limited to making “for fun” bets.

Still, that wasn’t enough to impress the judges.

Also interesting was Phazon, a startup that’s developing waterproof wireless earbuds that apparently can be worn while swimming (they use Bluetooth – so while it might be fine in a backyard pool they probably don’t have the range for swimming laps in a full-size pool).

The product will launch on Kickstarter later this spring.